Stop it Down. Just a Bit.

If you read much that I write, you know I love’s me some wide-aperture prime lenses. I like the narrow depth of field that isolates my subject, and the ability to shoot in low light.

More than anything else, though, I love a nice sharp lens with superb resolution and excellent contrast. A lot of people I know shoot their wide-aperture primes wide open all the time (“That’s why I bought them!!”, they say). They realize they’re giving up some sharpness doing that, but most of them aren’t sure how much. I usually shoot mine stopped down just a bit, but I have to admit I wasn’t really sure how much sharpness I was gaining. So I thought maybe I’d investigate that.

The truth is wide-aperture primes are usually not exceptionally sharp wide open. They appear to be sharper than they really are because the in-focus subject stands out so much from everything else (assuming the subject is near the center) given the narrow depth of field wide open. But if you measure the absolute resolution numerically, a prime lens shot at f/1.4 is no sharper (and in many cases less sharp) than a top quality zoom shot at f/2.8.

Let’s look at a very good wide-aperture prime, the Canon 35mm f/1.4 “L” lens. Here are the Imatest results for fifteen Canon 35mn f1/.4 lenses measured at both f/1.4 and f/2.8 apertures. (The number on the vertical axis is the MTF 50 weighted average for the entire lens, that on the horizontal axis is MTF50 at the center point). 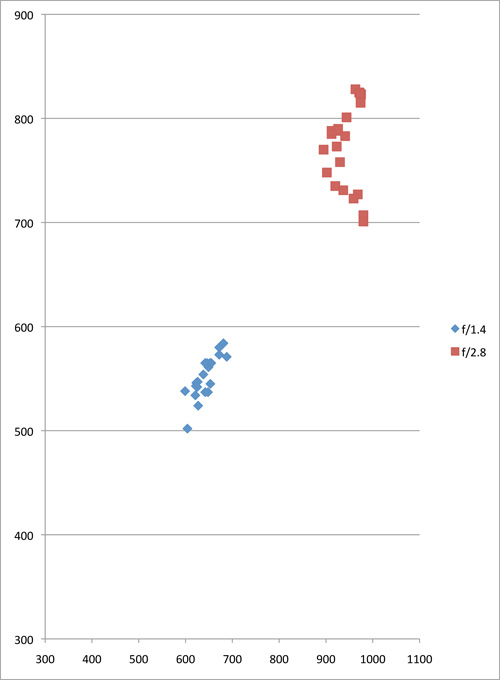 At f/1.4 (blue diamonds) the lens is very good for a wide-aperture prime. But for a reality check, the 24-70mm and 16-35mm f/2.8 zooms both have higher resolution (shooting at f/2.8, of course) than the prime does shooting at f/1.4. But when the 35mm is tested at f/2.8 (red boxes) it is much sharper than either of the zooms. (I didn’t want to crowd the graph, but if I had put numbers for the two zooms at 35mm, their dots would have filled the white space between the two groups above.) 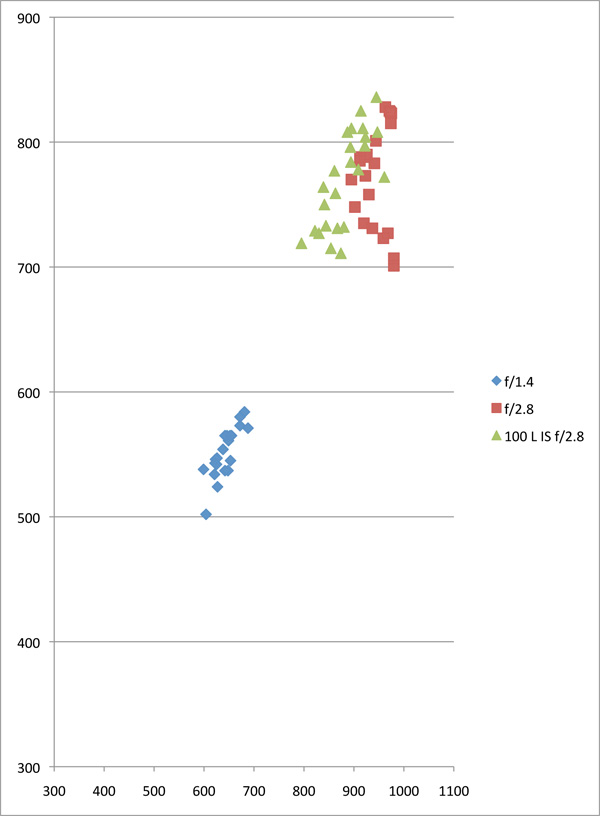 What about other lenses?

Well, that was really useful for those of you who shoot Canon 35mm f/1.4 lenses. But there are probably a couple of you out there who shoot other prime lenses. Since I’m supposed to be using our optical testing equipment to make sure our rental lenses are working properly, I don’t really have time to perform MTF tests for every lens at various apertures (at least not until I finish testing another 2,500 more rental lenses).

Luckily a number of thorough and reputable review sites do evaluate lens MTF at various apertures and publish their results. I love it when other people have already done the work for me.

Since most reviewers test just one copy, and copies of lenses vary, I don’t take any single review as gospel. Testing methods of the various reviewers differ slightly, too, as does their data presentation. And, of course, not every lens has been tested by every reviewer. But I’ve gathered data from the following review sites: DxOmark.com, SLRGear.com, Photozone.de, and DPReview, compared their results as best I could, and tabulated the average findings below.

When there was a big disagreement between the various reviewers, I’ve listed a range. But for most lenses they generally agreed and I  averaged out their results as a single number. Take the numbers as estimates: in some cases the site doesn’t present actual MTF or Blur Index numbers, so I’ve taken the data from their graphs. But overall, the agreement between the various reviewers was pretty reasonable.

The variation did surprise me: there are some lenses that benefit hugely by stopping down, others barely at all.

So, What’s the Point?

Like all tables, the one above compresses the data quite a bit. You might want to visit the various websites to get more detail on your own lenses. But in looking at the data I reached several conclusions:

Of course, stopping down the aperture counteracts the narrow depth of field that wide-aperture primes offer, to some degree. But by how much? Well, the simplest and most accurate answer is “get a depth-of-field calculator for your smartphone”. Once you use one for a bit you’ll wonder how you ever got along without it.

The takeaway pont, though, is for many wide-aperture primes, stopping down slightly, just to f/2.0 or so, will dramatically increase resolution. For others, stopping down makes little difference, especially in the center of the image. Like everything else in photography, the more you know about the specific lens you are shooting with, the better you can use it.

Tweet
Posted in Lenses and Optics
Are Zooms Always Sharper at One Extreme or the Other?
Sharing a Good Read