It’s been kind of an exciting couple of weeks, with 3 major new SLRs released and a couple of more on the way. There are plenty of people out there who are doing in-depth reviews, touting the greatness of the new cameras, and trashing them online without having touched one (My favorite so far is the guy who, after looking at online jpgs, stated it was obvious that the 5D Mk III and D800 weren’t a bit better than his T2i, so he wouldn’t be upgrading). I don’t have much to say regarding image noise, ergonomics, autofocus accuracy, image processing, etc. There are plenty of people doing that more thoroughly and accurately than I could.

But there was one question that was really eating my lunch and I was in a position to take a look at it: just how much better would the Nikon D800, with that gazillion megapixels, really resolve? Would it be 3 times better than a D700, and 50% better than a Canon 5D Mk III, which the pixel count would suggest? Would the lenses we have really be able to take advantage of that resolution? I wasn’t sure.

So when we got a bunch of Canon 5D Mk III’s and a few Nikon D800s in last week and I was able to divert a few over to our Imatest lab for a few hours. There wasn’t enough time to do exhaustive testing (generally the cameras arrived at 10 a.m. and had to be in packing to ship out by 3 p.m.) but I was able to get enough done to make some preliminary observations.

I arbitrarily chose two lenses to do the camera comparisons: the Zeiss 100 f/2 Makro Planar and Zeiss 25mm f/2.0. I chose Zeiss lenses because it let us put identical lenses in front of both Canon and Nikon cameras. These two particular lenses because both are exceptionally high resolution lenses and I wanted to be able to test at two different focusing distances, since that could make some difference. The copies used for this test had previously been tested and were known to be excellent and free of optical issues.

We tested each on D800, 5D Mk II, and 5D Mk III cameras (and one run on a D700 just for comparison). Otherwise things were kept as equal as we could make them: lighting and setups weren’t changed, etc. Time constraints prevented doing what I would have loved to do: testing a half-dozen copies of each lens on a half dozen copies of each body. But this should be fairly accurate.

I should note that we initially ran the Canon files through DPP to convert the raw images, since Imatest can’t directly convert the 5D Mk III files yet, but the results we got showed DPP was obviously doing some manipulation to the files as it converted them, making the results invalid for comparison since we test on unsharpened raw images. We then used Adobe’s DNG converter which handled the files with no problems and didn’t manipulate them at all, so we used RAW-to-DNG conversions for all the cameras to make sure things were equal.

The Zeiss 100 results first. The Vertical axis is the peak (center) MTF 50 (in line pairs / image height), the Horizontal axis aperture, and the cameras identified in the legend. The D700 and 5D Mk II results agree exactly with what we’ve seen testing these combinations for several months. 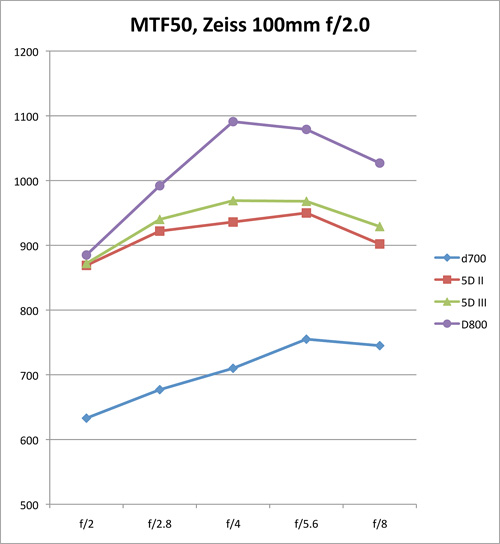 Results with the Zeiss 25mm f/2.0 lens were very similar. I left off the D700 after the first test. I saw no sense beating a dead horse and, as I mentioned, time was short. 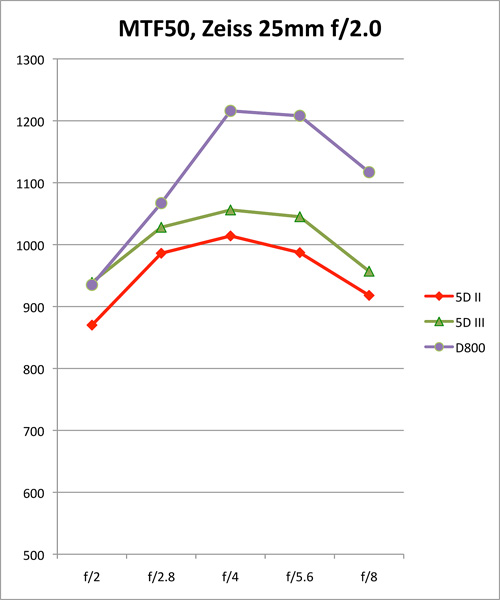 The results certainly weren’t surprising: I expected the 5D III to be a bit better than the II and it was. I expected the D800 to be better than any 35mm camera we’d tested, and it was. Previous, only the Leica M9, with its no-AA-filter, CCD-sensor, using the $6,000 Leica 50mm f/1.4 Summilux lens and gets up in this range among 35mm cameras. For the couple of people, though, that seem to think the D800 is a medium format camera in 35mm clothing, I would point out that a Hasselblad H4D-50 with kit lens tests out at about 1,600 lp/ih, so no, we’re not quite there yet.

The above results are taken at ISO 200 which should theoretically giving best, or near-best, performance for each camera. I was curious how the D800’s resolution would hold up at higher ISOs so I repeated the ZF 25mm on D800 series at ISO 400 (where I do most of my shooting – it’s my test after all) and also at ISO 1600 and ISO 3200. 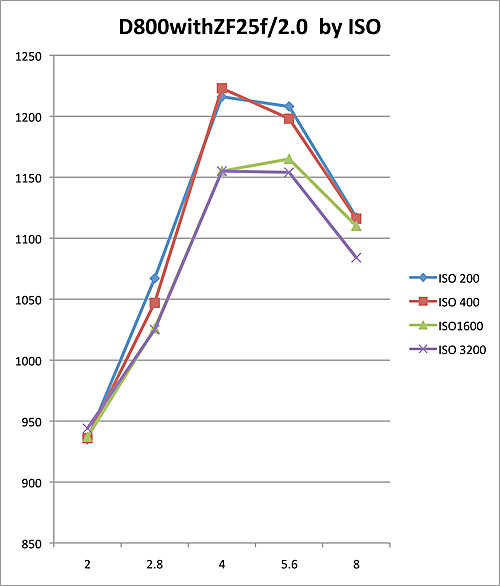 Again, this is done from raw images with no (as best I can determine) post image sharpening, although you can never be sure what is happening in-camera. But at any rate, there really is an amazingly small amount of resolution fall off at reasonably high ISOs. I was really surprised at this, especially at how well 3200 compared to 1600. Obviously I should have gone further, and need to do the same comparisons for the 5DIII, which I should get to next week.

Ah, now that is the question. At least it’s the question now. Lloyd Chambers had already mad some good suggestions for Zeiss and Nikon lenses that should be able to handle the D800’s resolution based on his experience. I’m not sure I agree with all of them, but it’s certainly the best starting list. I plan on testing each lens on the D800 and getting a list of our own together, but I was able to get some of the usual players tested before the last D800 left the shop. 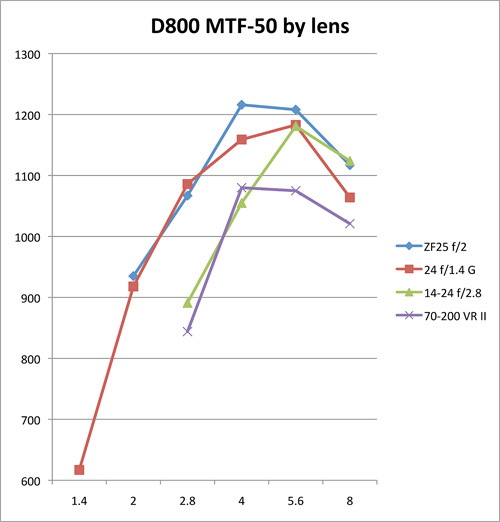 The second plots average resolution of the center, halfway to the corners, and corner MTF 50.  It becomes apparent that center resolution doesn’t mean corner resolution: the 70-200 VR II does much better in the corners than the 24 f/1.4. The Zeiss 25mm does superbly well, but I should point out that this lens seems to do it’s best work at close and medium distances (like where it is when we do Imatesting) and may not be as good at infinity. 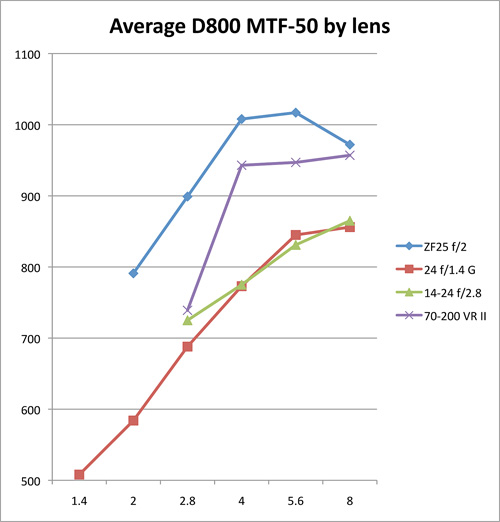 Obviously, there are a lot more lenses that we’ll need to test just to make recommendations based on resolution. The only message I think to take away right now is that the D800 is playing up in the range of maximum resolution of even the best lenses. Putting anything less in front of it is going to limit the camera.

For the fanboys who don’t like the results: This concludes our test of the Emergency Resolution Testing Service. This was only a test.  If this had been an actual Fanboy emergency you would have been instructed where to tune in your area for official Fanboy disinformation and complete manufacturer sponsored reviews.

For everyone else, there’s no question the D800 can actually get those pixels to show up in the final product (assuming your final product is a big print – they’re going to be wasted posting on your Facebook page). But you’d better have some really good glass in front of it if you want to demonstrate all of that resolution.

In the real world, highest possible resolution is nice to know about and talk about, but usually not of critical importance compared to other factors. You’ll be able to make superb images with any decent lens for an 8 X 10 or even 11 X 16 print. But if you’re getting the camera because of the resolution, it makes sense to know which lenses will allow all of that resolution to be utilized. Just in case you get that job that needs billboard sized prints.

Tweet
Posted in Recommendations
What I Did Over Winter Vacation
Hammerforum.com