Photo Geek Awards Get No Respect

When I came up with the idea for the Photogeek Geek Photo Contest, it was mostly for fun. I didn’t think too many people would actually enter. But at last count there are nearly 100 entries up on the contest page already. There are even a couple of people who managed to capture the bokeh of a bouquet of briquettes in a bucket. And those aren’t even the geekiest images.

I was so impressed by the sheer number of entries that I said to myself (since nobody around here listens to me, I usually say things to myself), “We really need some trophies or plaques, too. Sometimes prizes alone just aren’t enough.”

So I did some extensive design research and came up with what I thought would be a truly impressive trophy that any Geek would be proud to display. Something reflecting the serious and worldwide nature of this contest.

They were delivered today: A cleverly designed hollow orb cast from rare polyethylenes from mainland Asia, coated with solid gold colored paint from South America. Suspended in the center by a hook of tin mined in Africa is a hemisphere of purest optical glass, originating in Europe, but carefully cast by artisans in Japan and coated with fluorite from the American water supply. (No wait, that’s fluoride. I’m not sure where fluorite came from.) Just to make it even more appealing, the trophy was 85% recycled materials by weight, making it environmentally friendly.

In other words, I found these little trophies at the shop across the street that were on sale really cheap, and they were the perfect size to suspend some of the dozens of used Canon 24-70 f/2.8 Mk II front elements we have sitting around here (because those suckers get scratched ALL the time and we have to replace a lot of them). It actually looks pretty good, too: 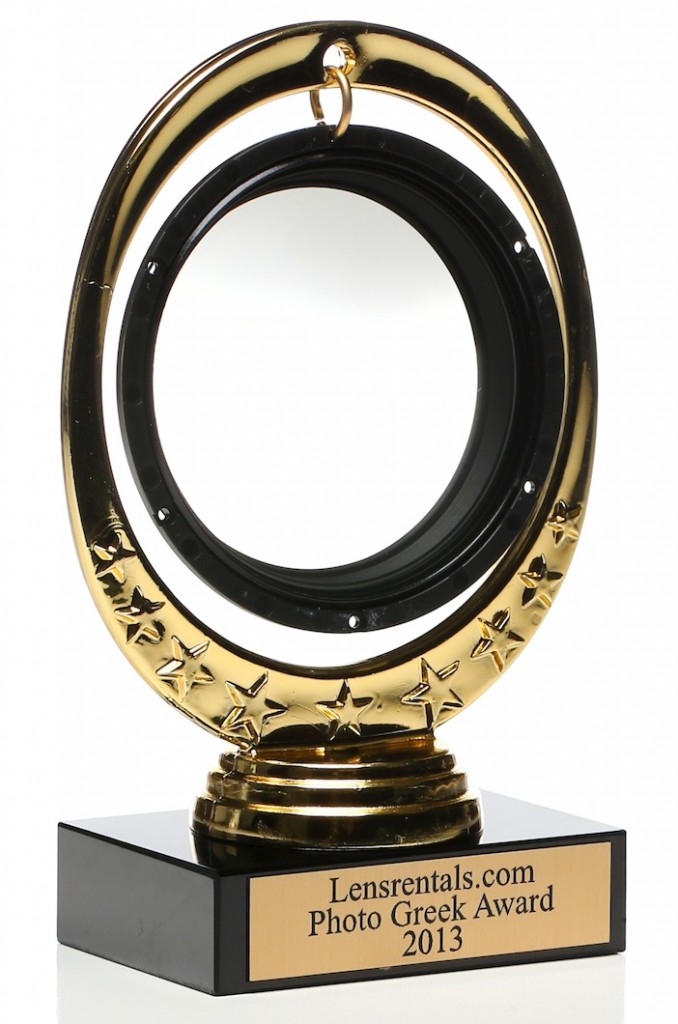 But, like Rodney Dangerfield would say, we Geeks get no respect. The engravers at the trophy shop apparently used their iPhone spell-checker on “Photo Geek” and decided “Photo Greek” was the proper way to go.

My first thought was to make up something about loving Greek photography and give a trophy to everyone from Greece who entered. But no one from Greece has entered so that idea isn’t working well.

My second thought was that this is symbolic. It’s symbolic of the way we geeks are misunderstood, even ridiculed, by those who don’t realize the importance of our contributions. It’s also symbolic of the fellowship of Photogeeks. I remember in college all of the popular people (I didn’t really know any of them, but I met some when I took easy courses to pad my GPA) used the term ‘Greek’ to signify a member of one of the numerous fraternities that I wasn’t invited to join. So this becomes symbolic of our fraternity, the fraternity of Pixel Peeping PhotoGeeks. I guess we’d be Phi Phi Gamma.

Not to mention, leaving the award as it is saves me about $3 a trophy for re-engraving them. That’s the difference between a nice lunch out on Friday and bringing a sandwich from home.

So there you have it. The Photo Greek Trophy for Photo Geeks will be given to selected participants in the Photogeek Geek Photo Contest. (They only had 6 trophies at this price. The full-price ones are wayyyy more expensive.)

Oh, yeah. This is also a reminder that you have two (2) more weeks to enter the contest by sending your entry to contests@wordpress.lensrentals.com. And be sure to drop by the contest page  and look at the entries – the competition is fierce, and the comments are fiercely funny and worth a read.