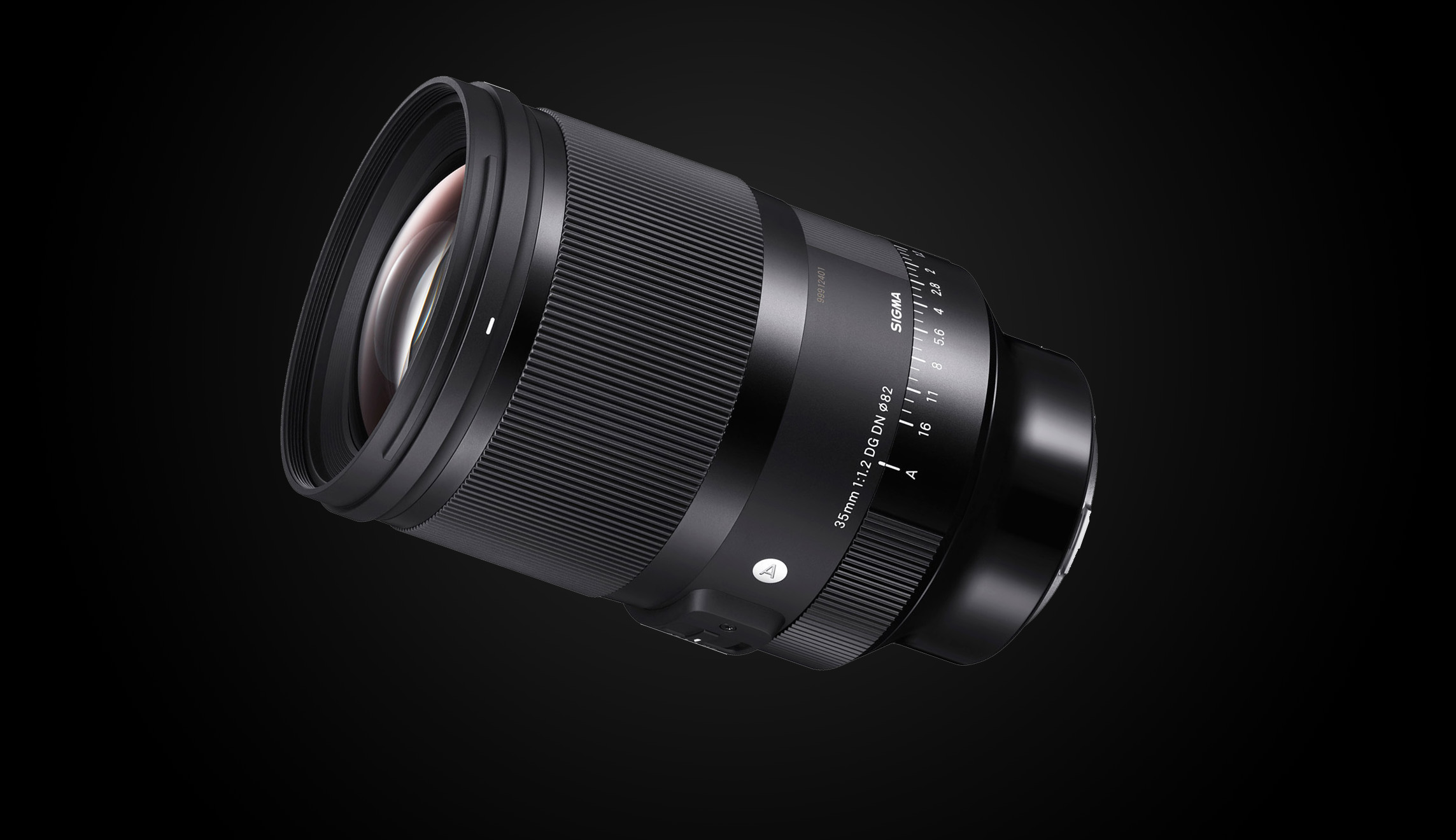 We just finished testing a couple of 35mm prime lenses and came away quite impressed. But it took a little longer to finish testing the one everyone had been asking about; the Sigma 35mm f/1.2 DG Art lens. I declared the Tamron 35mm f/1.4 SP the sharpest 35mm lens we had tested just a week ago, so we were all curious if that title would hold up after the Sigma was tested.

So curious, in fact, that I broke the MTF Testing Rule I Always Refuse to Break. I actually tested the Sigma at both f/1.2 AND at f/1.4. Why did I finally break the rule? Cause I wanted to. Will I break it again, if you ask nicely, have a really good reason, and are on a Holy Quest? Nope.

Let’s take a second to do a quick comparison of the Sigma f1.2 with other 35mm wide-aperture prime lenses (including some for other mounts, because a lot of people are shooting other mount lenses on Sony cameras).

Obviously, if the widest aperture isn’t that important, the Sony FE 35mm f1.8 provides a much smaller lens with great image quality at a cheaper price. A lot of you may not realize the Sigma 35mm f1.4 Art is the least expensive option, yet still provides superb resolution. The Tamron 35mm f1.4 SP was recently declared (by me) to be the resolution champion at this focal length and is an awesome bargain at its price.

For an f/1.2 lens, the MTF chart is really, really good. Center resolution is excellent. Away from center resolution is well maintained, although, there is some sagittal and tangential separation, which indicates either a bit of astigmatism or lateral color. This is expected in very wide-aperture lenses, though, and it isn’t severe. 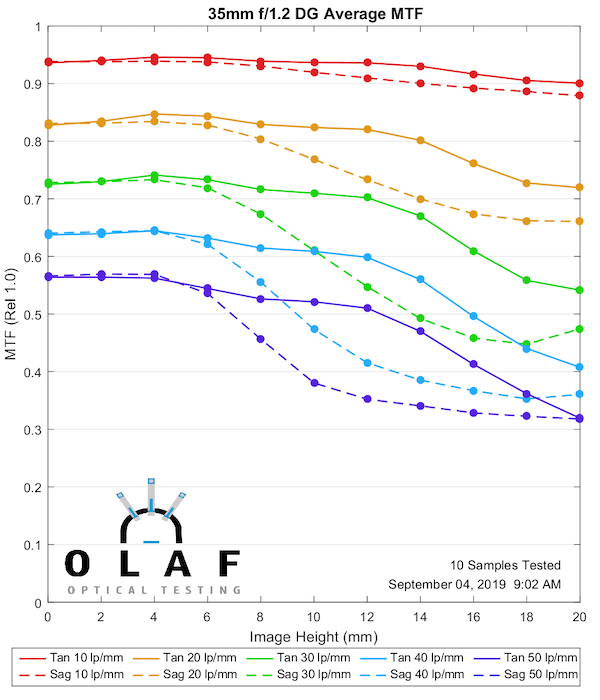 Since we’re all used to looking at f/1.4 MTF charts, it’s worth pulling up some other f/1.2 comparisons to show just how sharp this is for an f/1.2 lens. The only other 35mm f1.2 I have data for is the Voigtlander Nokton 35mm f1.2 Mk II. The Voigtlander is an older, smaller, less expensive, manual focus lens so we didn’t expect it to keep up with the Sigma; and it doesn’t. 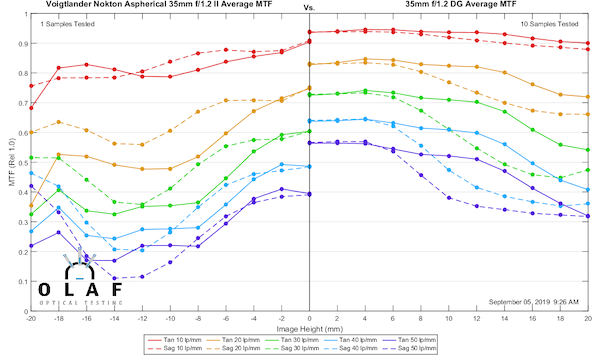 The classic old Canon 50mm f/1.2L is an f/1.2 lens and while it’s obviously not a 35mm focal length, it’s still worth a comparison. It was never considered a sharp lens, even back in the old days, though. (And before you ask, no I can’t test the RF 50mm f/1.2 yet, so I don’t have that logical comparison available.) 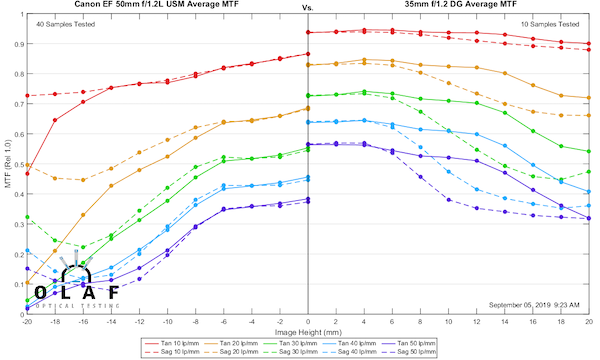 The sharpest ultra-wide aperture lens that I had tested (before now) at f/1.2 was the Leica Noctilux-M 75mm f/1.25 ASPH. Despite the Leica’s $12,000 price tag, the Sigma is indeed sharper. I was honestly a little surprised at this. 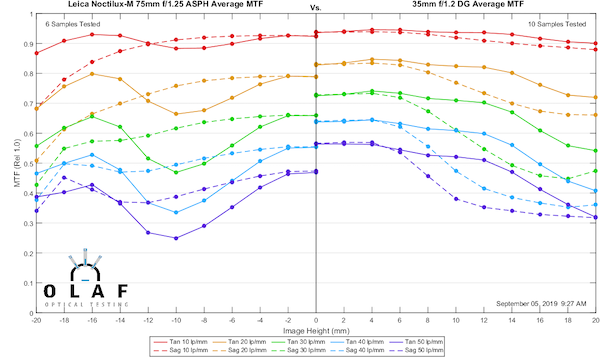 So I think we’ve settled the question as to whether the Sigma is the sharpest f/1.2 that we’ve tested. (From computer-generated MTF charts I do think the Canon RF 50mm f/1.2 will test sharper, but, as I said, I can’t test it yet.)

I Know What You’re Thinking 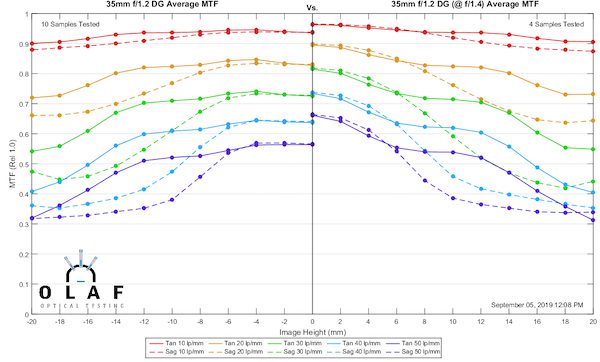 Just slightly stopped down to f/1.4 we have a significant improvement in resolution in the center of the image, but not much change in the outer half. (For those of you who think ‘stopping down improves things everywhere’; no it doesn’t. It’s specific to each lens and depends on which aberrations the lens has. Some lenses sharpen up all over, some in the corners first, some in the center.) 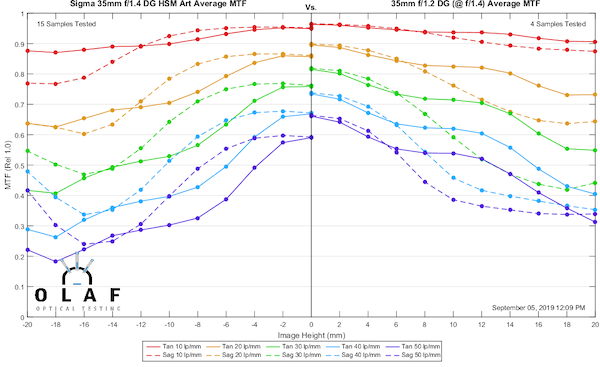 The Sigma 35mm f1.2 DG Art is clearly a bit better than the original f/1.4 Art. It is a newer, larger, and more expensive lens. But, I honestly thought the f/1.2 lens would be less sharp than the f/1.4 before doing this test. Because historically f/1.2 lenses have been.

So now the question becomes, is it as good as the Tamron 35mm f1.4 SP, the lens that just 10 days ago I declared the sharpest 35mm we’ve ever tested? 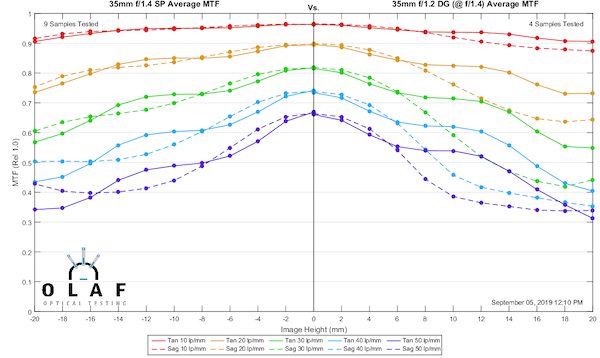 Well, it’s a dead heat in the center. Away from center, if I split a few hairs, the Tamron is a little sharper and it clearly has less sagittal-tangential separation. So the Tamron retains its title of sharpest lens in the Welterweight division.

This is where you ask me ‘could we see that difference in a photo’? Nah. The two lenses would render differently, perhaps have a slightly different color cast you might notice, etc. But even in a large print with a magnifying glass, you couldn’t say one is clearly sharper than the other.

We showed one important thing here. If you want to shoot a 35mm f/1.2 on a Sony camera, the Sigma is a superb solution. Unlike most ‘ultra-wide’ aperture primes, you don’t pay any sharpness penalty to use this lens. That is truly unusual, f/1.2 lenses are expected to be less sharp at the same aperture than f/1.4 lenses.

It’s actually a bit better than ‘as good as’. The Tamron 35mm f1.4 SP is a tiny bit of hair-splitting, pixel-peeping sharper. But the Sigma 35mm f/1.2 is only available for FE and L mount cameras, and the Tamron isn’t available in FE mount (although I’m sure some people will be shooting in with an adapter on FE cameras).

As always, I’m only testing optical resolution. But assuming the AF speed and accuracy, the bokeh, rendering, and other important aspects of the lens please you, this is the sharpest 35mm wide-aperture lens you can natively mount to your Sony camera, and it’s a wider aperture than any of the others, too.

If you don’t care about f/1.2, then the Tamron on an adapter (if you’re an adapter person) is awesome, smaller, and less expensive. The Sony FE 35mm f1.8 will probably be the most popular of this recently tested group; it’s small, native, and reasonably (but not cheaply) priced. The Sony FE 35mm f/1.4 ZA is also a lens that exists, although I can’t imagine anyone is considering buying one.