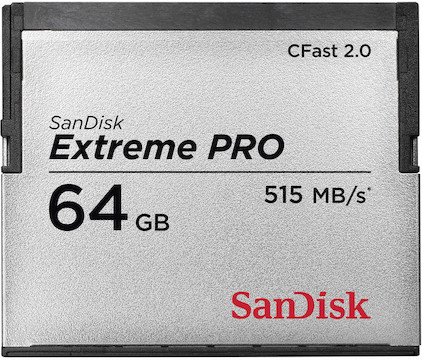 While we no longer rent this product, we do carry the SanDisk 512GB Extreme PRO 525MB/s CFast 2.0. Additionally, you may find alternatives in the Recommended section on the left-hand side of this page.

The SanDisk 64GB Extreme Pro 515MB/s CFast 2.0 is an ultra-fast memory card designed for 4K video cameras that use the CFast 2.0 format. Key features include:

CFast Format. This memory card format is a pinless design that offers extremely fast read and write speeds. Seeing as it’s an entirely different format, this card is only compatible with CFast-capable camcorders.

CFast 2.0 Reader Required. This card requires a CFast 2.0 reader to interface with your computer. If you don’t have a reader, you won’t be able to transfer your footage off the card.