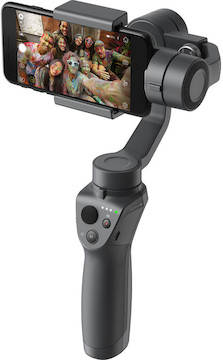 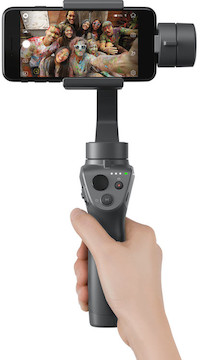 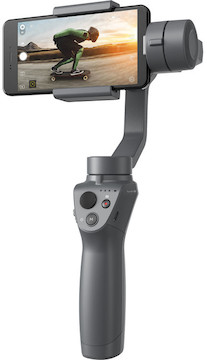 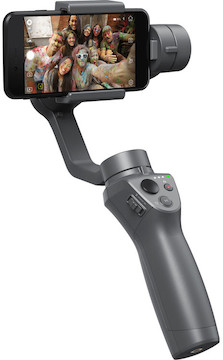 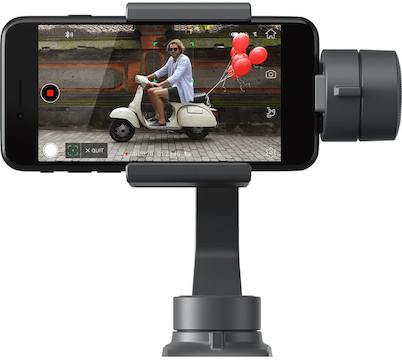 While we no longer rent this product, we do carry the DJI OM 4 Smartphone Gimbal. You may also find alternatives in the Recommended section on the left-hand side of this page.

The DJI Osmo Mobile 2 Smartphone Gimbal is a handheld three-axis smartphone gimbal solution with an exceptionally long maximum battery life. For an updated model, check out the DJI OM 4 Gimbal. Key features include:

What’s New? The DJI Osmo Mobile 2 Smartphone Gimbal retains most of the features its predecessor had while offering myriad improvements. These include up to fifteen hours of run time; a new USB port that lets you charge your phone off the gimbal’s battery; expanded motion ranges; a 1/4"-20 female threading on the base; portrait-orientation support; and simplified controls. It’s not all good news, though. The Mobile 2 lacks the original DJI Mobile’s rosette mount, so it’s incompatible with most Osmo accessories. Additionally, its battery is built in, so additional batteries aren’t available.

Extended Run Time. The new battery powers the Mobile 2 for up to fifteen hours, which is triple the time of the original Osmo Mobile. On top of that, you can use the gimbal’s USB port to charge your phone. This all gives you the freedom to live stream or shoot time-lapses without worry.

ActiveTrack. The Osmo Mobile 2’s ActiveTrack function allows you to select a portion of the screen, lock on to it, and track the camera’s movement to follow the subject you selected.

Gimbal Configurations. The Osmo Mobile 2 can be used in Landscape, Portrait, Underslung, or Flashlight Mode. Underslung mode allows for low-angle shots, Flashlight mode works with the entire unit in a more horizontal configuration, while Landscape and Portrait modes allow you to adapt the phone’s orientation.

Shooting Styles. You can add pans and tilts to time-lapse shots—no special equipment required. It’s as simple as selecting the position where the camera movement will start and then where you want it to stop. If you want to take an epic panoramic image, the Mobile 2 can stitch one together for you from nine separate shots.