Built-in 2.4 Ghz Radio Receiver. Unchanged from its predecessor, the 600EX II-RT gives you wireless triggering of 600EX-RT, 430EX III-RT, and other 600EX II-RT flashes at distances up to 98.43 feet without line-of-sight. There’s also an optical pulse triggering method for when you’re working with older-generation flashes.

Output and Operation. With the exception of continuous-flash firing, the output also remains unchanged from the 600EX-RT. You still have a 24-200mm (full-frame equivalent) zoom range, 14mm wide panel, and flash output of GN:197’ @ ISO 100/200mm.

Functionality. Similar story here—not too much has changed. You’ve got the same tilt and swivel capabilities (-7º to +90º/360º). As mentioned above, there’s now a flash-readiness indicator and improved combination button/dial operation. The flash is powered via four AA batteries (not included!) or an external battery pack like the Canon CP E4N.

Accessories Included! New to this updated version are included hard-type bounce and color-filter adapters. Along with the flash, all this fits in a less-camera-bag-friendly pouch. Sorry! 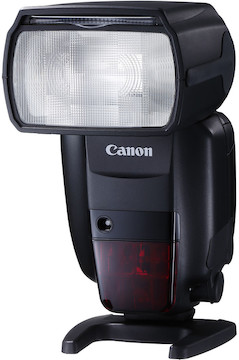 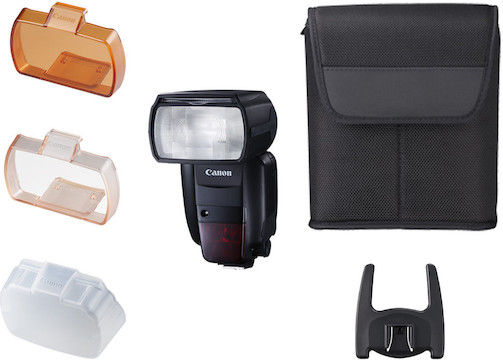