The Canon ST-E2 Speedlite Transmitter is a wireless flash controller that can fire up to three secondary groups with variable output ratio up to 8:1. We also carry the newer ST-E3-RT. Key features include:

E-TTL II Compliant. The Canon ST-E2 Speedlite Transmitter is fully E-TTL II compliant and can control 580EX (II), 550EX, 430EX (II), and 420EX. While it provides wireless E-TTL II functions, it can also be used to simply trigger secondary flashes with the flashes set to manual power. The ST-E2 also emits an AF-assist beam. It’s significantly smaller and lighter than a flash, so it’s a good choice if you just need a focus assist.

Infrared Triggering. It uses IR pulses to trigger secondary flashes, so unlike radio-controlled triggers, all flashes must have line-of-sight. Direct line-of-sight isn’t strictly necessary indoors—the pulses bounce around pretty well, moving around corners and through light modifiers like softboxes—but it’s a really good idea outdoors. Range decreases with the level of ambient IR, so trying to trigger a flash that’s sitting in direct sunlight is tricky at best.


The ST-E2 is a very useful speedlite commander unit for working with off-camera speedlites. It does require line of sight, so you’ll need to be relatively close to your off-camera flash. Also, it...

The ST-E2 is a very useful speedlite commander unit for working with off-camera speedlites. It does require line of sight, so you’ll need to be relatively close to your off-camera flash. Also, it’s not the greatest to use in outdoor conditions, so you’ll want to stick to indoor conditions with this guy. Otherwise, it’s a great option for wireless full E-TTL control of compatible Canon speedlites. 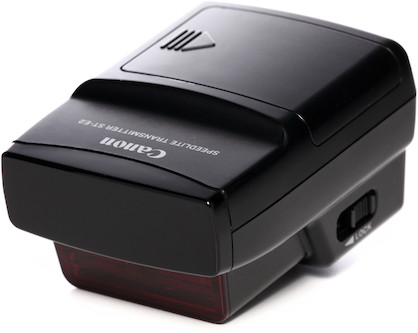