Finding an alternative to the manufacturer’s 70-200 f/2.8 zooms has become both important (as prices skyrocket) and problematic for us. We’ve had to discontinue the Tamron version because of reliability issues, so we’re going to give the Sigma a try.

This second version of the Sigma 70-200 f/2.8 zoom has an HSM motor for quick autofocus, three extra-low and two special-low dispersion elements to reduce chromatic aberrations, and new coatings to reduce flare and ghosting. It also can focus as close as one meter, allowing pseudo-macro close-ups (1:3.5 magnification).


As is often the case with alternative lenses, this one is going to be about expectations, and if your expectations are reasonable I think you’ll be pleased. If you’re expecting it to be indistingui...

As is often the case with alternative lenses, this one is going to be about expectations, and if your expectations are reasonable I think you’ll be pleased. If you’re expecting it to be indistinguishable from a $2,300 Nikon 70-200mm f/2.8 AF-S VR II, then you aren’t going to be so pleased. With this lens you get 85% of the performance for less than half the price, which is a good deal for most people but not OK for those wanting the ultimate quality.

My summary (as I like to do) first: This is a good quality lens that will give better images in tougher conditions than a consumer grade zoom. It’s sharp in the center even wide open. It also autofocuses quickly and accurately enough to be used for sports photography (a big advantage over the Tamron 70-200mm f/2.8 we used to carry).

It has some weaknesses, mostly at the extremes. It has a lot of focus shift when shooting close-up, so either shoot it wide open or stopped down to f/5.6 if you want accurate focus on objects within 10 yards or less. At the 200mm end, it’s a bit softer than at 150mm and exhibits some pincushion distortion. It also has some chromatic aberration—-not bad but apparent if you pixel peep.

For most people, this isn’t going to be a big issue, but it might be for some of you. Initially, at least, I’m quite pleased with the lens, but I strongly recommend you read the in-depth reviews in the links section before deciding if this is the lens for you.

All of that being said, from long experience I’m only going to recommend this lens if your camera has autofocus microadjustment. We will, of course, test the lens before every rental, but one thing we know is that there is more camera-to-camera autofocus variation with third-party lenses (less so with Nikon than with Canon but still to some degree). One copy of this lens may be very accurate on one camera, backfocus on another, and frontfocus on a third. 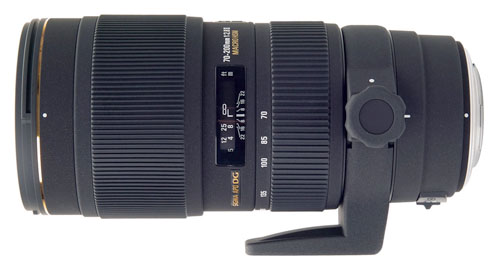