The Rode Stereo Video Mic is a shoe-mounted mic designed for dSLRs and small video cameras.

It addresses the shortcomings many have found when shooting video clips on newer dSLRs with a video feature—the quality of the camera’s built in microphone is horrid. The Rode microphone attaches to the hot shoe mount on the camera (or can be placed on a separate stand). The microphone is suspended in a shock mount to protect against movement and handling noise and provides stereo signal via a 3.5mm mini-headphone output plug. It is powered by a 9 volt battery (not included). This is compatible with the Canon 5DMkII, 7D, 60D, T2i and the Nikon D90, as well as any other camera with a mini-headphone stereo input. 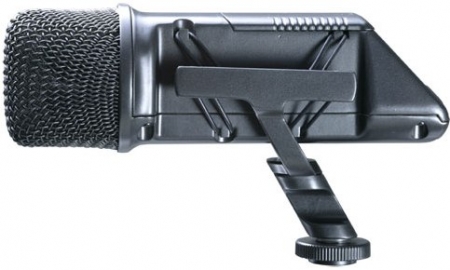