The DJI CINESSD Station (Thunderbolt 3) enables even faster download of DJI CINESSDs to a Thunderbolt 3-enabled computer for minimal downtime. Key features include:

DJI CINESSD. CINESSD is the recording media needed for DJI’s Inspire 2 drone to allow recording of 5.2K/30p CinemaDNG RAW and ProRes 4444 XQ files. This reader allows you without any additional software to transfer your recorded footage to a Thunderbolt 3 capable computer.

Thunderbolt 3 Interface. According to DJI, this reader operates at speeds of up to seven times faster than the USB 3.0 version while offering support for data writing. 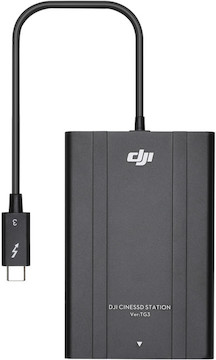