While this Metabones adapter option is no longer available for rent, here’s a link to our current selections.

Nikon G Compatibility. This adapter was designed specifically for the Blackmagic Pocket Cinema Camera. It allows you to use both G and non-G series Nikon F-mount lenses, including legacy non-AI and AI lens mounts, on the BMPCC. Due to the smaller sensor size, you can also use DX (crop-frame) lenses. This adapter is not for use with any camera or camcorder other than the Blackmagic Pocket Cinema Camera.

Wider Focal Length and Increased Aperture. This BMPCC version of the Speed Booster widens the mounted lens’s focal length by 0.58x, effectively reducing the overall sensor crop factor from 2.88 to 1.75×. Additionally, the adapter increases the maximum aperture of the mounted lens by 1 2/3 stops, with a maximum output aperture of f/0.74.

Aperture Ring. The adapter has its own eight-stop aperture ring for controlling Nikon G-series lenses without their own aperture rings. The ring also has half-stop clicks, allowing you to set it to a specific aperture. 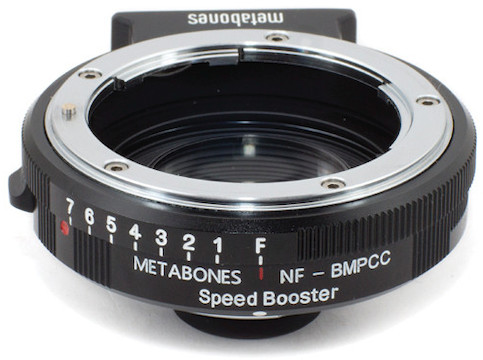