This is a six-pack of the SanDisk 128GB Extreme Pro 95MB/s UHS-1 U3 SDXC, a SD memory card that’s designed for capturing both still and video files. Key features include:

Fast Read/Write. The 95MB/s read and 90MB/s write speeds allow large amounts of data to be transferred to and from the card with minimal bottleneck. It’s fast enough for most still photography use short of extended continuous shooting. Additionally, accelerated minimum sustained write speeds prevent dropouts and stuttering making it well-suited for Full HD video recording.

Known Compatibility Issues. Not all cameras support SDXC memory. The most notable cameras that have widely reported issues are Pentax’s 645D / 645Z and Leica’s M Monochrom – Typ246. Additionally, there have been reports of compatibility issues involving memory cards with a speed class of V30 or higher and first generation Blackmagic cameras such as the Blackmagic Pocket Cinema Camera and the Blackmagic Design Micro Cinema Camera.

Warning: Just because this card is 128GB doesn’t mean you should fill it up without a backup. It’s best to not put all of your eggs in one basket! 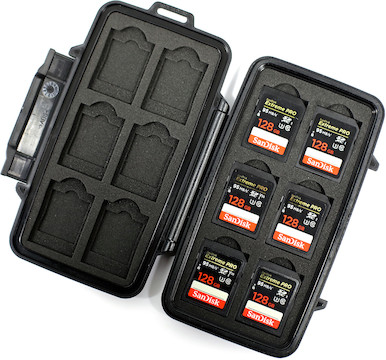