In which I begin to answer the question “Why Do You Put the Lens Diagrams on Your Website?”

Where do new lens designs come from?

I knew that today’s lenses are all designed using computer programs, but  I was surprised to find new lenses aren’t designed from scratch. Designers start with an existing lens design and modify it.  Of course, a lens designer doesn’t say “this lens really sucks, let’s use it as our starting point”. They start with a good design and try to improve it.

So camera lenses, like Darwin’s finches, obey a very strict “survival of the fittest” law. Good lenses are copied and modified (sometimes to improve them, sometimes to get around patent restrictions) until there are dozens of similar lenses marketed by different manufacturers. Bad lenses fairly quickly fade away.

Even knowing this, when I wrote a series of articles on the development of camera lenses, I was amazed to find  that virtually every camera lens in use today can trace its heritage back to one of five lenses, four of which were developed by 1900. Given the literally thousands of lenses that have been created, I found this really surprising: no matter what lens we use today it was probably available in basic form near 1900.

Does the pedigree of a lens matter?

Well, actually it does a bit. Those original lenses, in their pure form, each had strengths and weaknesses. Modern lenses derived from them have ‘inherited’ those same underlying tendencies. Many of the complex technologies used in a modern lens are put there to correct the underlying problems of the original design.

The first lenses were rather simple things. But two important principles had been discovered way before photography was even invented:

A mensicus lens (left) and an achromatic doublet

After the invention of the Daguerrotype camera lens design improved rapidly and literally hundreds of photographic lenses had been marketed by the early 1900s. Most were dead ends, but six lenses, five of which were developed by 1900, gave rise to most of the lenses we use today. The 6th lens that gave rise to the rest, the reversed telephoto or retrofocus lens, wasn’t developed until the 1920s for movie cameras and then in the late 1930s for the first SLR cameras. 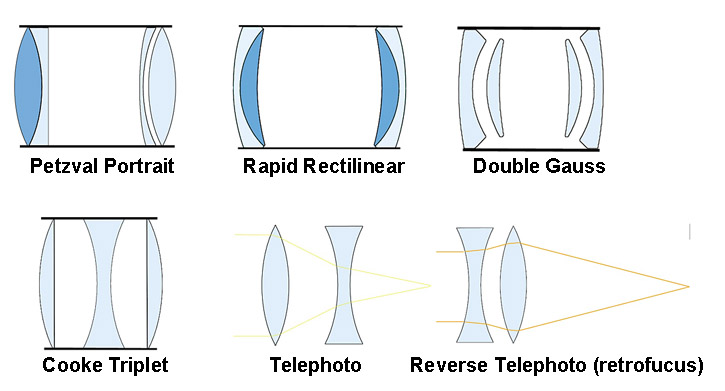 Today we’ll look at lenses derived from the first three of these six “original” lens types (trying to keep this post at less-than-novel-length). If you shoot an SLR and have a prime lens of 50mm to 100mm in your camera bag, chances are pretty high you’ll find it’s a direct descendant of one of the three lenses we’ll cover today. If you shoot with a rangefinder, medium format, or high-end video camera, chances are every prime lens you shoot with (even the wider focal lengths) is descended from one of these lenses.

Disadvantages: Marked astigmatism and field curvature limit it to a fairly narrow angle of view.

History: Designed before 1850, it was an amazingly important lens and the mainstay of portrait photographers for half a century. Relatively few modern photographic lenses can trace their lineage back to this lens. However, Petzval-type lenses were used in the majority of slide and movie projectors until the 1950s. They were also was the basis for the Kodak f1.9 Cine lens, used on thousands of Kodak 16mm movie cameras, and some moderate telephoto lenses based on the Petzval design made until the 1950s.

Disadvantages: Have a tendency to have spherical aberration, field curvature, and astigmatism which usually limits them to moderate aperture (f/2.8 or narrower). Even at moderate aperture, modern lenses based on this design require additional elements to correct these aberrations, sometimes making symmetrical lenses complex and expensive.

History: The Rapid Rectilinear lens, developed in the 1860s, was the fist symmetrical lens (lenses with nearly identical elements on either side of a central stop) of good optical quality. It provided photographers a reasonably wide-aperture, wide-angle lens that was nearly free of distortion. They were the landscape and architectural lens from the 1860s to the turn of the century (as in 1900, not as in 2000). With the advent of high and low index glass, the Rapid Rectilinear design could be modified to reduce astigmatism and field curvature, making them even better. 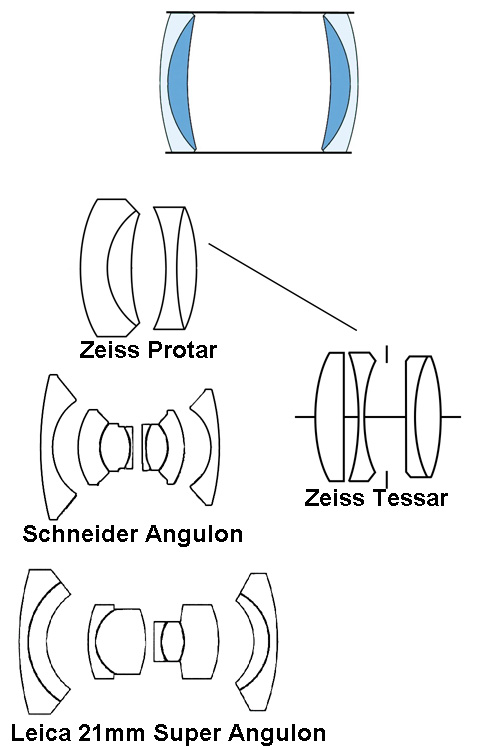 Lenses developed from the Rapid Rectilinear

The Zeiss Protar (originally called the Anastigmat, meaning no astigmatism), a symmetrical lens designed in 1890, is considered the first modern camera lens. Over the years, better lensmaking techniques allowed the number of elements to be increased and the front and rear element sizes to be modified, but the general symmetry around the center stop was maintained. Today’s Schneider Angulon and Leica Super Angulon lenses are direct descendants of the Protar.

Zeiss found that if they separated the front elements a bit, rather than cementing them, they could further reduce other aberrations. This lens, the Tessar, looks a bit like the Cooke Triplet discussed in the next article. The Triplet may have influenced the designer, Dr. Paul Rudolph, but the Tessar clearly derived from the Protar.

Literally dozens of  today’s excellent lenses are simply modifications of the Tessar: Leitz Elmars, Zeiss Sonnars, Kodak Ektars, Schneider Xenars, Voigltander Heliostigmats and Skopars, even the Nikon 50mm f/1.8 are all Tessar variations. If you own lens in the 35 to 110mm range providing very good quality at a reasonable price, usually with maximum apertures of f/2.8, chances are it’s a fairly direct descendants of the Tessar.

The Double Gauss lenses rely on symmetry to flatten field curvature and reduce aberrations, but combine positive and negative elements, all bent in a meniscus towards the center and containing spaces between the elements rather than cementing them together.

Disadvantages: They do have a tendency towards oblique spherical aberration and astigmatism. In their original versions they didn’t have very good resolution.

Derivatives of the Double Gauss Lens

History: The lure of wide aperture has always been impossible to ignore and the same Dr. Rudolph who designed the Protar and Tessar modified the double gauss design by using a pair of thick cemented elements for the inner element of the lens. The resulting lens, the Zeiss Planar, remains in common use today.

In the 1920s, the designers at Taylor Hobson found the design didn’t have to be perfectly symmetrical, they could alter the size and type of glass in the different elements, which increased the aperture even further. This lens (which Taylor Hobson called the Opic) led directly to development of the  Schneider Xenon and Zeiss Biotar photographic lenses. In the cinema world the Cooke Speed Panchro and Angenieux S-type lenses are Planar derivatives.

The design can be further modified with an extra element or two, but the Double Gauss basis is still there. A classic design has 6 elements which is usually sufficient for an aperture f2.0. Lenses with wider apertures  usually require 7 elements or even 8 elements (the extra elements added to control aberrations and astigmatism).

If you shoot with a good-or-great quality wide-aperture prime lens chances are high that it’s a Double Gauss design. They are the dominant design for the 50mm focal length, although they can be made a bit longer or wider. Most spectacularly wide-aperture lenses, including the Leica 50mm 0.95, Canon 50mm f1.0 and the legendary Zeiss 75mm f/0.85 are designs of this type. Many Leica Summarits, Summicrons and Noktilux lenses; almost every 50mm prime made by any manufacturer; and a host of other modern lenses are basically modified Planars. 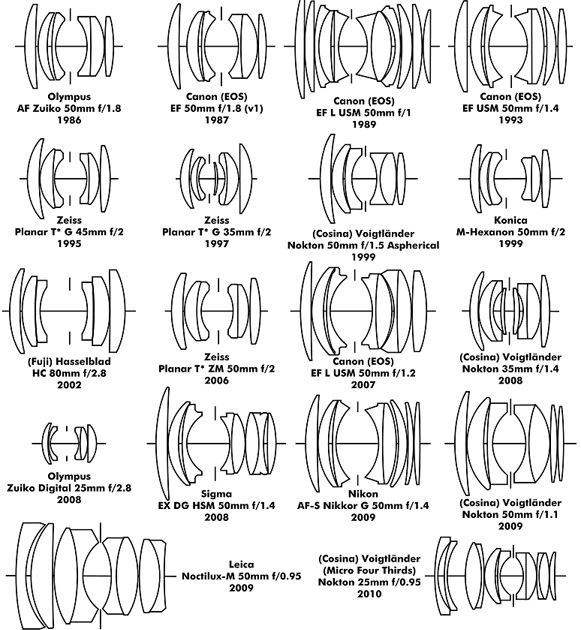 If you have a wide-aperture prime lens of 50mm to 85mm for your SLR camera (or any prime lens for your rangefinder or medium format camera) take a look at its lens diagram. Chances are high you’ll see the core of a symmetrical or double gauss lens, with a few additional elements (or perhaps one of the core elements split in two).

Look at the diagram below for a few obvious examples from modern lenses. The two lenses on the left are the Canon 50mm f/1.4 (top) and f/1.2 (bottom). In the center are 50mm f/1.4 lenses from Sigma (top) and Nikon (bottom). In each of them you can clearly see the central elements are very similar to the Taylor Hobson Opic lens diagram above (and to each other). The different designers have modified the curves of the elements, the glass type used, and most apparently the rear elements to correct the natural aberrations of the lens in different ways. (The lens on the top right is a 24mm and bottom right 135mm, neither of which are based on a Double-Gauss design). 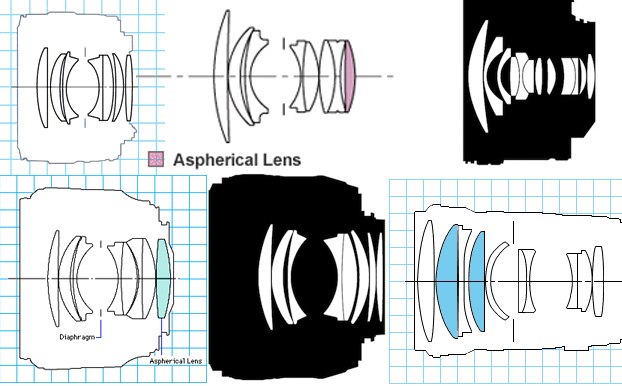 It’s also not surprising that each of the 50mm lenses have some characteristics in common (wickedly sharp in the center, a bit of field curvature, a bit of edge astigmatism, etc.).

Both the 24mm and 135mm lenses in the image above get their heritage from a different type of lens, which is very obvious when you compare their diagrams to the 4 similar lenses on the left. These other designs have their own core characteristics, but that discussion will have to wait for the next article. This one has gone on long enough.

Kingslake, R: A History of the Photographic Lens. Academic Press. 1989.