I’m pretty certain I haven’t gone soft over the last 4 years. I am certain, though, that Sigma Photo, Inc. has changed a lot in that time. Truth is, they’re making serious waves in the photo industry these last few years. They’ve improved their repair service and quality assurance. They’ve released some world-class lenses at way less than world-class prices lately. And now they’ve released their USB dock and Optimization Pro software.

I’ve spent the weekend playing with it. Partly because I really think this is a revolutionary product and I wanted to see how it worked. Partly because I desperately need a ‘Honey, I’ve really got to do this for work’ excuse or I’d have been restaining the deck.

My conclusion, as usual, first: if anything is going to get the attention of those who like to disable features in firmware, overprice lenses, and limit our ability to customize, this might be it. I did some adjustments this weekend, in about 10 minutes, which would have required a trip to factory service on a Canon or Nikon lens. And let me stop the Fanboy stuff before it starts: you may never have needed to make this adjustment on your 10 or 20 Canon or Nikon lenses, but I’ve sent dozens of them to factory service adjustments for exactly the issue I’m going to demonstrate today.

Quick Overview of the USB Dock and Optimization Pro software

The directions are pretty simple:

Once you hook things up the program the program opens to a nice, straightforward main page. 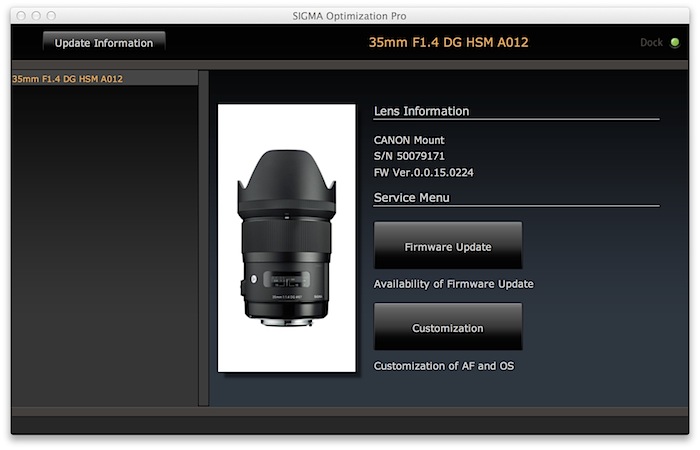 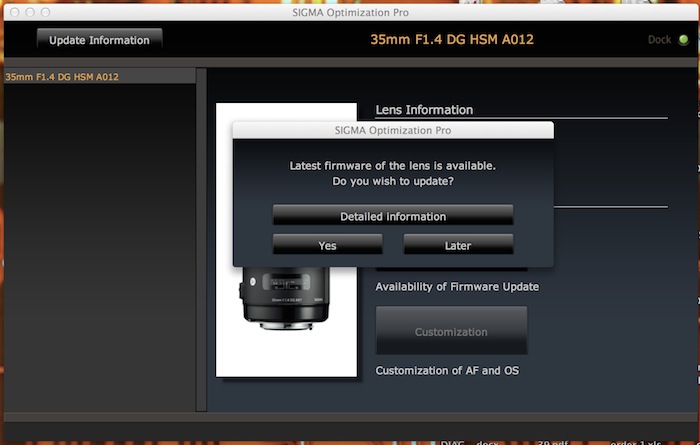 First of all, there’s a nice 10-minute video that Sigma made that shows you the use of the device very clearly HERE. If you’re like me, though, you might prefer a 30 second blog read. It really is that simple. Actually, 10 minutes is more time than it took me to do my first adjustment on the 35mm f/1.4 (of course, without reading any manuals).

I should be clear, I don’t do a full-ballistic, OCD, 600-shot microfocus adjustment. I’m too aware that phase detection AF is a shotgun, not a sniper’s rifle. I’ll take nearly perfect in 10 minutes rather than perfect in 4 hours every time. Plus, like I said, I’ve got a deck to stain. Unless I can put it off so long that my wife gets frustrated and does it herself.

I chose a lens that is perfect for this software. This copy of the 35mm f/1.4 is perfect on my Canon 6D at close and intermediate distances, but at long distances it backfocuses badly. I can do a microfocus adjustment to correct long-distance focus, but then the lens is frontfocusing at near distances. Without the Sigma dock and software, the only option was a trip to the factory service center to change the lens parameters.

Since I was at home instead of the office, I didn’t have Focal, LensAlign charts, or any of the other things that seem to be considered necessary tools for autofocus adjustment these days. So I made do with a placemat and my back yard.

Since I plan on using this lens outdoors in daylight I wanted to adjust it in daylight (autofocus can change slightly in different lighting conditions, if you aren’t aware). I started with a placemat set in front of a picture window. 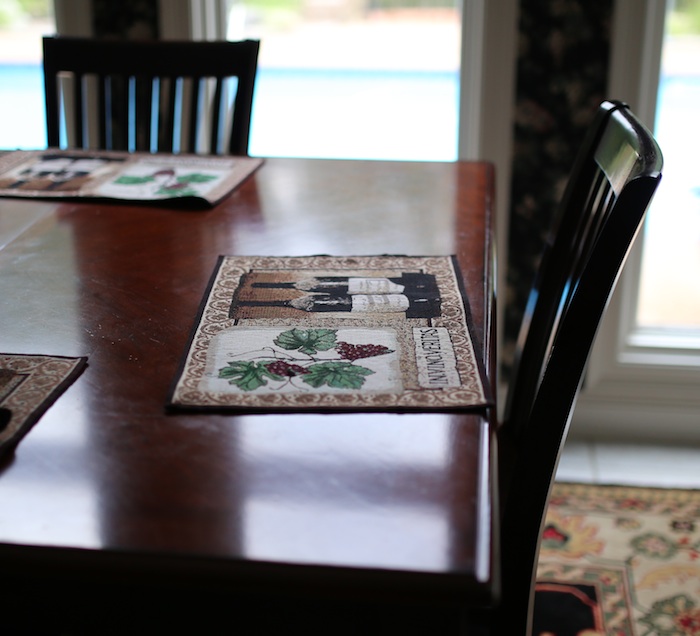 Spot focusing on the tip of the green leaf, I took several shots each at minimum focusing distance, 3 feet, and 6 feet. They all showed focus was accurate, as in the samples below. 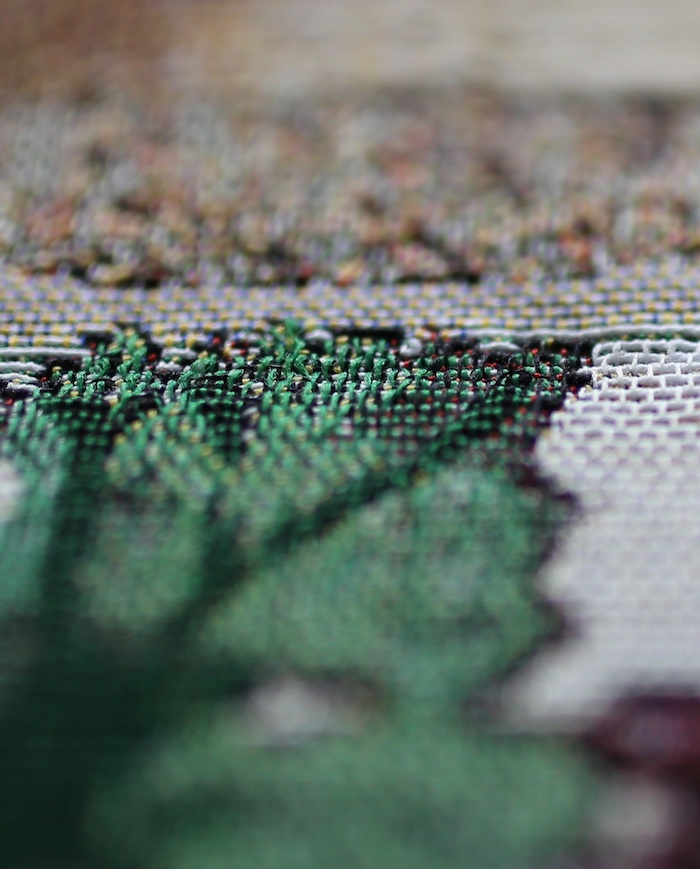 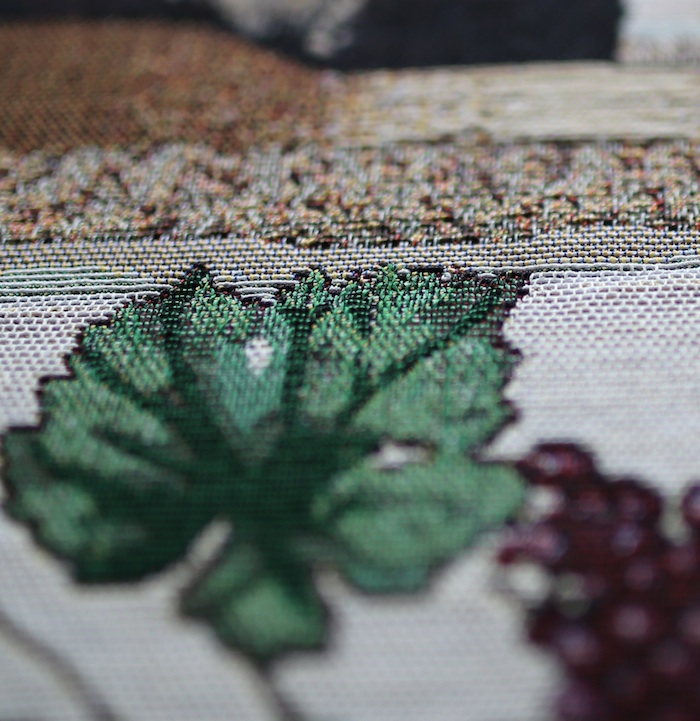 Focusing at longer distances, however, showed the lens backfocused quite dramatically. In this image the focus point was on the small yellow leaf in the foreground (I’ve cropped the image to show the area behind the focus point). 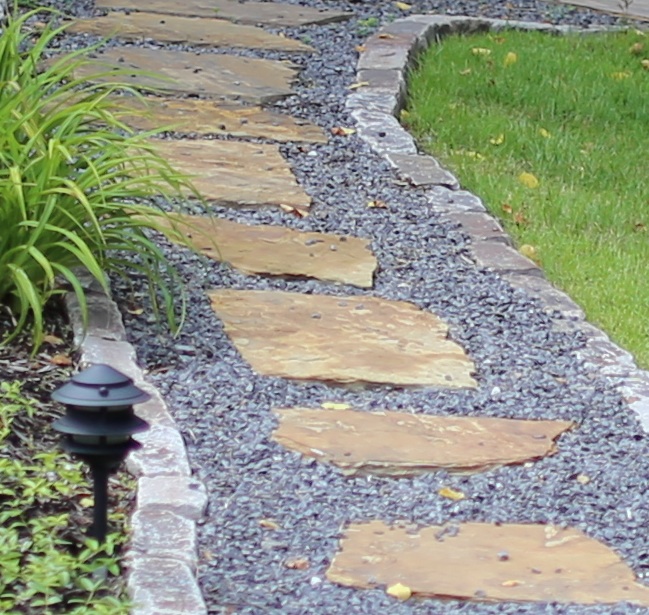 Opening up the Sigma adjustment window shows I can make adjustments at 4 distances. With the 35mm, 3 of those are close: roughly 0.3, 0.4 and 0.7 meters. The other is infinity. 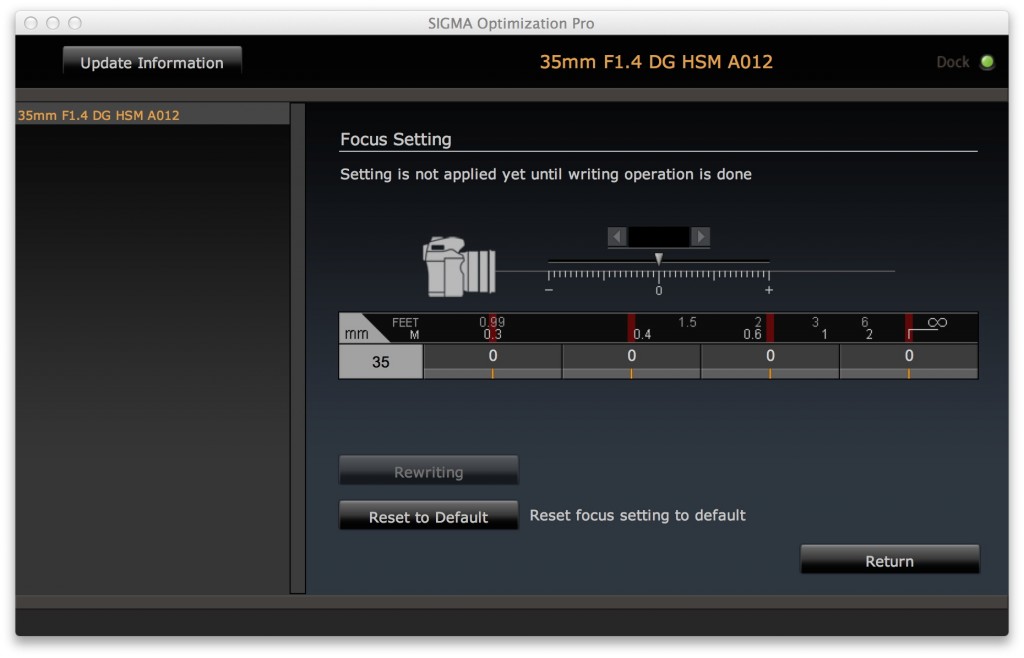 I left the close adjustments at zero and gave infinity adjustment a -12. You just click on the area you want to adjust, move the slider the amount you want adjusted, and then click the “Rewriting” button. (The “Rewriting” button is the only part of the software that isn’t totally intuitive; it isn’t highlighted until after you click on it.)

A repeat shot outside showed -12 was way too much adjustment so I went back and reset the infinity adjustment to -8. That was spot on as shown in the image below. I rechecked AF at closer distances and it had not changed a bit. 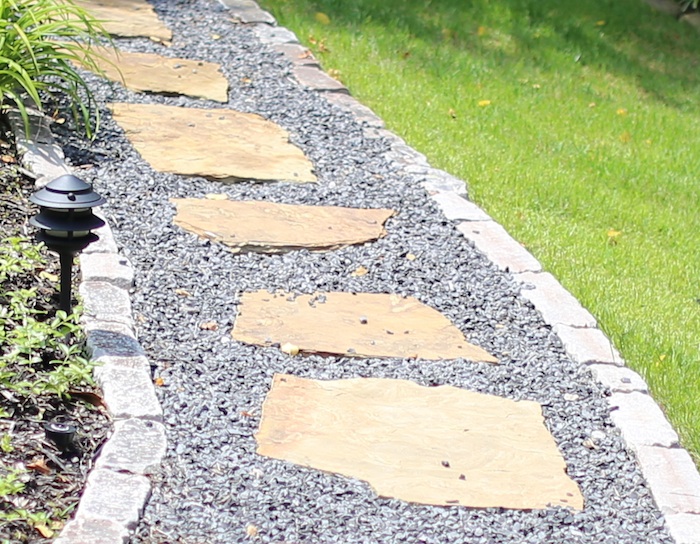 Total elapsed time for firmware update, focus checks, focus adjustments, and final check was just about 10 minutes. Obviously a zoom lens, which can be adjusted both at different focal lengths for different focusing distances at each focal length, will take longer.

For the even slightly gear-head amongst us, this is an awesome tool, giving us the ability to fine-tune autofocus adjustment much more completely than simple camera microfocus adjustment. At $59, I consider it an amazing bargain for anyone who owns one of the Sigma Art, Contemporary, or Sports lenses (it does not work on older lenses).

I’ve already heard a couple of people complain that it should be included with the lenses but I disagree. First, the price is very reasonable and the software is free. Why would they include it with each lens (which probably means each lens costs $59 more) when you only need one for all of your lenses? Not to mention half the people who got it would never use it.

I’ve heard others state that only Sigma lenses need such a device. I’ll meet them part way: I think there is probably a more frequent need for such adjustment on third-party lenses, but I can absolutely guarantee you that the big-boy’s lenses do indeed have this same kind of problem, at least occasionally.

Whether they need it more frequently or not, now Sigma DOES have such a device. Which means, for example (just pulling a random lens out of my hat), the Sigma 35mm f/1.4 is now not only sharper and less expensive, but also more accurately adjustable than the manufacturer’s 35mm f/1.4. I wonder if anyone is hearing footsteps*?

* For my non U. S. readers, hearing footsteps is a term used to describe an American football player, who, thinking he is wide open and about to catch a pass, unexpectedly hears the footsteps of an unseen opposing player about to crush him.