I have a couple of things to talk about today. First, is to announce the winner of our name the new machine contest. Second is to answer about 1,000 people’s questions regarding optical testing and adjustment.

First, if you don’t known what we are naming then you can find out about it here. Second, as so often happens, I was unprepared for the number of responses. We received nearly 700 suggestions here, not to mention dozens more via Petapixel, DPReview, and the Imaging Resource. 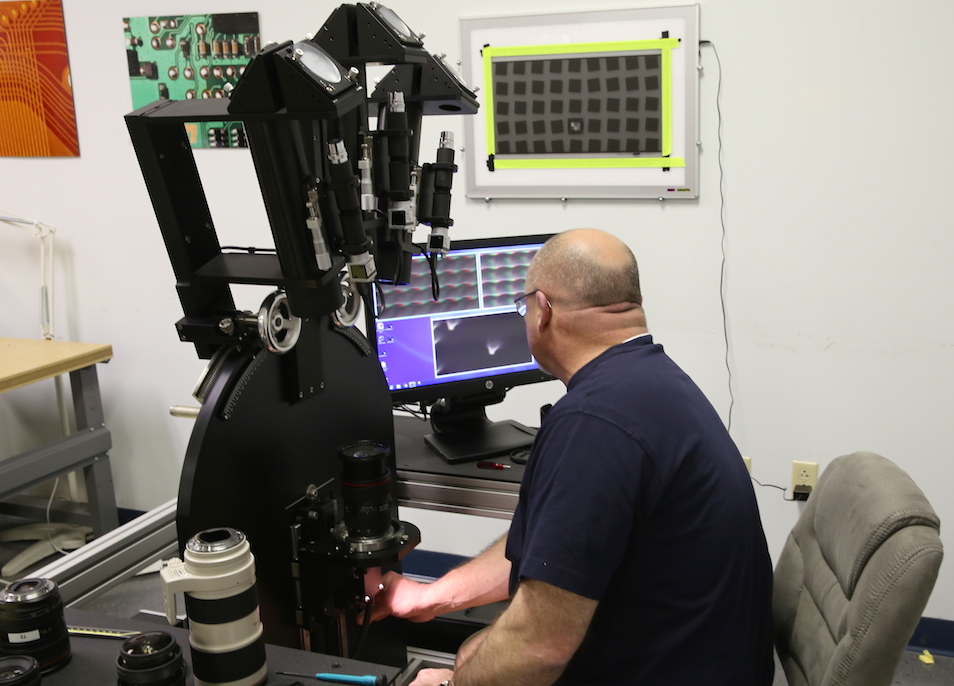 We quickly realized that, once again, we’d started a contest without establishing any criteria for winning.

1. It must be jargon that others will find confusing.
2. It must be easy to say 50 times a day.
3. It must sound harmless to the people who hold the purse strings.

Those sounded pretty good to us. We’ve found that harmless sounding jargon that confuses, without intimidating, those holding the purse strings is a marvelous tool.

Personally, I loved the many acronyms using R.O.G.E.R.  and C.I.C.A.L.A. I pointed out that those are obviously easy to say 50 times a day since people here already say them constantly. Aaron and Darryl hated that idea, though, and pointed out that chaos that would result from saying things like, “go put that lens on R.O.G.E.R. and see how it looks.”

The second criterion eliminated my favorite acronym: Apparatus for Laser Impulse Collimated Emission, Sent in a Refractive Elements System for True Assurance of Uniform Rigorous Alignment in No Time (Alice’s Restaurant). Much as I’d love saying, ‘You can adjust any lens you want on Alice’s Restaurant.’ it would get old saying it 50 times a day.

However, creating such a complex acronym while referencing a previous blog post has to get a prize. So Frank Mee wins some lens elements, or gets a lens tested, or something similar that doesn’t cost me any money and shows how appreciative I am. Shoot me an email, Frank.

In keeping with the Alice’s Restaurant theme, we all loved the two suggestions of  The Group ‘W’ Workbench, because it’s such an accurate description of the repair department. But it loses something shortened to ‘W’, and inevitably it would be shortened. 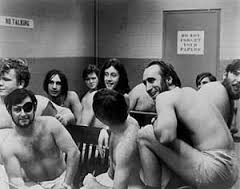 The Group W Bench. Screen clip from the movie “Alice’s Restaurant”. I have no clue whom to credit. Although credit might not be the correct word.

I loved the historical anagrams like SCHOTT, ANSEL, and NIEPCE, but my younger, historically challenged co-workers overruled them. Aaron liked many of the mythological names like ‘Cerberus’, while Darryl liked the science fiction based names like ‘Sauron’. The ‘easy to say 50 times a day’ and ‘not sounding intimidating’ criteria took out most of those, though. (We were a bit sad to give up ‘Cerberus’. Several people suggested it, but Marc’s description that ‘There are few things more bad-ass than a three-headed hellhound’ made it especially attractive.)

At any rate, we finally narrowed the 700 entries to a few that we liked and that also fit the Alicoate criteria:

While we liked all of these suggestions, I ruled out Latte, simply because diluting a caffeinated beverage in any way is just wrong. We also love Bambi, but it took the not-intimidating thing a bit too far. Similarly Test Thingy got shoved aside, because we already refer to 13 tools as ‘thingy’ because we’ve forgotten their names.

Sci-Fi Darryl was predictably all for Zardoz, but Darryl doesn’t get to use it so I took away his vote. Aaron liked LOLA, but trying to sound like Ray Davies saying “ell-O ell-A, Lola” with my Southern accent was an epic fail, so that was eliminated, too.

So, by the power vested in me as purchaser of the machine, I decided on OLAF. I admit that part of the reason was I had a really lame working title for this blog post. Choosing OLAF let me rip off my favorite poet, e e cummings, and use “I sing of Olaf, glad and big” for a better title. (Yes, I realize that admitting I have a favorite poet could result in my PhotoGeek Membership card being revoked. But having just bought this machine I feel my Geekiness cannot be challenged right now.)

So Jake, send me an email to arrange collecting your priceless (and I mean that in every sense of the word) prize.

A lot of people have already asked if we would optically calibrate their lens. Unfortunately it’s just not possible right now. Our small repair department is hard pressed to just keep up with Lensrentals’ repairs and quality control. But there have been so many requests and questions that I thought it worth discussing here, rather than answering 200 emails individually.

We’ll take delivery next month of a Trioptics Imagemaster MTF bench, which is the current gold standard for optical testing. We’ll spend most of the summer establishing standards with our new equipment and test enough lenses so that I’m comfortable that we can be absolutely accurate.

If everything goes as well as I hope, by the end of summer we’ll be offering an optical testing service at a reasonable price. Most of you don’t realize what a big deal that is. Today if you want to have a lens optically tested the cost is several hundred dollars. I think it can be done accurately and profitably for a small fraction of that amount. If I’m correct we’ll offer that service.

What’s a reasonable price? I can’t say with absolute certainty yet, but for a prime lens probably about $35-$45. A zoom will probably be about twice that price  since they have to be checked at several focal lengths.

Who would want it? Some people who just have questions about their equipment, or are arguing with factory service about whether their lens is ‘in spec’ or not. Others might want to document the optical condition of an expensive lens that they are going to sell. Even some manufacturers who are interested in an outside source of quality control have expressed some interest.

It could be that nobody will want it. I’m fine with that, too. Truth be told, I do this because I can and it fascinates me. I’m probably the luckiest guy on the planet; I have the resources to explore the hobby I love as deeply as I want to.

Some have to be completely disassembled, partially reassembled, adjusted at over dozen locations, then reassembled for final testing. This kind of lens requires 3 to 4 hours of labor even with all of our new toys. We always give the factory service center first chance on these lenses. They don’t always get the optics corrected, but when they do the cost is generally less than what we would charge for the amount of time involved.

There are a number of reasons for this:

1. Some lenses are optically bad because there are broken parts inside. We don’t always have the parts needed (some brands don’t sell parts) but the service center does.

2. The service center technicians are better and faster than we are at disassembling and reassembling lenses. That’s just logical. One of their lens technicians may have to master 20 or 30 lenses. We have to work on those, plus all the other brands, plus cameras, tripods, lighting, etc.

3. Factory service centers have in-depth repair manuals that tell exactly how to do things (and keep those manuals as secret as CIA documents). We try to reverse engineer things as best we can.

So why do we still need to adjust lenses? Simply because some service centers don’t do a very good job with certain lenses. Every service center is 99% accurate when it comes to things like replacing a mount or aperture unit. A few are 95% accurate at optically adjusting certain lenses. There are other lenses where almost 50% return to us optically horrid — and the service center either can’t correct it, or isn’t willing to spend the amount of time it takes to correct it. These lenses we have to fix in house; we have no choice. It’s expensive, but otherwise we’d own an expensive paperweight.

So if we’re not going to adjust lenses, does this machine matter to you? I hope that it will for a couple of reasons.

First, for those who ask if the factory service center has this, or a similar piece of equipment, the answer is sometimes. Zeiss, Nikon, and Leica certainly do. But the equipment they have is large and incredibly expensive (what I’ve been told ranges from $300,000 to $500,000), so they don’t have it everywhere. I can’t say for certain (and the company isn’t saying at all), but I’ve been told that Nikon has it at one of their factory service centers in the U. S. but not the other (again, that’s second-hand information that I can’t guarantee is accurate). Zeiss and Leica have them in Germany. I don’t have any information on other companies.

I don’t know of any authorized repair shop that has anything more accurate than a center-testing collimator or lens-test projector, which I can assure you aren’t sufficient to accurately adjust optics. Most have nothing more than a test chart, and those are often small test charts at that.

While $80,000 and 300 pounds sounds big and expensive, OLAF is a lot smaller and cheaper than the kind of equipment discussed in the first paragraph. Not to mention this is a prototype device. After working with it I’ve already gotten a couple of ideas that would make it less expensive and more capable. That’s what prototypes are for. The person who first suggested it, Brian Caldwell, is going to come see it in a week or two, I’m sure he’ll have even more ideas for improving it.

What I hope happens is that OLAF’s offspring are relatively inexpensive tools that will allow existing service centers to do excellent optical adjustments cost effectively. The hundreds of emails I’ve gotten, and the hundreds of complaints some of the service centers have gotten, certainly show there’s a market for these capabilities. Heck, I’d love to not ever do optical adjustments here at Lensrentals and would happily send them off to someone else who could do them. That’s a fairly big market by itself.

A couple of independent service centers and one manufacturer have expressed interest in coming to look at OLAF and we’re happy to share anything we know with them. Hopefully that will lead to something. Optical adjustment of lenses for the public (as opposed to in-house repairs) simply requires more resources and expertise than we have.