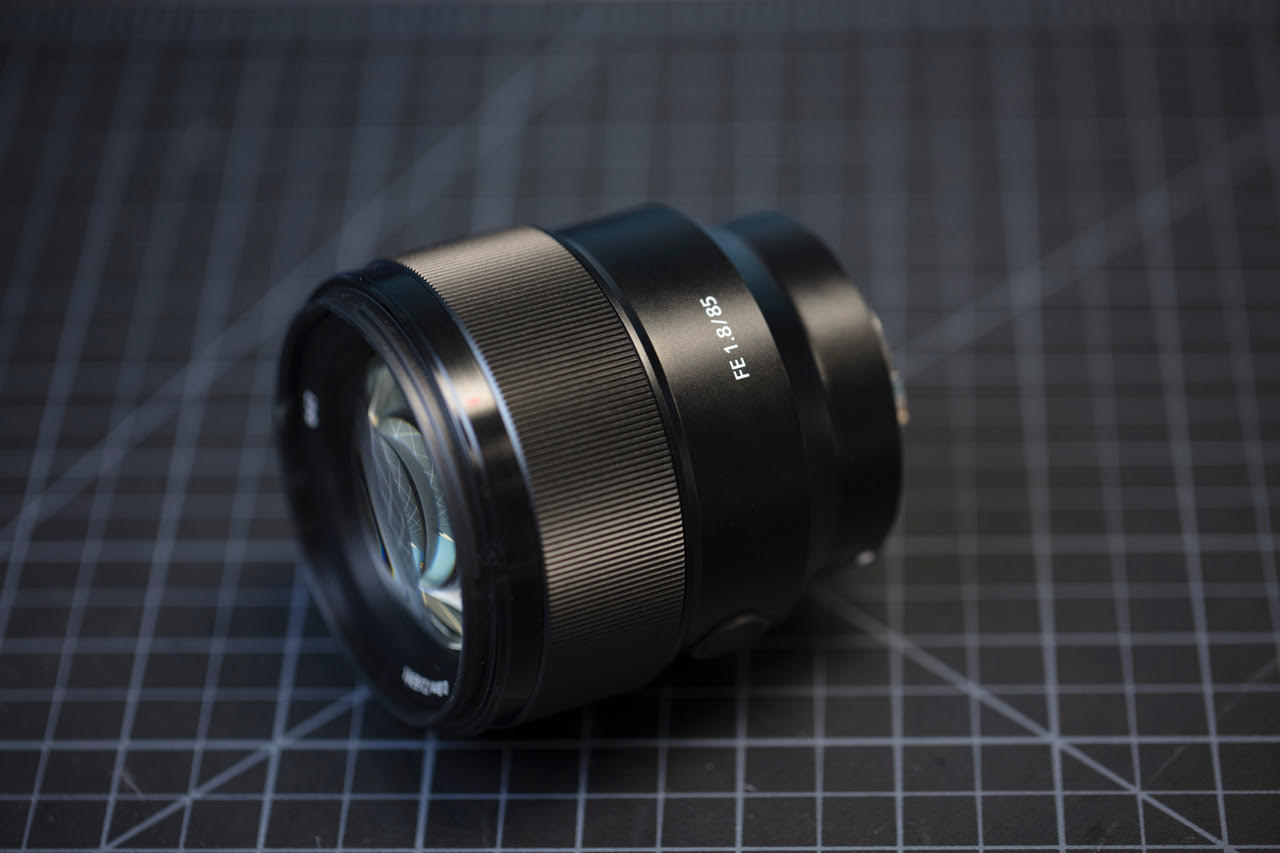 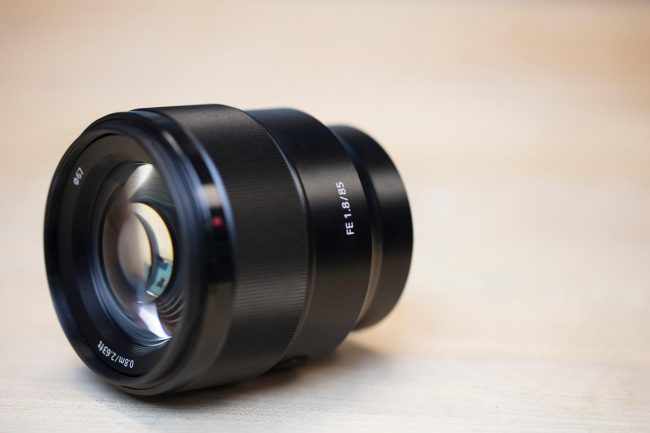 As always, this is not a review, just the results of MTF tests on ten copies of the lens in question, along with my usual disclaimers and perhaps a comment or two.

For those of you collecting the full set of MTF charts, here are the results from the Sony FE 85mm f/1.8. 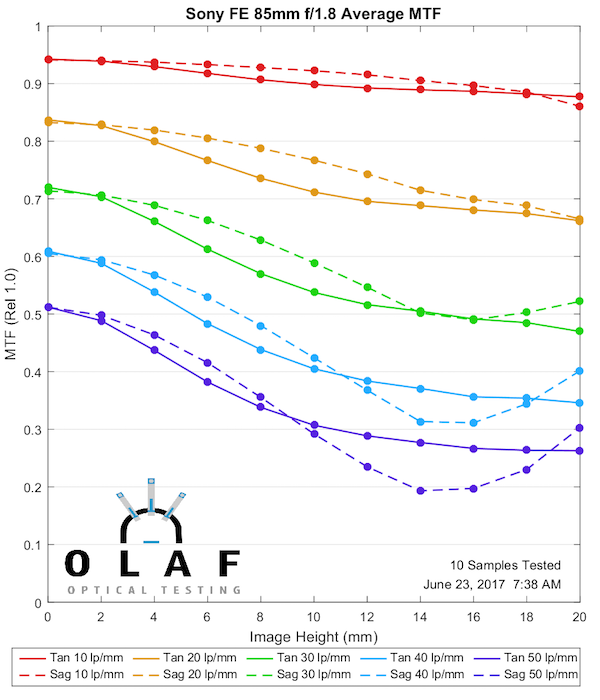 This is a nice MTF set, no massive astigmatism-like separation in the sagittal and tangential, staying elevated out to the edge of the image. I’ll give you some comparisons in a minute.

This was always a question with early Sony primes, but the range here is good, one of the more consistent Sony lenses. As always, our variance process measures the copy to copy of ten different lenses, to ensure that we didn’t just get a really good copy or lemon throughout our testing. 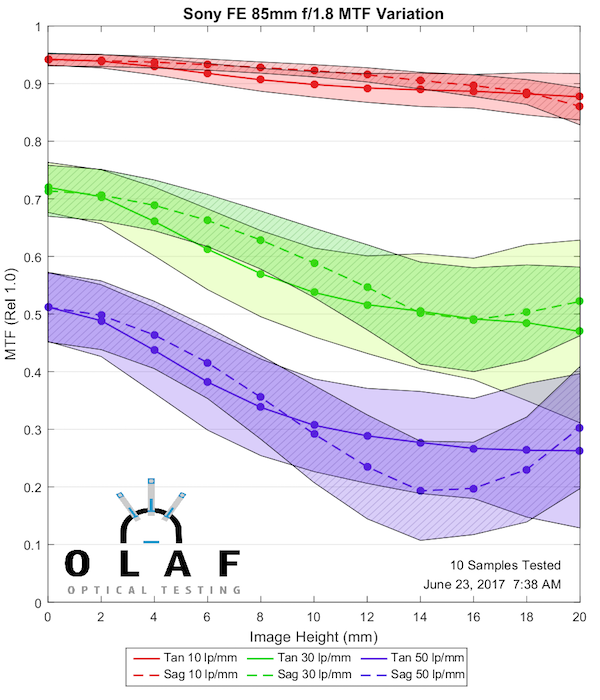 I mostly limit my comparisons to things that might be an actual buying choice or reasonable comparison. Not that it stops someone from cutting graphs and showing something ever-so-meaningful – like the Nikon 200mm f/2.0 is sharper than the Canon 11-24mm f/4.

Let’s start with the Sony vs. Sony comparison

While opposite ends of the price range a lot of people would love to save some money on an 85mm prime and put it toward another lens if performance is similar. Remember, we have an aperture difference here; the 85mm f/1.4 would have higher resolution at f/1.8. 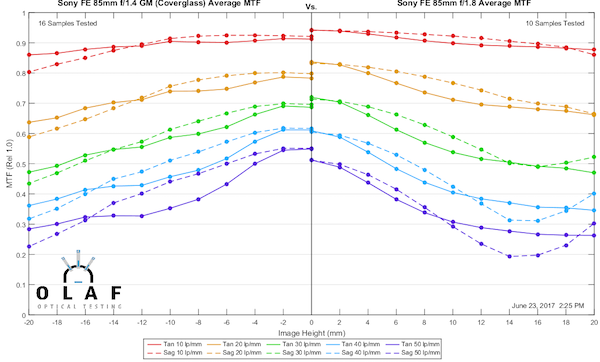 To make it clear, the 85mm f/1.4 is a bit better; don’t mistake the higher red line in the graph (10 line pairs/mm) of the f/1.8 as being better. Realize that the f/1.4 would raise to at least that level at a f/1.8 aperture and the higher resolutions (blue and purple lines) are already better away from the center. Still, the difference isn’t huge, and the f/1.8 would certainly be plenty good for most people, and probably at f/2.8, the two would be close to identical for those that are shooting there.

This one is a more fair comparison since both lenses are tested at f/1.8. From an MTF standpoint, the Batis is clearly better both in the center and off-axis. But at twice the price it is supposed to be. 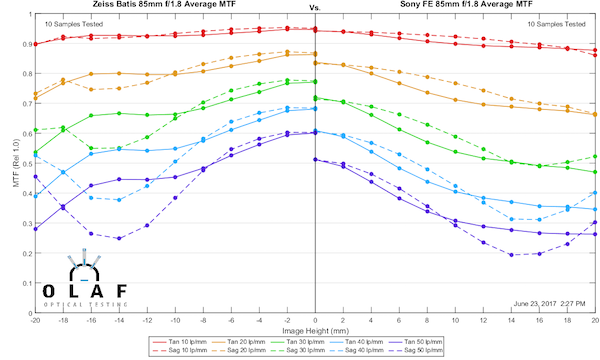 I put this up, not because a ton of people will be deciding between these two (although some are), but simply because the Sigma is the benchmark for how good a reasonably-priced 85mm prime can be. 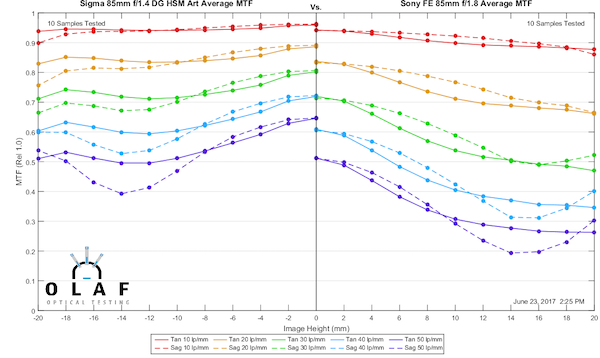 So was this exciting or what? I’m sure the answer to that question is dependent on who you are and if you appreciate nerding out to MTF charts. We have a reasonable performance 85mm f/1.8 lens at a fairly reasonable price in FE mount now. It isn’t cool, or sexy, or going to change the way you do photography and see the world around you. But it’s a useful option to have, and I bet it finds its way into a lot of camera bags.