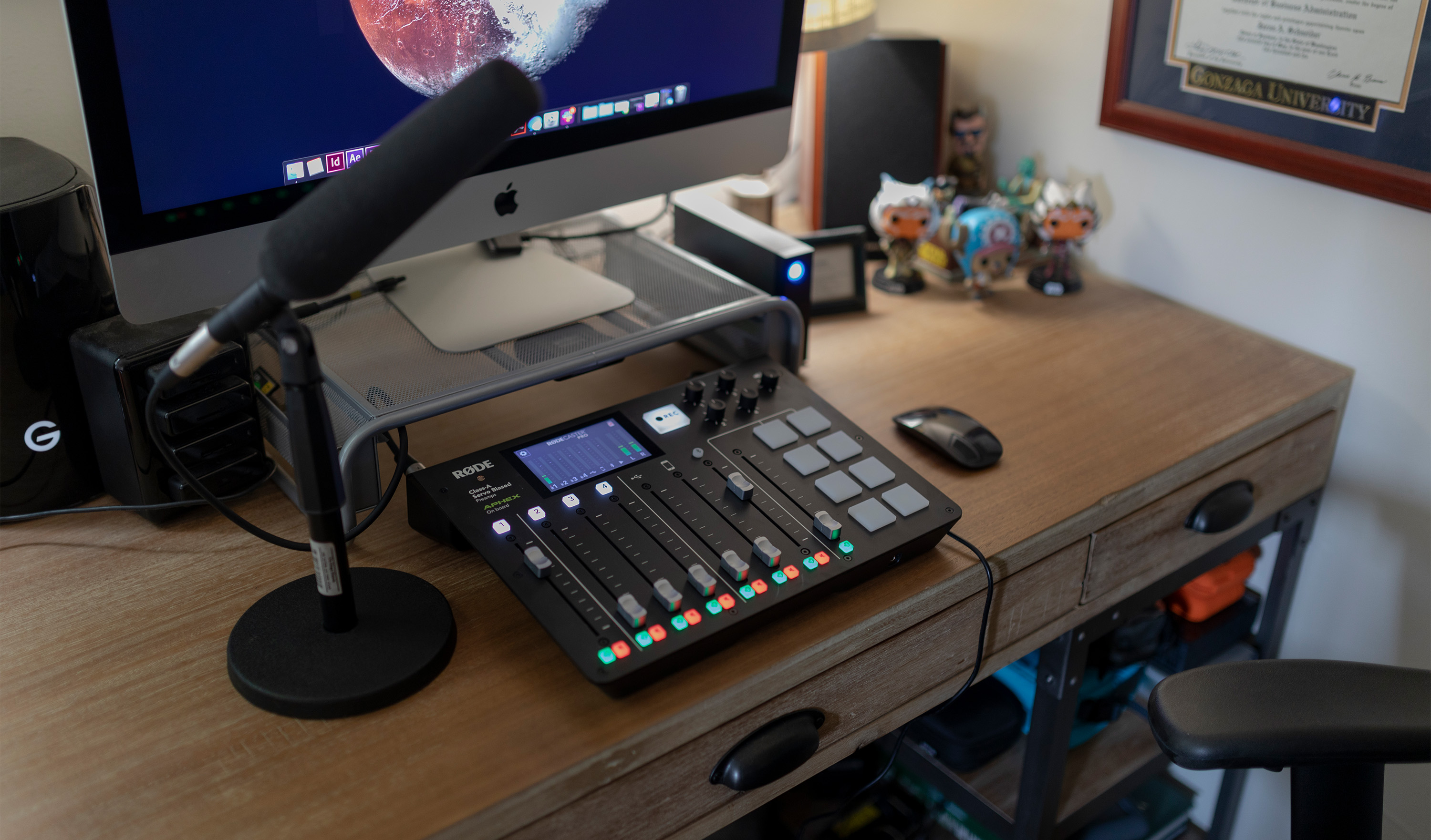 Podcasts are hot right now. If you haven’t thought about starting your own or choosing to take part in someone else’s, you probably listen to one (or several, in my case). Personally, I co-host a podcast with YouTuber Ted Forbes from The Art of Photography, and you can catch new episodes of that show every week at The Art of Photography: Off Camera.

But even for seasoned audio/video professionals, tackling the intricacies of getting pitch-perfect audio and having the right control over it can be a bit daunting. Speaking from experience, I have been more than prepared for video production as a San Francisco based videographer for the past five years, but starting my own podcast left me scratching my head. I knew I needed microphones and stands, but after that… how was I going to even record my voice? How was I going to sync up with guests or co-hosts? How would I make sure my levels were right? What about my co-host’s levels?

I solved my problems the hard way: the cruel mistress that is experience, and repeatedly failing before getting it right. But luckily there are now devices like the Rodecaster Pro that streamline the process for anyone looking to jump into the market today. If you want the ability to sit down in a room, plug in and get going, the Rodecaster Pro has a lot to offer. It’s not quite perfect yet, but it is darn close, and Rode is already showing their willingness to support the product with firmware updates. With just one more little update, I think the Rodecaster Pro can go from good, to great. 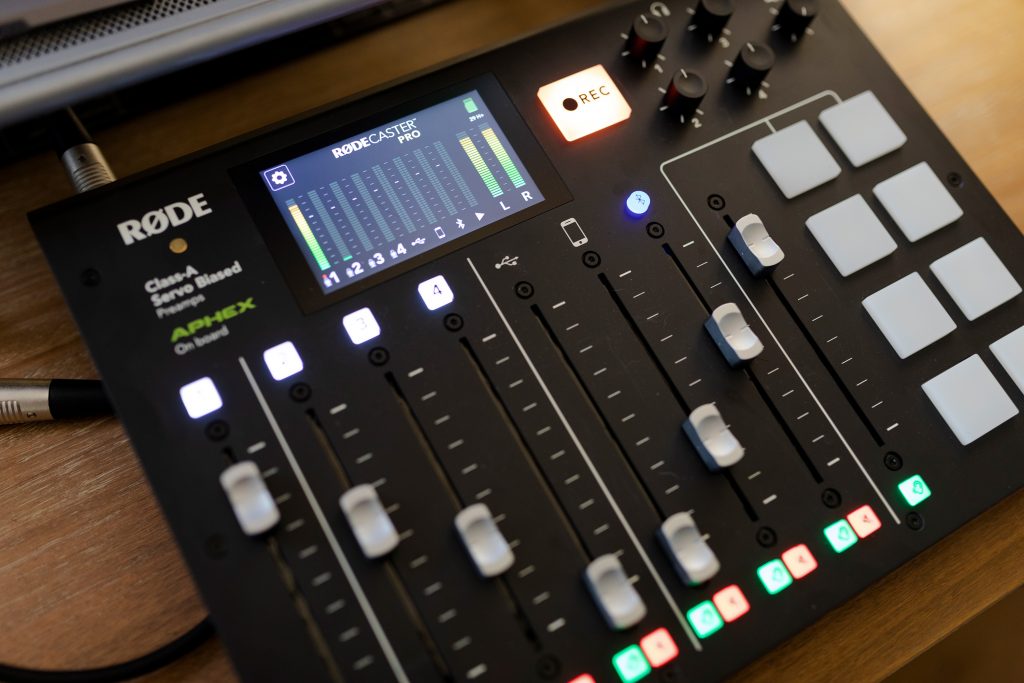 So what is the Rodecaster Pro? Well, it’s an all in one soundboard designed to act as the heart of a podcast operation. With seven possible audio inputs, four of which are XLR, it’s highly unlikely you’re going to require a device capable of handling more lines. Heck, even radio shows rarely go above two or three, except some “morning zoo” style shows going as many as five. But that is an extreme case, and for 99% of podcast needs, the Rodecaster Pro is going to offer more than enough for your operation.

For anyone who hasn’t dealt with audio control boards before, it can at first seem daunting, but it’s straightforward to pick up. In addition to it being fun to move those audio sliders up and down and mash the silicon buttons (because c’mon, anyone who saw Star Wars as a kid knows the innate desire to play with shiny buttons and sliders and pretend to fire the Death Star super laser), what they do when they’re pressed and the feedback that you as a user receives are excellently designed. 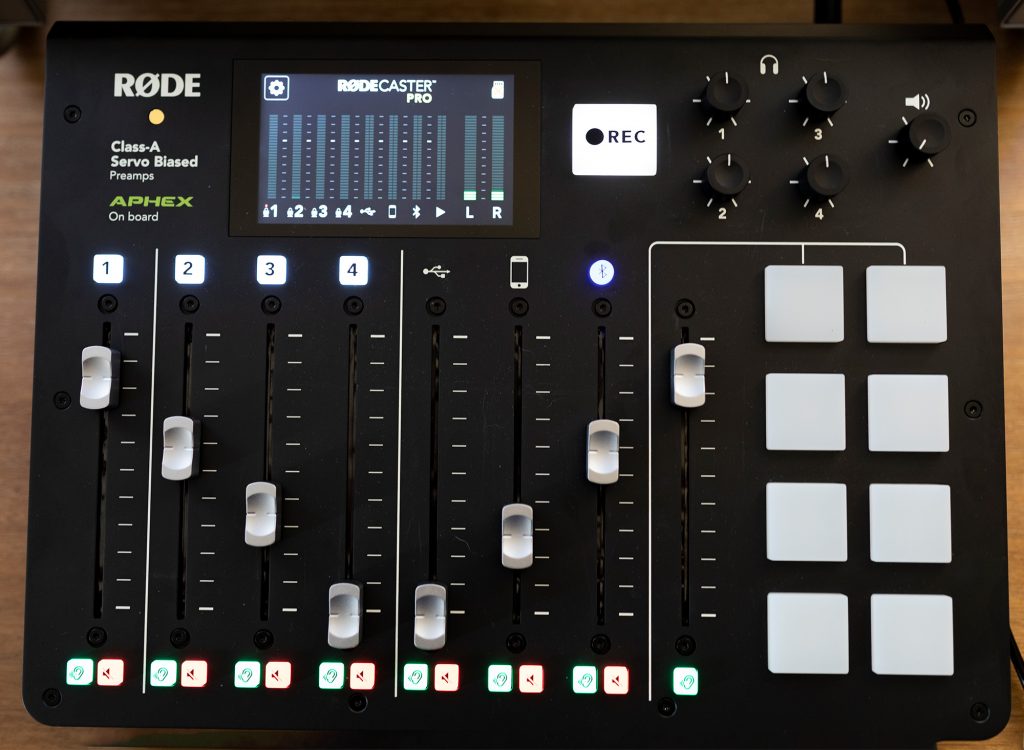 For example, let’s talk about the simplest slider, input one on the far left side of the board. For me, that was my microphone input. While recording, there are moments where I may have to cough, sneeze, mute a phone, yell at a neighbor; you name it. Without a soundboard like the Rodecaster, I would have to deal with those interruptions in post editing, and likely also interrupt whatever my cohost or guest is saying. But with a soundboard, I have a little bit more power. If I can predict when a sound might interrupt, like a sneeze, I can quickly mute my line with just the tap of a button above my slider. If my cohost starts telling a particularly funny story and I can’t help the volume of my laugh, I can pull my volume down quickly and easily with the slider.

These are all options that are unavailable to you without some kind of soundboard. Even digital boards aren’t as good if you can’t move your mouse and quickly click locations on a screen as fast as you can intuitively slide your hand over a silicon button or slider. Trust me; it’s much better to have a board.

The more people you add to the podcast, the more the benefits of having the Rodecaster Pro show themselves.

You as the master of the control board can also determine how loud everyone’s feed is into their headsets, if they’re all connected into the same board, and can monitor everyone’s sound during recording just as I described above. You can also log sound effects and music into the board and map them to one of the six audio pads on the far right of the board. I personally don’t use this feature, but you theoretically could use this as a direct lead-in for your intro music or when you need to play a clip that everyone will then later comment on. When you can map sounds and clips to the board, you can start to think of the practical applications beyond the stereotypical “hilarious” sounds from the aforementioned “morning zoo” style of radio morning show. 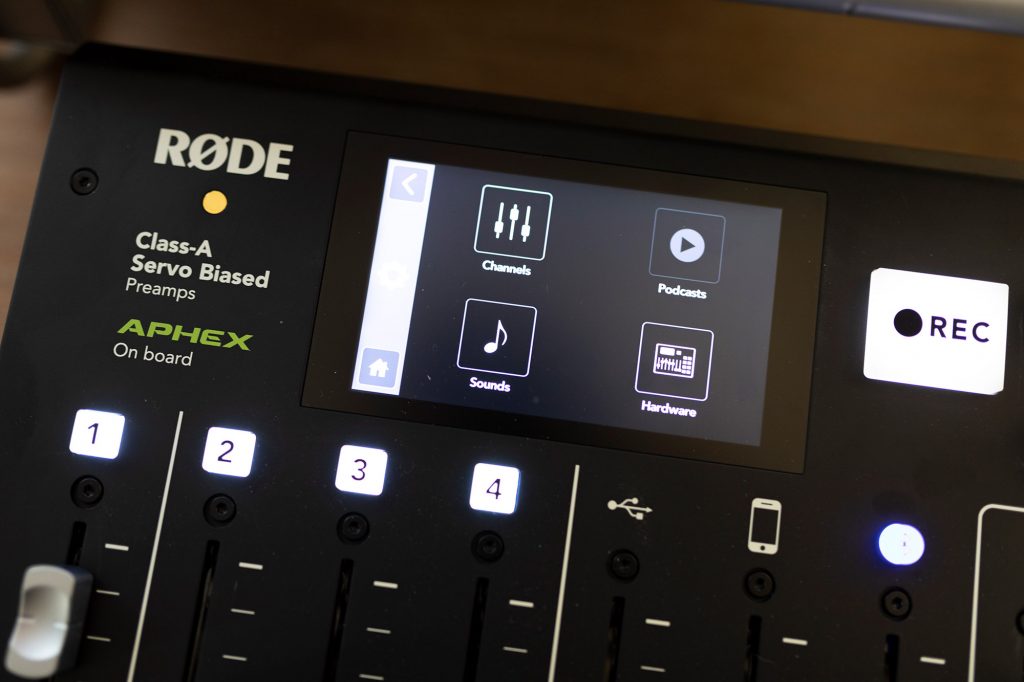 Before you start your first time with the Rodecaster Pro, I recommend going into the settings of the device and fine-tuning it to your specific voice and needs. The main LCD on the top of the Rodecaster Pro is both a monitor for your active podcast, but also a touch screen that holds many options for you as a soon-to-be podcast star. Rode has a lot of tutorials on their website that I recommend checking out before you start your first ‘cast so that you get the most out of the device.

Speaking of getting the most out of your device, there are two ways you can record audio from the Rodecaster Pro. The first way is the most obvious, and that is just throwing in a microSD card into the back of the soundboard, and you’re good to go. When you record this way, all inputs that go through the board are recorded together into one finished track. If you’re in a room with all the members of a podcast and you want to do everything through the board, this is a great setup, and you’re good to go.

But if your podcast has the intricacies of different members in different locations, then you’re going to want to do a bit more. 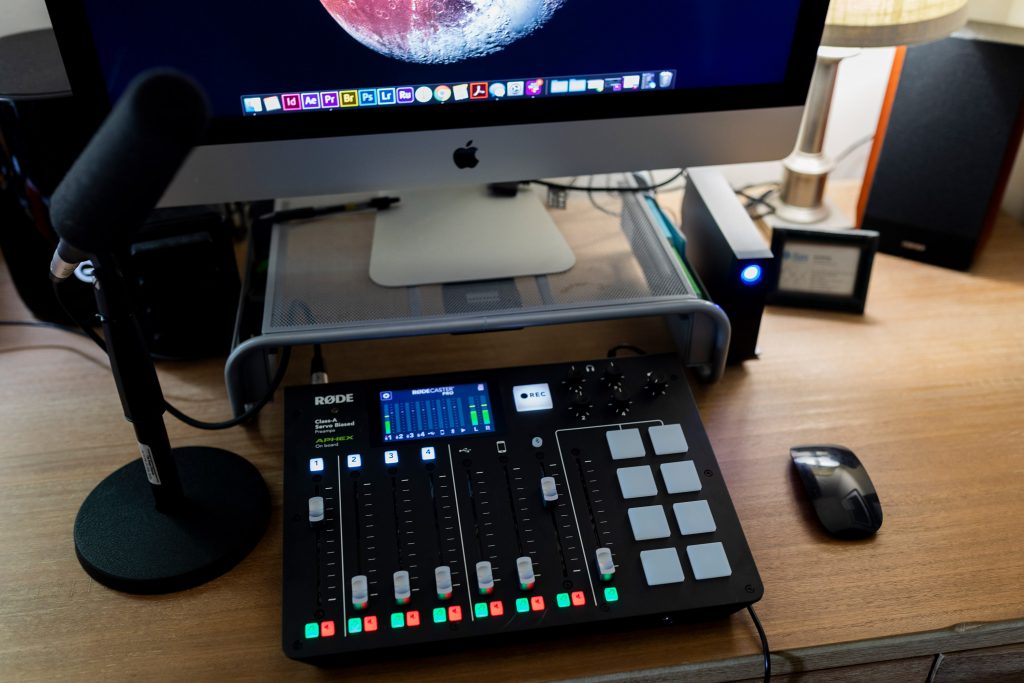 At the time of the writing of this review, Rode had released one major firmware update for the Rodecaster Pro that allowed for multi-track recording through the Rodecaster when you’re connected to a computer via USB. For the full instructions on how this works, please refer to this tutorial video they put together that will walk you through it. The upside to this is that it will allow you to get more than just the completed stereo track of all the inputs in one audio file, but will instead be able to output each track individually for you as the editor to mix later.

This is my preferred setup, but the fact that it requires a computer connection means that this device isn’t quite as complete of an “out of the box” podcasting setup as I had hoped. At the time of this review, Rode had not instituted a way to do a multi-track recording to a microSD card, which means for the most control of your audio you’re going to have to be ready with a computer plugged in before you start podcasting.

When I mentioned in the opening paragraphs that the Rodecaster is good, but is just one update way from being perfect, this is the feature I was referring to. Being able to do multi-track recording direct to microSD would really put this device over the top, and I think Rode has to know that and will likely release that feature as another firmware update in the future.

But aside from that one complaint, the experience of using the Rodecaster Pro was outstanding. It’s very intuitive, has a lot of customization options, and most importantly it gives me as the podcaster more control over what I’m recording and how I am recording it. It’s compact, user-friendly, and incredibly intuitive with excellent support from the folks at Rode. It’s clear they believe in this product based on their continued support for it, which is always a good thing for us as users.

The Rodecaster Pro is currently available for rentals in two variations – the Board itself and bundled into a Podcasting Starter Set.

Addendum –  Shortly after the RodeCaster Pro was reviewed, Rode introduced a firmware update addressing the only minor complaint we had with the system: you now have the option to separately record tracks directly to the microSD card. With this update, there really is no other system quite as compact and complete as the RodeCaster Pro.

Jaron Schneider is an award-winning commercial filmmaker as well as critically acclaimed and internationally published journalist from San Francisco, California. His clients include Verizon, Instagram, The United States Air Force Thunderbirds, and Grammy-award winning band Train among others. Since 2011 he has written over 2000 articles covering the photo, video and consumer technology space for The Imaging Resource, Resource Magazine and Fstoppers.com including hundreds of exclusive interviews, exposés and reviews. Today as the Features Editor for The Imaging Resource, Schneider specializes in evaluating video equipment, computers, storage devices and optics for the modern professional photographer and videographer.