Jaron Schneider is an award-winning commercial filmmaker as well as critically acclaimed and internationally published journalist from San Francisco, California. His clients include Verizon, Instagram, The United States Air Force Thunderbirds, and Grammy-award winning band Train among others. Since 2011 he has written over 2000 articles covering the photo, video and consumer technology space for The Imaging Resource, Resource Magazine and Fstoppers.com including hundreds of exclusive interviews, exposés and reviews. Today as the Features Editor for The Imaging Resource, Schneider specializes in evaluating video equipment, computers, storage devices and optics for the modern professional photographer and videographer. 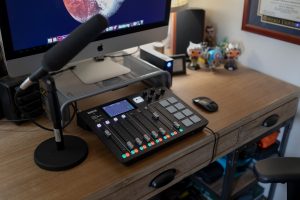 Podcasts are hot right now. If you haven’t thought about starting your own or choosing to take part in someone else’s, you probably listen to one (or several, in my case). Personally, I co-host a podcast with YouTuber Ted Forbes from The Art of Photography, and you can catch new episodes of that show every […]