Well, since I’ve titled my other two “History of Lenses” articles with puns, I figured I’d continue the trend. Although I’ll admit this is the worst. But I loves me some puns.

This is the third and, for now at least, final article in the History of Lenses series. While the technology is still pretty fascinating (to me at least) it will be more fun to go back and start over with the history of cameras themselves. There’s a lot more back-stabbing, finger pointing, and out-of-control egos in the camera developers than the lens developers and I do like to write some daytime-drama-type articles.

But we can’t leave the history of lenses without talking about the most important lens ever designed, the Cooke Triplet. In The Schott Heard Around the World we discussed the sudden surge of quality lenses that came during the period from 1890 to 1905. In Jena, Abbe developed and categorized the new types of glass needed for improved lens design and opened the Schott Glass Works to produce them. Rudolph and Abbe designed a number of lenses that made Zeiss AG arguably the preeminent photography lensmaker in the world. Between Schott and Zeiss, Jena, Germany had become the center of the lens world.

With Zeiss in the lead, lens design became scientific and mathematical. Trigonometry was used to “trace the rays” on paper before anyone ever considered forming lens elements and mounting lenses. In fact, Dr. Abbe decreed that no “trial and error” lens development would take place at Zeiss, only approved mathematical designs would ever be considered for even a prototype. Zeiss and the other German optical design firms were filled to the bursting point with Ph. D.s of physics and mathematics.

Meanwhile, Over in England

Lens design wasn’t quite so scientific. Practical design and apprenticeship to the craft were still considered as important as advanced degrees.

H. Dennis Taylor, for example, began an education in architecture but dropped out to work at Cooke and Sons of York, a telescope maker. He taught himself optical design by reading the works of Henry Coddington and George Airy (of Airy disk fame), two Englishmen who had worked in optics in the mid 1800s. Their work, and his, was done in algebra and calculus, without trigonometry. Taylor’s methods were to do preliminary calculations, fabricate and a prototype lens, test it to find its good and bad points, then go back to his calculations and tweak his design.

The major problem with the lenses of the time remained astigmatism and field curvature near the edges of the image. Taylor realized that if he took a thin positive and thin negative lens of the same power and placed them in contact (Figure 1, left image), they would have a zero Petzval sum (meaning they would have a perfectly flat field). It would also have zero power, meaning it really didn’t magnify or focus the image. If he separated the two elements (Figure 1, right image), however, the lens would begin to have significant positive power, but would retain a zero Petzval sum, meaning the field of focus would still not be curved.

Figure 1: Positive and negative elements in contact and separated.

There was a problem, however. In the previous articles we saw that most lenses of the day were symmetrical about a central stop (aperture), because such symmetry eliminated a lot of aberrations. The unsymmetrical lens in Figure 1 would have horrid lateral aberrations.

Taylor determined, however, that if he split one of the elements in two, mounting each of the split elements on either side of the remaining element, the lens would be more symmetric and the aberrations decreased. He patented both possible combinations in 1893, but preferred the negative element in the center, surrounded by the two halves of the positive element.

In his original designs he attempted used doublets on either side of the central element. When Schott Glass Works released their new catalogue with more powerful glass types, the design developed into three singlets, which is what he patented in 1893.

Because he did a lot of practical bench testing, Taylor found he could modify the position of the elements of the triplet. By moving the central element closer to the rear element, the lens became narrower in angle but wider in maximum aperture. Moving it towards the front made a wider angle of view, but narrower maximum aperture. So the same design could be used to make several lenses of different focal length and aperture.

Figure 3: Moving the central element in relation to the two split elements made the angle-of-view wider or narrower.

The Triplet lenses were difficult to make and manufacture, however. The glass elements, particularly the center element, were quite powerful and the least bit of decentering would cause major problems. The original lenses were made with small set screws holding the center element. Each lens was then carefully calibrated by adjusting the screws at the factory, then the screws set in place using lacquer or cement to lock it into perfect position. (I wish today’s manufacturers would have such standards.) 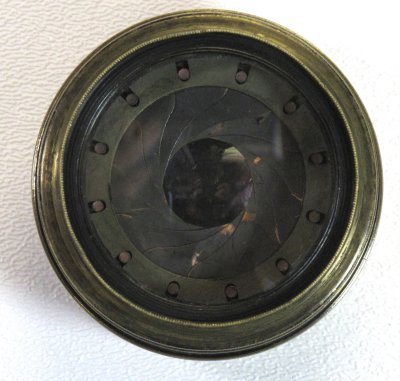 The company Taylor worked for, Cooke and Sons, did not want to enter into the photographic lens business, but did allow Dennis Taylor to approach the firm of Taylor, Taylor & Hobson (no relations) who began to manufacture the lens. Out of courtesy to his employer Dennis Taylor insisted the lens carry the Cooke name.

The design was an amazing success. The lenses were so good that some competitors claimed the example photographs TT&H made with the lenses were doctored. The little company, rather than engaging in mudslinging, simply turned it around and advertised their lenses were so advanced “our competitors don’t believe such sharp photographs are even possible.” They sold all they could make and licensed production to a number of other companies.

Taylor, Taylor and Hobson became so enamored with the Cooke name that they put it on virtually every lens they made. They became a major force in the photography world and later dominated the cinema lens field for quite a while. TT&H was eventually bought by Bell and Howell and eventually became largely an instrument making company. They split off the Cooke Optics Company in 1998, and that company still makes superb cinema lenses in Leicester.

And just to show what a small world it was, even then, Dennis Taylor traveled to Jena in 1895 to meet with Abbe and Rudolph and catch up on the advances in optical glass being made at the Schott Glassworks. While they seemed to get along well, and Taylor (now the Chief Optical Designer at TT&H) bought optical glass from the Schott Works, they certainly disagreed philosophically. Taylor had a 20-year running verbal battle with Abbe and Rudolph in optical journals over the proper way to design lenses. Rudolph and Abbe insisted proper design meant trigonometric ray tracing prior to assembling a prototype. Taylor agreed this showed the potential of a lens, but felt that ray tracing would never allow the designer to correct the weaknesses of a given lens.

Why the Triplet Is so Important

There are a number of reasons. First among them, it was an excellent lens. More importantly, perhaps, it was an entirely different type of design. At the time, most lenses were symmetrically designed around a central stop, like Planar and Double-Gauss designs.

Being different, the Triplet allowed a different set of modifications. Over 80 patents have been issued for variations and modifications of the Cooke Triplet, more than for any other type of lens.

Lenses Derived from the Triplet

Voigtlander used doublets on either side of the central element, creating their Heliar and Dynar series of lenses, which were later copied as the Kodak Ektars.

Other designers soon discovered that putting a negative meniscus lens in front of a triplet group increased the aperture dramatically. This gave rise to the Ernostar and later Sonnar type lenses marketed by Zeiss.

Figure 8: The Sonnar lens design, with a light gathering meniscus in front of a modified triplet lens.

These, in turn, gave rise to all of the original Leica lenses, the Elmars. Many of these lenses remain in production today.

There’s a bit of debate about one other lens, the Zeiss Tessar I mentioned in the previous article

As you can see, the Tessar looks rather like a triplet. Plus, Dennis Taylor did travel to Jena and met with Drs. Abbe and Rudolph before the Tessar was designed. But most evidence indicates the Tessar was a parallel design, not a derivative of the triplet.

The Most Important Part

I’ve already mentioned the most important part of the triplet innovation, but you may have missed it. I mentioned that “By moving the central element closer to the rear element, the lens became narrower in angle but wider in maximum aperture.”

Do you see the incredible importance of this? By changing the position of just the central element, the focal length of the lens could be changed. It is the Triplet, not the other superb lenses designed at the turn of the century, that had this potential. With many more years of development, this would lead to the development of that mainstay of all modern photography: the zoom lens.

Figure 12: By moving the central element of a triplet, a basic zoom lens is created (courtesy Wikepedia Commons).

What took the development of zoom lenses so long, then? Well for one thing, zooms require more lens elements than prime lenses. And each element in a lens reflects light to some degree. Since lens coatings to reduce reflection hadn’t been invented yet, the number of air-glass interfaces in a lens was limited to 6 or 8 before reflection ruined light transmission and contrast.

Who developed lens coatings, you may ask? It was Dennis Taylor. He observed that tarnished lenses reflected less and transmitted more light than shiny new lenses and realized the tarnish was reducing reflection. In 1904, he patented a process using acids and other chemicals to tarnish coat lens elements just for this purpose. However, his method was done by hand on individual elements and not practical for mass manufacturing. Modern coating techniques weren’t developed for several decades — by the Zeiss firm in Jena.

This concludes my little trilogy on the History of Lenses through the turn of the century. I find it amazing that what we consider the ‘best of the best’ prime lenses today: the Sonnars, Elmars, Planars and others were all developed in basic form by 1905.

How good were those lenses? We wanted to know for ourselves so we mounted a 1905 Zeiss Protar to a Horseman Viewcam Movement and a Canon 5D Mk II and took some images of our usual test charts

What we found was rather shocking. The old lens resolved between 24 and 26 line pairs on our test bench, a number that only a few modern lenses like the Canon and Nikon 200 f2.0 lenses can resolve.

That old lens has a maximum aperture of f/8 and a few other shortcomings, but still it is a remarkable performance.

There were a few more designs to come, of course. The zoom lenses were still decades away. The telephoto, reversed telephoto wideangles, and retrofocus lenses also came much later. But if I had nothing in my camera bag but lenses based on designs existing in 1905 I’d be just fine, thank you. In fact, there are already more than a few days when those are the only lenses in my bag – Sonnars, Planars and Elmarits are still about as good as it gets.