Panasonic makes an excellent pair of micro 4/3 pancake lenses, the 14mm f/2.5 and 20mm f/1.7. While they look similar, there are several differences.

The optical formulas are quite different, for example. 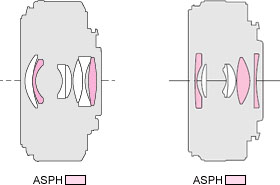 While the performance of both is excellent, like most pancake lenses there is a bit of softness in the corners wide open. 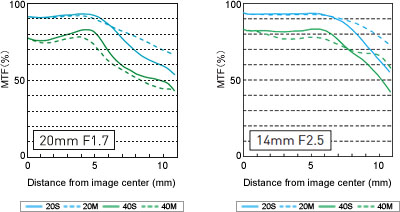 They also differ in focusing method: the 14mm is internally focusing; that is one internal group moves when the lens is focused. The 20mm focuses by moving the entire lens assembly, making the lens physically longer at closer focusing distances.

Both, however, are ‘focus-by-wire’, meaning that when you turn the focus knob you aren’t actually focusing the lens; you are sending a signal to the electronic motor that actually moves the focus element. Probably because only one group is moving, rather than the entire lens, the 14mm has the reputation of focusing more rapidly and being quieter during focus.

There is one other difference that has gotten some attention lately. The 20mm lens is known to cause banding when used on the Olympus OM-D camera. I entered a discussion about this on DPReview, and ended up volunteering to open the lenses and see if we could find anything that might contribute to the banding.

If you don’t like reading geeky stuff and looking at undressed lenses, the answer is we didn’t, so you can move along now. For my fellow geeks, though, let’s have a look inside.

Open Them Up Already

Looking from the mount side, the lenses show a lot of similarities. Same 3-screw light baffle, same 3-screw mount, and the same electronic connector (DUH). 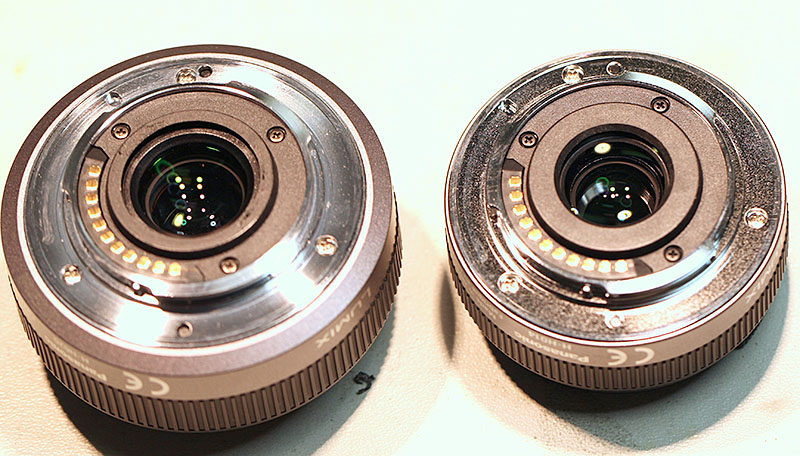 Removing the light baffle led to our first surprise, and we’ve now renamed the 20mm lens The Jack-In-The Box. 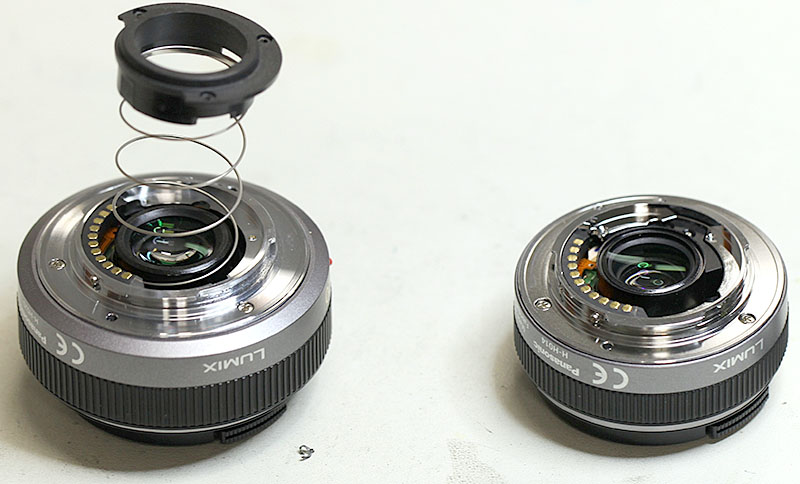 The spring has something to do with the fact that the lens assembly extends for close focusing. Whether it helps the motor move the lens, or the motor only moves the lens back and the spring moves it forward, I can’t say. But if you put the lens back together without the spring, it doesn’t focus. (Pretty simple way to figure it out, huh?)

OK, back to work. Removing the mount is straightforward and shows the rear barrel assemblies are about identical except for size. 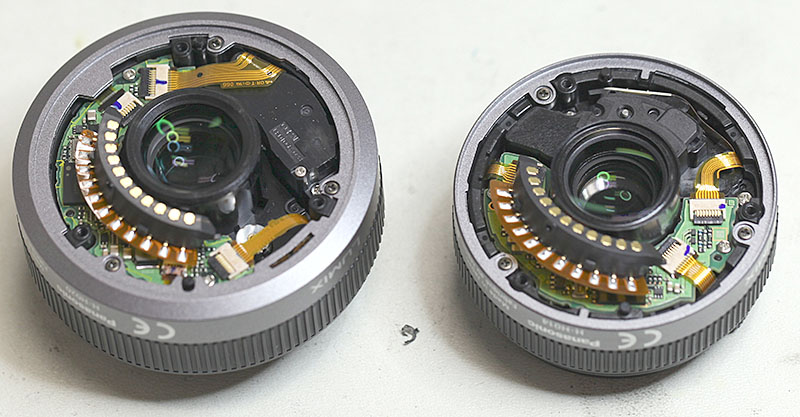 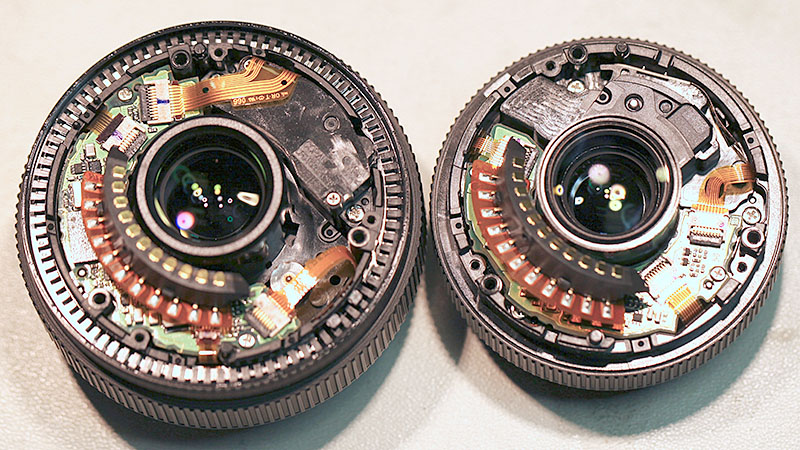 Three screws take the rear barrels off, fully exposing the PCBs (main circuit board). You can see the focusing motors for both lenses in similar locations, although quite different in size, as you would expect. (Remember, the 20mm has to move the entire lens, not that it’s a huge thing to move.)

One significant difference does show now. Notice on the 20mm (left) the toothed pattern along the manual focus ring. The 14mm has a similar arrangement, but it’s a layer deeper. As we’ll see later, the teeth pass through an optical sensor that then sends focusing signals to the AF motor when you turn it.

Here’s a close-up of the sensor and teeth in place. The flex cable connects the sensor to the main PCB. 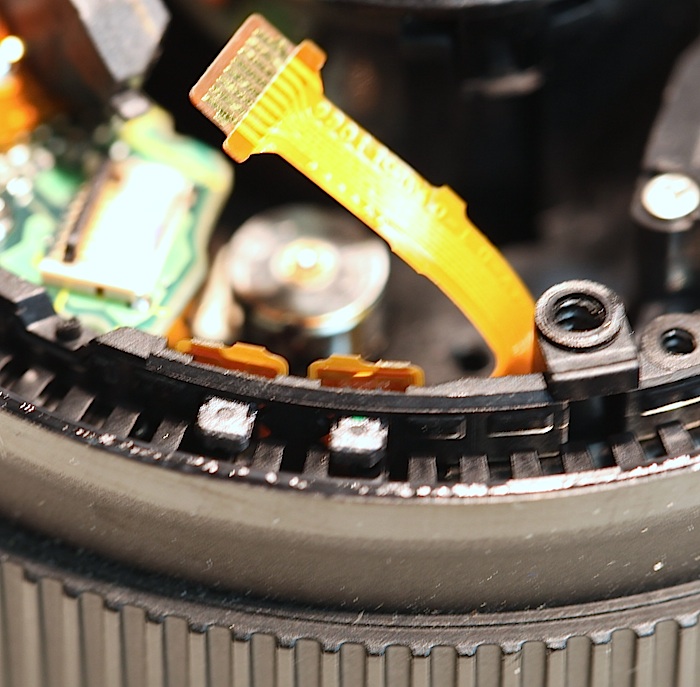 Removing the PCB cleans things up a bit but doesn’t really show anything new. 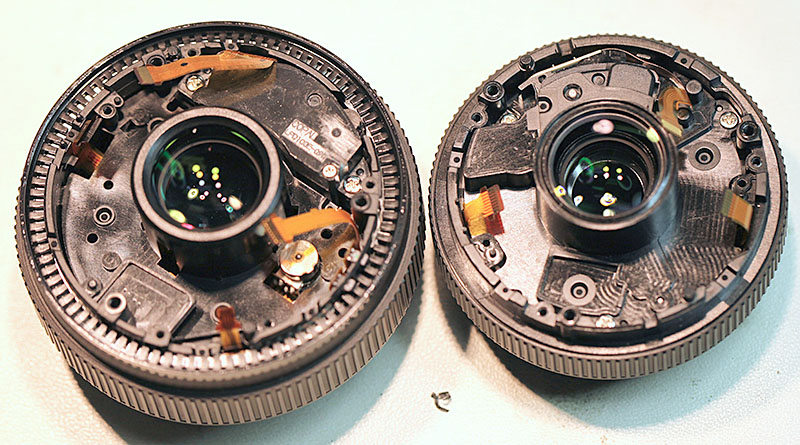 Removing the 3 screws from the 14mm lets us remove all of the optics and motors in one piece; they drop right out of the housing. If we flip it over we’re looking at the front element. Now we can see the focusing motor at the top, and the brass gear of the aperture motor. The screws tell us there’s some further disassembly we could do, but that would almost certainly involve taking out the aperture blades and other things that are really time consuming. 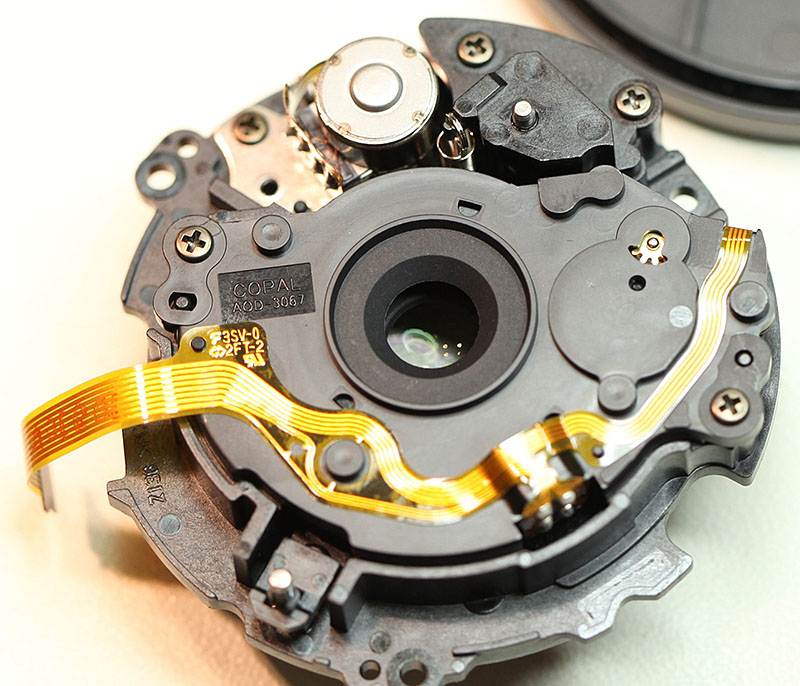 As an aside, now that the main lens assembly is removed we can see an identical optical sensor and toothed focus ring, like the one on the 14mm. It’s simply set forward and inside the lens case, so it’s less apparent from the back. 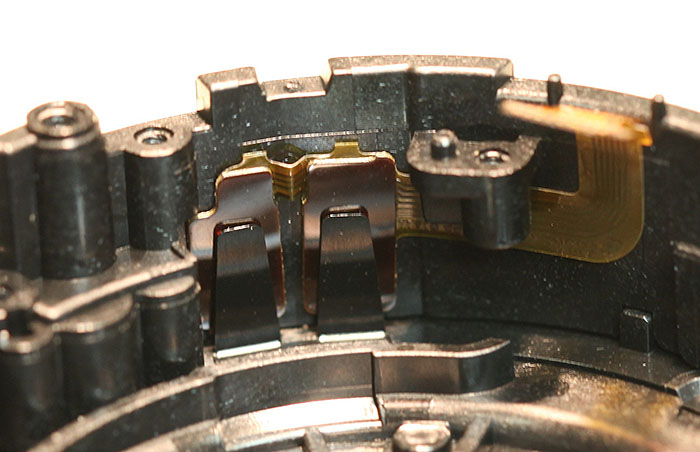 Optical sensor from behind.

The 20mm has another ‘something different’ for us: the focusing ring is held on by a large retaining ring that easily unclips, letting us slip the external focus ring off. 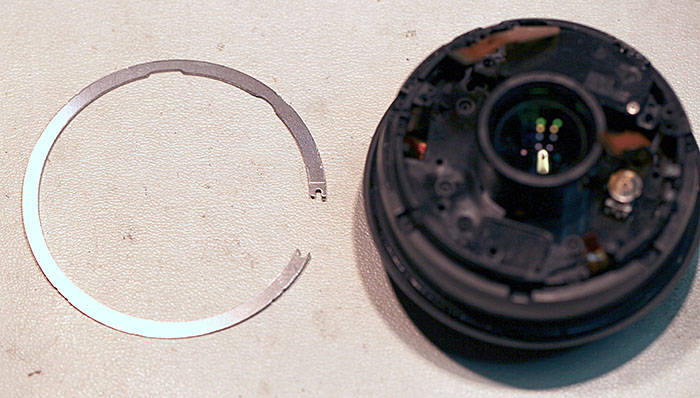 Which then lets us remove the focusing motor. It’s rather unremarkable. 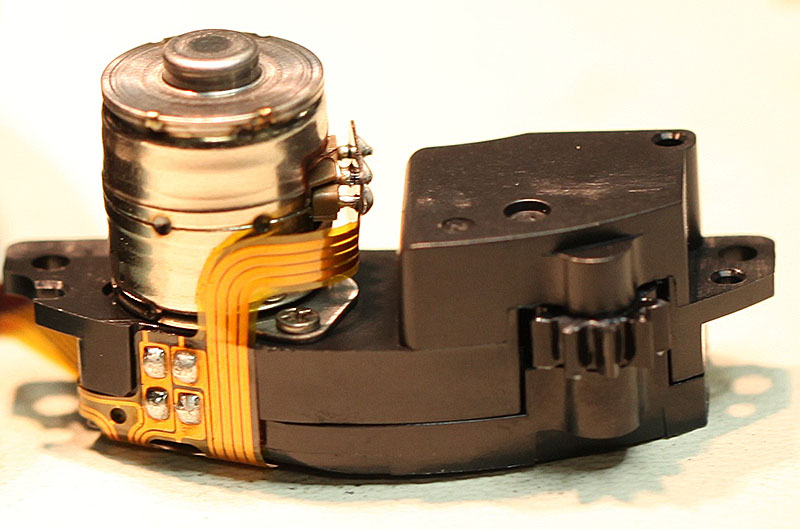 The main part of the lens still sits in the lens housing. 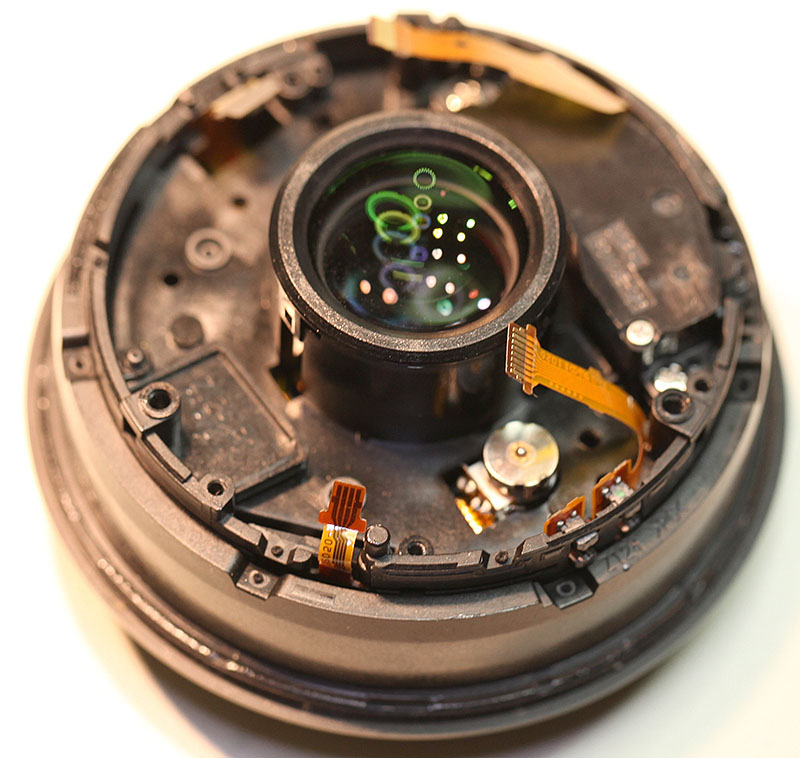 Notice the small, square posts with holes in the center that are set in the focusing ring; you can see 4 of them in the image above. We can lift the central part of the lens out of the housing now, which shows us the grooves in the focusing ring. Pancake lenses don’t have helicoids; the lens slides forward and backward during focusing because when the ring rotates, curved grooves inside move the lens backward and forward.

As with the 14mm, we chose not to disassemble the internal elements. There are no apparent optical adjustments that can be made and disassembling the diaphragm is time consuming.

I don’t think our little dissection shows anything that is directly attributable to causing banding, because I would expect it is some electronic component on the main circuit board, which is well beyond our capabilities to analyze. The 20mm does have a larger AF motor that is less well shielded, but I doubt this has anything to do with the problem – the motor isn’t running when people are taking photographs.