A while back we did a series of articles and found that certain Canon lenses on the newest Canon cameras (5DIII and 1Dx) autofocused more accurately when tested for single shot stills using center point AF only. These combinations acutally had as accurate AF as what we could obtain with Live View.

To emphasize, though, we’re only testing AF with center point for still shots in a lab. It hasn’t got anything to do with Servo mode, zone focus, etc.

With the 6D being released we had, oh, about 6,593 people ask us if the autofocus system would be as accurate as the 5D III, or more like the 5D II. Obviously the 6D doesn’t get the whiz-bang 61 autofocus points. It gets 11, with 1 cross type rather than the 41 in the 5D III. But people were hoping that center point might be supercharged.

Now I’m rather cynical and was pretty certain the intro level camera was not getting the top level AF system, but when the first dozen 6Ds came in today, it seemed like an easy thing to check. For those of you who aren’t in the loop, the previous Canon cameras test results are here.

We used exactly the same methods we have before, using a 28mm f/2.8 IS lens since we knew that was one capable of the more precise autofocus. We repeated the test on 2 cameras using 2 lenses for 2 runs. All were identical and a typical run is shown below with Live View results in blue, standard phase detection in red. 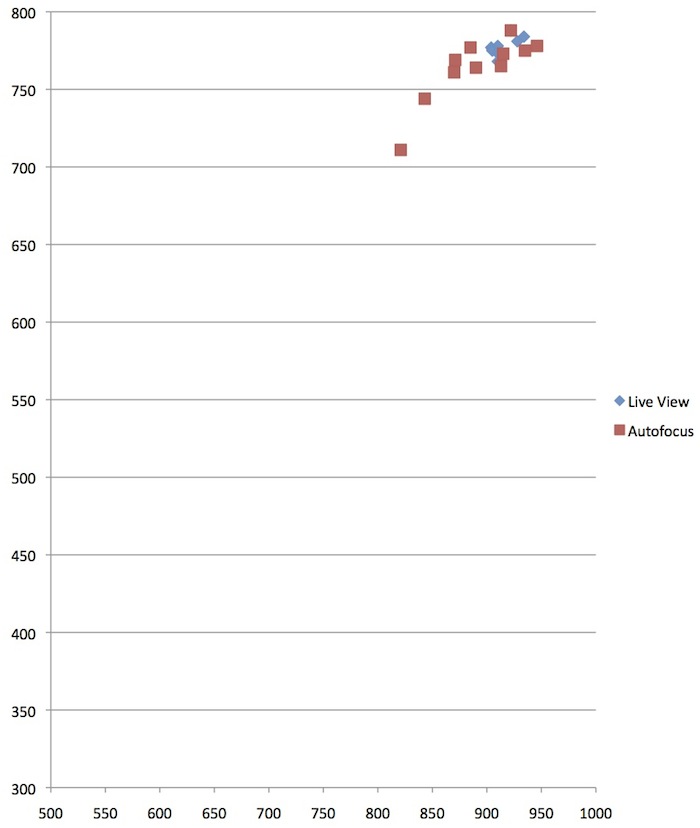 As we did with the other tests, we checked the standard deviation of the Live view shots (10) to the phase detection AF shots (28).

The bottom line is the 6D AF is about identical to what we saw with the 5D II as far as center point accuracy. It may be worlds better in low light, or Servo mode, or with peripheral sensors. I can’t comment on that. And actually I didn’t find the 5DII center point AF bad at all.

But the 5D III, along with the 1Dx, are more accurate in this test.

Tweet
Posted in New Items
Not Surprisingly, D600 Dust Issue Gets Better Over Time
A Peek Inside the 6D