It’s not  falling that hurts, it’s the sudden stop at the end. 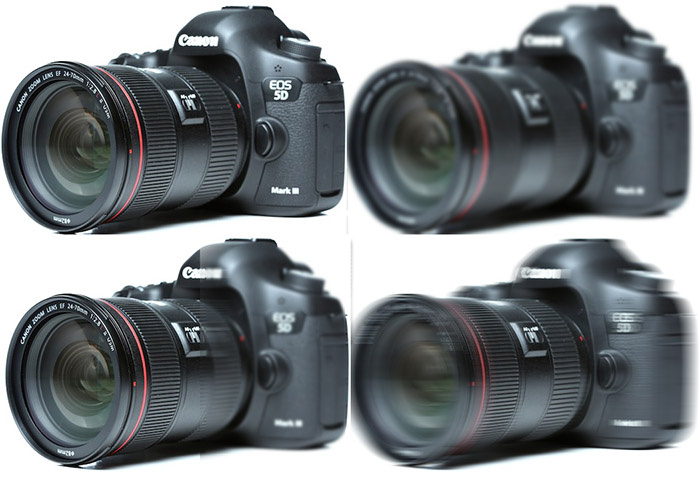 Understandably, people are concerned with whether a new lens they buy is functioning properly and optically within specifications. One thing I harp on is that we also need to watch our lenses over time. Bumps, drops, and normal wear-and-tear can affect a lens optically.

A fair number of pro photographers take advantage of annual ‘clean and check’ services to help keep their lenses in the best possible shape, but other people never find this kind of thing necessary. As usual when there are two different schools of thought, both are correct. Most people don’t ever need to worry about an annual check-up, but it sometimes is worthwhile.

I’m going to use, as an example, some of our data from Canon 70-200 f/2.8 IS II lenses. I choose this lens for a couple of reasons: 1) we have a lot of copies and 2) it’s a high-resolution lens so getting a bit out of sorts may not be apparent at a glance. This lens is NOT chosen because it gets out of adjustment more often than others; it’s about average in that regard.

Let me also make clear that chances are an individual may never see this happen to one of their lenses. I’m always amused when I write about something like this and some fanboy immediately replies ‘my lens never had a problem.’ That’s cool. I’ve got thousands of lenses that never had problems. But about 10% of rental lenses do get out of sorts optically. While rental lenses get abused a lot more than individuals’ lenses, it’s inevitable that this will happen to some lenses in the real word, too.

It’s also fairly easy to fix, although it will usually require a trip to an authorized repair center to get it done.

A Lot of Imatest Data

We test all of our lenses regularly, by photographing test charts, by using Imatest, and more recently by also testing on an optical bench. I’ve summed up the effect of a year’s worth of abuse on slightly over 200 copies of the 70-200 f/2.8 IS II in the graph below. When we put these lenses into service all of them had acceptable results – that is they started the year within the red box.

In the graph, I’ve plotted each copy’s worst results during a year’s heavy rental use. (The graph, for those who aren’t used to my articles, shows MTF 50 in the center of the lens along the horizontal axis, and weighted average MTF 50 on the vertical axis, measured in line pairs / image height from raw images.) I’m showing results at 200mm. The results at 70mm were similar. 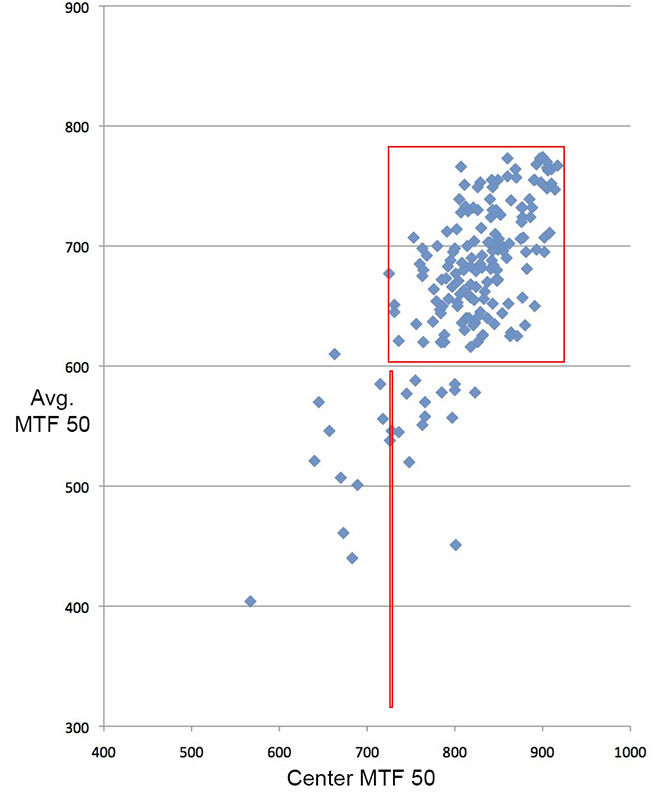 It’s pretty obvious that 26 copies (a bit over 10% of all copies) lost their optical edge at some point during a year of heavy use with a lot of shipping tossed in.

How Significant a Problem?

How much difference does it make optically? Looking at these graphed numbers you would probably think not too much. You’d probably be right.

First, if you look at the vertical red line I drew, every copy that was out of the box but to the right of the red line still has normal center sharpness. That’s not too surprising; many types of decentering affect the corners and edges but have little effect on the center. Since many people are using a 70-200 f/2.8 lens for action shots, shooting centered subjects, they may not notice soft edges or corners.

Even many of the other copies might pass routine inspections. A resolution of 700 / 500 line pair per image height is as good as a lot of lenses get on a good day. Unless you were comparing copies of the 70-200 f/2.8 IS II you might not notice a problem with copies that were resolving 700 /550 line pairs per image height. If you took careful test chart images you’d see that there was astigmatism (horizontal and vertical lines aren’t resolved equally) or that one area of the lens didn’t resolve as well as others.

The 4 lowest lenses on the graph had obvious problems that anyone would have noticed, although one of those 4 still remained sharp in the center. The 6 lenses above those but well to the left of the red line all had a soft side or corner that you would have noticed if you checked sides and corners. The others you might, or might not, have thought had a problem if you shot with them extensively.

If It’s Broke, You Can Fix It

If, as I claim, the lenses outside the box aren’t as good as they ought to be, then it should be possible to improve them. Aaron and I performed optical adjustments on each of the ‘bad’ copies and the results are shown in the graph below. 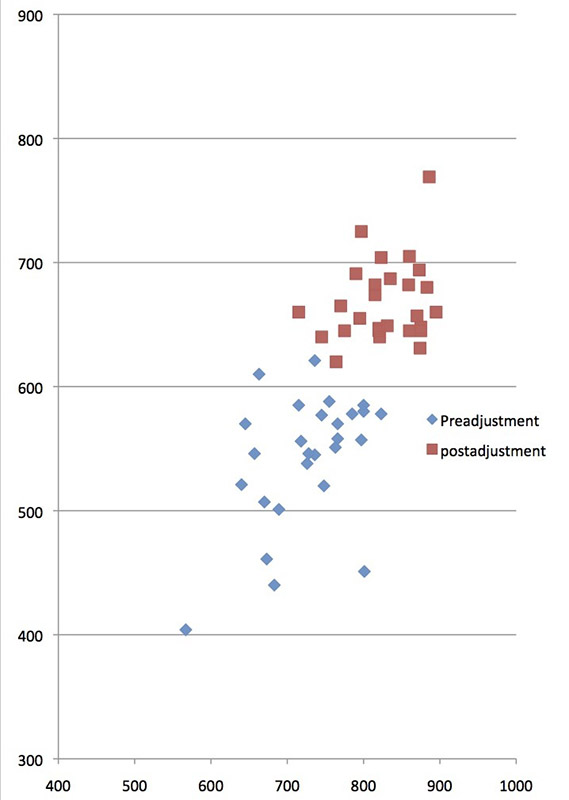 If you look carefully, you’ll see there is one fewer red dot than there were blue dots. One copy is off at Canon because it needed more help than we could give it.

As far as causes among the 25 lenses we adjusted, three had broken collars (the nylon bearings that hold the elements in their helicoid track). The others simply had an element that required recentering, tilting, or spacing.

Many of these elements slide up and down in helicoid tracks during focusing and zooming; wear and tear can eventually move them a tiny bit and rental lenses are heavily used lenses. Other elements may shift a bit with a bump or jar, affecting the optics of the lens. A tilt or decentering of one element by less than 1 millimeter is enough to devastate the optics of a lens.

Just for another look, I’ve put the ‘after adjustment’ values back into the first graph. Now that’s much better!! 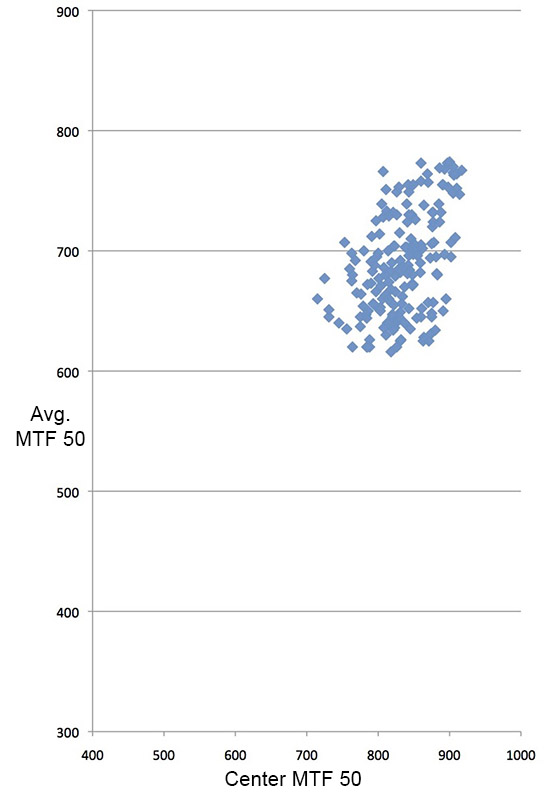 The same lenses as in the first chart, after the problem lenses had been adjusted.

A Couple of Thoughts

Does this matter to any of you? It will to at least a few of you at some point in your photographic journey. If you have a lens that seems to not be quite as sharp as it once was, a trip to factory service for a makeover is probably worthwhile. Remember, these changes are fairly subtle, often affecting only the corners or edges, or just increasing astigmatism.

I suspect sometimes people don’t really notice their lens is slightly decentered. They just don’t like the pictures it makes quite as much as they once did and use it less frequently. People may just decide they’ve gotten tired of that focal length or that particular lens without really checking to see if it’s slightly out-of-spec. Lenses with astigmatism will do that, particularly. The images just don’t quite look right but it’s hard to put your finger on why.

I’ll also answer a couple of questions I suspect some people will be asking. The first will be: Can you do this at home? I don’t think so, at least not on a lens like this. Optical adjustment on this lens, for example, requires disassembly, partial reassembly leaving off part of the barrel to expose the adjustable elements, then some careful time with a lens test projector or other optical testing equipment (shooting test charts won’t cut it for this), and finally reassembly.

That may also answer the question I see online every so often, “Why did they charge so much for an optical adjustment”? It takes us 1.5 to 4 hours to adjust one of these lenses. I’m sure the factory service center can do it faster, but it’s still a fair bit of work.

The other question someone will ask is: Can adjust the lowest ‘passing’ lenses to be better and bring them all up to the top scores? To some degree it’s possible. But remember adjusting to be better at 70mm may cause problems at 135mm or 200mm. Adjusting them to be great at 20 feet focusing distance may adversely affect infinity. It’s a balancing act, trying to get the best resolution overall.

A saying from one of my previous careers is really appropriate to lens adjustments — Better is the enemy of good enough. I can’t tell you the number of times we’ve decided that a lens was pretty good, but maybe we could just tweak that upper right corner at 70mm a bit. After we ‘improve’ that corner at 70mm, we spend the next 3 hours desperately trying to fix the center at 200mm, which was ruined by that 70mm corner adjustment.