I sure can’t tell you if a lens is worth $12,000 by running a few Imatest numbers, but I might be able to tell you if it sucked. So when we got our first 200-400 f/4 IS lenses in, they went straight back to the lab, along with some other lenses for comparison purposes. 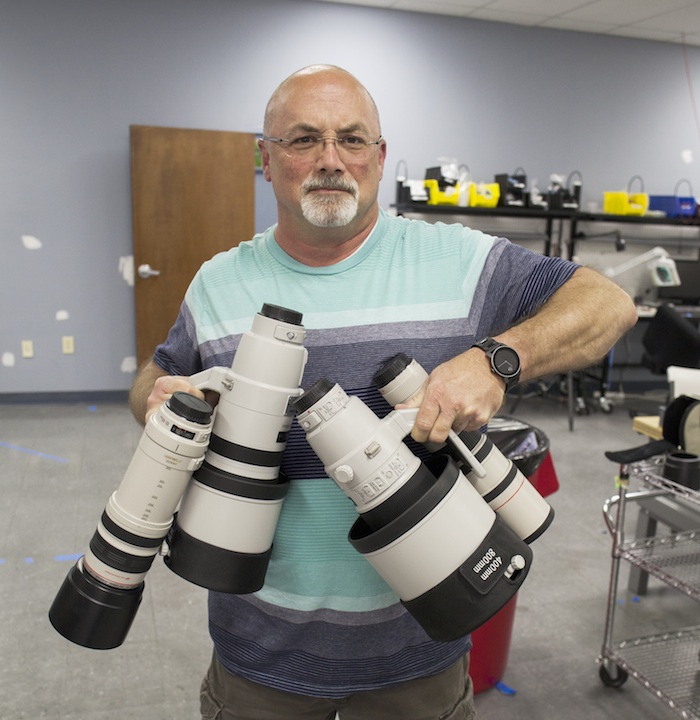 First, I need to be clear we have some limitations in our Imatest lab. Because of space and target size we’re limited right now to a maximum testing focal length of 400mm, so I can’t do a 560mm test with the teleconverter in place. But we had some reasonable options for testing at 400mm: the 400mm f/2.8 II, which is probably the sharpest telephoto lens made right now; the Canon 100-400mm, an older but classic design; and the 400mm f/5.6L prime lens, another oldie-but-goodie lens. My thinking was at this price the 200-400 should be nearly as good as the 400mm f/2.8 and clearly better than the other two lenses. 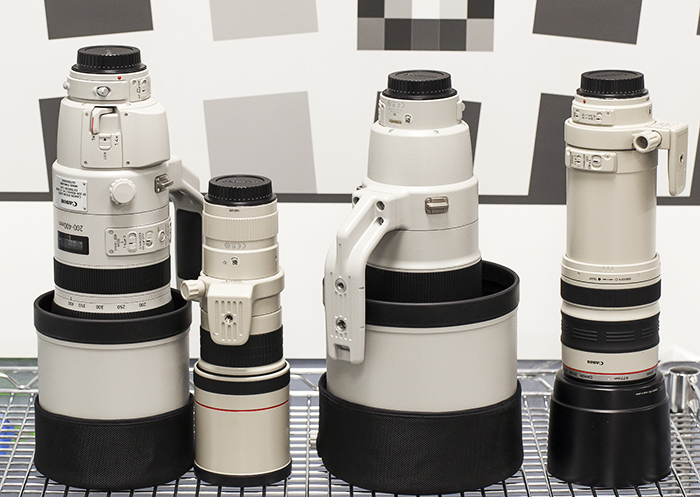 Or to give you a better perspective, here’s the entire current Canon Supertelephoto lineup (reproduced with permission from TheDigitalPicture.com). The 200-400 is the 4th from the left, with the 400 f/2.8 II on it’s left and the 500 f/4 on the right.

I shot around with all of them and thought that, perhaps, the 100-400 was just a bit slower to autofocus than the others, but it wasn’t a dramatic difference. Since I shoot the 100-400 frequently and find its AF speed quite acceptable, they certainly all pass in my book. Shooting handheld around the office, there is no question the IS on the 2 big lenses was far better than that on the 100-400. Despite their weight I actually got sharper pictures at 1/30 or so with the big lenses.

I’ll cut to the chase and post the MTF50 results from all of the  lenses in table form. Because of time constraints (all of the first copies of the 200-400 we received today had customers waiting for them, so they had to be in the shipping department by lunchtime) I could only test at one focal length – setting up Imatest for telephoto work is quite time consuming. Results are, as usual, MTF 50 measured in line pairs / image height on 5D Mk II test cameras. They are given as center point, weighted average over the entire lens, and average of the 4 corners.

Of course resolution decreases with a teleconverter, it always does. But even with the teleconverter active the 200-400 still resolves about as well as a 70-200 f/2.8 lens, which is really excellent. I also suspect that if we had the ability to test at infinity the numbers would be even better; teleconverters are designed to work at longer distances, not the 35 feet of our test range.

I can’t say whether it’s worth the price or not, but I can certainly say it’s the sharpest zoom lens I’ve ever seen (correction – as Rick pointed out, the 200-400 is roughly tied for highest resolving zoom with the Canon 24-70), with image quality rivaling the most expensive primes.