OK, I’m not sure what the official name of the new 120-300mm f/2.8 lens is. I think Sport is probably best, since it’s got that designation in the new Sigma lineup. On the Sigma website it gets called the OS S. The guys around here call it the 120-300 A1, since it’s one of the lenses that go through Sigma’s new ‘A1’ quality assurance and testing. (Don’t ask me why they named their QA program after my favorite steak sauce.) Of course, people also refer to it as the OS Mk II. 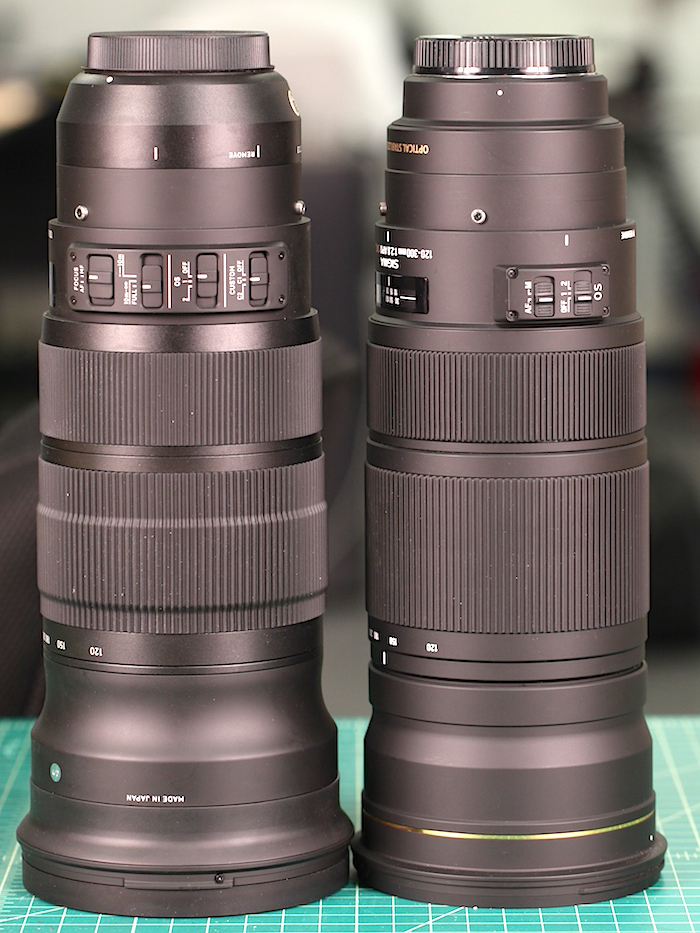 The 120-300mm f/2.8 OS has pretty much summed up my long-term love-hate relationship with Sigma. How could I not love an f/2.8 zoom in this range with great optics? How could I not hate that for 2 years it’s been our most frequently repaired lens, lasting an average of 13 weeks before going back to the factory?

But there’s no question Sigma is different now. The repair service has greatly improved. Sending a 120-300mm f/2.8 in for repair a couple of years ago might mean it was gone for months. Now they’re back in a couple of weeks, and fixed at a reasonable price. They’re releasing world-class lenses right and left. They’ve given us unprecedented control with the USB dock. And they state they’ve improved quality control.

But I have to admit after my frustrations with Sigma 120-300s and 50-500s over the last several years, I have to admit I feel like Charlie Brown listening to Lucy promise to not pull the football back this time.

My usual disclaimer applies: I’m not a lens reviewer and this isn’t a lens review. This lens is frequently used for rapid-fire action shooting requiring critically accurate autofocus, so thorough assessment will require in-depth evaluation by someone far more skilled in that type of shooting than I am. But I can contribute some evaluation of features, stationary optics and construction quality.

After using the USB dock and software to set up a few copies, I was impressed. When you plug the lens in the dock and open the software you get a nice splash page that will update firmware if needed, or let you choose to fine tune autofocus or adjust customizable options. 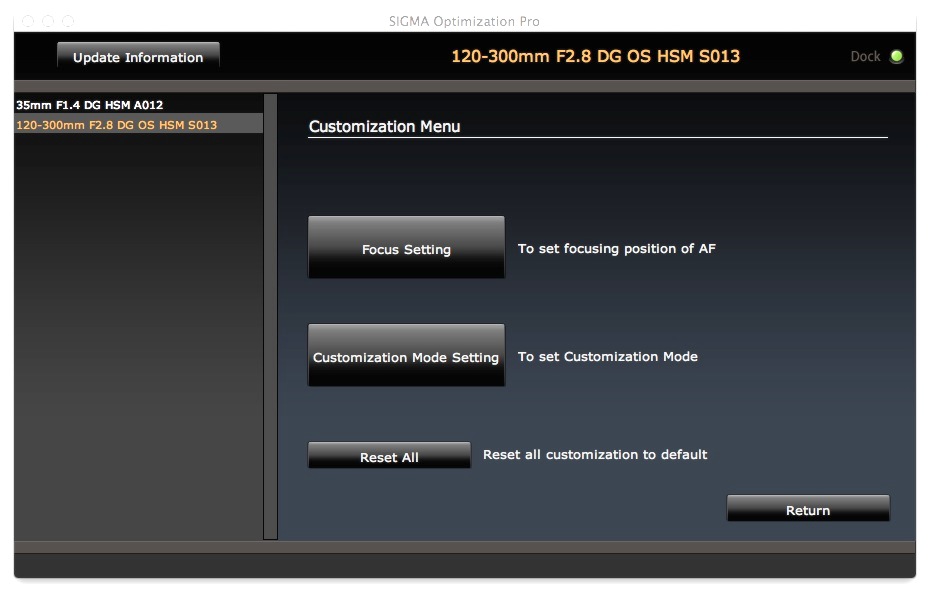 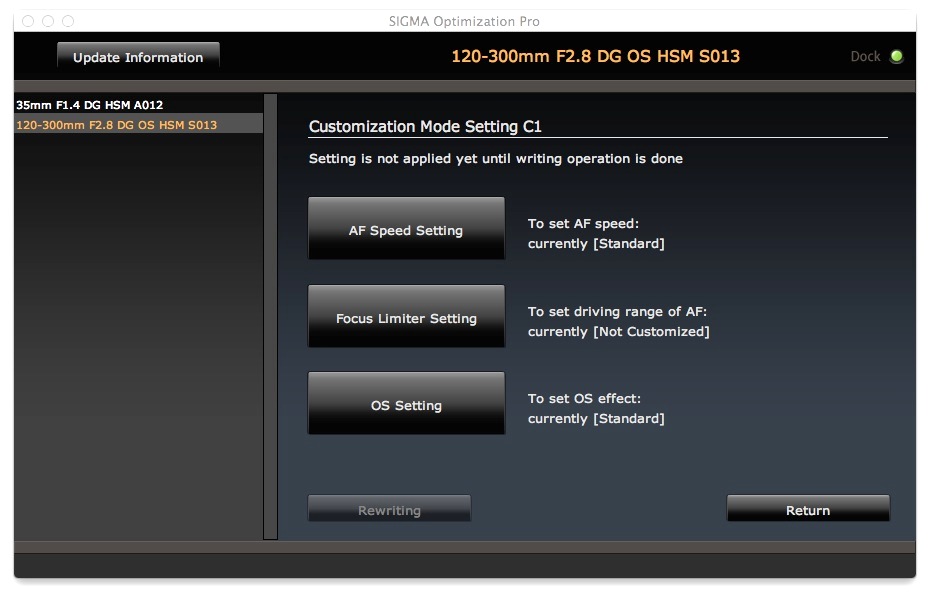 AF Speed adjustment is straightforward: you can choose standard, speed-priority, or accuracy priority.  We did the simple thing and timed the lens from minimum focus to infinity focus. Standard speed took 0.95 seconds, while speed priority dropped this to 0.7 seconds and accuracy priority increased it to 1.1 seconds. Measuring change in accuracy will require someone with more capabilities than I have, but the nice thing is you get two custom options on the lens so you could set C1 to speed priority and C2 to accuracy priority and switch on the fly if needed.

The focus limiter adjustment is nicely done with a simple slider you can adjust in case the default 10 meter to infinity limiter isn’t ideal for you. 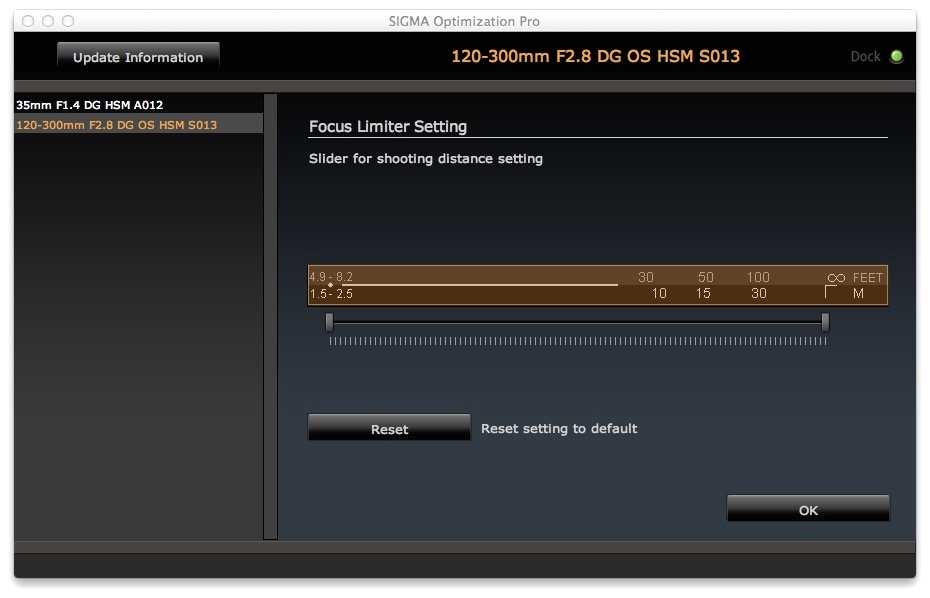 The OS customization page left me confused. You can read it and explain it to me if you understand it. I will say I tried all three settings and you can tell a difference in the viewfinder as far as the image appearing more ‘locked in’ with Dynamic mode. Taking pictures, though, I didn’t see any obvious difference in the amount of stabilization I was getting, but this was very limited testing, shooting still targets handheld after a fairly massive coffee intake. 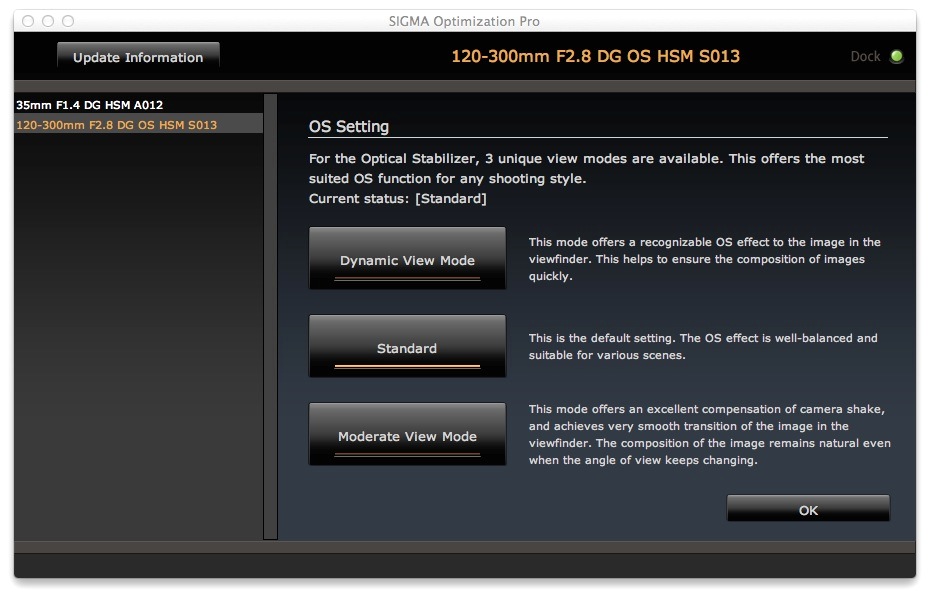 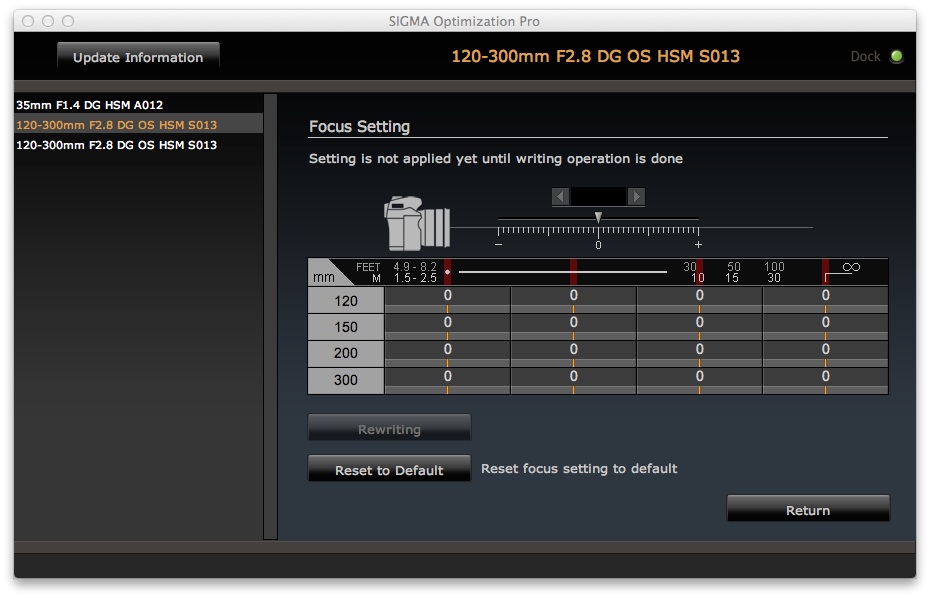 Now I totally realize that half of you are so excited about this you can hardly stand it, half of you think this is way too much work, and the other half have mixed emotions about it. Here’s my take having walked about 500 people through using this lens. Occasionally the 120-300 clearly back or front focuses everywhere. If that’s the case, microfocus adjustment on your camera will work just fine.

More commonly, people notice a problem at one end of the zoom range and/or one extreme of focusing distance. It really shouldn’t take you more than half an hour to go shoot some appropriate test shots and see if your lens has such an issue. If it does, fix what needs fixing and leave the rest alone. From long experience with multiple copies of this lens, I expect most people will have a final window with 3 or 4 boxes in one corner requiring some adjustment and the rest zeros.

One thing I will add that I’ve only recently learned from Rich Meston at Focal: The Sigma 120-300 has significant focus shift, so those of you who want to shoot it at f/4 or f/5.6 may need to make more significant adjustments to compensate for that. However, make sure you want to shoot at that aperture all of the time, since such adjustments will probably throw off your autofocus wide open. I truly believe the past problems with front and back focus at various focal lengths on different cameras can now be fixed by anyone who’s willing to spend a little time setting up. I love the “C” button that lets me use the dock to customize AF speed and OS. I can’t say how the autofocus and OS system customization will work out, but it is nice to have those kinds of options. Certainly a lot of people will benefit from being able to set the focus limiter system to whatever distance they like.

Until recently our Imatest lab wasn’t set up to handle a lens of this size so I never optically tested the original version of the 120-300mm f/2.8 OS. Since I’d recently tested some of the new Canon Supertelephoto lenses, though, it seemed reasonable to see how the Sigma compared with them. (Just in case you didn’t know, there is no need to do optical comparison tests between the old and new versions of the 120-300 f/2.8 OS because they are optically identical.)

Just for convenience, I’ve created a table of the various options to the Sigma in Canon mount since that’s what I’ve been testing recently.

No question why the Sigma is an attractive option to the Canon 300 f/2.8 IS II when you look at prices and consider that it zooms. With a 1.4x teleconverter it also makes an attractive alternative to Canon’s 200-400 f/4 lens. Now let’s see how it compares with those other lenses optically.

As usual, tests were done in our Imatest lab at distances of 25 to 35 feet — results may have been slightly different at infinity. The table below shows the Sigma 120-300 f/2.8 at 300mm. Because it isn’t really fair to compare a zoom lens to a prime, I also added the results of the Canon 70-200 f/2.8 IS II lens tested at 200mm to give a comparison to another zoom.

The results aren’t too surprising: the Sigma is not as sharp as a $6,000 prime lens, but it’s still very good. It’s very close to one of the sharpest zooms made, the Canon 70-200 f/2.8 IS II. Could you see the difference between the three lenses? Yes, you should be able to if the images were side by side in a reasonably large print.

But I sure can’t tell you if the difference between the Sigma and Canon is worth the money to you, nor can I say whether the Canon’s lighter weight or the Sigma’s zoom capabilities are going to be important to you. Certainly the Sigma will be plenty sharp for most people.

The other comparison I’ve been asked to make several times was to compare the Sigma with 1.4x teleconverter to the Canon 200-400. I had planned to test with both the Sigma and Canon 1.4x converters, but we were completely out of stock of the Sigma, so for this test the Sigma is mounted to a Canon 1.4x TC III. The Sigma might have done better (or worse) with a Sigma teleconverter. To give a reference point, I’ve included the Canon 100-400 IS L zoom at 400mm, too.

Adding a teleconverter reduces resolution as always, although not quite as much as I had expected, honestly. Even with the converter in place, the Sigma does a bit better than the Canon 100-400, which is a very good performance indeed. The 200-400 is much better, but at that price it should be. The bottom line is I think most people would be very happy with the Sigma’s resolution, even with a 1.4x teleconverter.

There’s nothing shocking here. The Sigma 120-300 f/2.8 is a very sharp lens. It’s not as sharp as lenses costing far more, but it’s certainly  very good.

The USB dock / Optimization Pro software is really cool. My playing with it in the lab is not the same as people using it for weeks in the field, so I don’t want to make unjustified conclusions, but it seems likely to make the lens more usable than the original version was.

Would I pay the difference to get the new Sigma when the old version is $1,000 cheaper? Absolutely not if I already had a copy I was happy with. The optics are identical and if you’re happy with your version you probably don’t need the features of the dock and software.

If I was trying the lens again after being unhappy with a previous copy, or buying for the first time . . . . well, to me it would really come down to whether the new version is also more reliable. I like the programmability, I really do. But this is a steep upgrade price for that alone. On the other hand, if build quality and reliability is better, then yes, I’d pay the difference.

So, guess what? (Yeah, you knew this was coming.) In Part II we’ll do a side-by-side teardown of an old and new version of the 120-300 and see what differences we find.