Photography companies love catchword marketing. They like catchwords because photographers make assumptions about what those words mean, even though the words really don’t mean anything. So basically, they say nothing, but it makes you believe something.

Two of my favorite examples are “professional quality construction” and “weather resistance”.  When I read those terms, my brain translates them to “Blah, blah, blah. Blah, blah.” They are subjective terms, just like ‘elegant design’ and ‘innovative styling’.

Most photographers, though, make all kinds of assumptions about what those catchwords mean, and have all kinds of expectations about the equipment that is described by these largely meaningless bits of marketing. We all know what Oscar Wilde said the word assume really means. Expectations, of course, are simply a down payment on future disappointment.

I have watched several world-class internet meltdowns with great amusement recently. All were started when photographers found out that their assumptions and expectations about what catchwords meant were wrong. They became a firestorm when people added a lot of ‘facts’ that weren’t really facts.

Much of the recent internet rioting was triggered by some Olympus 12-40 lenses that broke off at the plastic mount (the mount is the internal part of the lens where the bayonet — the metal part that twists into the camera — attaches by several screws). Several people reported their lenses broke at the mount with minimal force applied (a short fall or even pressure from other items in a camera bag). We ship those lenses all over the country and they seem no more likely to break than any other lens we stock. But apparently at least some of them had a weak mount.

What amused me was the absolute fury expressed by numerous photographers that a “professional quality” lens might have a plastic mount. I’ve looked up the term ‘professional quality’ everywhere and nowhere have I found it defined as ‘having an all-metal mount’. But some people are livid that it isn’t so. If you’ve read one of these posts on the internet lately, you’ve learned all kinds of things. . . none of which are true.

I take apart lenses all day every day, so I was rather amazed to find all these facts spoken so dogmatically by people who claimed them to be absolutely true. I make it a rule never to argue with people who claim absolute knowledge, no matter how wrong they are. But I will occasionally show them pictures. So here are some pictures of the mounts of lenses that Aaron and I took apart for various reasons this morning.

Canon 35mm f/1.4 L lens. Released in 1998 (15 years ago), considered a Professional Quality lens, and certainly carrying a professional quality price. It has a plastic mount. In fact, we keep that mount as a stock part because we have to replace it every once in a while. It doesn’t break often, but we have hundreds of them and they do break once in a while. 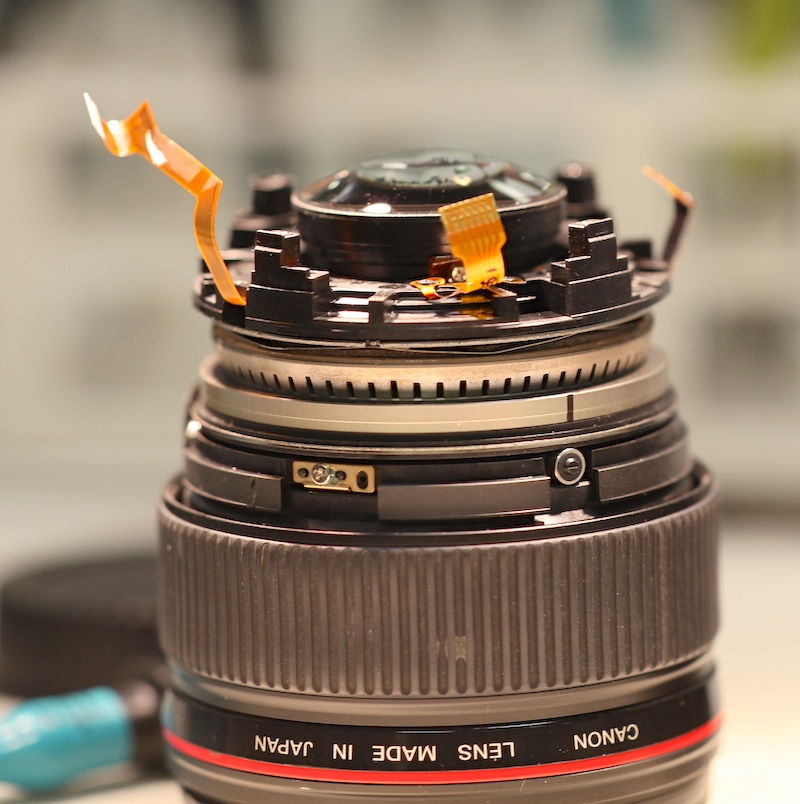 Panasonic-Leica 45mm Macro Elmarit f/2.8 m4/3 lens. I won’t argue about whether it’s a Professional lens, but it’s really good, really reliable, and quite expensive. It has a plastic mount despite online claims otherwise. 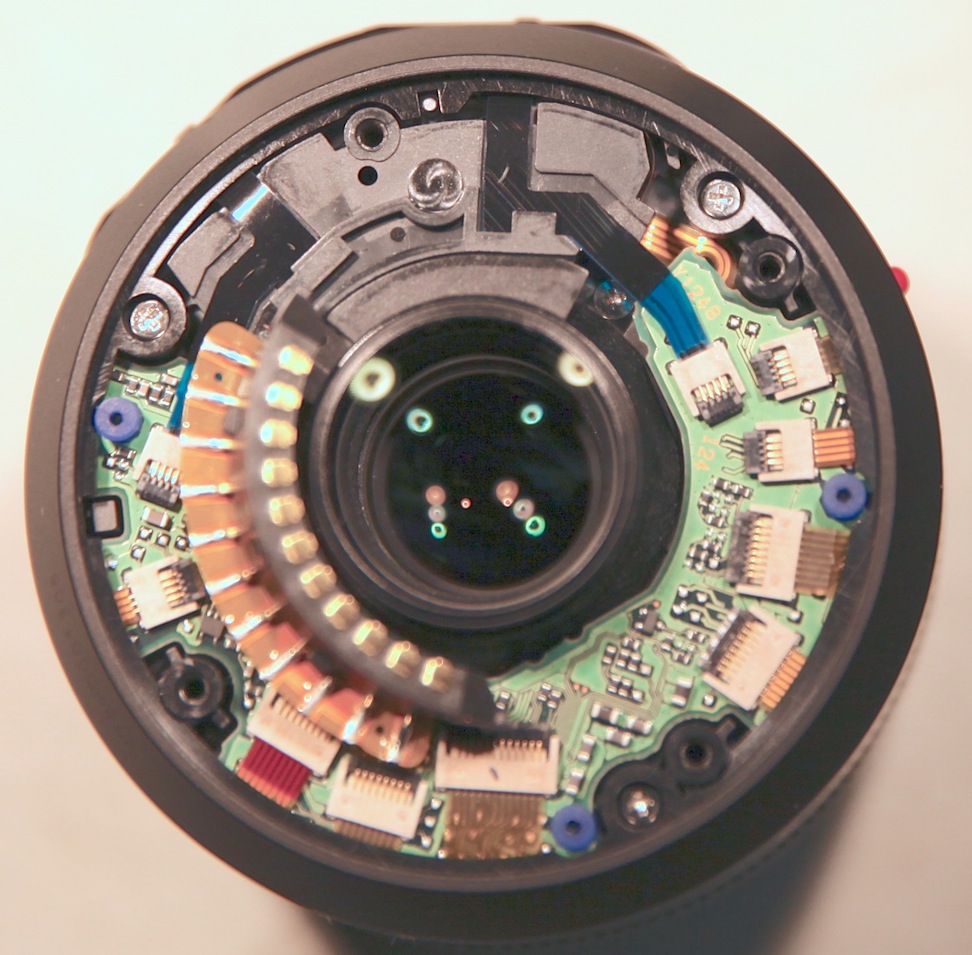 Panasonic-Leica 45mm. The 4 empty plastic holes are where the bayonet attaches. The 3 screws still in place attach this plastic piece to the next plastic piece in the lens barrel. 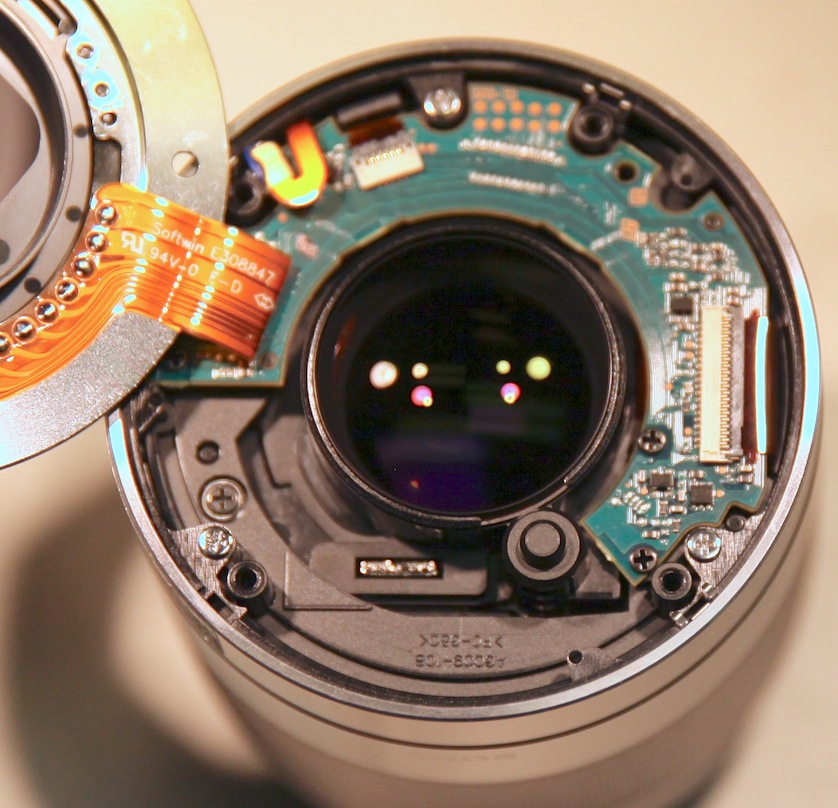 Sony 50mm f/1.8. The 4 hollow plastic posts are where the screws from the bayonet attach.

Canon 14mm f/2.8 Mk II L. I don’t think anyone argues this is a Professional Quality lens at a very professional cost. An ultra-reliable lens, but it certainly has a plastic mount. Not that we ever have to replace them. They never break here despite being far larger than the Olympus 12-40mm. 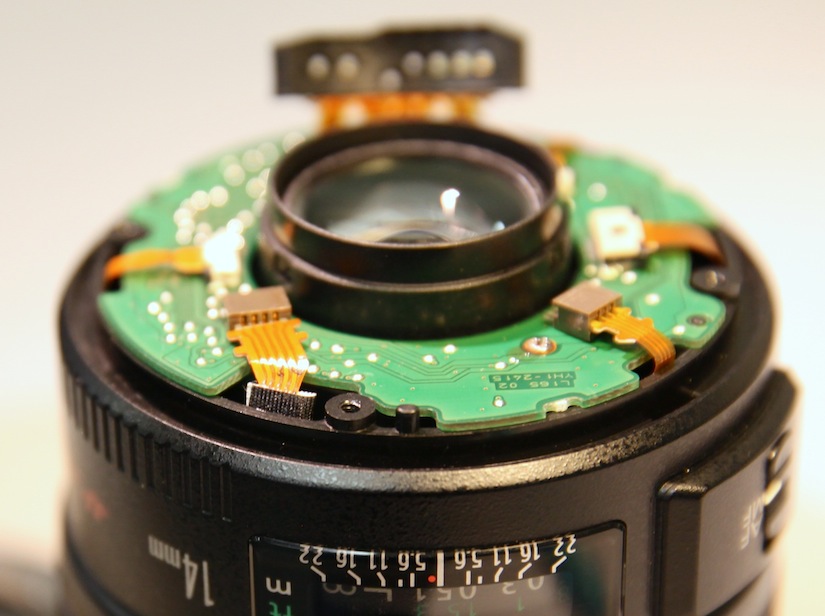 Canon 24-70 f/2.8 L Mk I. A professional lens released in 2002. It weighs about 2 pounds; far larger than any two micro 4/3 lens combined. It is generally referred to as a tank because it never breaks (it has optical problems, but those occur at the front end, which is, oddly enough, entirely made of metal). The plastic mount never breaks despite holding up 2 pounds of lens. Trust me on that, we’ve carried hundreds and hundreds of these for years and never had a mount break. (As an aside, the Mk II version has a metal mount, despite being lighter. I’m not sure why.) 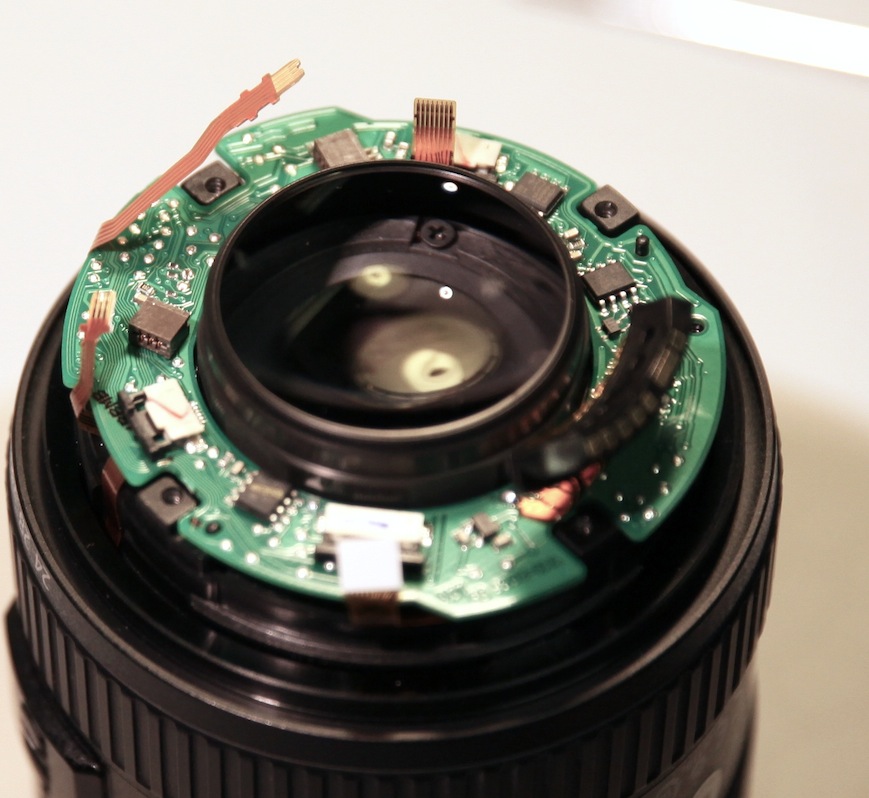 The Tamron 24-70 f/2.8 VC lens. I include this one just for completeness, because it’s another large lens and at least one online authority has stated it has a metal mount. Sorry, there’s no metal back there at all. 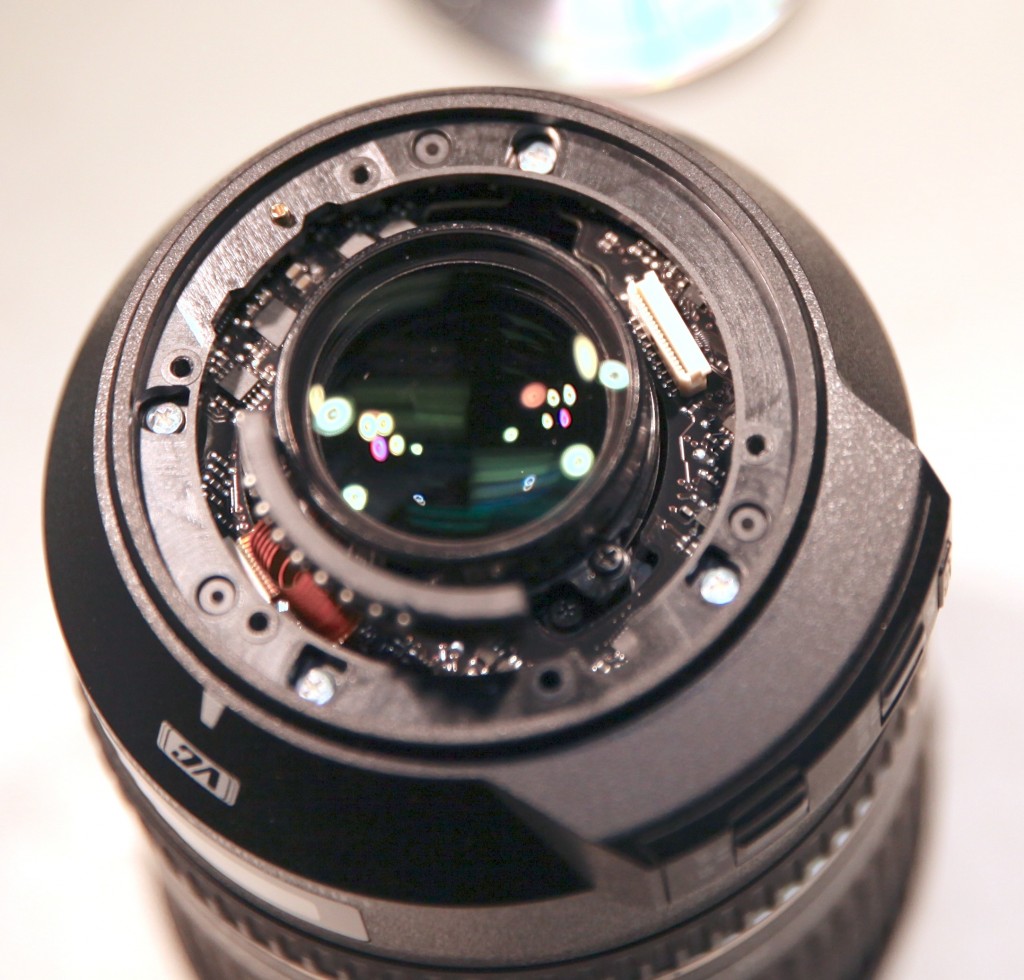 Lens mount with empty plastic holes that attach the bayonet, and screws remaining in holes attaching this to the next barrel piece.

Attention Fanboys: Just because your favorite lens isn’t shown here doesn’t mean it doesn’t have plastic mounts. Lenses of 70-200 f/2.8 size and up all have metal internal mounts (as best I can recall), but lenses smaller than that may be either metal or plastic. All Zeiss ZE and ZF SLR lenses have metal internal mounts (but not Zeiss-designed lenses for other brands). Nikons are more likely to have metal mounts than other brands, but they have a fair amount of plastic-mount lenses, too. Otherwise, the majority of lenses have internal plastic mounts.

Does it make any difference? I looked at the Lensrentals’ reliability data for the last several years (several thousand repairs), and there’s no higher failure rate with plastic mount lenses. They have, if anything, a bit lower failure rate, but it’s not a significant difference.

When a plastic mount does break, people tend to freak out a bit because the lens is so obviously broken. From a repair standpoint, though, we love them. It takes 15 minutes to replace a broken plastic mount and the lens is as good as new. Metal mount lenses don’t break like that. Instead internal components and lens elements get shifted and bent. It can take several hours to return one of those to optical alignment.

Absolutely nothing except that internet hysteria is alive and well. By my latest count, during the last two weeks 7,216 internet experts have claimed it is an absolute fact that plastic internal mounts are a new, cheap, poor quality substitute for internal metal mounts. The pictures above suggest otherwise.

The pictures show that for many years lots of very large, very high-quality, professional-grade lenses have had plastic internal mounts. Guess what? They didn’t all self destruct. In fact several of them are widely considered particularly rugged. Looking at 7 years worth of data involving around 20,000 lenses I can’t find any suggestion that plastic mount lenses, in general, fail more than metal mount lenses. Sure, there are certain lenses that fail more than others, but not because they have a plastic mount.

In theory, plastic mounts might be better, worse, or no different than metal as far as reliability goes. There are logical arguments for each.

Obviously a few Olympus 12-40mm lenses have broken at the mount. It may be there was a batch of badly molded mounts. It may be a design flaw. It may just be random chance – a few of everything break. But it’s not just because the mount is plastic.

As long as we’re on the subject of catchwords, it’s probably worth tackling ‘Weather Sealed’ or ‘Weather Resistant’ next. Many people seem to believe that means ‘waterproof’. When you take lenses apart all day you find out it usually means ‘we put a strip of foam rubber behind the front and rear elements and scotch tape over the access holes under the rubber rings’. 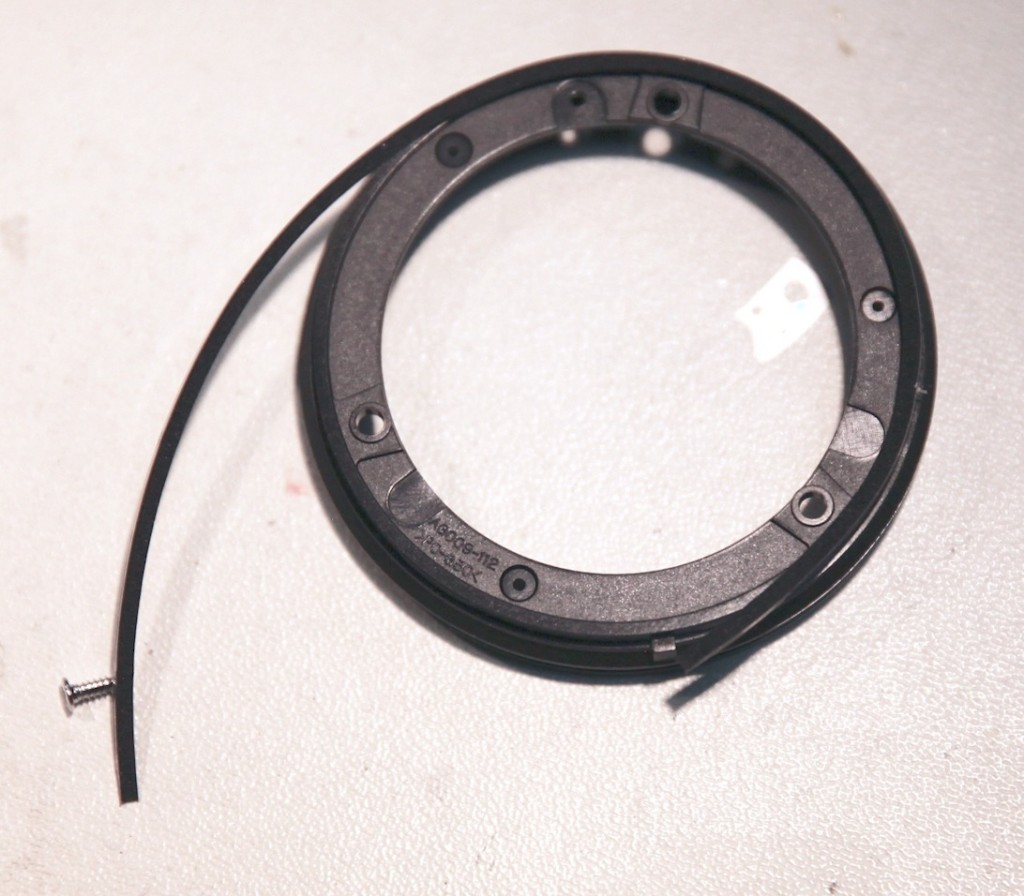 Strip of foamed rubber that sits behind the front element of a ‘weather sealed’ lens. 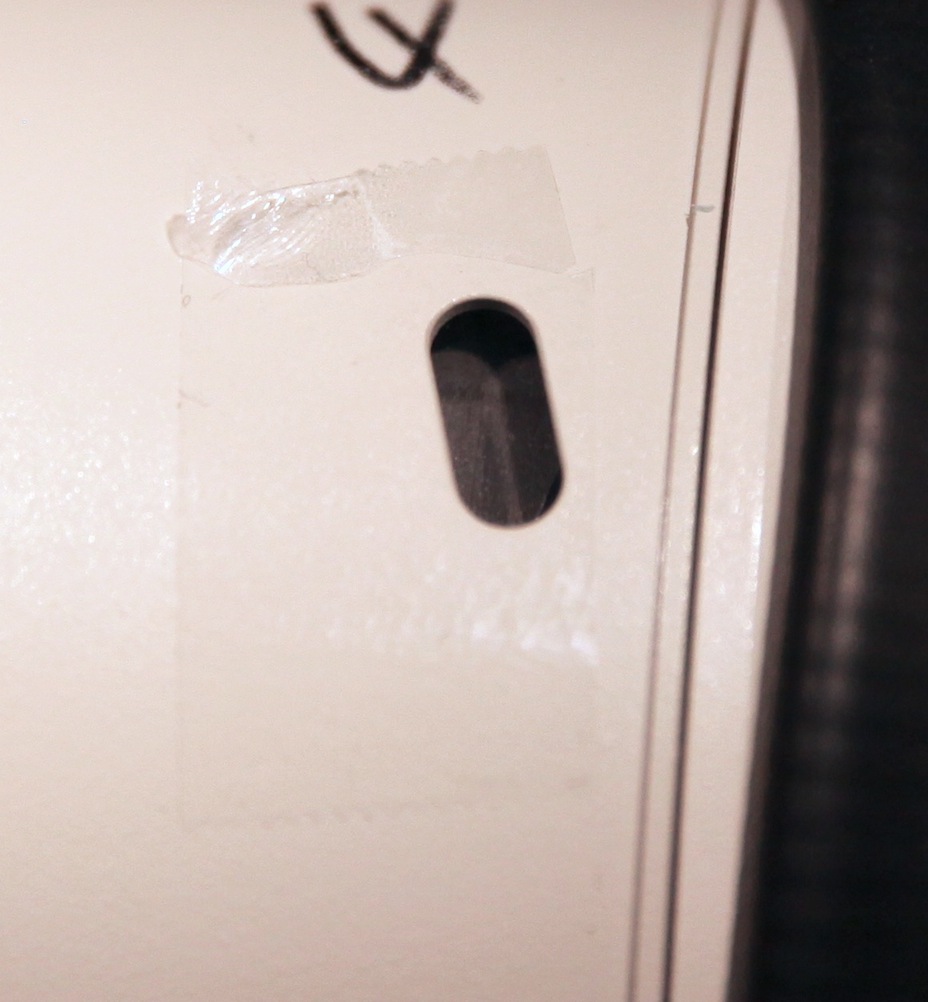 Tape over access holes in a weather sealed lens.

It’s better than no weather sealing, certainly. And some (but not all) ‘weather sealed’ lenses also have internal gaskets around barrel joints and other added bits seals. But I haven’t seen one manufacturer yet tell us exactly what weather their lens is sealed against. Snow? Rain? Sunshine? Wind? Well, it can’t be wind because the lenses we spend the most time taking dust out of are mostly ‘weather sealed’.

It’s very different with different manufacturers. You can assume whatever you like, but when you send your lens in for repair, ‘weather sealed’ still means ‘the warranty doesn’t cover water damage’.

The truth is, terms like Professional Grade and Weather Resistant are nearly as vague as ‘innovative technology’ and ‘stylish design’. I’m certain it’s only a matter of time before I see an online post that says, “I bought this camera because the manufacturer said it had stylish design, but it’s butt-ugly. I think we should start a class-action lawsuit for false advertising”.