The Sky is Falling and the Light is Leaking: the A7r Anti-Massacree

Anti-Massacree – A humorous anti-war movement from the 1960s, suggested in the Arlo Guthrie song Alice’s Restaurant. The song, like many of my posts, was criticized for being overly long.

Believe it or not, I’m mostly a lurker in online forums. I read the hysteria of the day mostly for my own amusement. Sometimes I type a response but I almost always delete it. Interjecting facts into one of the daily hysterical rants would be about as welcome as a cat at a dog show. Usually I don’t even go that far. I just think there’s a lot of people online without much to do and go back to work.

That was my initial response when people started talking about light leaks in Sony A7r cameras. Let me think this through. If you shoot a 30 second exposure at ISO 25,000 into the sun or with a studio strobe aimed at the camera, you get a light leak. I do that . . . let me think . . .  never. And this isn’t my first rodeo. I’ve noticed there are light leaks in lots of cameras if you look for them, and most of them were apparent without jumping through all the hoops it took to produce them on the A7r.

Judging from the various forums, however, at least a million people do that all the time and therefore this presented a huge problem to their style of photography.  The amount of hysteria over leaking sunlight made me think I’d stumbled into the vampire.com forums. I wasn’t getting involved in that for love or money.

But Dave Etchells and the crew at Imaging Resource have shown in a series of articles that there probably are some real-world implications for some photographers. When Dave asked us to take a look and see if we could find causes and workarounds, we did just that.

The light leak has already been documented quite well by Imaging Resource, Ferrell McCollough, and others. We tried a couple of simple methods to determine where the light leak occurred and found something that seemed pretty accurate. We took the fiberoptic light sources from our microscopes and shined them at various points around the camera mount with either lens caps or lenses mounted. 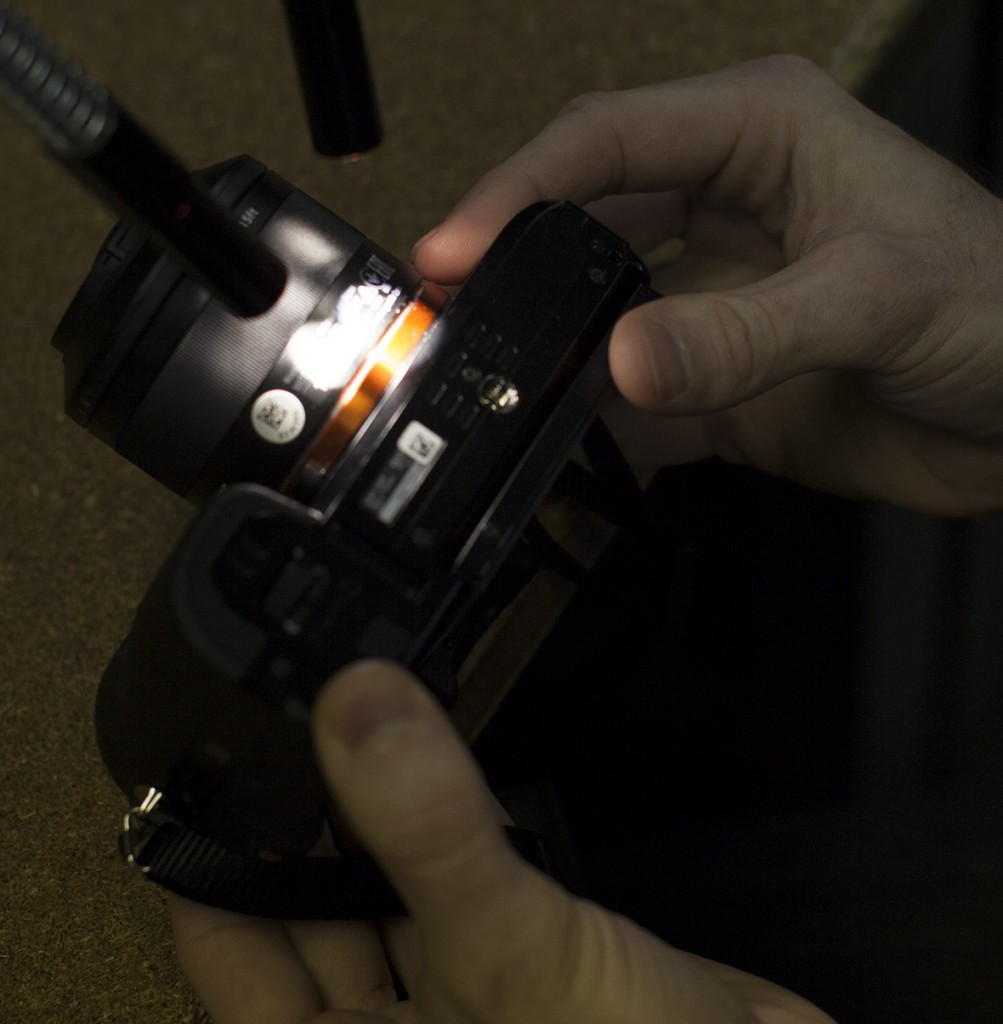 We found at ISO 25,000 and 6 second exposures we could reproduce the leaks quite readily. More importantly, we could see the leaks varied depending upon which quadrant of the mount we shined the light on, with  no leak from certain areas and spectacular leaks from others. 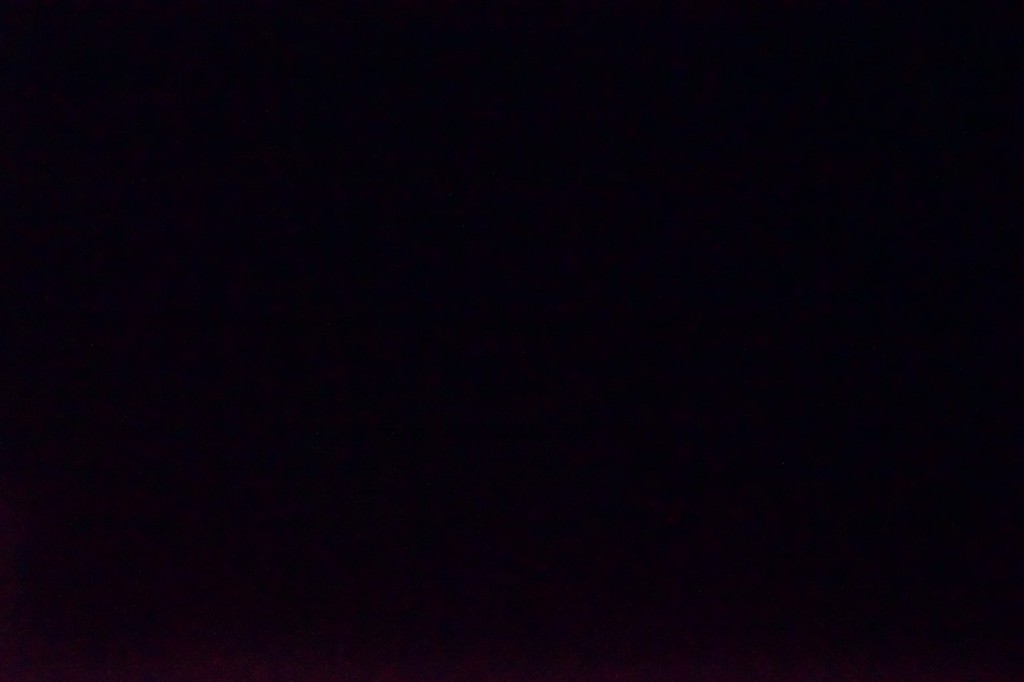 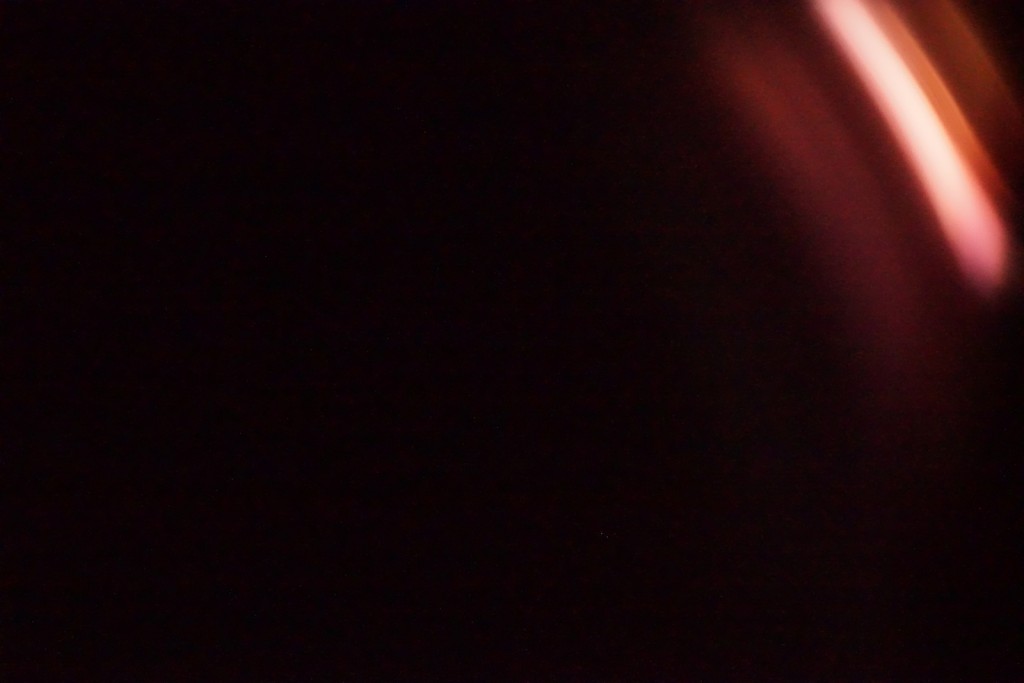 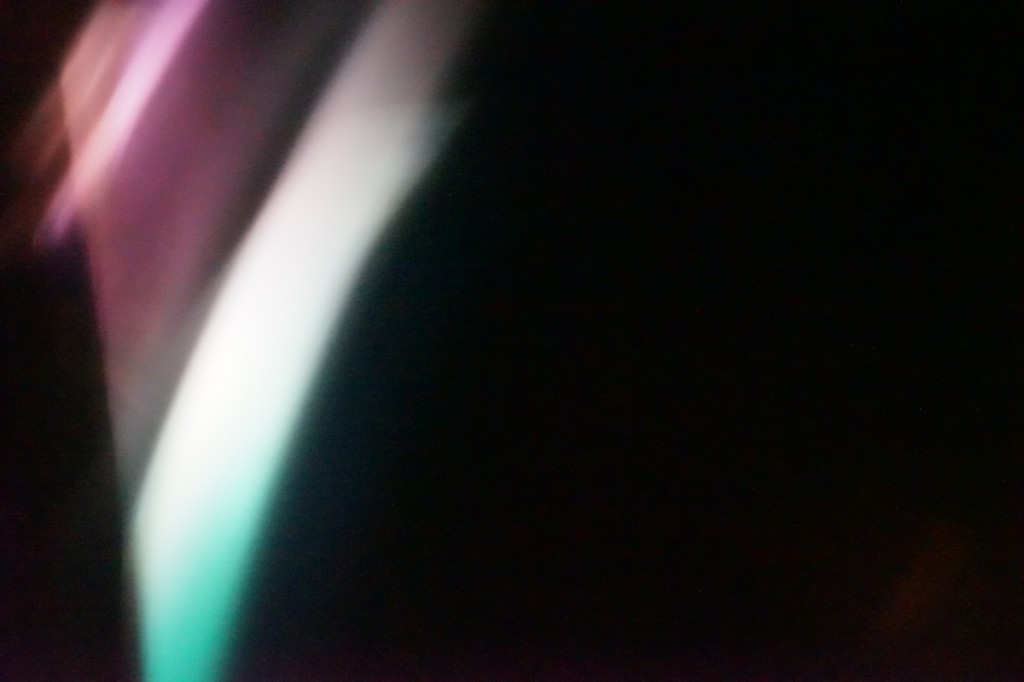 Here’s what we found:

Taking the metal mount off of the lens gives us a bit more information. The red lines show the areas of greatest light leak. Obviously one is around the lens release button. There’s a gap under the mount at the top that may explain why that area has more of a leak. The lower left area doesn’t show any obvious explanation as to why it might be worse, though. 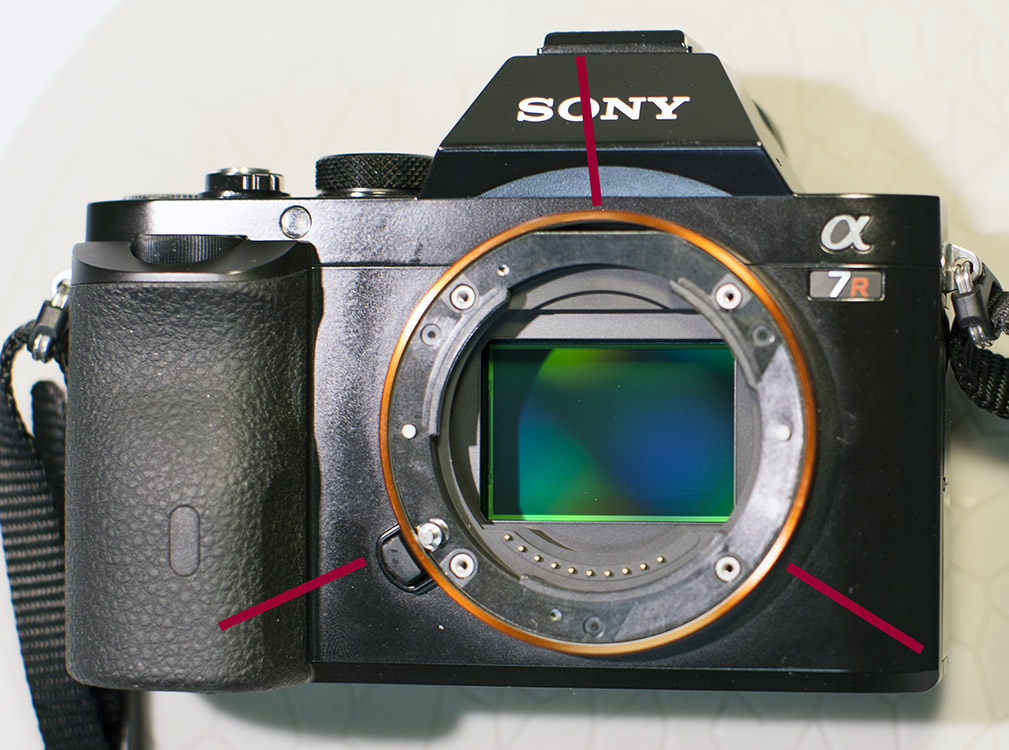 We went back to our test lights and placed the fiberoptic lights over the lens-release button and screened them from the rest of the camera to see if we could actually see the light leak in this area. We were a bit surprised to find there was almost a direct reflection down onto the sensor. This image isn’t the greatest, but you can clearly see the light that was shined onto the button (it’s behind the black mask at the top of the picture) is reflecting back off of the sensor assembly (violet and green bars). 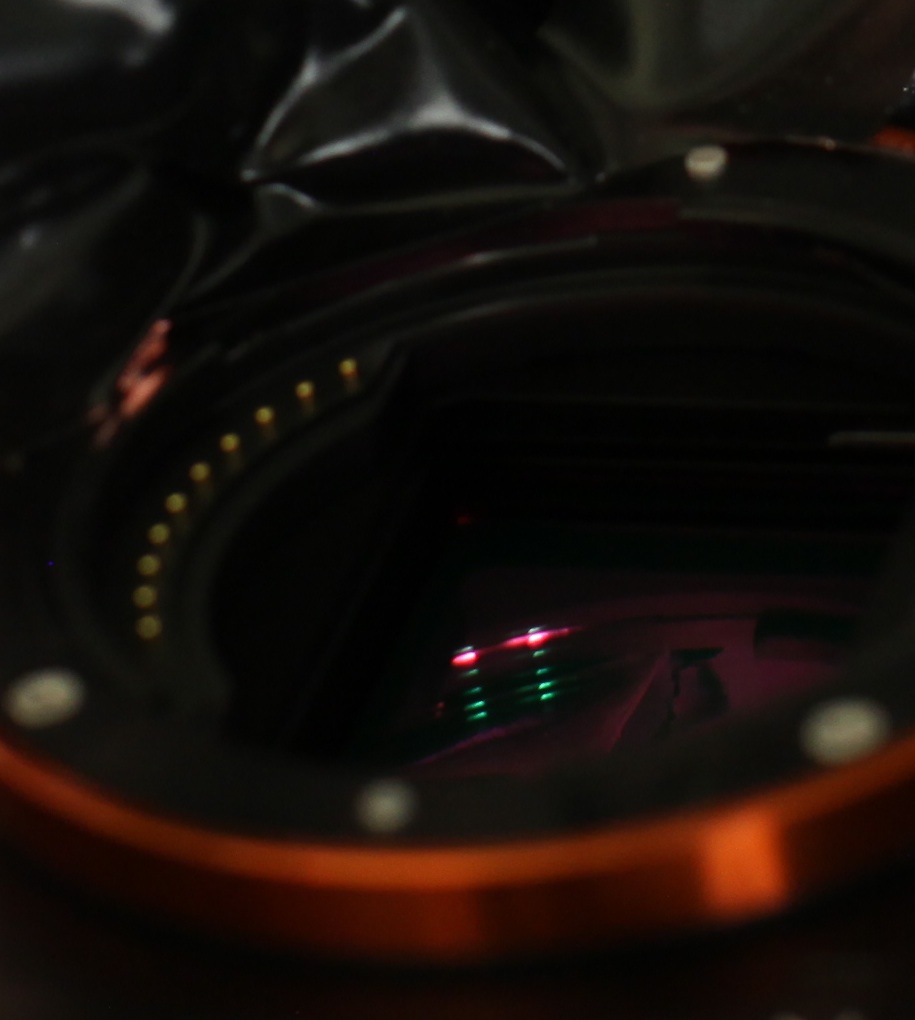 Obviously putting a scrunchy around the lens mount, as Ferrell McCollough has suggested, helps a great deal. My thought, after looking at the front with the mount removed was that putting some optical black on the back of the mount might reduce reflections from the aluminum, so we tried that. Epic fail – it made no difference at all.

We assumed a weather-sealed lens, with a rubber gasket, would work well, too. But we don’t have any weather sealed FE lenses available. So Aaron decided to make a bit of weather sealing around the lens mount, using some single-side adhesive rubber material (electrical tape) we keep in our high-tech lab. A bit of time working under a magnifying loupe with a scalpel and forceps and he had made a nice weather seal. 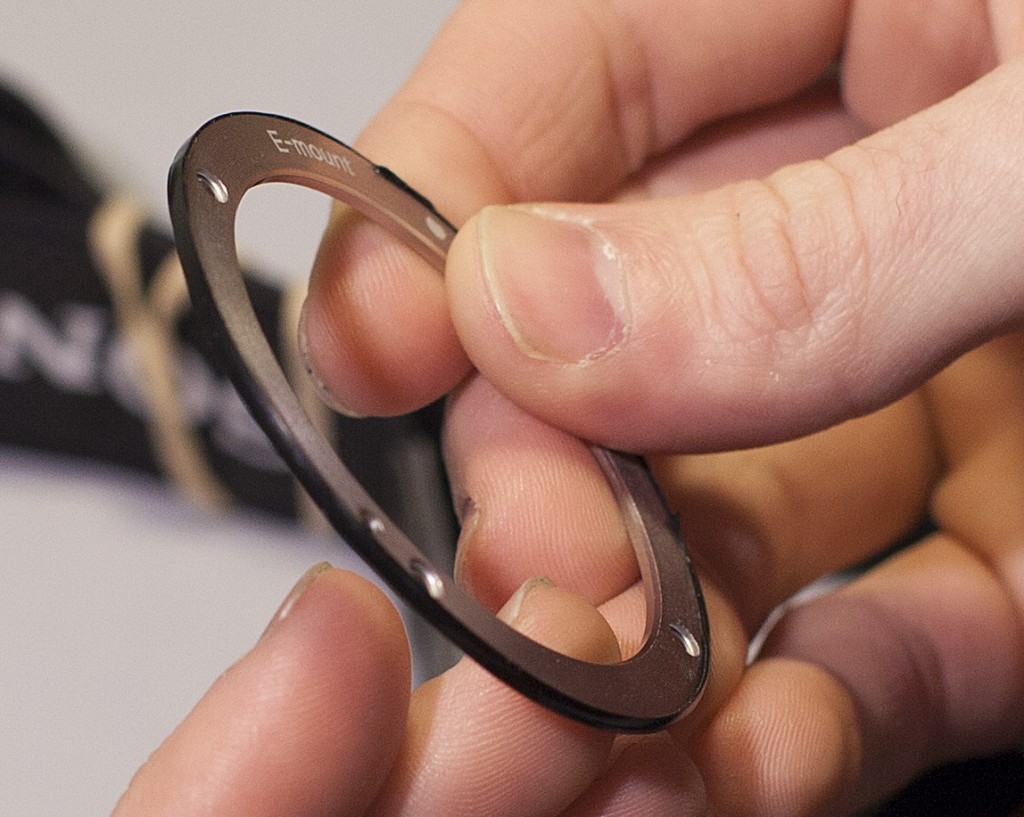 Once it was placed back on the camera, lenses mounted nicely and the light leak from the top and left sides was almost totally gone. It didn’t do doodly squat about the light leak around the lens-release button, as we expected.

Here we were faced with a conundrum. We could completely disassemble the camera to get to the lens release mechanism and hope some obvious solution became apparent (this was Aaron’s initial vote). But about this time Officer Obie wandered into the repair area and made some ‘suggestions’ about us actually fixing some stuff that was awaiting repair. We told him, in two-part harmony, that we had been tasked with a Holy Quest and explained the ISO 25,000, shooting into the sun, 30-second exposures, fiberoptic light testing, and the special rubber lens-mount weather seal we’d made. He just said, “Kids, get back to work.” 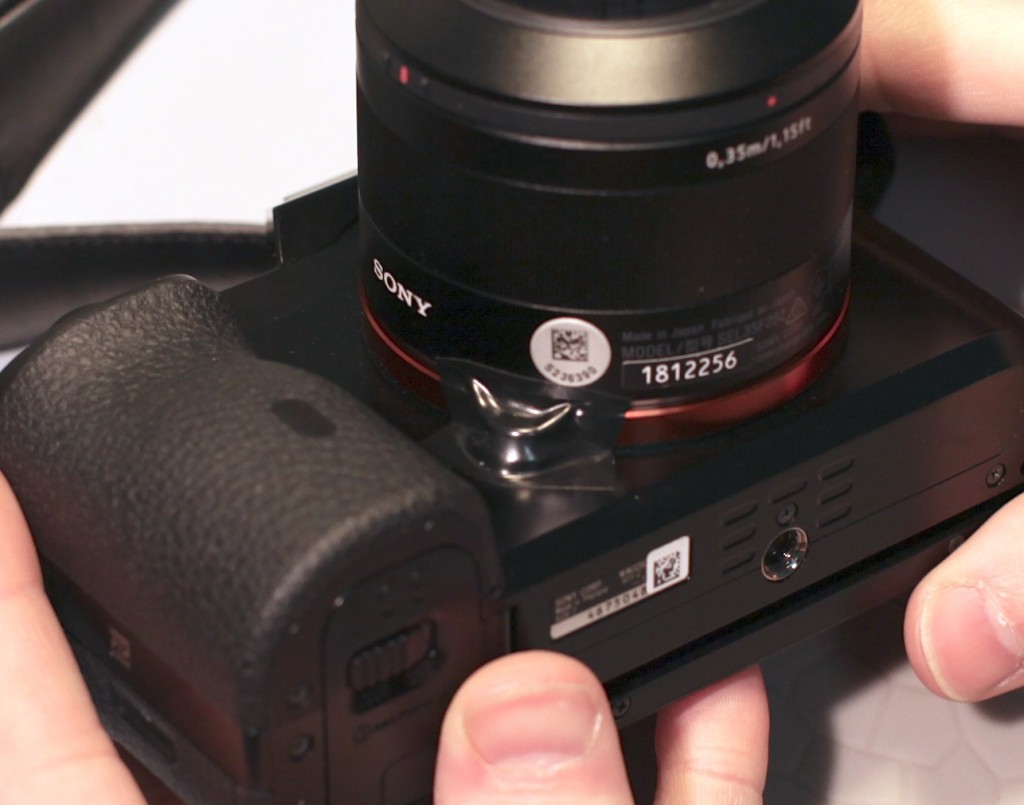 I wouldn’t call it elegant, but it worked just fine. There were absolutely no light leaks now and once we trimmed the tape back off of the lens, the release button worked fine through the tape.

Practically speaking, I don’t recommend making your own weather seal around the lens mount. It takes a while and you have to take off the front mounting plate so your warranty is voided, etc. A scrunchy or such will work just fine for those times when you just have to shoot at ISO 25,000 for 30 seconds, take long exposures facing the sun, etc. If the thing you use doesn’t cover the lens-release button, then a bit of electrical tape will handle that just fine, too.

And for you Fanboys who just can’t wait to Sony bash over this odd little issue, let he whose camera is without light leak cast the first stone. Because, so far the same problem has been found with Canon, Nikon, and Fuji cameras. I assume a similar solution will work just fine for those, too.

Roger Cicala and Aaron Closz, the boys from the Group W bench

Meaningless Aside:  Guthrie’s suggestion was that draftees, during the psychiatric evaluation part of induction, simply walk in, say, “You can get anything you want, at Alice’s Restaurant,” and walk out. I view a lot of forum threads the way he viewed the draft evaluation. If you’ve never heard “Alice’s Restaurant Massacree” and have 18 minutes to spare, it’s pretty funny even today.

Tweet
Posted in Equipment
A 24-105 Comparison
The Heights and Depths of Nadar: TL;DR Version