Only You Can Prevent Movi Fires

When you run a rental house, you basically function as a torture-test lab for equipment. For many years I’ve put out a Repair Data list annually, showing which photography equipment is more likely to fail than others. I get asked to do the same thing for video equipment, but I usually just shrug and say it’s not necessary. I can sum it up simply.

If the product is new and exciting it will probably fail.

If the company is new and cutting-edge, the product will probably fail.

I’m sure some of you are thinking I’m just being overly harsh about cutting-edge products from new, cutting-edge companies. Really, I’m not. I’m just using common sense. Think about it. Some guys come up with an idea for something great and unique. They might convince an investor to back them, or maybe crowd-source some funding. They put together a prototype, find a parts suppliers, and assemble maybe 5,000 of that item. They might even budget to get Famous Cinematographer Guy to use it and blog about it.

You know what they don’t budget for, because it’s really expensive? An engineering firm to do failure testing and find out where the electronic and mechanical weak points are. So they release the product, it starts breaking, and guess what? They spent all their money to make 5,000 new widgets. They don’t have any spare parts for repairs. For that matter, they probably don’t have a repair department.

The truth is, I totally understand it. I meet a lot of young entrepreneurs who are trying to bring exciting new products to market. They truly mean well, and they truly believe in their product. They’re desperately trying to get their new product to market. That’s such a huge task that it’s hard to worry about customer support until later.

We generally don’t make a big fuss about this kind of thing. If you hang out on Lensrentals.com you might see some exciting new products disappear after a few months. That’s what happens when we realize there’s no way to keep a product operating long enough for most renters to use it.

More commonly, you might find a product you rent has been modified a bit. We do this when we think a product has great potential except for the fact it breaks frequently. Since we’ve got a repair department full of gear-heads who like trying to solve these kinds of problems, that seems the logical way to go.

The Edelkrone Sliders are a good case in point. It’s a brilliant concept, a smoothly moving slider that extends as it slides, so a 17-inch slider slides a full 24 inches. Unfortunately, the cheap belts sent out with the first ones had a problem: they permanently bent in the ‘rest’ position, so when you slid you got a big bump every time the belt passed the bend.

We replaced the belt with some top-of-the-line automotive timing belts and it worked better. Edelkrone replaced it with some soft nylon cord. That worked well, too, except that it the soft cord broke frequently. We’ve been pleased to see they finally have started using the same belts we’ve been using for months (we do like to be right). We’ve also replaced the feet that have little stuck-on rubber pads that come off, and tried several fixes for the plastic bearings that fall out and get lost when the belt breaks or comes loose. It’s a great concept, but we’ll probably wave the white flag and discontinue it soon.

Red Rock’s One Man Crew is a similar, if more complex, product. Amazingly good idea, but it’s hard to keep in service. But it’s so cool we’ve tried. We’ve glued foam inside to reduce the rattling. Aaron even tried replacing the soft plastic gear teeth that wear out in amazingly short time with wooden ones (epic fail) and metal ones. We love it. We hate it. We’ll keep trying fixes for a while to see if we can get it reliable enough to keep renting.

Now don’t get me wrong. You should certainly have fewer problems than we do. For one thing, you’ve probably spent some time reading the instructions before you started using your expensive new purchase. Renters don’t do that, probably exceed weight restrictions, and do lots of other things you wouldn’t do with your own equipment. So just because something has problems under harsh rental conditions doesn’t mean it will have problems when you baby it. But remember, too, that most of the equipment we carry, used under those same harsh conditions, hardly ever fails.

Once in a great while, though, we come across something that’s actually dangerous and feel like we need to tell you about it – both for your possible protection and to explain why something you rent from us looks rather odd.

The Freefly Movi is in that category, unfortunately. The product is so great that we did a workaround that should keep it safe. It’s not pretty or professional, but until we come up with something better it will have to do. If you own one, I’d recommend you do something similar, unless you’re one of those people who actually follow directions meticulously and always makes sure anyone who uses your equipment does too.

The battery system for the Movi is a LiPo system that, like the Movi controller, is borrowed from the Radio Controlled Model industry. There’s nothing wrong with that. Unfortunately, though, the charging cords are a fairly narrow gauge, and more importantly, the ends of the charging cable are free to touch each other when the cable isn’t plugged into the charger. Since the battery cable connector can be a bit difficult to release, a lot of people leave this cable connected to the battery. 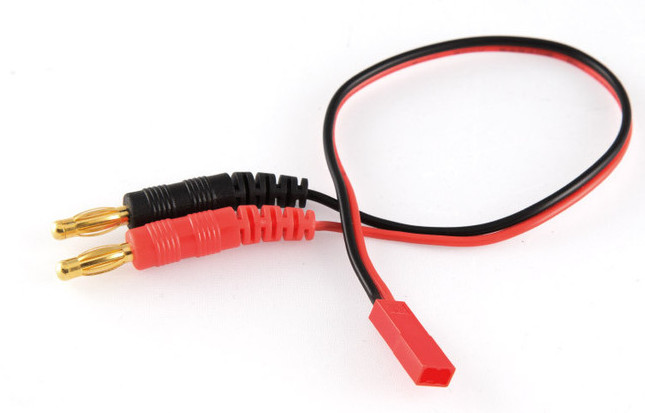 Freely Movi charging cables. As the website shows, you shouldn’t leave these cables plugged into the battery and then let the copper tips touch. Image http://store.freeflysystems.com/products/replacement-leads-for-movi-battery-charger

Now I’m not an electrical engineer, but even I know when you let the positive and negative terminals of a powerful battery come in contact with each other the battery discharges fast. Which gets hot. How hot? Start a fire hot. We’ve had 3 fires now, all started when a renter left the charging cables plugged into the battery, but not into the charger, so that the copper tips of the charging cable could touch each other. Like this.

Like Murphy’s No Smoking Rule says: No electronic component will work properly unless all of the smoke is kept therein. 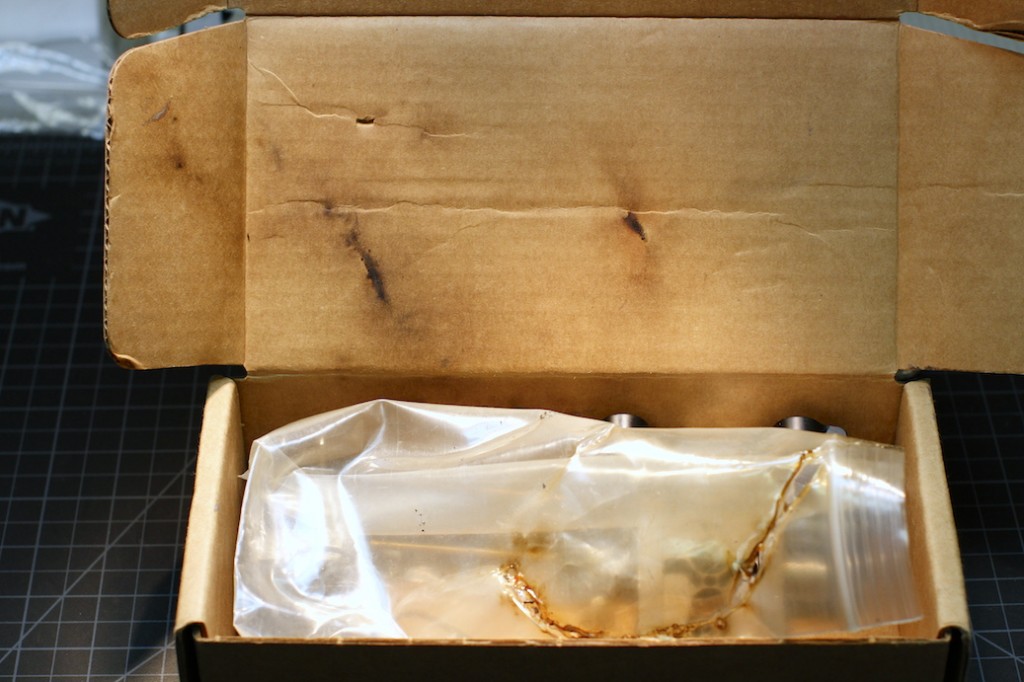 This isn’t particularly Freefly’s fault. They clearly tell everyone to be careful, to not leave the battery plugged in to the cable unless the cable is inserted in the charger, etc. Plus, we sort of assume everyone knows that basic rule of electricity and ghostbusting: Don’t cross the streams.

But in the rental world, at least, a lot of people are no more likely to read the directions than I am. Third-assistant grips hired for the day don’t ever read directions, for example, and they’re usually the ones packing up the equipment.

Our fix isn’t elegant, but it should be effective. We just mold a plastic piece out of Sugru that keeps the terminals from touching whether they’re plugged into the charger or not. We’ll eventually find a supplier with a nice, thick-cabled, fixed-plug JST charge lead and replace our homemade fixes with that. But for now, if you notice a homemade plug on the battery charger, you know why.

If you have a Freefly Movi and you’re a careful person, you’re probably fine. But if anyone else uses it that doesn’t know better, we strongly suggest take a few minutes to make a similar solution. You don’t want to be the guy whose luggage starts burning halfway through the flight. If you don’t like Sugru, you can get a fixed space banana clip plug but make certain you clearly mark positive and negative terminals or other bad things might happen. 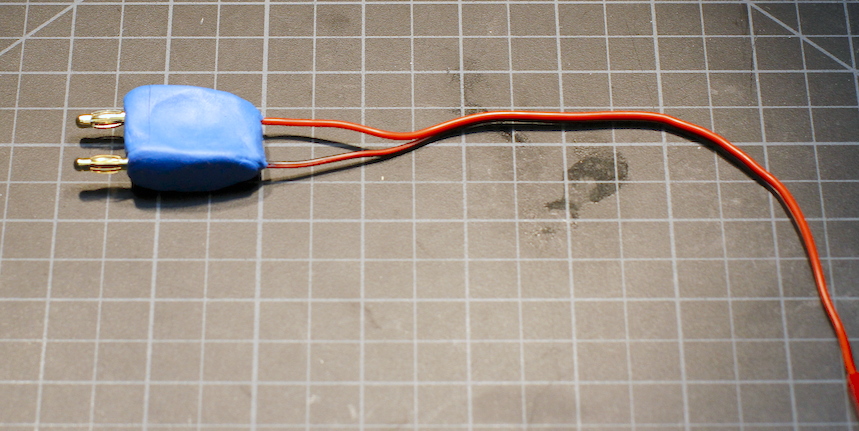 OK, the blue color is kind of a fail, but you get the idea.

I’m not just slamming the manufacturer, here, I’m slamming myself, too. Like every other product that we rent, I examined it when we first began stocking it, looking for weak points so I could go ahead and order repair parts, etc. I never thought of this problem until after it happened. Actually, the first time it happened we assumed there must have been some kind of short in the battery. Only after the second fire did we realize what the actual issue was, and there was a third before we put some corrective measures in place.

We all need to remember just how powerful today’s batteries are. Discharge all that power too fast and bad things happen. Making a direct connection between the positive and negative poles of a powerful battery is like pulling the pin on a grenade. Like the military saying goes, “Once the pin is pulled, Mr. Grenade is not our friend.”

The military have another saying I like: “Remember, every part was made by the lowest bidder.” When you buy that new, exciting, cutting-edge piece of equipment, that’s completely true.