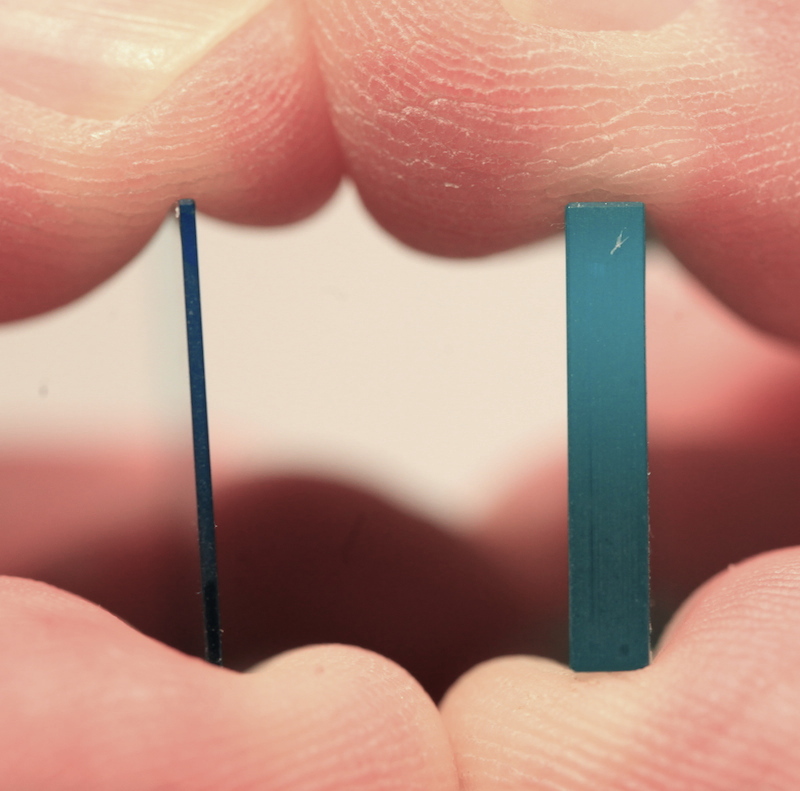 NOTE: This is a Geek Post. If you aren’t into geeky photo measurements, or into adapting lenses from one brand of camera to another, you’ll not be interested.

A year or two ago, I wrote a blog post where I basically showed lenses shot on adapters on other cameras aren’t acceptable for testing. If you run them through Imatest the results aren’t accurate. I suggested that reviewers shouldn’t test lenses on adapters, although obviously adapters are a great way to use interesting lenses to take pictures.

More recently, in online discussions about why certain lenses weren’t working well on certain cameras, I brought up the fact that sensor stacks, the various layers of glass in front of the sensor containing AA filters, IR filters, etc. would be contributing to this problem; that there was more to it than just adapter irregularities. Most people thought that really wasn’t having an effect, though, so I forgot about it.

Yesterday I got a dramatic rude awakening that made me return to this train of thought and do some investigation. The way it happened was simple enough. Dr. Brian Caldwell, the guy who designed the Coastal Optics 60mm Macro, the Metabones Speedboosters focal reducers, and a lot of other cool lenses came to visit.  I’ve had the pleasure of knowing Brian for some time, but I will have to admit his visits (like those of several others) have become just a bit more frequent since we got our MTF bench up and running.

Brian had brought a prototype of his latest focal reducer. He told me it was so good that it clearly improved the MTF of full-frame lenses while increasing their aperture when mounting them to m4/3 cameras. He also brought the computer generated MTF graphs showing what it should do, which was pretty spectacular. 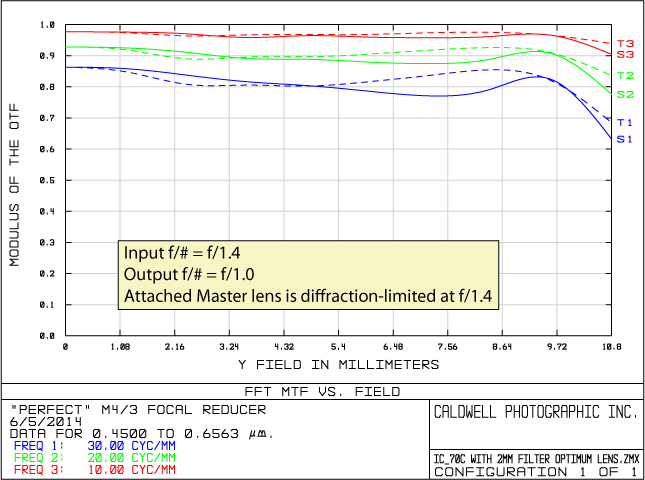 Theoretic curves of the prototype “Perfect” focal reducer, showing what the MTF of a diffraction limited f/1.4 lens would look like reduced to f/1.0. Courtesy Dr. Brian Caldwell

Well, we really couldn’t wait to play around with that, so we all gathered by the cheerful glow of the Imagemaster MTF bench and mounted a Zeiss Otus 55mm f/1.4 on it for a test run. As expected, the Otus generated very nice MTF curves.

Then we mounted the focal reducer on the Otus, adjusted the MTF bench for the narrower depth of field and greater aperture, and tested the combination. The results were absolutely awful. We rechecked all our settings and ran it again. Awful. We tweaked some settings. Awful. Here’s an example, of the same side of the same lens with and without the focal reducer straight out of the MTF bench. (I’ve flipped the MTF chart of the lens-with-reducer to make it easy to compare, which is why the numbers are backwards.) We repeated this with several lenses and it’s about the same every time.

Comparison of MTF curves of a single Zeiss Otus 55mm f/1.4 alone (left) and with the ‘Perfect’ focal reducer (right). You don’t need to understand MTF curves to conclude the right side is worse. I know the difference is amazing, but we repeated it with several copies. All were similarly bad.

The room became really quiet. Then Brian jumped up and said, “Filter stack – the machine doesn’t have a filter stack.” What he meant was that every digital camera has several pieces of glass in front of the sensor. The light leaving the rear of the lens has to pass through this glass before arriving at the sensor. Brian’s design (like that of most lenses) has an optical formula that plans on light rays leaving the lens passing through such a stack before reaching the sensor. Since this adapter is designed for micro 4/3 systems, which have a thick optically stack, the fact that there was no glass in the light path of the optical bench might be causing a problem.

So we found a couple of 2mm pieces of optical glass, mounted them between the lens rear element and the MTF sensor, and ran the tests again. Suddenly the Otus-focal reducer combination was amazingly good. As Brian had promised and predicted, it was a bit better at f/1.0 than the Otus was at f/1.4 (over a smaller angle of view, of course).

OK, But What About Regular Lenses?

The MTF results with Brian’s Perfect focal reducer were ridiculously dramatic, and to be honest I didn’t believe the glass could make that much difference. Brian often speaks to me in English because it’s a common language we both understand. But when he gets excited he lapses into his native Theoretical Optical Physics, which I can barely follow.

Luckily, he had brought along his colleague Wilfried Bittner, who speaks both Theoretical Optical Physics and English (although his native language is German). With Wilfried’s aid as translator, I’m pretty sure I understand that at effective apertures under f/1.4, glass in the optical pathway have a huge effect on spherical aberrations, which are apparent even in the center of the lens’ field. So the fact that we were testing what was, in effect, and f/1.0 lens made the results very dramatic.

The MTF is better now higher in the center, but there is more astigmatism off-axis. (I was surprised at the on-axis effect, but Brian tells me that the amount of glass in the path creates on-axis spherical aberration that could affect center MTF on wide-aperture lenses. At least that’s what I think he said. Any errors of interpretation are mine.)

But then we realized this is a Canon lens, not an m4/3 lens. Canon cameras, as best we know, have about a 2mm filter stack. So we reduced the glass in the path to 2mm and ran the test again.

The 2mm result does seem a bit better over all, compared to the 4mm. The graph below compares the 2mm and 4mm results to hopefully make them easier to compare.

We repeated this for a couple of other Canon wide aperture lenses and found similar results. The MTF bench results are better when there is a 2mm piece of optical glass in the path between the rear of the lens and the bench’s sensor.

So This Should Work the Other Way, Right?

OK, so if micro 4/3 lenses are expected to have a thick sensor stack and m4/3 lenses have to be designed for them seem much better with a thick piece of optical glass in front of the sensor. Canon lenses supposedly have a medium-thickness sensor stack, and lenses designed for them seem best when we put a thinner piece of glass in their optical path.

What about lenses designed for little or no sensor stack? Actually, it’s already been shown they don’t do well on camera with significant sensor stacks. Panavision has made premium lenses for their film cameras for many years. Recently they’ve released their Primo V series of lenses, which are their Primo lenses modified, according to their website to ” eliminate coma, astigmatism, and other aberrations caused by the extra layers of glass in digital cameras.” U. S. Patent application 14/024,578 describes adding additional optics to the existing lenses to correct for the glass in the imaging pathway, that is between the rear of the lens and the camera sensor.

But we like to see for ourselves, so we grabbed a Leica  35mm ASPH Summicron and tried the same tests. Leica is known to use much thinner filter stacks (1mm or so) than the other camera manufacturers. So putting optical glass in the imaging pathway of an older Leica lens should make it worse.

The Leica 35mm ASPH had an odd reversal of astigmatism with sagittal lines improving a bit, but tangential lines getting much worse. Overall I’d say it wasn’t better or worse, just different.  With 4mm of glass in the optical pathway, though, the Leica clearly gets worse. I would have liked to repeat the test with 1mm of optical glass in the pathway, but we didn’t have any 1mm optical flats.

The things I’ve brought up today aren’t unknown, although they aren’t widely talked about. Bruno Massett had an excellent discussion about the theoretical implications almost a year ago in Mike Johnston’s The Online Photographer. Lens designers plan for the thickness of the sensor stack, and others have made corrective lenses to allow very expensive lenses developed for film to be used on digital cinema cameras.

Obviously this isn’t an exhaustive test using a large series of different lenses. The main purpose of this post is to serve as a demonstration of just how much of an effect the sensor stack has. I figured if I was surprised, then some of you would be, too.

In order to start making some generalizations, a good database of sensor thickness needs to be made public. I’ve only been able to find references to a few. We know Leica is thinnest and I was told micro 4/3 was the thickest at 4mm. I didn’t believe that, so we took a GX1 apart. As you can see from the first picture, it is, indeed very thick and I can confirm it’s a bit over 4mm.

The extra good news is we now have a micro 4/3 camera with absolutely no glass in front of the sensor at all and a really nice piece of 3mm thick cyan glass for a conversation piece. The camera no longer focuses to infinity, of course, but it takes nice pictures in UV/IR/Visible light spectrum, at least up close. (I know what you’re thinking: but no, we didn’t start this article just so we could make a glass-free GX1.) 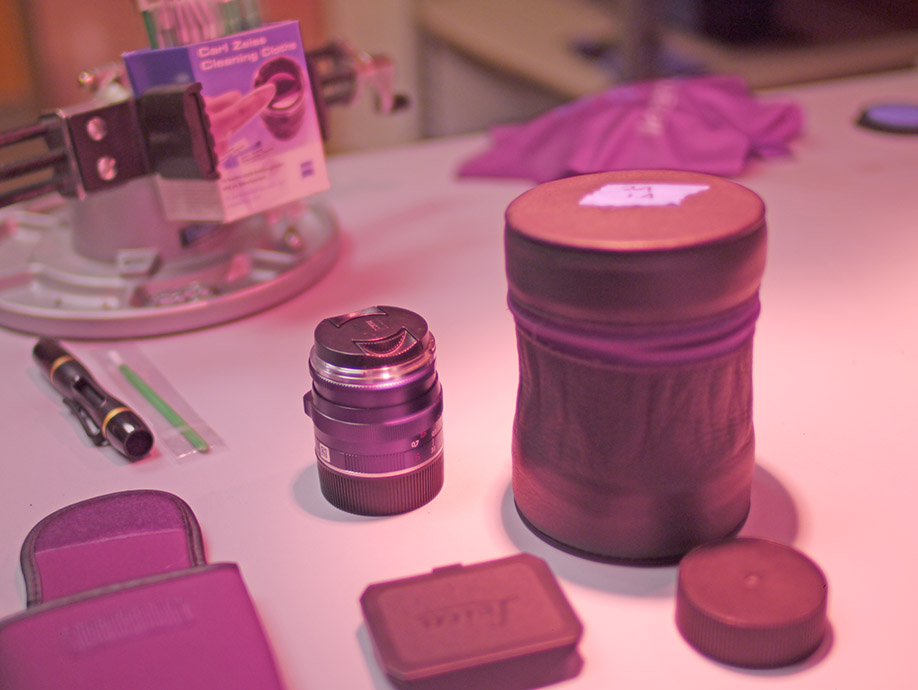 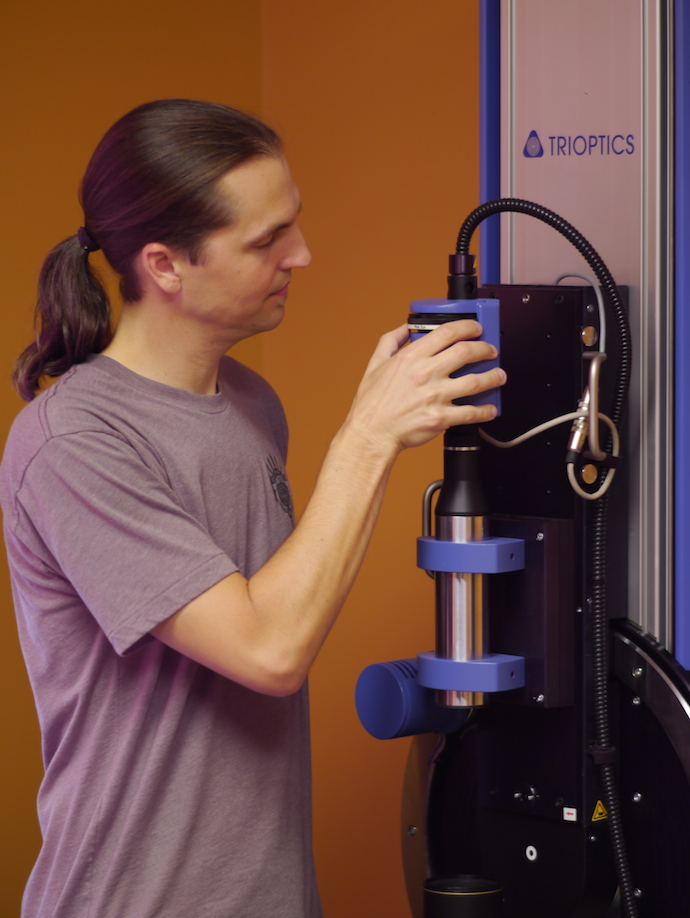 Under fluorescents the images almost look like those from a normal camera. Image capture and camera creation credit: Aaron Closz. And no, Darryl doesn’t get to use the new machine. When he works really hard, though, we let him touch it.

I hope to have at least a moderately complete database of sensor thicknesses done and published by early next week. We’re doing some disassembly here to measure sensor glass and have sent some cameras off so the glass can be measured optically. Optical thickness may be somewhat different from measured thickness since different types of glass might be used.  (If you have some knowledge in this area, I’d appreciate an email or comment post. You might save a camera.)

We may need to make corrections on our optical bench when testing lenses designed to have a certain thickness of glass between their rear element and the sensor. Obviously, we’ll be going back to doing more testing there, too. I suspect, for example, that the numbers I posted in last week’s 50mm article might actually be a tiny bit lower than reality for the Sigma Art and Zeiss Otus lenses.

Or perhaps not. This is a new area and we’ll have to run lots of copies on the bench, and correlate them with Imatest or other complete-systems measurements before we know for sure.

Roger Cicala and Aaron Closz, with the assistance of Brian Caldwell and Wilfried Bittner

Tweet
Posted in Lenses and Optics
I’m Gonna Party Like It’s 1995
Sensor Stack Thickness: When Does It Matter?