Of Course We Took One Apart

This is a Geek Article. Many of you don’t understand the term ‘Geek’ properly, so perhaps this will help. As the graph shows, if you aren’t both intelligent and obsessed with photo gear, you won’t enjoy this article. 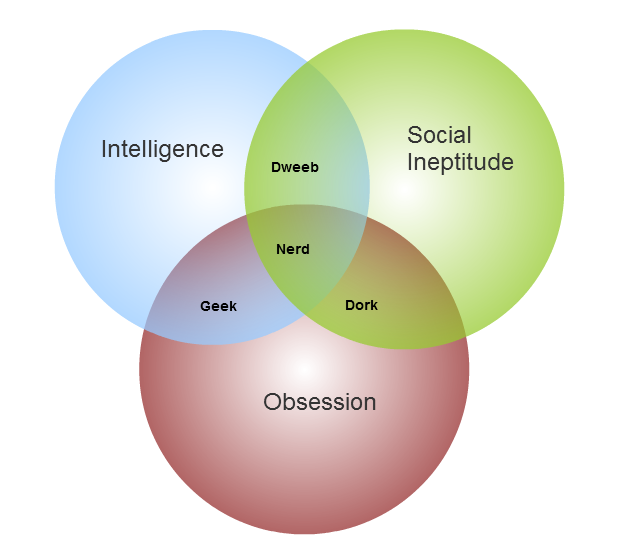 I’ve tried hard to find whom to credit for this, but haven’t been able to. If you know, please let me know so I can credit this brilliant work.

We spent most of the last three weeks doing comparison tests with Canon’s new 16-35 f/4 IS. We came away from that comfortable that this is the best wide-angle zoom Canon has ever made. But our day job is fixing broken lenses. I may have mentioned once or maybe three hundred times that trying to keep the 16-35 f/2.8 Mk II lens optically adjusted sucks up our time like a black hole sucks up interstellar dust.

The whole time Aaron and I were testing the new lens, what we really wanted to know was if it was built differently and if adjustments would be either simpler to perform or easier to accomplish, or maybe even both. We weren’t sure, though. According to Canon’s White Paper, the new lens has some new technology.  The one that made us a little queasy was “newly developed four-group zoom arrangement.” When you work on lenses, there are key words you hate. Chief among these is “newly developed,” which we usually translate as “nearly developed.”

On the other hand, the White Paper also said the redesign involved “matching the design of the EF24-70mm f/4L IS USM, for greater zoom durability and to provide the barrel components with better vibration and shock resistance.” That’s been a reliable and sturdy lens, so we did have some glimmers of hope.

The Canon White Paper includes a diagram of how the various components move, though, and that made us take notice. Every damn thing inside that lens moves with either zooming or focusing, or both.

From Canon White Paper showing the motion of various elements. Even the aperture is moving.

Let’s Take Out Some Screws

Those of you working on your lens disassembly merit badges can take out your JIS #00 screwdriver and follow along from home.

Assuming the disassembly position, we take out the 4 bayonet mount screws and the 2 electrical connector screws. 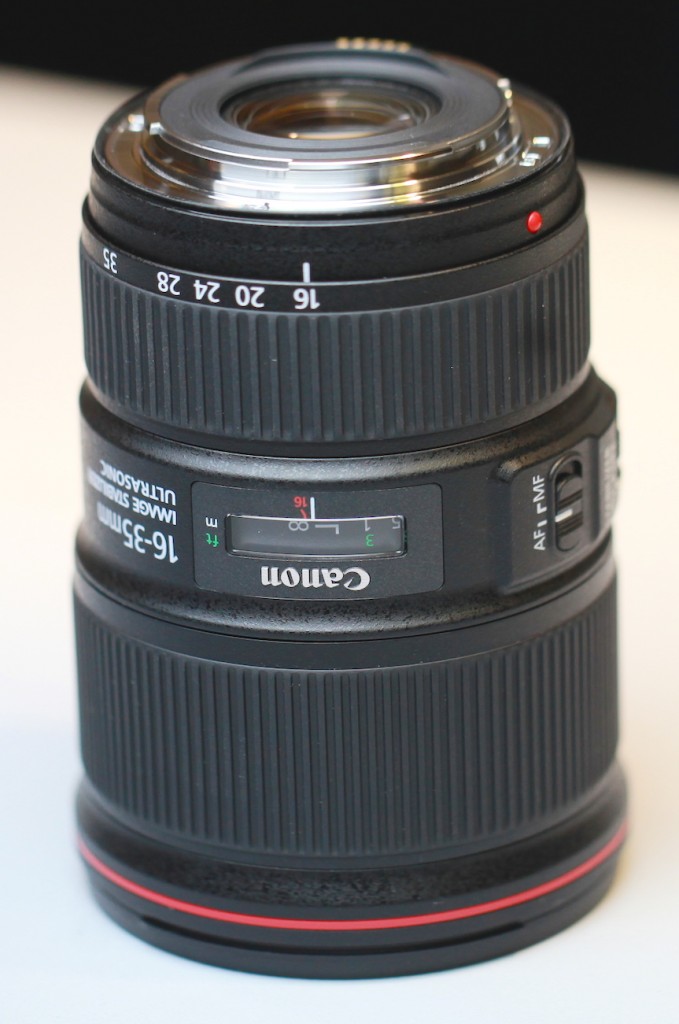 Here’s the first mildly pleasant surprise. I’m no big fan of “weather resistance” because it’s 80% marketing hype and 20% reality. But the rear bayonet came off only with a bit of a tug, because it has a really thick, soft rubber water weal between it and the rear barrel (red line). 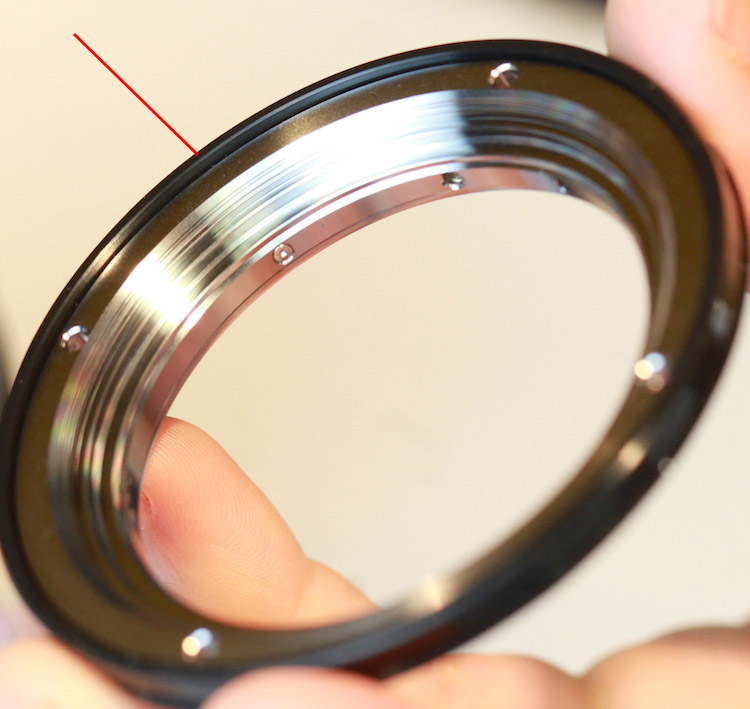 Keeping on with the weather resistant theme, the rear barrel cover, which comes off next, has a nice, deep seal with a rubber gasket (red line) where it mounts into the main barrel. (As an aside, the 16-35 f/4 IS requires a front filter for weather sealing; the front group moves and is not sealed.) 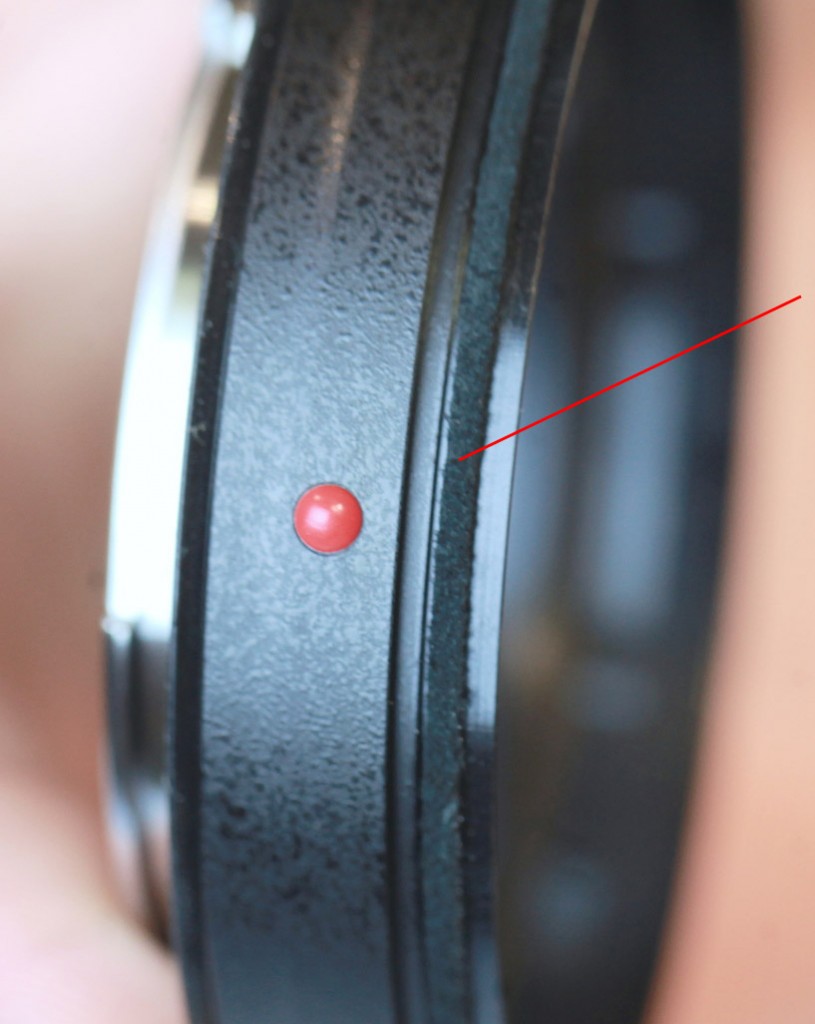 With those parts off, the PCB is exposed and ready to have its flexes disconnected. 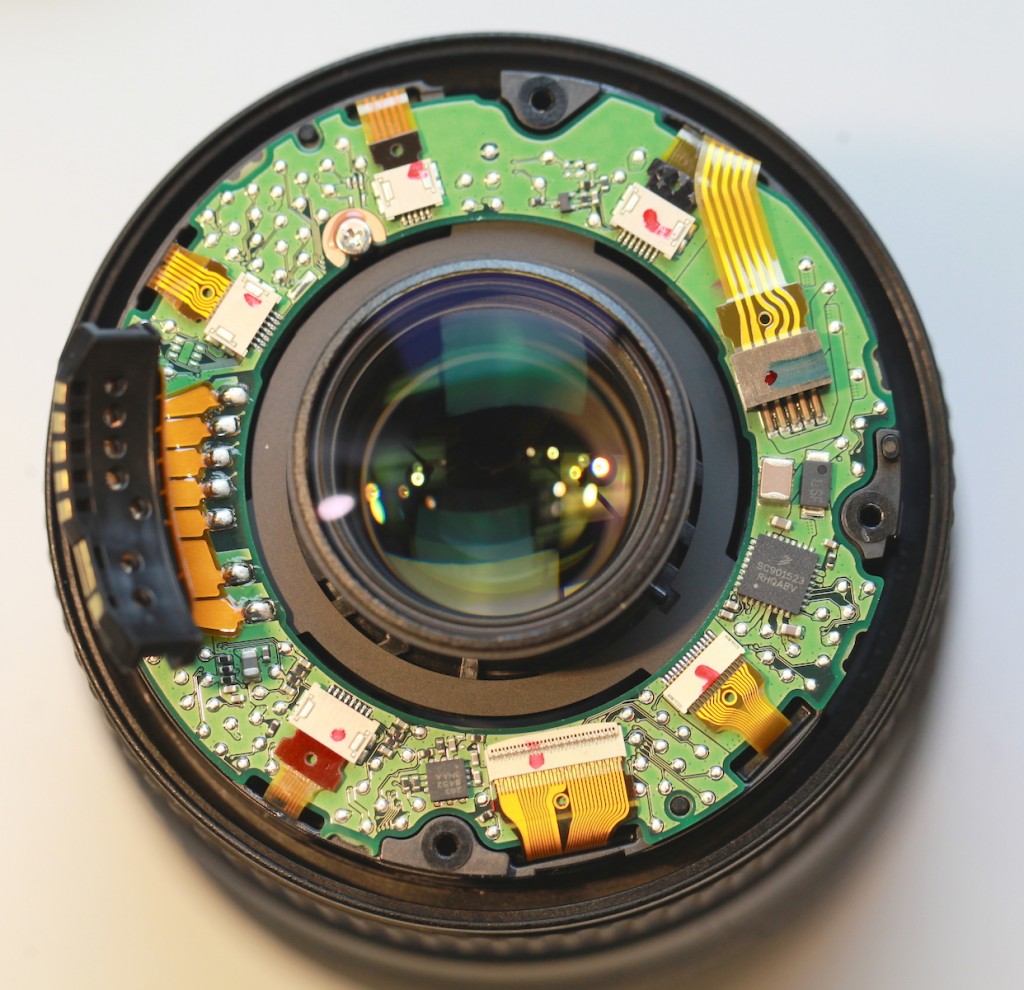 I always like the nice, clean way Canon’s engineers set up the circuitry on their PCBs. 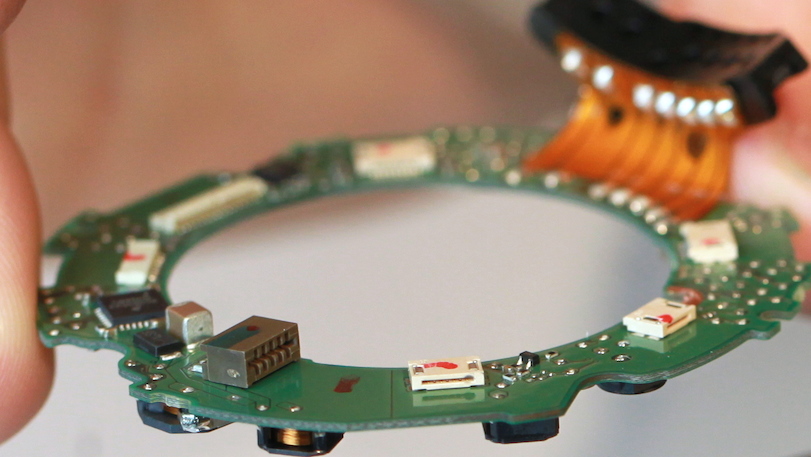 The zoom/rear barrel assembly comes off next. It’s not often you see a picture of screws in a disassembly post, but there’s a reason for it. The mount on this lens is held on by 7, count ’em, 7 large screws. The previous record we’ve seen is 6. I love some over-engineering; it’s always a good thing. 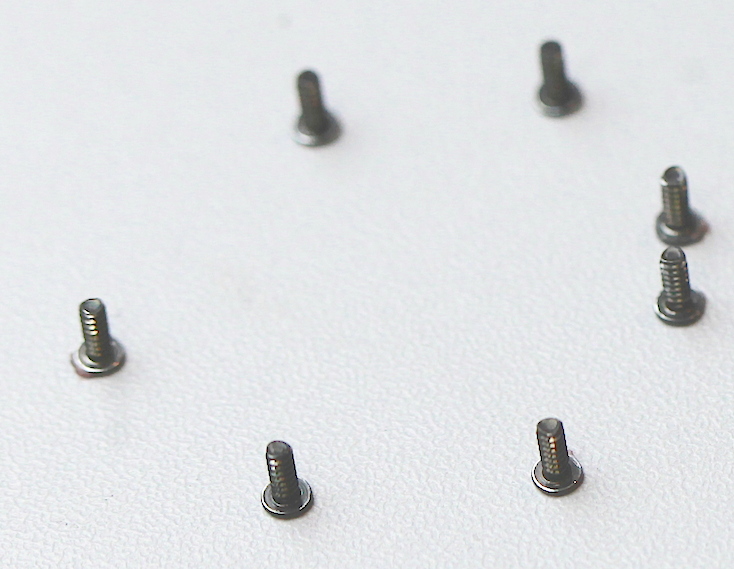 In addition to removing the screws, you have to peel up a protective metal cover and remove the zoom key before you can remove the zoom/rear barrel assembly. 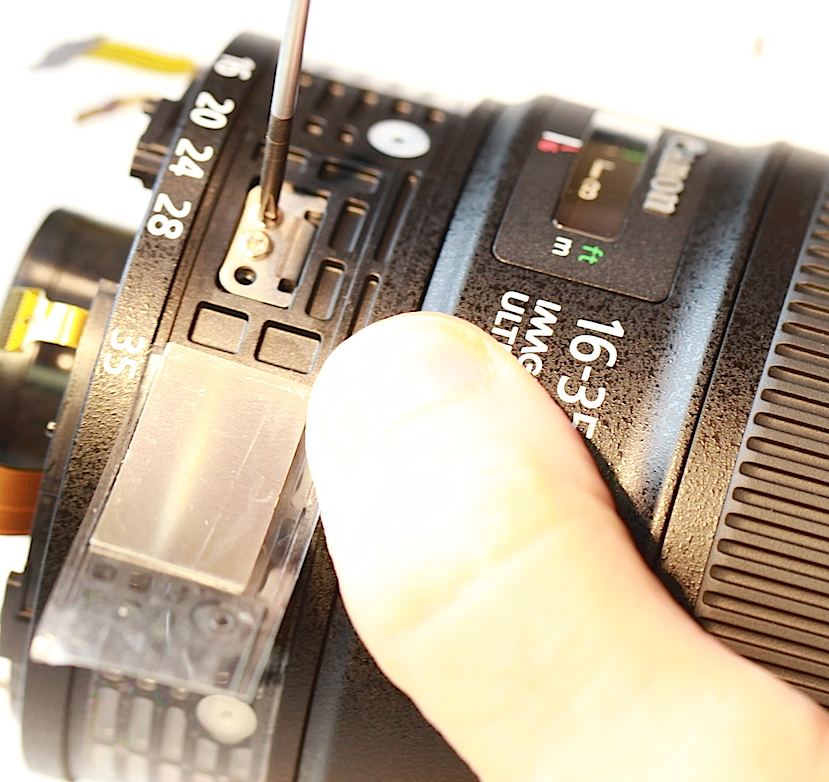 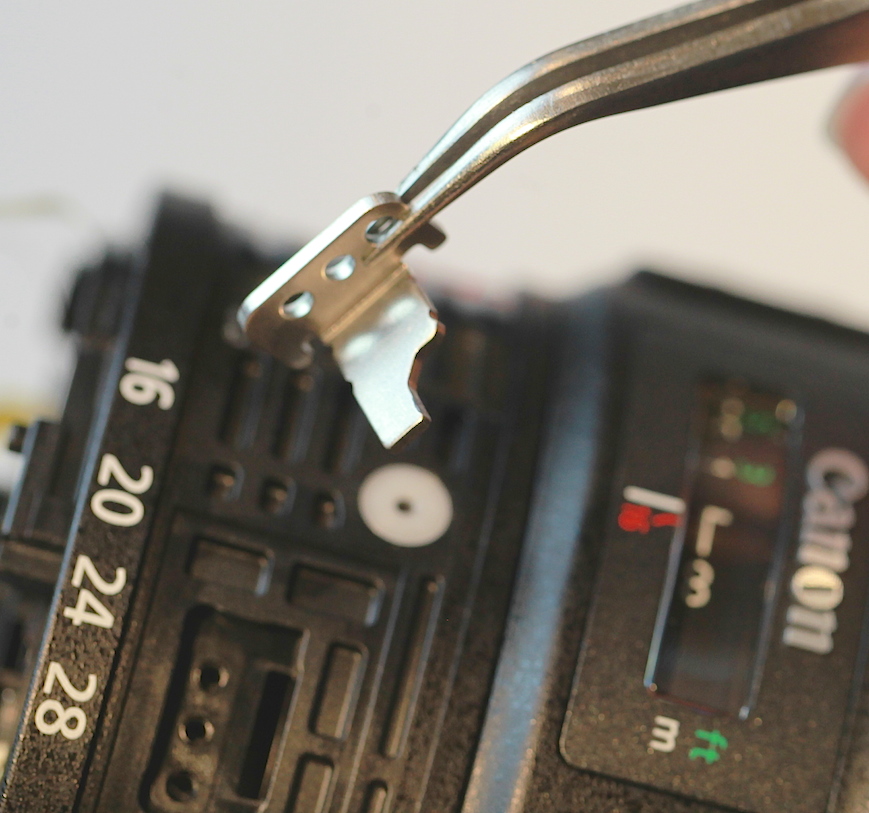 After which the assembly slides right off. 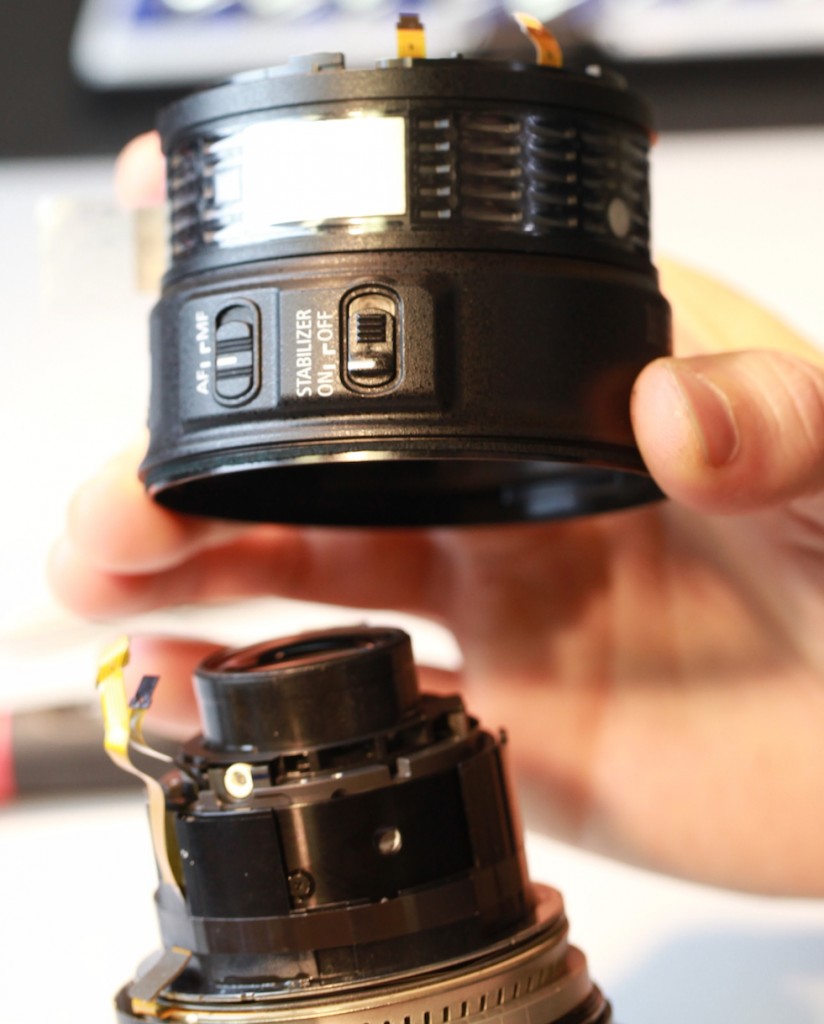 If you notice, the zoom ring has a ridged pattern, which is something we’ve not seen before. If you didn’t notice, well, here’s a closer view. 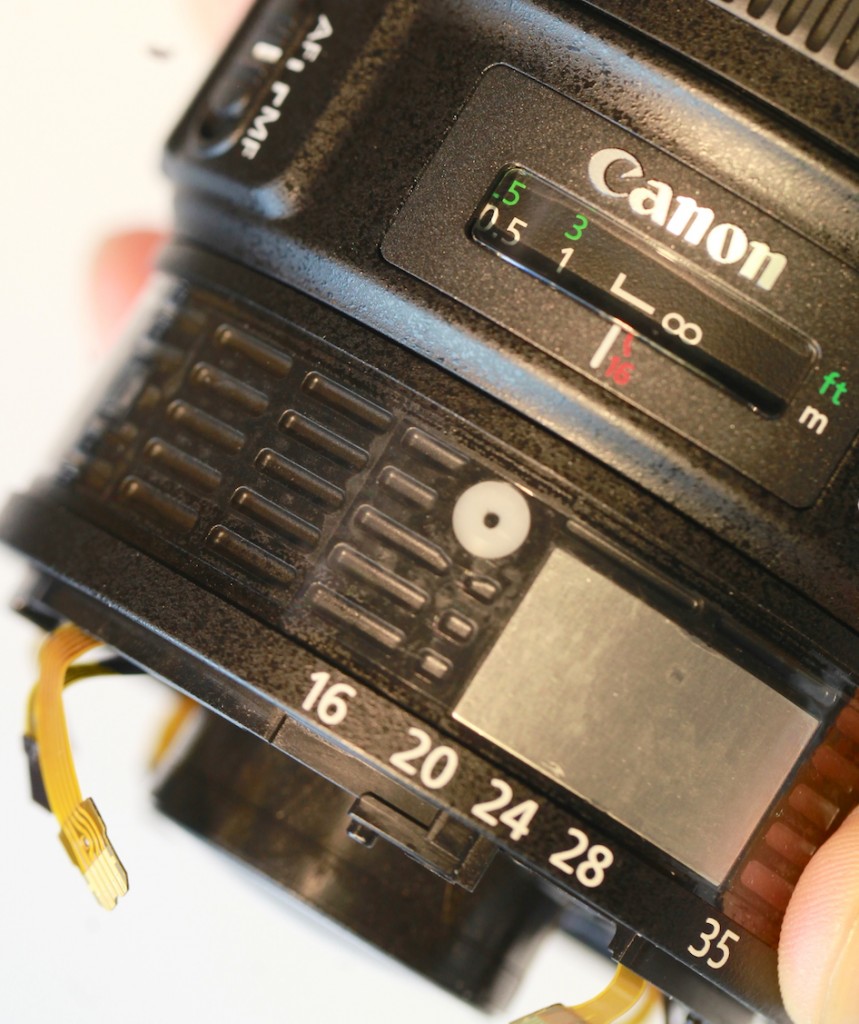 I think this may solve two problems we’ve seen on some recent Canon lens releases, like the 24-70 f/2.8 Mk II. First, it should help the zoom rubber stay in place (stretching zoom rubber is a minor problem on that lens).  Second, it should strengthen the actual zoom barrel. On several recent lenses the barrel has been made so thin that a dent in it will freeze, or at least really stiffen, the zoom ring. This barrel feels a lot stiffer than some previous lenses, which we could easily bend by just squeezing too hard. 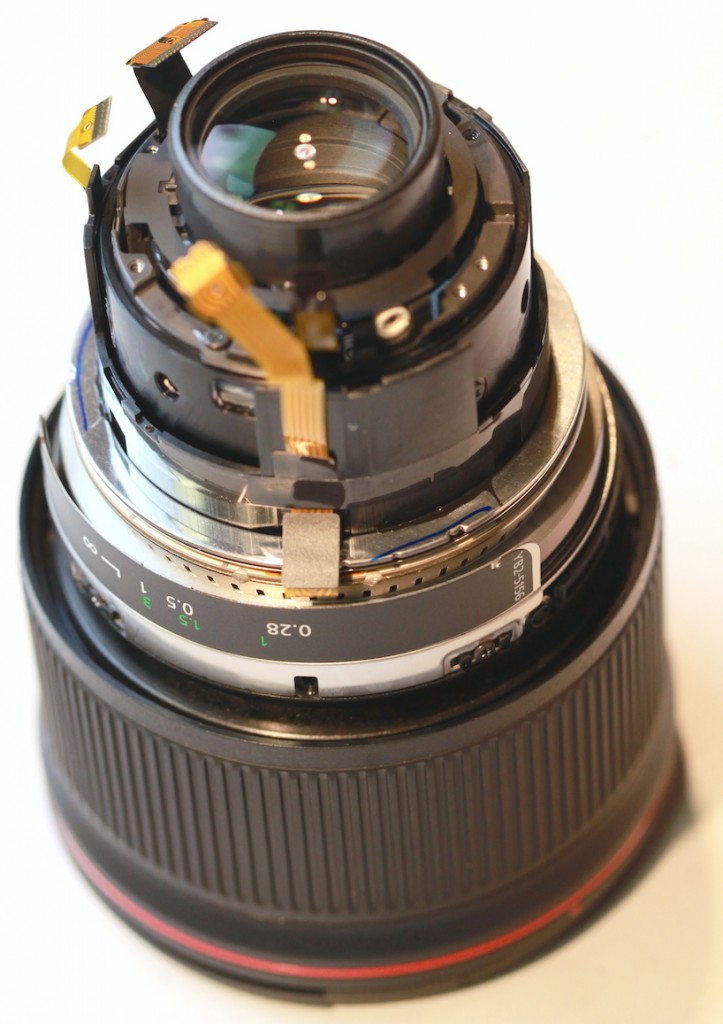 While we’re here, though, let’s take a close-up look at that large white adjusting collar you can sort of see near the top of the above picture. 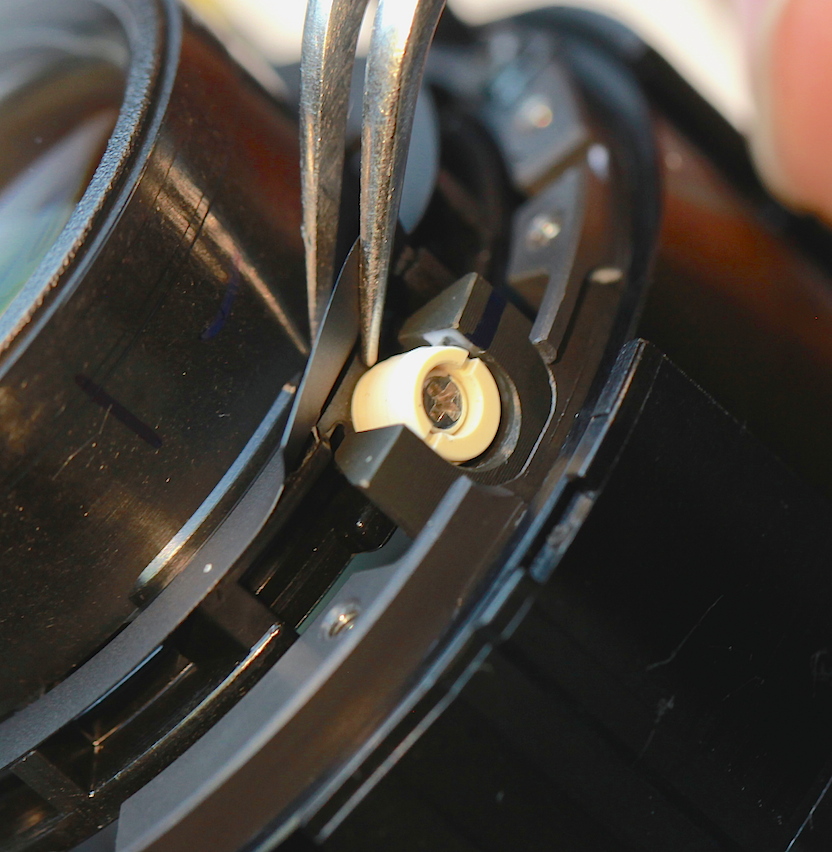 There are several points to make. First, this is a thick, robust collar, similar to what we’ve seen in the 24-70 f/4 IS. Second, the rear group is adjusted with these three collars spaced every 120 degrees. Adjustable collars are nice and precise.  In the 16-35 f/2.8 lens there are no adjustable collars; to center the rear element you loosen three screws and slide it into position by hand, then tighten the screws back down. (see Appendix)

Next we turned our attention to the front, where Canon had a couple of surprises for us. As with most Canon lenses, the name ring peels right off. But underneath the name ring is a second plastic ring. We assumed that would pop off, and ignored the little slots cut in it (red arrow). 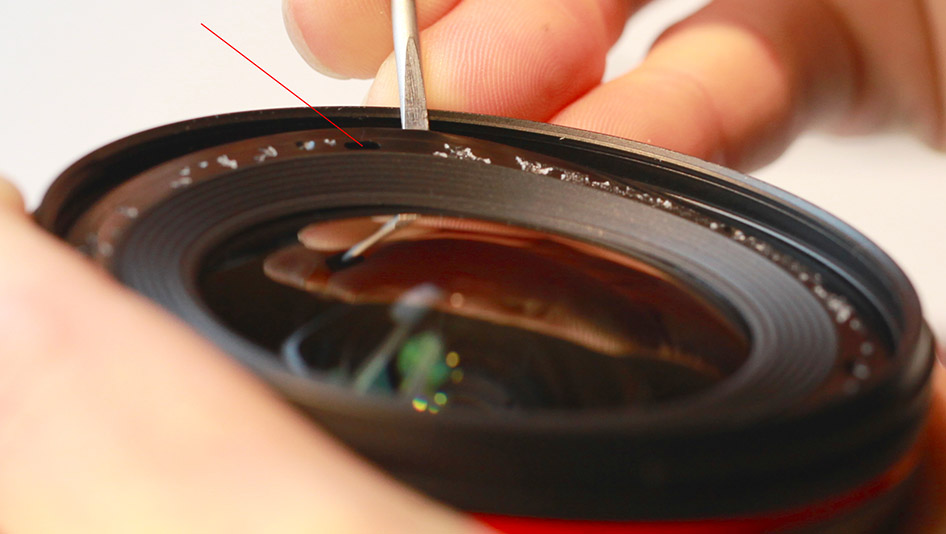 Turns out the slots are there for a purpose. The ring doesn’t pop off, as Aaron is ably demonstrating in the above image. Rather, it turns 45 degrees and comes right off because instead of little plastic pop-in pegs (which break a lot), it has a full bayonet-like mount, which holds it very snugly around the front element. It also has a thick rubber foam gasket (red line). It can’t be quite weather proof because the front element slides up and down within the barrel (the reason this lens needs a filter to be weather sealed), but it certainly must help. 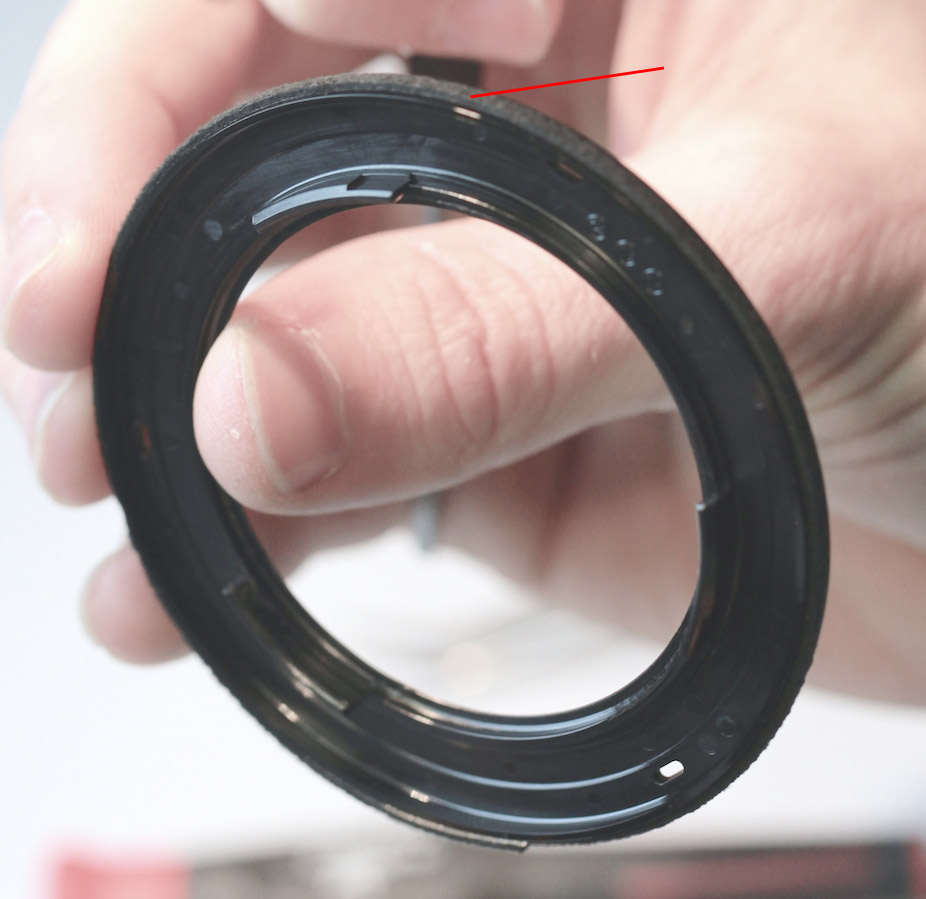 With the second makeup ring off, we can see that, again, Canon has used some robust screws to lock the front element in place. 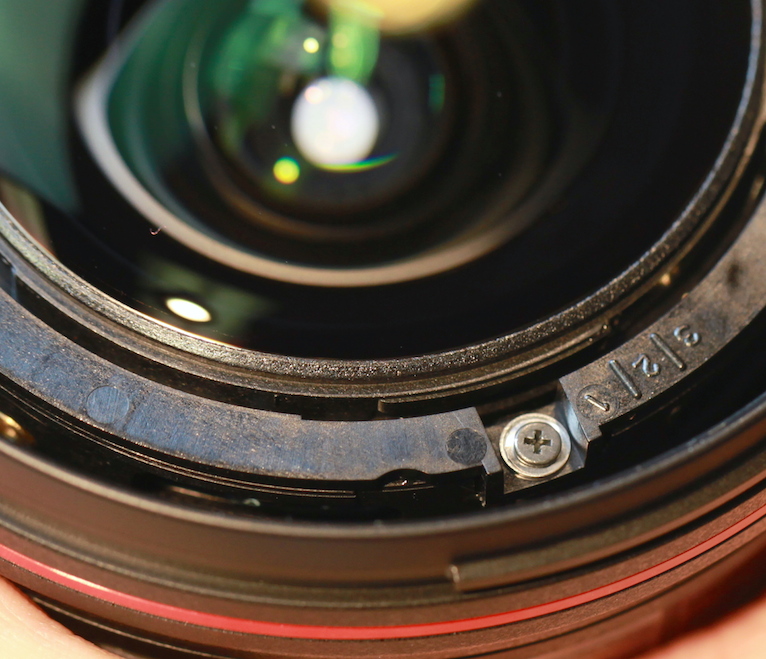 What you can’t see is that the screws holding the front barrel (or filter barrel if you prefer that term) are tucked way down inside. 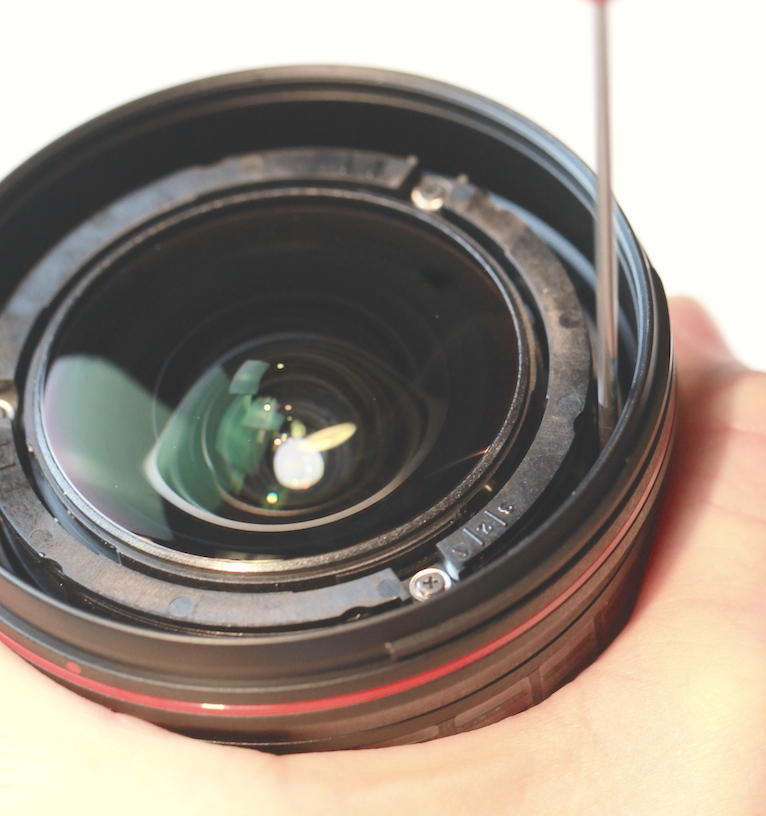 After which the front barrel comes right off. Notice how obvious the “asphericness” of the front element is. (Yes, I did make that word up. The nice thing about making up words is I don’t misspell them.) 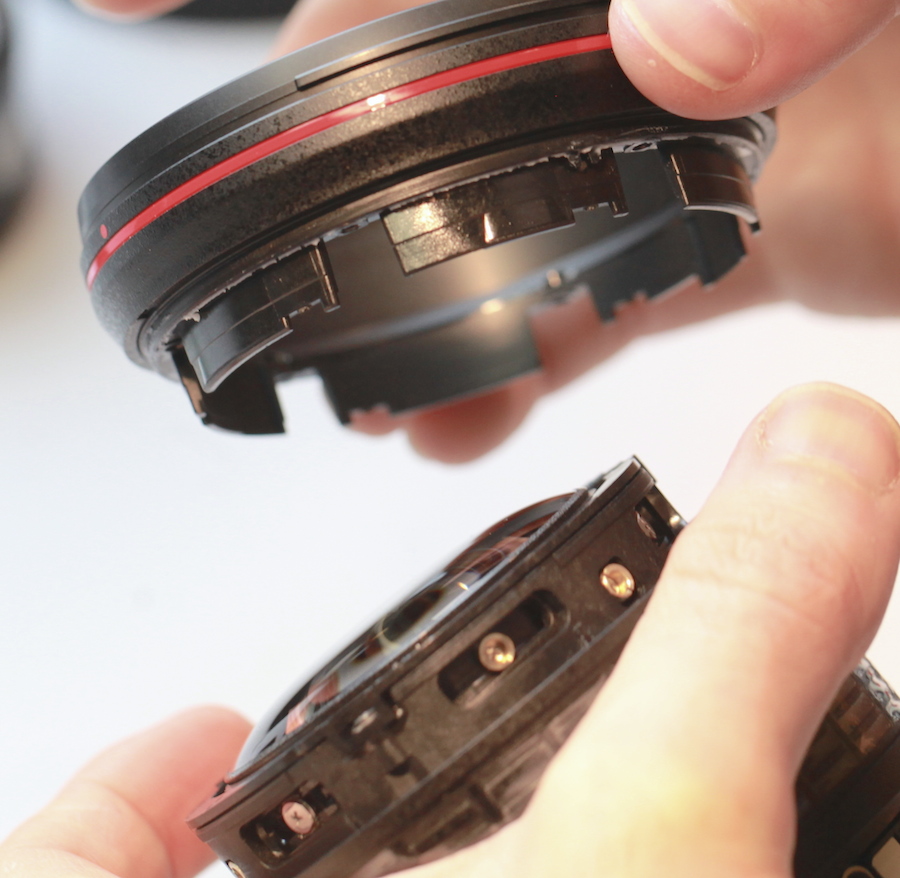 Now that the front barrel is off, we can see the front optical adjustment assembly.  The screw collar on the left is not adjustable, but there are adjustable concentrics at the other two locations at that element, allowing some tilt of that element also. There’s still a ramp, so rotation of the front element is used to correct spacing. This is definitely an improvement from the 16-35 f/2.8 (see Appendix). Here we have separate brass concentric collars and screws to adjust with. In the older lens there are plastic adjustment collars on a ramp. After they’re adjusted the slot is filled with silicone glue. 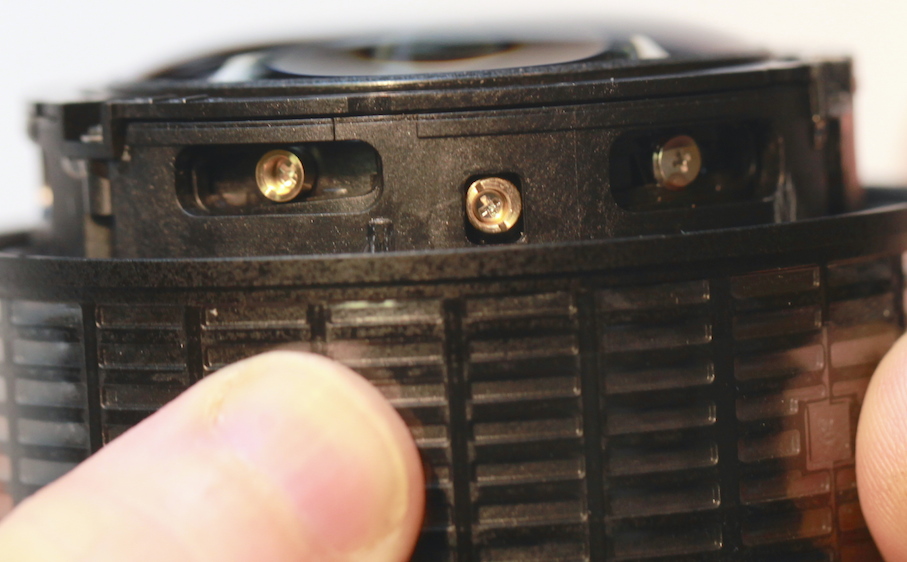 We decided not to disassemble the USM because we could see all of the remaining helicoid collars without doing so. All were robust and most were brass.

Now that I’ve seen the insides I’m very optimistic that this lens will be less likely to deteriorate optically over time, and will be more easily corrected when it does. We won’t know for sure until we’ve got a year’s experience with it, of course, but from a design and assembly standpoint it looks really, really good.

I know I’m beginning to sound like a Fanboy, especially considering I hardly ever mount a wide-angle zoom on my camera. But I guess the corny old line from the Most Interesting Man in the World works. “I don’t often shoot Canon wide angle zooms, but when I do, I prefer the 16-35 f/4 IS.”

FIrst, there are three screws like this that hold a round clamp over the rear group. When they are loosened you can slide the rear group around to adjust it’s centering. 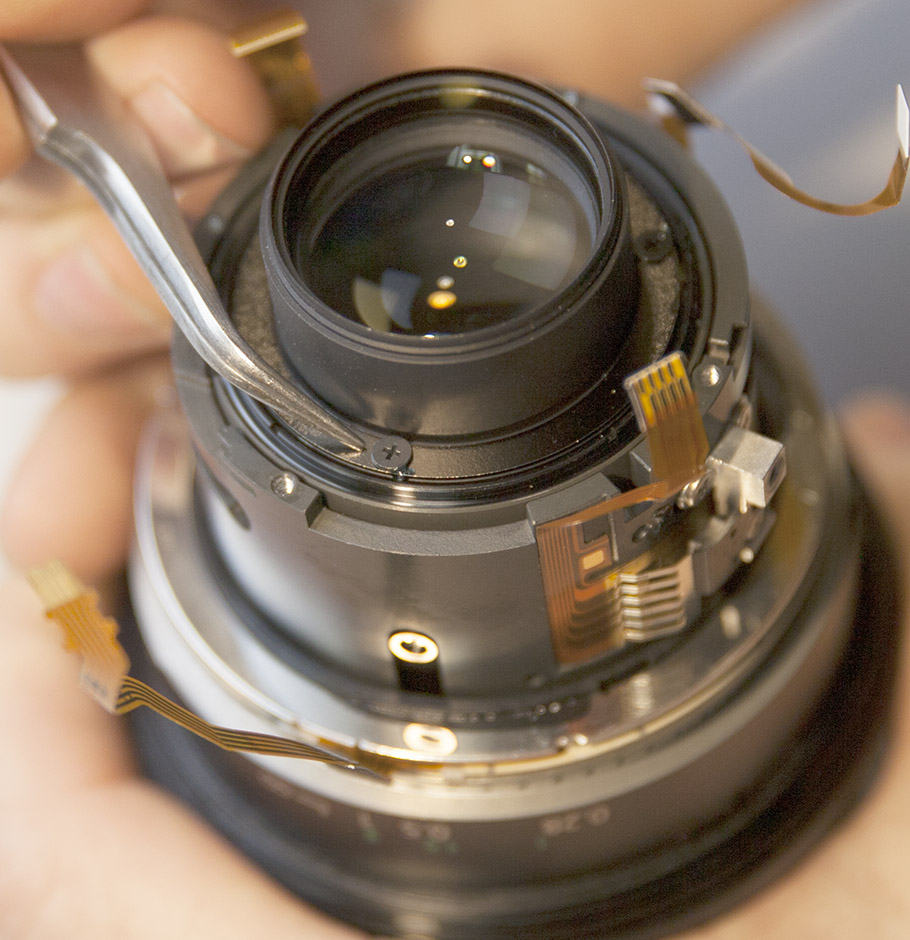 The front element has three adjustable collars. These set tilt, and then rotate along a ramp to space the front element. Once it’s in place the slots are filled with silicone gel that hardens locking them in place. Which is great until you need to adjust them (although it’s rarely necessary). 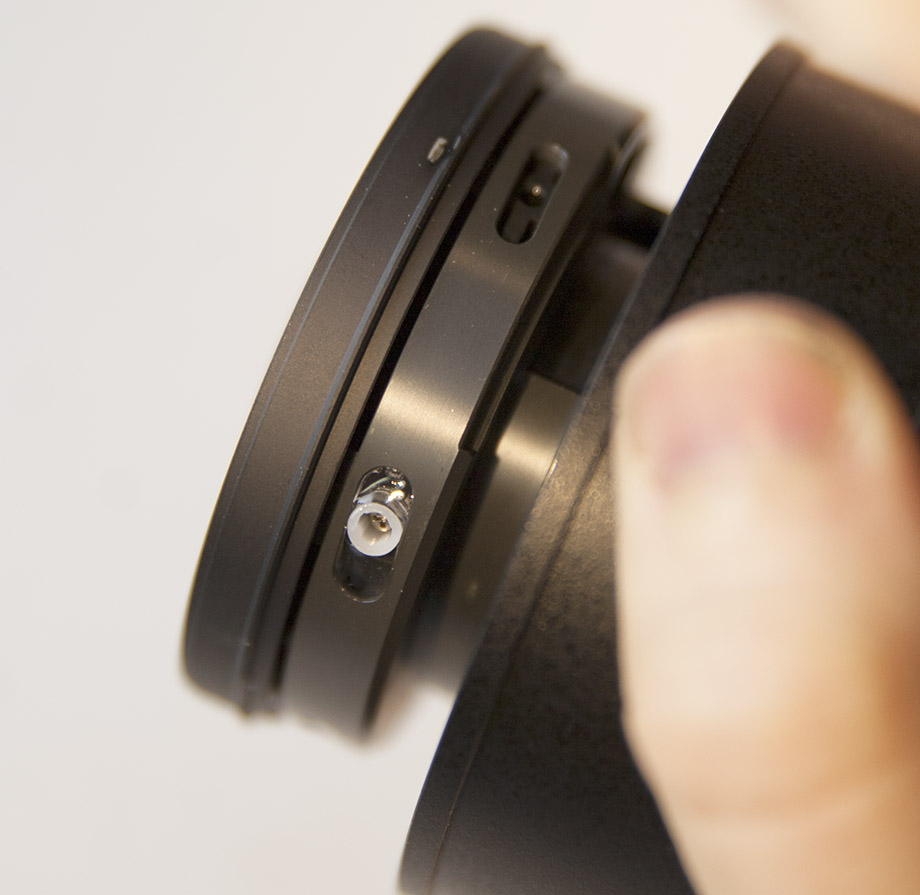 Fionally, way down deep in the lens under the USM motor are a couple of other concentric screws that can be adjusted. Way down deep pretty much means disassemble the entire lens, make your best guess at adjusting them, then reassemble and see how you did. Repeat. 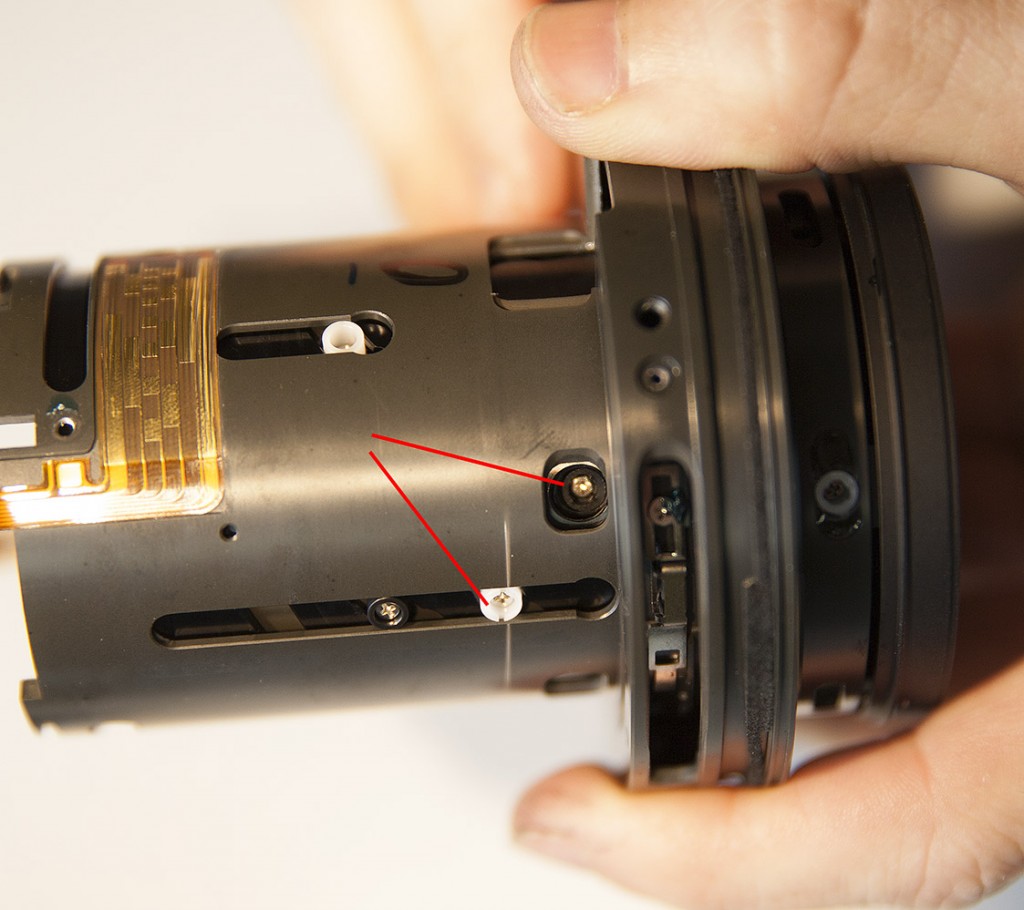 Hopefully this gives you some idea of why we love seeing those big, brass, accessible adjusting screws in the new version. Of course, you aren’t going to ever make optical adjustments, but somebody might be doing it for you some day. He or she will be a person who, 15 times during that adjustment process will decide if things are good enough, or if they could be a bit better. I’m all for everything that makes that more straightforward and simpler.