Most of you know I’ve been very impressed with Sigma’s new Art lenses. Their 35mm f/1.4 Art I still think is the sharpest 35mm prime lens made. The 50mm f/1.4 Art is also superb.

When I heard about the Sigma 24mm f/1.4 Art lens, I had some mixed emotions. I was excited that we might get a 24mm lens of similar quality to their 35mm. But the logical side of me thought that perhaps Sigma had bitten off a bit more than they could chew this time. Designing a wide-aperture 24mm lens is much more difficult than designing a fast 35mm lens. Even the best 24mm f/1.4 lenses (I consider the Canon 24mm f/1.4 L to be the best current offering, although that’s arguable) still have distortion, aberrations, and some edge softness.

But when our first five copies of the Sigma 24mm f/1.4 arrived, I swiped them from intake and took them over to the testing lab for a quick look and MTF testing on our optical bench. We already had results from the Canon 24mm f/1.4 L, the Nikon 24mm f/1.4 ED AF-S, and the Rokinon 24mm f/1.4 lenses in our database to compare them to.

As usual, MTF testing was done for five copies of each lens. Each copy was tested at four rotations (0, 45, 90, and 135 degrees) to give an average MTF across the entire surface of the lens, and the results for each lens then averaged. Prior to MTF testing, all lenses were double-checked on OLAF, our 5-micron pinhole collimated testing machine, to assure they were well-centered. Since the Sigma was the focus of this post, I’ll show its MTF curves compared to each of the other 24mm f/1.4 lenses.

Legend for all the MTF graphs 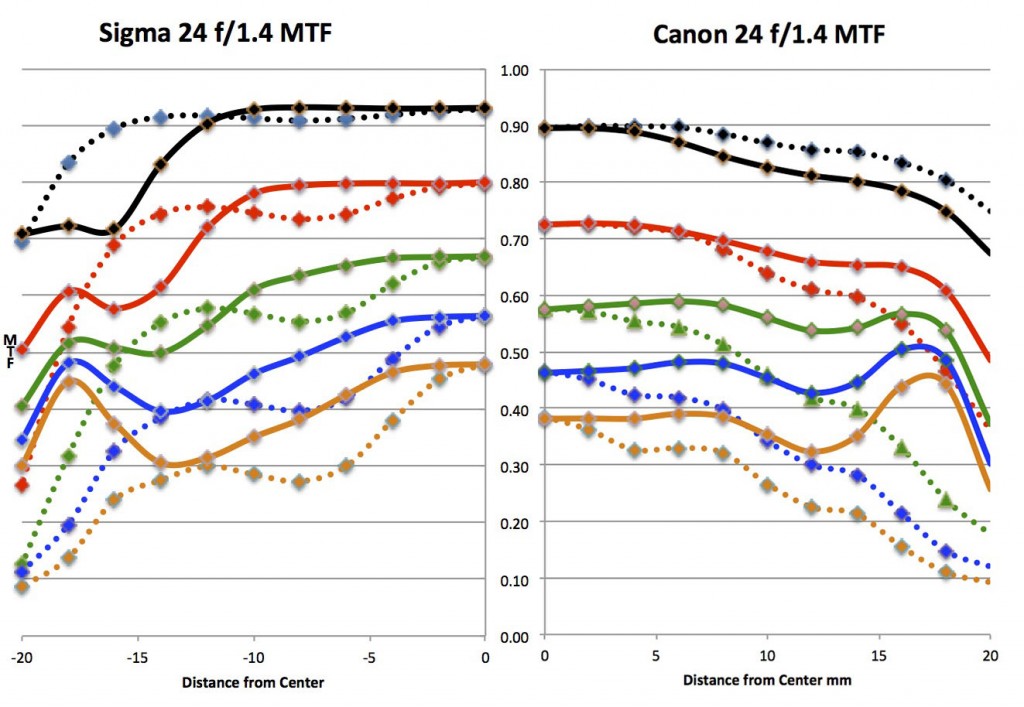 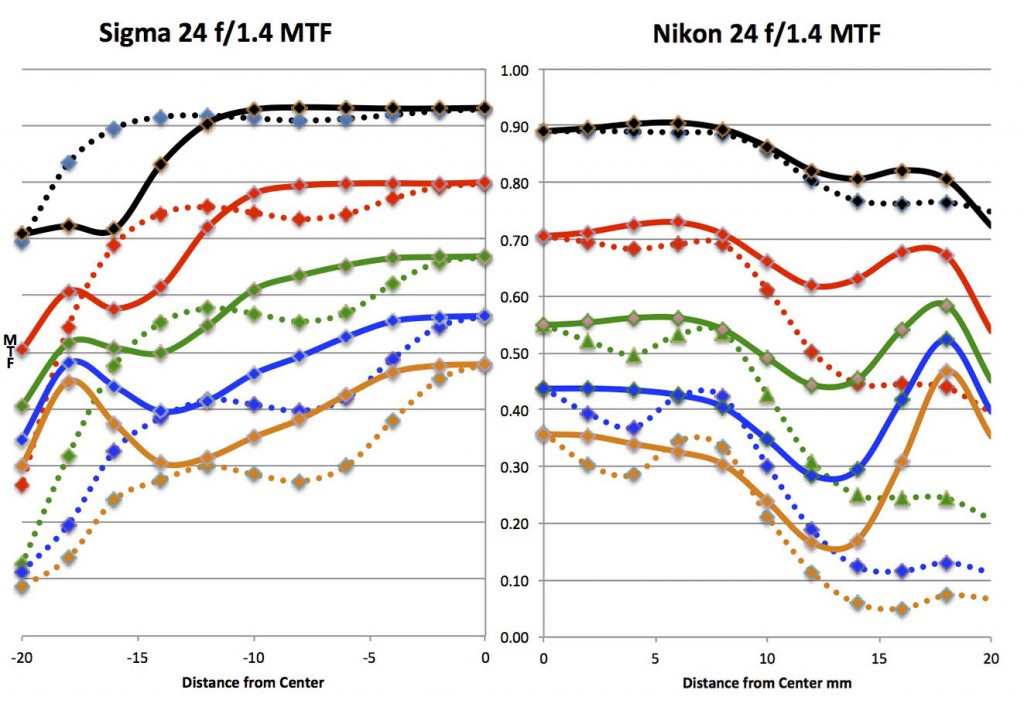 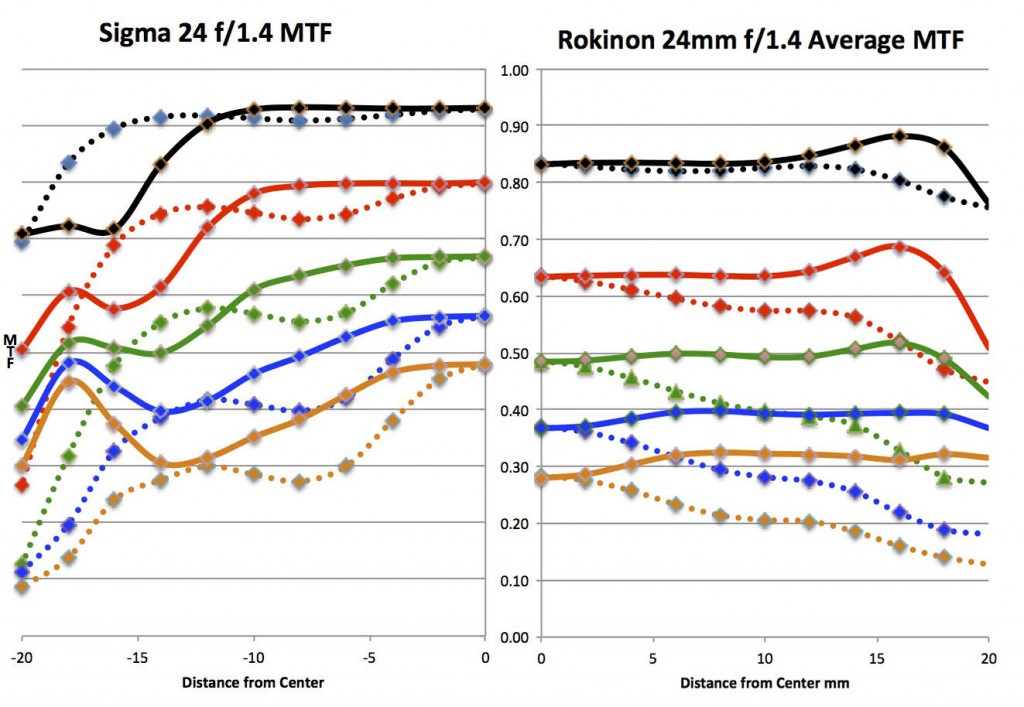 For those of you who don’t speak MTF, I’ll summarize a bit. In the center 1/2 of the lens (from 0 to 10mm) the Sigma clearly is more contrasty and has better resolution than even the Canon lens, especially at higher (40 lp/mm and 50 lp/mm) frequencies. In the outer part of the image (from 15mm to 20mm) though, the Canon and Sigma are about the same.  The Sigma is better than the Nikon all the way out to 15mm, but again, in the outer areas there is either no difference or the Nikon is slightly better.

The Rokinon is a rather different lens. It doesn’t resolve as well as either the Nikon or the Canon, and not nearly as well as the Sigma in the center of the image. The Rokinon’s advantage is that its curves remain flat almost to the very edge of the image circle, and again in this outer 1/4 of the image it is as good as the Sigma, or perhaps a bit better.

What the MTF curves suggest, then, is that Sigma has made the best resolving 24mm lens in the center of the image, but at the outer edges they’ve run up against the same aberrations and problems that designers of 24mm lenses have always faced, and haven’t managed to overcome those.

We haven’t always included field curvature diagrams in this little reports, but 24mm wide-aperture lenses tend to have a lot of curvature so it seemed a good idea. 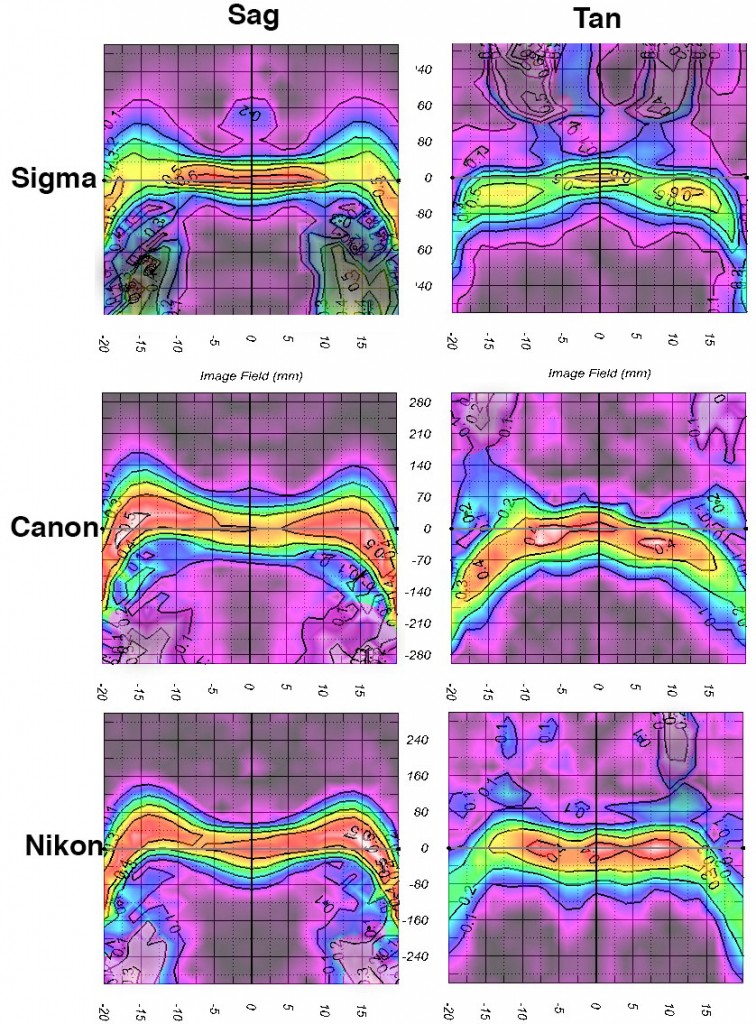 You’ll notice, of course, that the difference in Sagittal and Tangential field curvatures parallels the increased astigmatism areas you see on the MTF graphs above. But notice also how the fields curve very severely in all of these lenses out in the edge area of the image, from 15mm to 20mm. This is part of the problem we always see with 24mm wide-aperture lenses and it seems that current lens technology cannot quite overcome this.

It might help to give you an image from Olaf, our 5-micron pinhole machine we use for testing centering. With the lens set at infinity focus, we manually focus the lens a few microns at a time.

If we focus on the center point, the corners are well out of focus, like this: 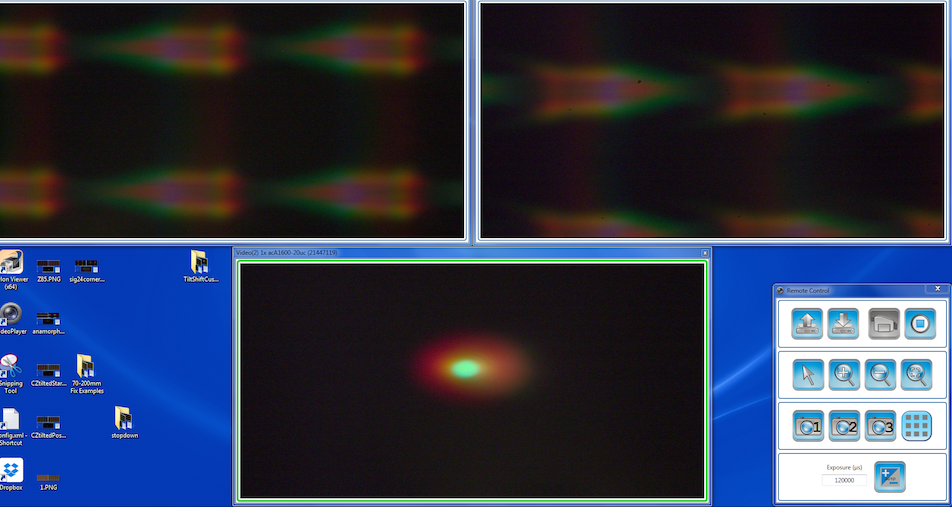 We can focus on the edges and make them nice and sharp, but doing so defocuses the center quite badly. 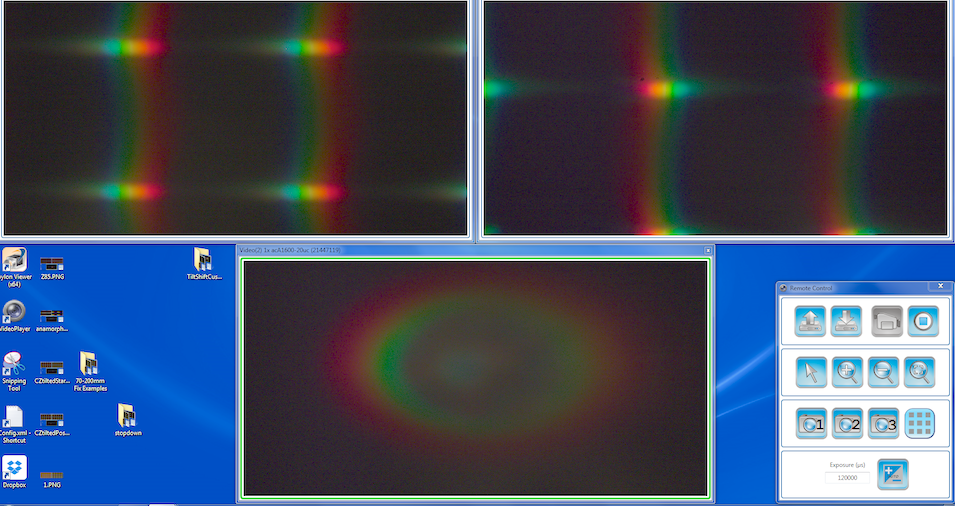 Even stopped down to f/5.6 the focus plane at center and edge is quite different. 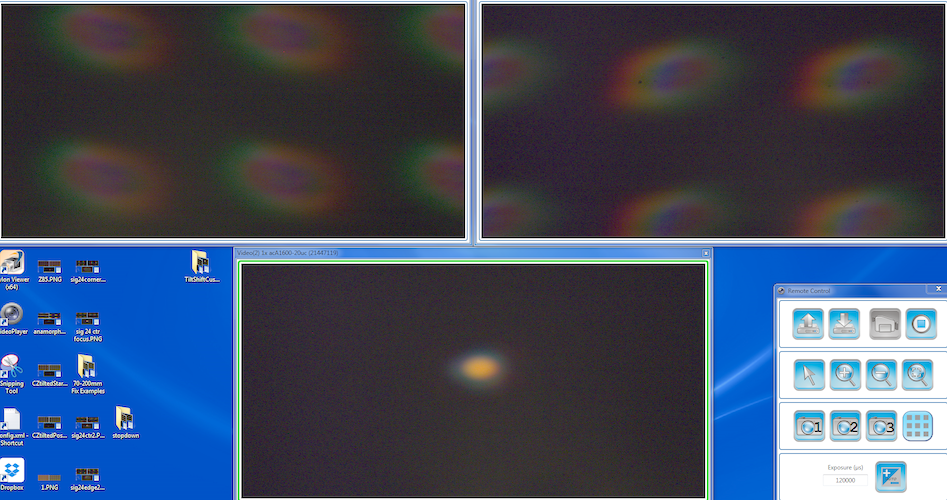 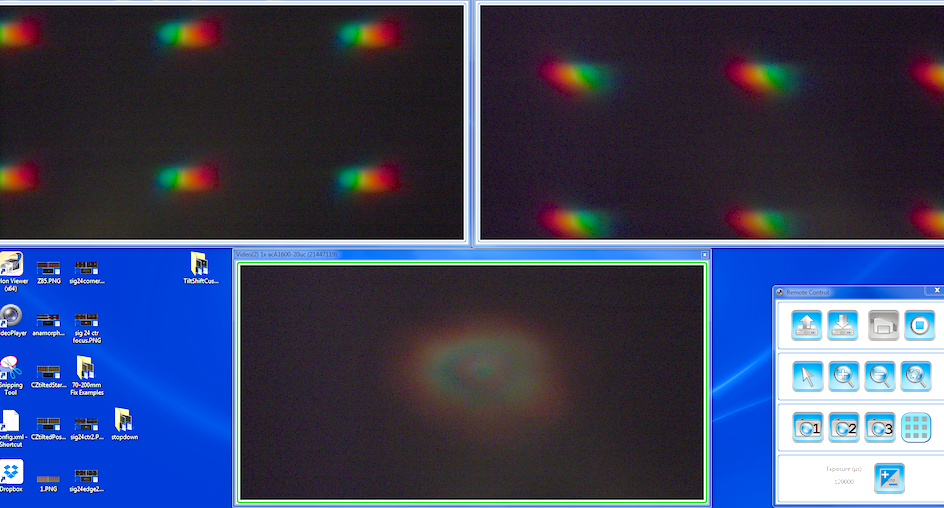 Let me be clear here: the Nikon and Canon lenses are not any better as far as field curvature. I just saw no reason to post all those images up to show you the same thing over and over. The Rokinon is not as extreme, but then part of that is because it’s never as sharp at any point as the others are. I should also mention sample variation with the latter lens is much greater – you’ll rarely see both sides in the same focus plane with that lens.

The new Sigma 24mm f/1.4 Art lens does, indeed, out resolve the offerings from the major manufacturers, at least in the center of the image. At the edges, though, the advantage disappears. More importantly with any 24mm f/1.4 lens, try as you will, unless you really stop the lens way down you aren’t going to get a flat field of focus. And if you are going to stop the lens way down, why invest all the extra money for a wider aperture lens.

That doesn’t make these bad lenses. There are clearly some types of photography that this focal length is invaluable for, and in that case you just learn to work around the shortcomings. In many cases, though, the old rule that the best 24mm f/1.4 is a 35mm f/1.4 and a few steps backwards is often true.