Yes, indeed, I learned my lesson. I’ve had MTFs on a few copies of the Canon 35mm f/1.4 Mk II lens for a while now, but I wasn’t about to publish the results until I had a full 10-sample group done to get a thorough look at them.

If you don’t like pretty graphs, then I’ll give you the quick summary first: the new lens is significantly better than the original 35mm f/1.4, particularly in the edges and the corners. The difference is pretty significant and should be apparent in most photographs. That, of course, only tells you about the MTF. Others are already reviewing the lens and will comment on how it handles and focuses, what the bokeh and vignetting are like and whether that Blue Spectrum Refractive Optics makes all of the lateral color aberrations go away.

As an aside, for those of you who think Blue Spectrum Refractive Optics sounds like Canon has joined some of the other manufacturers in throwing out some marketing hyperbole, I agree with you. I’m not saying it doesn’t work, I’m just saying throwing magic words at me without telling me what it is and how it works, well, color me Cynical Blue. They do give some hints about what Blue Spectrum Optics are in a few places. If I was to guess, and I’m just guessing, it’s a new glass glue that refracts blue light and fills the space in a cemented group. I suspect it works really well. I suspect it would have worked just as well without the marketing department giving it a silly name and chanting spells over it.

As (almost) always, the MTF results we present are the average of 10 copies, each copy tested at 4 different rotations. 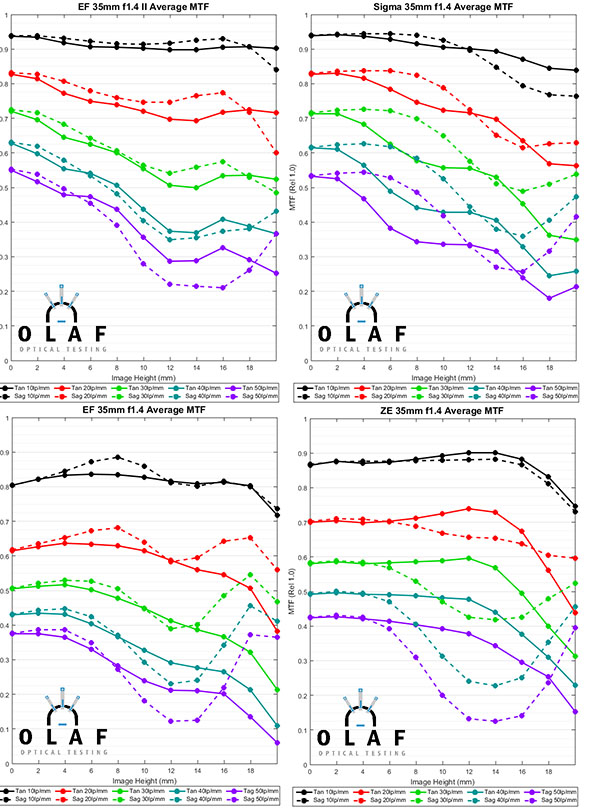 The new Canon lens is clearly and definitely better than the very good lens it replaces, both on and off axis. It is also better, from an MTF standpoint, than the Zeiss 35mm f/1.4. When we look at the average MTF curves, it’s a tiny bit better, even, than the Sigma 35mm f/1.4 Art lens, although the difference is small. The two lenses are very close with the Canon being slightly better off axis (14 to 20mm) at 10 and 20 line pairs frequency. Could you tell the difference in a photograph? I doubt it, they’d be nearly identical. Other things like vignetting, focus accuracy, out of focus highlights, cost, etc., would be much more important to you than this slight MTF difference.

Wide-angle, wide-aperture lenses tend to have some sample variation. That makes a difference, especially when we compare reviews of these lenses. The new Canon 35mm f/1.4 Mk II does pretty well compared to other wide angle lenses. 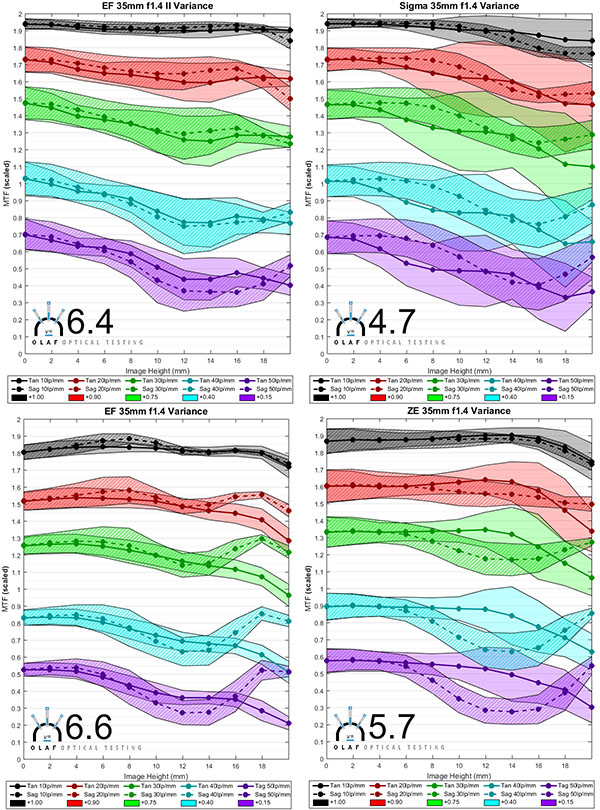 Remember, the consistency number is a very blunt tool. Look at the graphs, too, they give you much more information. The one thing I think stands out about the graphs with all of these lenses is we see some variation all the way to the “0” point of the charts. That means there’s some variation in center sharpness, not just off-axis variation caused by a weak corner. But overall, both of the Canon lenses, as well as the Zeiss lens, have good consistency. The Sigma 35mm isn’t quite as good, but still acceptable. I’m still puzzled about why that is — the other Sigma Art series lenses tend to be extremely consistent.

Again, that’s from an MTF standpoint. There’s a lot more to a lens than its MTF, but this is the one bit of information I can give that isn’t readily available elsewhere.

Everyone always asks me if I would buy this lens. Honestly, I’m not sure that I would just on the basis of the MTF charts. It’s the best 35mm by just a whisker over the Sigma 35mm f/1.4, but at nearly twice the price. As more reviewers weigh in there may well show other things that make it worth the price difference. A lot of people only consider Canon lenses, though, and I expect many of them will be upgrading from the Canon 35mm f/1.4 for the increased resolution the new lens gives them.