Is the New RED Weapon, the Weapon of Choice? 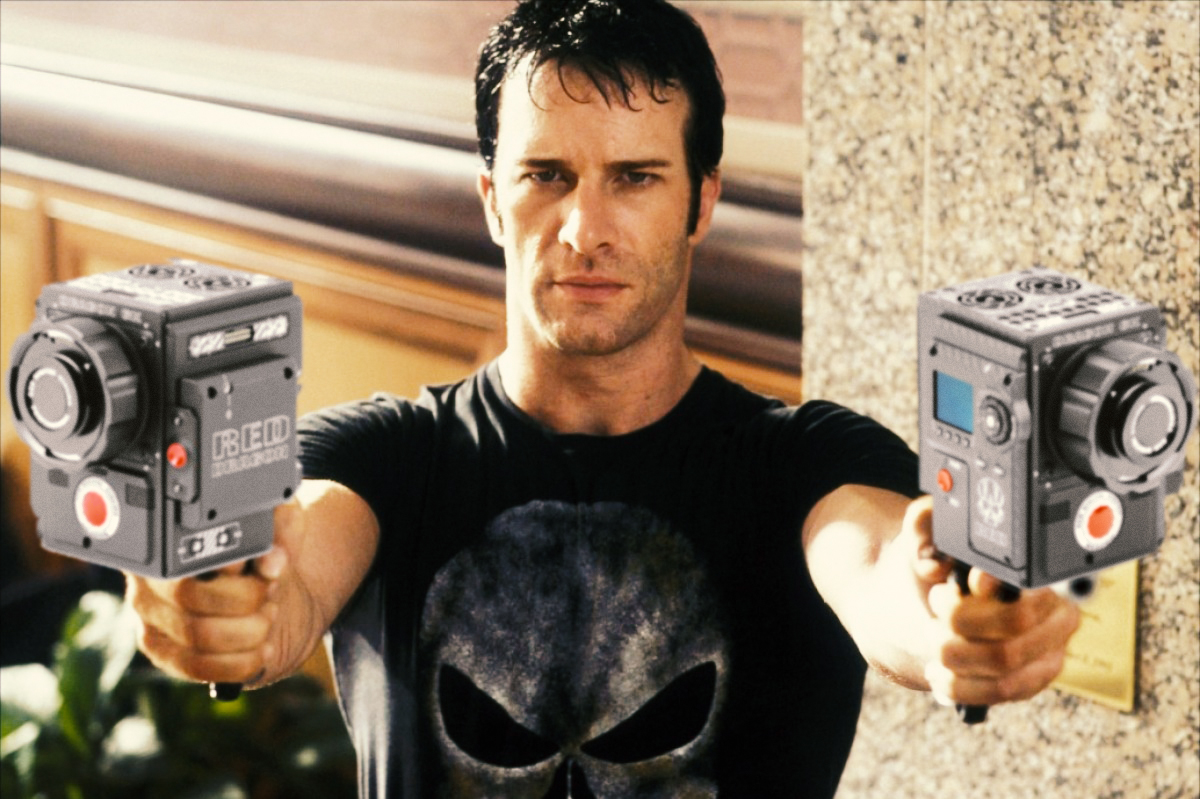 The choice is simple; are you cool, or are you boring? That has to be the big decision RED wants you to make, right? Sure, the argument could be made that you choose RED for the stunning 6K resolution that it offers, or the 16.5 plus glorious stops of dynamic range, but really you want it because there’s a skull on it, and you are a video pirate. Cool right? Worth upgrading your Epic right?

The truth is, RED’s Weapon camera offers very little in technical improvements over the RED Epic Dragon. The sensor in the Weapon is the exact same 6K RED Dragon sensor, which means, the same resolution options, the same dynamic range and the same signal to noise ratio. Another way to put it is that the Weapon offers the exact same recording options and same frame rates at the same resolutions. The primary difference technically is the integrated Mini-Mag media bay, which offers faster data rates when using the Mini-Mags over those allowed by the Epic Dragon. Currently, the only advantages are lower available compression ratios at all record options. Presumably these higher data rates will also assist with future feature set upgrades, whether it be through new sensor technology, or firmware. 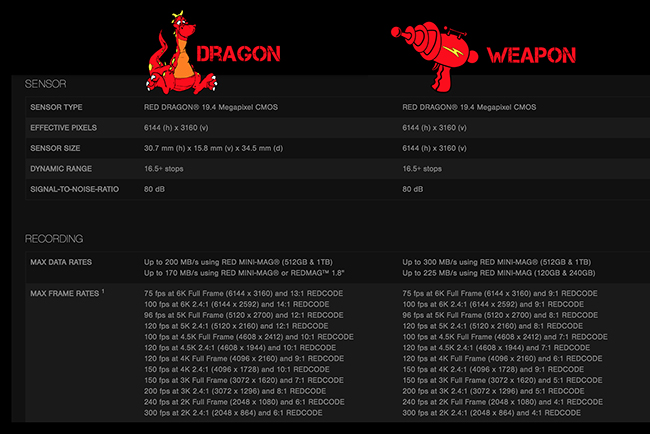 Another improvement, over the Epic Dragon build, is that RED has reduced the weight of the camera by almost two pounds. By using a combination of aluminum, and magnesium alloys, they have managed to shave off the pounds, without compromising the rugged build quality of their product. This improvement vastly helps gimbal and drone operators with their delicate balancing act of keeping a rigs weight within spec, but also allows for fewer compromises with lens and accessory choices, when weight limits become a factor.

Additionally, one nice feature added to the Weapon is the ability to record in Apple ProRes (and a near future DNxHD option has been promised). This codec option offers productions greater ability to fit footage shot on RED into a variety of workflows that may not call for RAW recording. Moreover, simultaneous RD3 and ProRes acquisition, allow for seamless proxy workflow. Built in 3D LUT support and wi-fi control further round out the new built-in feature set on this camera.

An added feature built into Weapon is simplified swapping of the camera’s optical low pass filter. The new OLPFs can be removed and installed with the simple turn of a torx key, however, it should be noted, the “fast-swap” still requires powering down the camera, removing the lens mount, and exposing the sensor to dirt and debris. RED currently offers 3 flavors of their OLPF (standard, low light optimized, and skin tone), fined tuned for different shooting situations.

The ability to customize and expand your RED to fit a variety of shooting scenarios has been at the heart of the RED camera design since introducing the first Digital Stills and Motion Camera (DSMC) build. RED trademarked the phrase “Obsolescence Obsolete”, which trumpets the expandability and upgradability of the RED camera line. With the expansion into Weapon , RED sort-of holds up this statement. Some accessories carry over directly such as all of the available lens mounts, which adapt directly to the Weapon using the same four torx screws. Those who have Mini-mags will also get to carry them through to Weapon, however, by integrating the SSD module directly to the brain, RED has made adoption of Mini-Mag SSDs mandatory moving forward. Other accessories can be brought over to the Weapon via available adapters. These include DSMC LCD Touch units and cabled battery plates. Unfortunately, for some accessories, such as the DSMC Side Handle and the Switchblade, the Weapon is a rocky place where they can find no purchase.

New DSMC2 accessories have been designed to integrate directly with the Weapon brain. These include cable-less LCD Touch units and battery plates which aim to streamline the RED and presumably cut down on weight and umbilicals to optimize use in a variety of shooting scenarios. For a breakdown of compatibility, you can take a look at this PDF.

Overall, Weapon is a minor technical advance for RED. Weapon’s use of the Dragon 6K sensor mean image quality and resolution are identical to that of the Epic Dragon. Still, the truth is, if you are a RED owner, you’ll eventually need to bite the bullet and upgrade your camera, so you can take advantages of newer technology when it becomes available. Fortunately, the camera’s expanded functionality, including features like ProRes codecs and built in LUT support, should offer enough incentive to justify adoption of the new system. 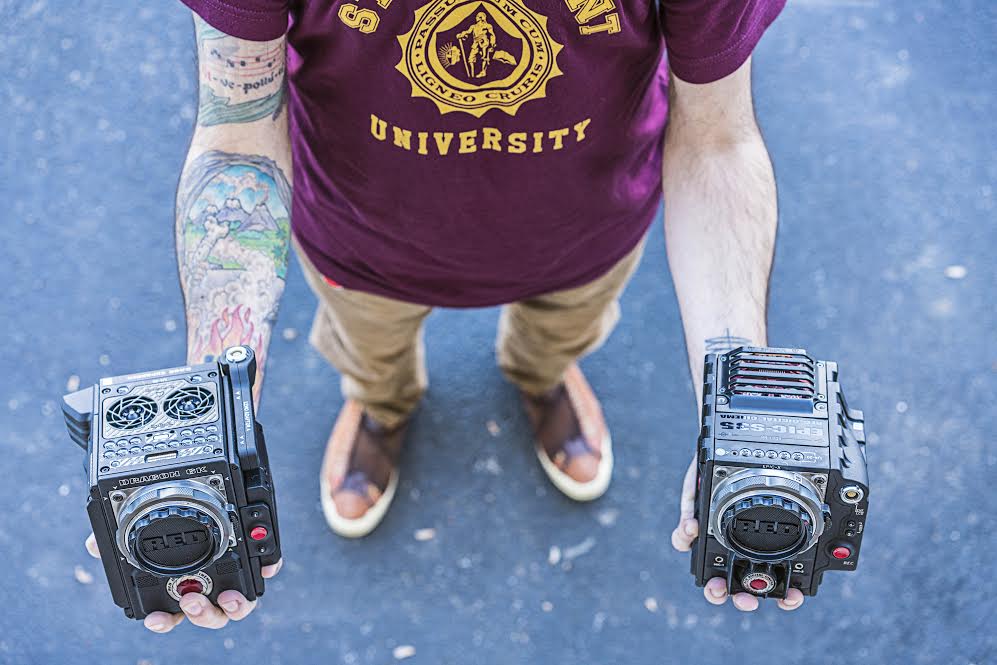 The big question remains; Can these upgrades help the camera find a new audience? Obviously, there are some major adherents to RED cameras and what they can do, but do you need it for your shoot? I feel that the camera is too much for most shoots. RED’s previous cameras require a certain kind of “check the gate” discipline and multiple member camera departments, found on motion picture sets. My experience with Weapon leads me to believe the same. Smaller shoots, requiring “run-n-gun” style shooting are still better served by cameras like the Canon C300 Mark II and Sony FS7, which are feature rich, and were designed with single shooter operation in mind.

If you still want to shoot on RED, I suggest you strongly consider renting the RED Epic Dragon over the RED Weapon. Unless you know you need the lower compression ratios for your project, you want to try before you buy, or you want to make sure your camera rig fits within a specific weight limit, there is really no compelling argument to be made right now for choosing RED Weapon.

I enjoy shooting vignettes featuring my daughter and her progress through life, as well as elaborate photoshop projects featuring my dog Penny Lane. Apart from that, the normal “I went to film school” aspirational short films and music videos. I do not shoot weddings