A Look at the New Sigma MC-11 Lens Adapter 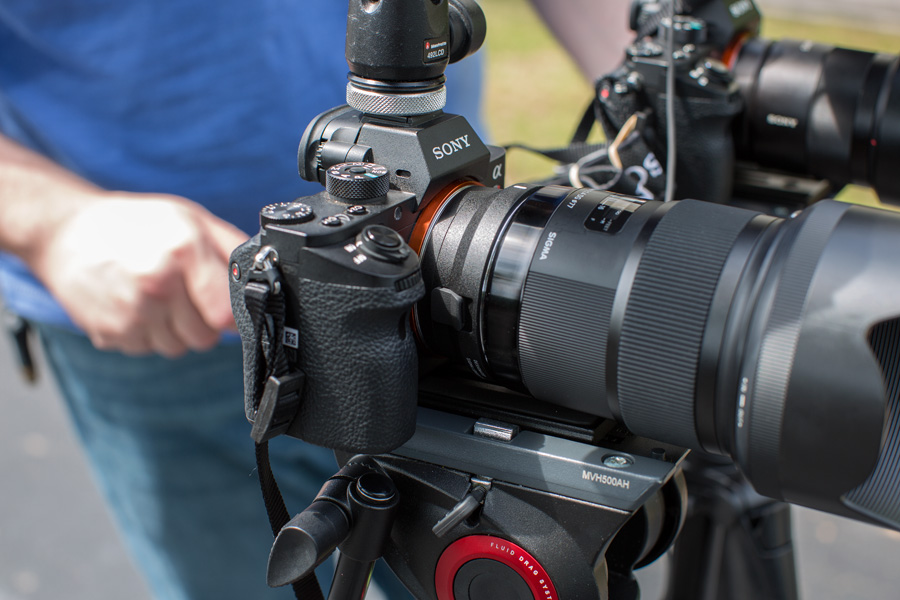 We’ve recently received the Sigma MC-11 Sony E to Canon EF mount adapter which promises full autofocus functionality for 15 Sigma Art Lenses on Sony E-mount cameras. What the Sigma MC-11 brings to the table is the ability to use face detection, eye recognition, and the use of continuous phase detection autofocus in video mode. This means being able to use a third party lens just like you would a native FE mount lens, which is a new luxury that makes e-mount cameras even more versatile. It’s great news for Sony users that want a larger lens selection for video and stills but are not attracted to the limited capabilities and high failure rate of the Metabones adapters.

The Metabones adapters give a tempting promise of being able to use the larger Canon, Nikon, and Sony A- mount on smaller mounts like the micro 4/3 and Sony E-mount. Many times they work and provide aperture control and support image stabilization, but we have routine problems with these adapters that can be quite frustrating. The most common being a loss or lack of electronic connection between lens and camera, sometimes creating errors and freezing in the camera. The adapters also regularly have screws coming loose and other functional issues. We state a warning to customers on the individual product pages discouraging against relying on the adapter for the success of the shoot.

We would like to find out how well the new Sigma MC-11 performs for video and stills shooters, and how it holds up over time. If it’s built well and works well shooting Sigma Art lenses we are happy. That alone really triples the number of fast AF primes. And when I asked Roger what he wanted from the adapter he told me, “I just want to be able to shoot a Sigma 35mm f/1.4 on an A7RII.” The Sony FE 35mm f/1.4 has a lot of sample variation and tends to be tilted, and Roger’s eyes are old and tired.  It also costs more than the Sigma 35mm and Mc-11 combined. Similar stories for the rest of the lineup, Sigma is beating out Sony either in optics, price, or selection, so the chance to use these on the Sony cameras is quite exciting.

The Sigma MC-11 is solid. The release knob is in a convenient and easy to reach spot and seems very well built. The adapter mounts to both camera and lens with ease and there is little no wiggle when a camera, adapter, and lens are all attached. Common problems we have had in the past with the build of the Metabones adapters are mount wiggle and failure of the release knob. The Sigma already seems to be a bit more rugged.

The MC-11 is compatible with 15 Sigma art lenses, and with these lenses the autofocus works much like if you were using a native E-mount lens, utilizing all focus points and face detection. Here is the list of compatible lenses from Sigma’s website: 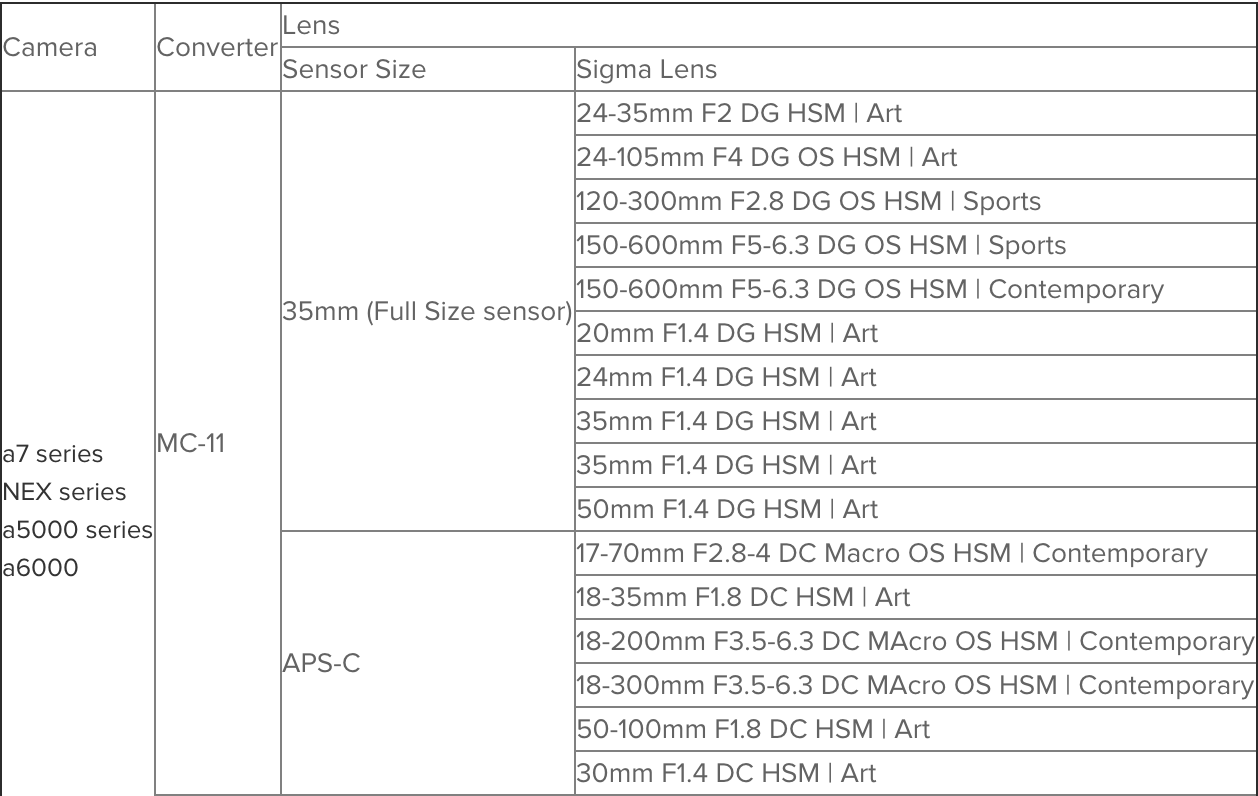 In the video below you can see a comparison between a Sony FE 55mm f/1.8 on an a7RII and a Sigma 50mm f/1.4 + Sigma MC-11 adapter on the same camera using the same settings. The autofocus on the camera itself isn’t the best for video, but both setups performed about the same, with the native mount lens coming out slightly ahead.

We also explored the exciting new opportunity to fill the current gap in the Sony FE lineup of super-telephoto length lenses. One of our photo techs, Nick, tried the adapter with a Sony a7RII camera and a Sigma for Canon 120-300mm. We again found that the adapter could keep up with the potential of the lens and camera’s capabilities.

Note: Because we have not had the adapter for very long we cannot give a realistic failure rate or say for sure that it won’t have the same connectivity issues that the Metabones has. You know the ones: no electronic connection, “please clean contacts”, no irising, oops now your entire camera has shut down. But, we haven’t had any problems so far.

Can I Use My Canon Glass?

Sigma states that the adapter is only to be used with Sigma brand lenses, but out of curiosity I tested a few Canon lenses to see what the adapter would support. I took a handle full of popular lenses and put only one copy of each on the adapter so the results I got may be different from what may happen with someone else in another situation.

I found that autofocus worked on all of the AF lenses that I tried. The focus modes and focus points were limited though, and the camera would not go into flexible one-point focus to use any of the points on the outer edges of the frame. The AF speed was good, and face detection was active. The image stabilization also worked fine with all three relevant lenses. I also tried a tilt-shift lens in full tilt and shift positions to check for vignetting and all is good. One lens that did give problems was the Canon 50mm f/1.2. The metering was way off causing the images to be overexposed. After going back later with a different copy of the lens the metering was fine, but I did notice that the aperture only opened to F/1.3. Same deal with the Canon 85mm f/1.2. And checking the Canon 50mm f/1.8 I found it opened up to f/1.7.

Why would this be? We aren’t really sure. Siggy just being weird. But in short, we can’t recommend you try anything but Sigma lenses with this adapter.

If you are shooting with Sigma glass the answer is pretty clear that you would want to use the MC-11. You may even want to switch to Sigma glass just to use it. The build quality is better, it supports the full range of AF modes, and with limited use but a trust in the Sigma brand, this adapter will likely be more reliable.

What Could be Improved

The Sigma MC-11 is an exciting companion to the impressive Sigma Art Series lenses. The technology is great, and would be even more useful if made compatible with other brands. It’s built well, brings more lens options to E-mount users, and seems to work really well. I’m excited to see what future firmware updates bring, and for now this will be my choice adapter.