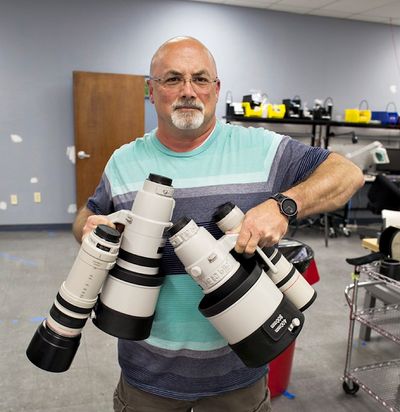 Some old picture or me carrying lenses, because the editor counts pictures in the articles but doesn't read the captions.

I get asked a lot about different telephoto lenses. Is the 400 DO II better than the 400 DO? Which is better, the Tamron 150-600mm or the Sigma 150-600mm? You’ve probably noticed that I don’t answer those questions. The reason is simple. Our optical bench is designed to test lenses up to 2.5kg weight and a maximum of 250mm focal length. Most super telephotos fall outside that range.

But, of course, we’ve spent most of the last 10 years figuring out how to do things we aren’t really supposed to be able to do. The truth is, with some reprogramming (like overwriting the expected focal length in the software), really careful technique (like a long delay for vibration dampening between each measurement after the machine moves), and a few other manipulations, we’ve found we can test most lenses at 400mm with good reproducibility.

Notice I said most. One lens you’ll see missing today is the Nikon 400mm f/2.8 VR II. Now I do expect that Nikon fans will claim a major conspiracy, but the truth is simpler: the first 400mm f/2.8 VR II is the heaviest super telephoto we tried. When we did, I thought there might be a bit of vibration-induced variance in the results so I don’t think they’re valid and don’t want to post them.

Now Swear the Solemn Oath! (Yes, you have to repeat it out loud.) I do solemnly swear that I understand the following.

Also, I promise not to ask Roger to repeat the tests at f/8, or 600mm, etc. because I realize the bank’s going to come take his machines away if he doesn’t start doing some stuff that generates revenue soon.

Very good, you are now members of the Delta Tau Chi optical testing fraternity.  You may now read on.

This is optically the best telephoto there is, and all other lenses are measured by how close they can come to this one. It should be the best, it’s very big and breathtakingly expensive. 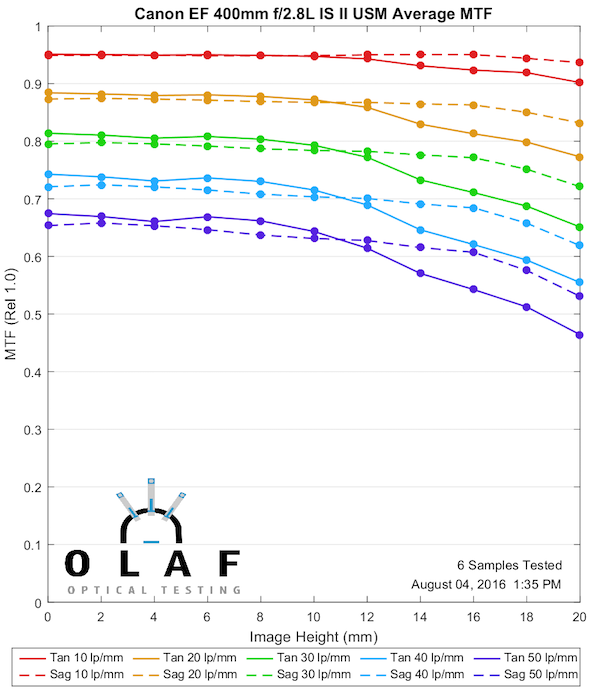 A lot of Canon shooters want to know how close they can get if they give up a stop of aperture and get the markedly less expensive and amazingly lighter 400mm DO II. The answer is at f/4, the 400mm DO IS II is basically as good, at least in the center 1/2 of the image where most telephoto subjects rest, as the 400mm f/2.8 IS II is at f/2.8. 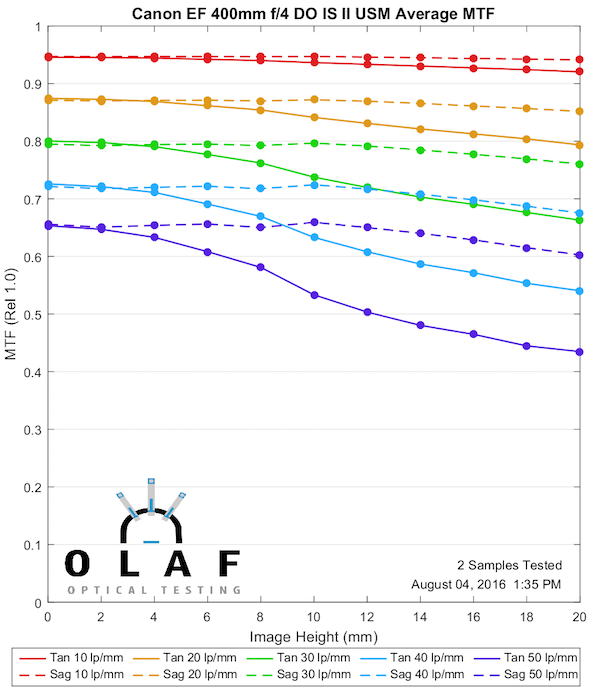 Let me emphasize that this is the DO II. The original isn’t quite as good as you can see below (The DO II is on the right). 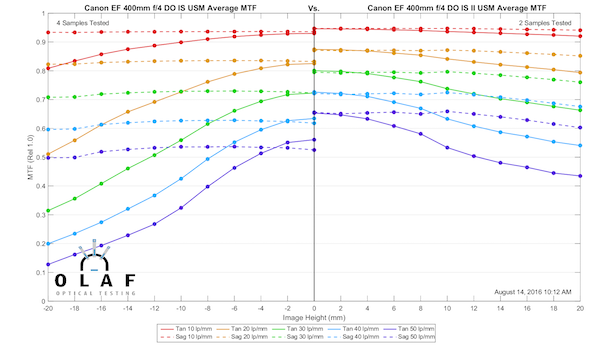 And while we’re answering questions Canon telephoto shooters ask all the time, let’s compare the 400mm DO IS II to the Canon 300mm f/2.8 IS II with a 1.4x Mk III teleconverter since these are both f/4, of similar size, and similar cost. The 300mm + 1.4X combination, is, of course, 420mm so it is a bit longer range. As you can see, the 400mm DO IS II is a little bit sharper than the Canon 300mm f/2.8L IS II with TC combination on the bench. In the real world, though, the 300mm with TC combination offers some other advantages (like being able to be a 300mm f/2.8 when you want) that may be more important than the MTF curves. As an aside, we experimented a fair amount with the 300mm f/2.8 and 1.4x combos. First using the same lens with different converters, then using the same converter with different lenses. The converters don’t vary as much as the lenses, which makes sense; they’re optically much simpler than the 300 f/2.8 lenses.

OK, the vast majority of us aren’t interested in a $10,000 lens that requires a heavy duty tripod to use effectively. That is a specialist’s tool. We are more interested in that zoom or prime lens that can get us to 400mm at a fairly reasonable price. I understand you’re also interested these days in the third-party lenses that do that and we’ll get to those next. But it’s important to look at your brand’s offerings first, so you have that comparison point. (Spoiler alert: If you shoot Canon you’ll probably love the 100-400 IS II; if you shoot Nikon you probably won’t love the 80-400 VR II).

The Canon 100-400mm f/4.5-5.6 IS II is generally considered one of the best telezooms on the market and it’s MTF curves tend to support that idea. Remember, though, with the zooms we’re looking at them at f/5.6 at 400mm. That’s two full stops less aperture than the 400mm f/2.8 we started with. But the Canon is excellent at 400mm as you can see. And just because I wanted to know, we tested the old, but excellent Canon 400mm f/5.6 L prime lens, for comparison. Few people shoot it anymore, but there’s a reason it’s remained in production for decades. It’s not quite as good as the 100-400 IS L, but still, an excellent performer considering how old the design is. (In the lab. In the field I’ll take the IS every time). Commonly called the 80-400 VR II, this lens has been the Nikon 400mm zoom for some time now. It’s, well, it’s better up to about 300mm, but it’s just not that good when you stretch it out to 400mm. Not a great performance for a lens that demands a premium price. 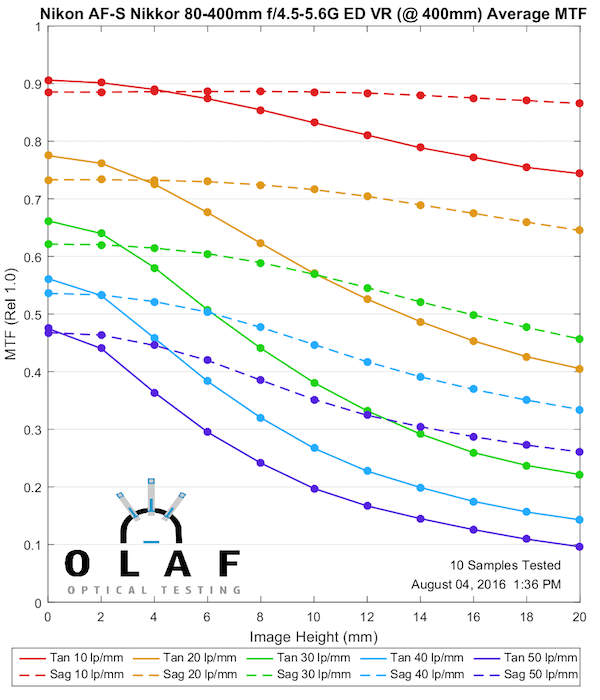 The newer Nikon telezoom is something of a different beast. It’s a fixed aperture lens and it zooms out to 500mm, so it’s the first lens in this test that can actually go past 400mm. Plus it’s a lot less expensive than the older 80-400mm. I can’t comment on how it performs in the field, but from an MTF standpoint, it outperforms its much more expensive brother at 400mm. 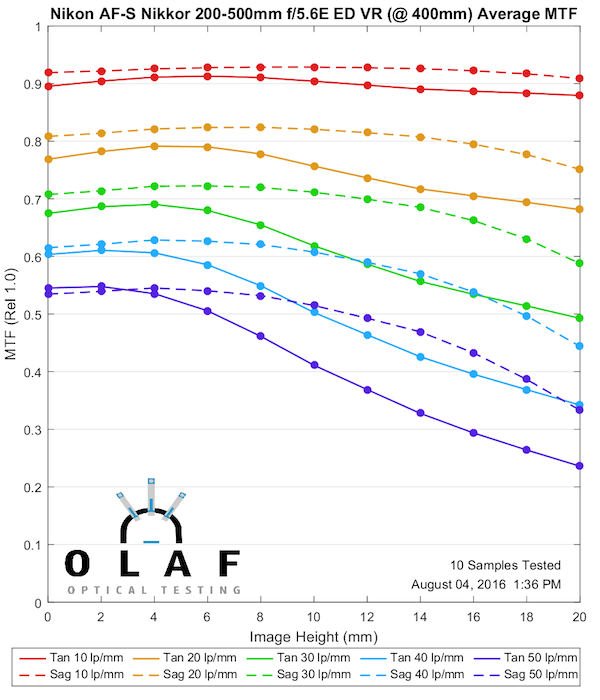 These recent entries in the super telephoto zoom market have changed things quite a bit. The Sigma Contemporary and Tamron lenses both can be had for under $1,000; much cheaper than the brand-name zooms. The Sigma Sport is a different lens, being almost 50% heavier and about twice the price of the other two.

There is one HUGE, IMPORTANT thing I want you to take away from the MTF curves on these lenses. At 400mm the two Sigma lenses are at f/6.3 maximum aperture, the Tamron is at f/5.6. Now I don’t think that half stop is going to affect your shooting significantly, but it probably will have some effect on MTF curves. The Tamron, Canon, and Nikon zooms we tested above are all done at f/5.6 and should each be at least a little better MTF stopped down. And yes, I know you wish I’d tested them all at f/6.3 to even the playing field. But I’ve got paying customers waiting and bills to pay.

Just in case you missed it, the Tamron testing aperture is f/5.6 at 400mm, so we can directly compare it to the Canon and Nikon telezooms above. 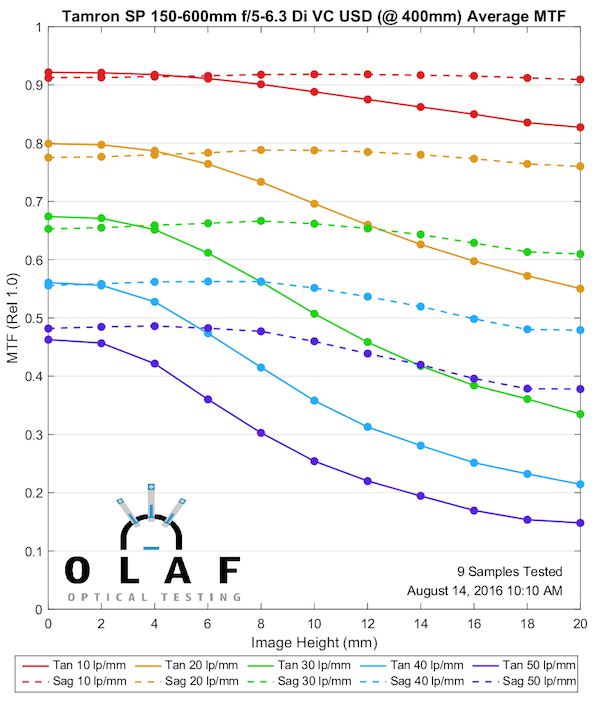 If you make that comparison, you’ll see why, for quite a while now, I’ve recommended this lens to Nikon shooters instead of the Nikon 80-400mm VR II; its similar in sharpness, far less expensive, and has additional range. But at the same time, I’ve told Canon shooters if they want the sharpest zoom at 400mm, to stick with the Canon 100-400. Obviously, if they want 600mm range, then my suggestions are quite different.

The Sigma Contemporary is very similar to the Tamron in size, price, and obviously, range. 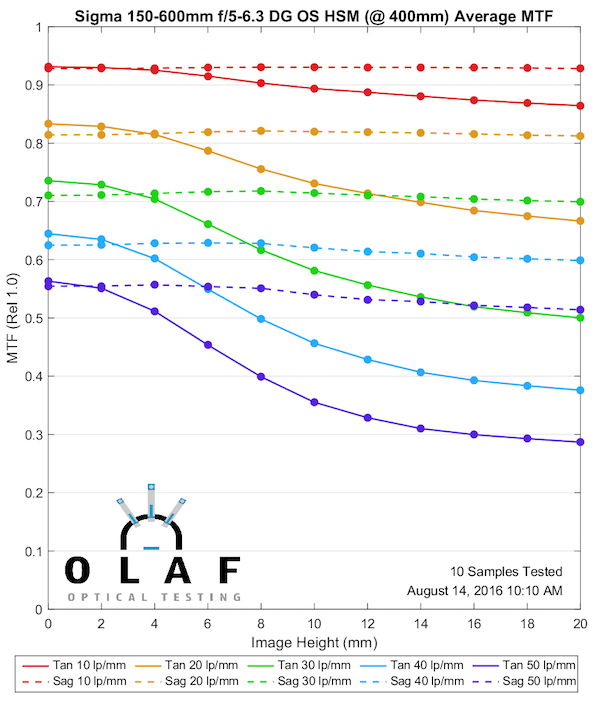 You can probably tell the Sigma has a slightly better MTF, but I’ll put them side-by-side below for easier comparison. I suspect that even if we stopped the Tamron down to f/6.3 the Sigma would be slightly better in the lab, but I also doubt the difference is nearly as great as the copy-to-copy variation. In other words, I wouldn’t consider MTF to be a significant factor when deciding between these two lenses. Things like how it handles, focuses, and how well the stabilization works are going to be way more important. 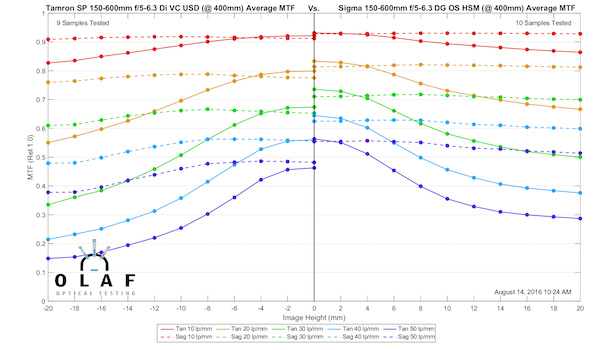 As I’ve mentioned, despite the similar names this is a very different lens than the Sigma Contemporary. One of those differences is weight and size. It’s the second heaviest lens we tested; only the Canon 400mm f/2.8 weighs more. But the Sigma Sport differs in that a lot of its weight is in a very heavy front element that sits at the end of an extending zoom barrel, which for purposes of testing at 400mm is partially extended. When we tested it, slight vibrations interfered with testing enough that we had several bad readings for each lens. For that reason, much as I wanted to compare the Sigma Sport to the Sigma Contemporary, I just don’t have enough faith in the results to make them public.

I don’t think we really did too much here today except to have some fun and confirm, in numbers, what most people already know. The 400mm f/2.8 lenses, if you can afford one and don’t mind carrying it, are amazing. Canon’s new 400mm f/4 DO IS II is also superb, at least as good as the 300mm f/2.8 IS II with a teleconverter.

Geek Note: Some of you may have noticed the two Nikon lenses seem to have astigmatism right in the center, which is, to say the least, unusual. This is one of the things that has more to do with our testing than reality. Remember we test the lenses rotating them so we take 4 slices to get a complete picture of the lens. With these heavy, extending barrel zooms, the barrel tilts a bit with extending, so the center doesn’t quite stay in the center, it’s a few mm off center in some rotations. Here’s a random 80-400 as an example, showing you all 4 quadrants of MTF. You can see that the best center is the 45-degree rotation, but at other rotations, the best reading is slightly off-center. We can have a geek argument that maybe we should recenter at each rotation; it would make prettier MTF curves. My thought was nope because the whole purpose of the 4 rotations is to look at the different areas of the lens at the same position, just like it would be in an image. Besides, this is the way we’ve always done it. But let me add that that is NOT the way the manufacturers would do it. They show you a single cut, so, in this case, our 45-degree cut should be closest to the manufacturer’s ideal.