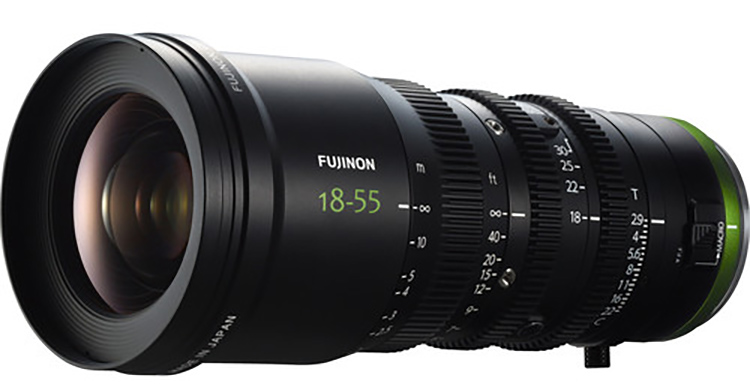 Fujinon, typically a manufacturer of high-end, ENG style PL and B4 mount lenses, officially announced today that they are releasing their first cine-zooms designed specifically for Sony’s E-mount camera systems. The MK18-55 T2.9 and the MK 50-135 T2.9 are meant to be affordable, lightweight solutions for video shooters looking for a middle ground between the typical lensing strategies on cameras like the Sony FS5 and Sony FS7. Right now, there are two basic paths you can take when it comes to picking out zoom lenses for these cameras: 1.) Something like Canon’s 17-120 that will give you cinema-focused design and performance but that’s cumbersome, expensive, and requires an adapter or 2.) Still photography lenses that are affordable and lightweight but aren’t designed for video work and, if they’re manufactured by anyone but Sony, also require an adapter. Fujinon’s intention with these new E-mount lenses is to offer a solution that combines the best of both worlds. They sent us a copy of the Fujinon MK 18-55mm T2.9 to see what we thought.

Before I get into our impressions of the lens, though, I’d like to talk a little bit about what we expect out of cine-zooms in general. These lenses should have (and are in many ways defined by) design elements that improve their functionality for video work. For one, constant aperture allows you to zoom in on your shot without having to worry about your exposure changing. Additionally, the lens must be parfocal, so that you’re not losing your focus as you zoom in and out of the frame. Minimized focus breathing is required to ensure your frame is consistent during focus changes, and a dozen other design choices need to be carefully considered to make this gear more appropriate for video over stills – this all of them involving a sacrifice to weight and affordability.

Fujinon’s MK18-55 T2.9, then, is an exercise in the art of compromise. The engineers who designed this lens had to make countless choices and concessions along the way. It could be a little faster, sure, or cover a full-frame sensor, but that would make the lens heavier and more expensive. Same deal with the focal length range. In a perfect world, it would be great to have, say, an 18-100, but that would come at the cost of either a varying aperture or a much larger, much pricier lens. Every spec and feature on this lens was a carefully-considered choice and, in our experience, it seems like every choice was the correct one. The 18-55 is parfocal; it has standard 0.8m pitched gear rings, a 200-degree focus throw, a constant aperture, and no noticeable focus breathing. Fujinon even included features like macro focus, a fully-closeable iris, and flange focal distance adjustment, things that are often missing from higher-end cinema zooms. Though the 18-55 was the only one we were able to test, Fujinon says that the 50-135 is engineered to the same standard. Both lenses also share the same dimensions down to the position of the zoom, focus, and iris rings, meaning that it will be easy to swap between the two on larger rigs quickly. It’s pretty unbelievable to find this level performance at this weight and price point.

To put it in a little context, the Fujinon MK18-55mm T2.9 weighs slightly over two pounds, which is about the same as a Canon 24-70mm f/2.8L with a Metabones EF to E adapter; light enough that it’s usable without 15mm rods and a lens support. Price-wise, the 18-55 is $3,800 new, which is around $1,600 more than a Metabones adapter and a 24-70 f/2.8. $1,600 is not a negligible amount of money if you’re purchasing these items new, but we’re a rental house, and that cost difference becomes pretty minor when you’re looking at rental pricing. The product page for the 18-55 isn’t finalized yet, but, for a 7-day rental, we’d expect the 18-55 to be about $10 per day more expensive than a combined Canon 24-70mm f/2.8L II and Metabones adapter. That’s an affordable difference, and, based on the performance of the lens and stability of a manual iris, we’d recommend the Fujinon MK18-55mm T2.9 every time.

None of these engineering marvels really mean much, though, if the lens isn’t up to snuff optically, so Aaron and Roger put our sample copy through its paces. Below are the resulting MTF charts and their first impressions: 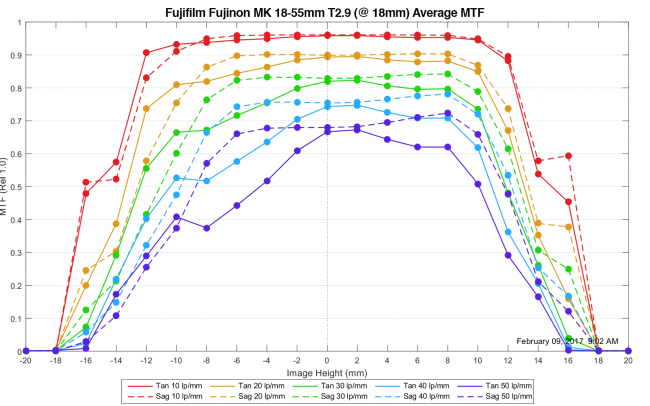 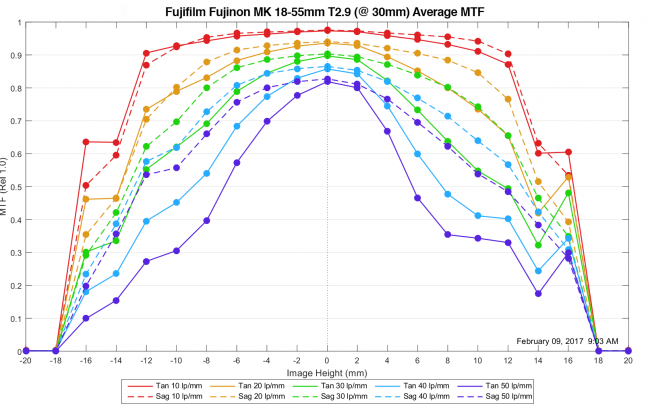 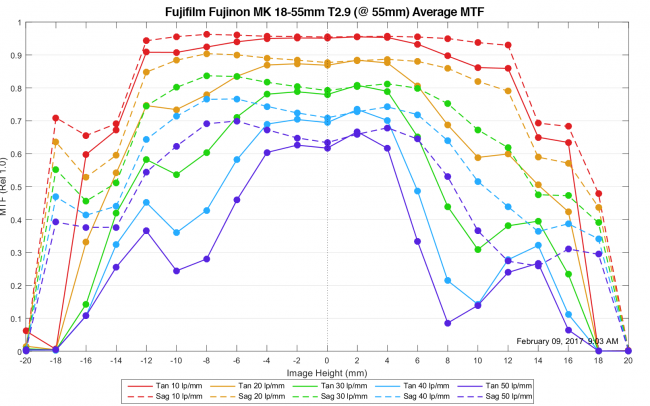 “Those who are familiar with our usual tests should know that we don’t like publishing MTF results from single copies. We see far too much copy-to-copy variation to state our expectations for a given lens until at least ten or so have been thoroughly tested for comparison. So, take these results with a grain of salt, for now. As usual, these were made with the iris wide open and at four rotations, then averaged. Also, note this lens is not meant to cover the full 40mm field indicated. That being said, seeing that this copy was a prototype and it was the only copy we had, we feel it is reasonably safe to say that wherever Fuji chose to compromise, they have done so most gracefully. In many ways it resembles what we find more in photo lenses than high-end cine lenses, having a bit more tilt variation from one end of the zoom to the other. This is where the apparent discrepancy in astigmatism off-axis comes from in the averages shown. However in overall numbers, especially on-axis, it is quite comparable to more expensive options. I won’t use the Zed word, but well…more expensive options.”

So, long story short, based on our collective experience, it looks like Fujinon really nailed it with this MK line. We’ll keep you informed once the Fujinon 50-135mm is released and we’re able to get more copies in, but for now, we’re at least comfortable saying that these lenses are extremely promising. We expect to stock and rent a lot of them. As always, if you have any questions, feel free to leave them in the comments or give us a call at 901-754-9100. To give you an idea of what the Fujinon 18-55mm looks like in practice (and for your experimental entertainment), here’s a short by one of our employees, Stephen Hildreth, shot with the Fujinon MK18-55mm T2.9 and Sony PXW-FS5.

Tweet
Posted in Equipment
The Biggest Photography and Videography Announcements So Far for 2017
Lens Teardown of the Complicated Sony FE 70-200mm f/2.8 GM OSS: Part I