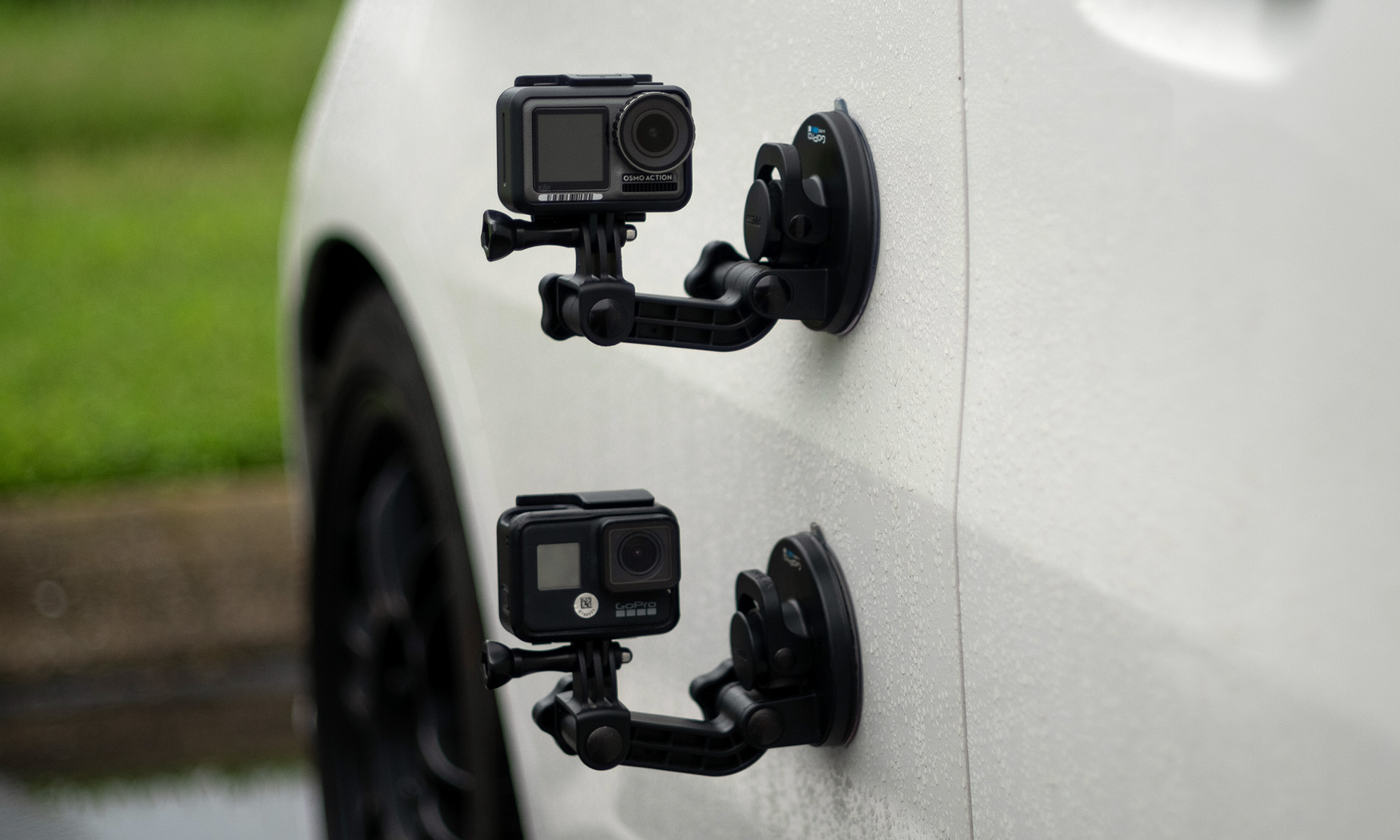 GoPro cameras have been a staple in bags of various photographers and videographers around the world. They’re almost ubiquitous in action genres at this point. They’re small, sturdy, and have decent image quality for their size. GoPro carved out a niche for itself in the late 2000s with the introduction of their digital cameras in a similar form factor that we’re used to. There have been a few competitors that have popped up to try and compete with GoPro, but nothing has taken off. Enter DJI. DJI is the self-proclaimed world leader in civilian drones, and it makes sense for them to bring their technology to the action camera market. So let’s take a look at some of the key differences between the DJI Action and the GoPro HERO7.

On paper, they match up pretty well. They both have a 1 / 2.3” sensor, digital image stabilization, similar shooting modes, smartphone apps, 4K footage, etc. But there are a few differences that are worth noting. So I wanted to use those differences as an opportunity to look at the two action cameras, and get a better sense of which one is the best of the two. While GoPro has a much longer history in the field of Action cameras, DJI has quickly become the number one brand for steadycam and drone technology.

Upon looking at the two systems, you’ll see that they share a very similar design and form factor. However, one of the most notable differences out of the box is the screen size. The screen on the DJI Osmo Action is a bit larger with better resolution and also has a front screen, which is particularly handy when it comes to framing. The screen on the Osmo Action is 2.25” vs. the 2” screen on the GoPro Hero7. While that doesn’t sound like much, it’s quite a bit when you need to cram as many functions into a touch screen as these cameras have now. I found the Action’s screen significantly more responsive too. It is newer though, so I’m sure that has something to do with it. The front display on the action is a bit handier than the screen on the Hero7 that only shows settings. At least with the Action, you can frame your shot a bit easier. The screen is tiny though, so I wouldn’t hope to use it for anything more than framing. Overall, I just found the Action a lot easier to use.

The external layout and materials are a little bit different between them. The Action uses a far more rugged feeling plastic than the rubbery material we’ve all come to know from GoPro. The Action utilizes a battery with weather sealing as opposed to the GoPro style that has a door that closes behind the battery to seal the camera. The GoPro HERO7 has the memory card, and battery in the same area behind the door, whereas the Action keeps the USB-C and memory cards hidden away together. 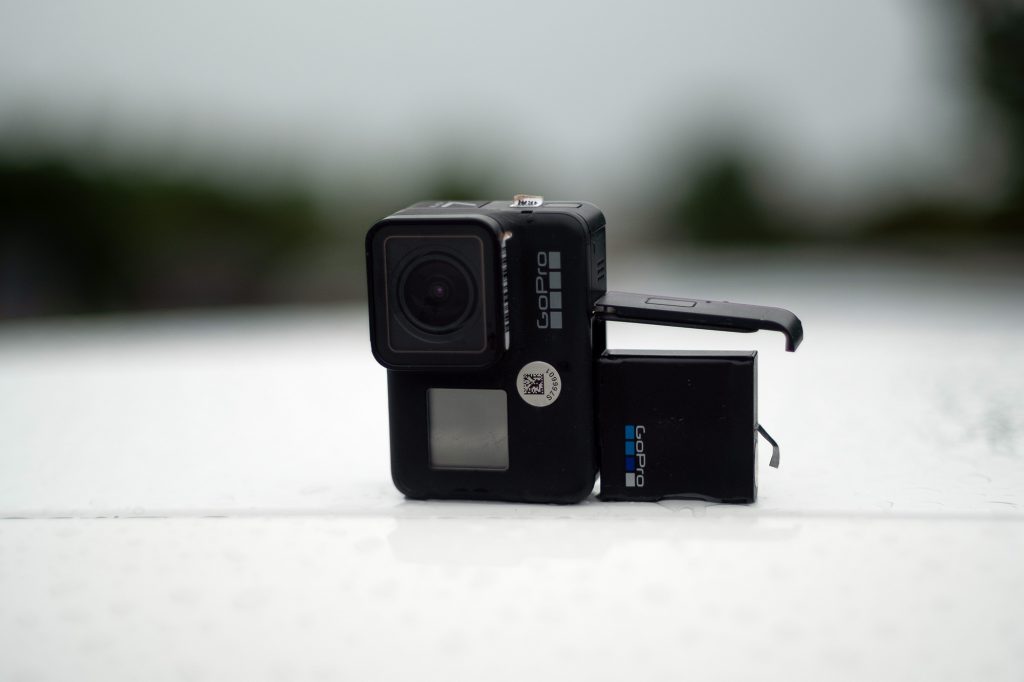 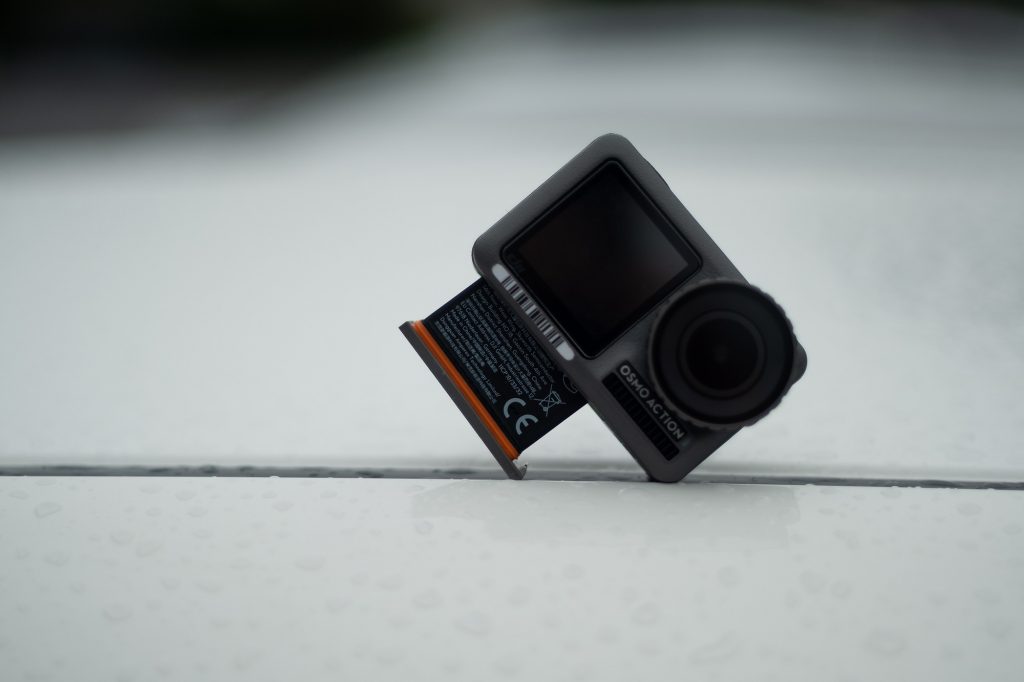 The GoPro HERO7 has some unique features that help set it apart from the DJI Osmo Action. For example, live streaming and GPS tracking are both features exclusive to the GoPro HERO7, allowing you to map out where you walked/ran/drove and how fast you went. You can also quickly do overlays with the GoPro footage in post-production with this information. These aren’t functions that *everyone* will use, but they’re useful if you’re using the camera for racing, action sports, or if you like geotagging your locations. There’s also the streaming capability found on the Hero7 to stream directly to Facebook Live if that’s your thing.

I’ll be honest; when I took the two of these cameras out to play with for the weekend, I wasn’t going out trying to make something amazing. I was almost totally in the dark about action cameras but recently found a use for them and wanted to see how they worked. Some of my thoughts on the Osmo Action when I took it out of the case were that it feels a bit heftier than the Hero7. The casing itself is made of a durable plastic material that feels about as premium and tough as plastic can feel. The Hero7 feels fine, but the material is kind of like a semi-smooth rubbery material that I didn’t like as much. The screen seemed a lot brighter, higher resolution, and the touch screen responsiveness on the Action was *really* good compared to the Hero7’s that seemed dim and more like a first-generation touch screen. I liked that the battery is separate from everything else on the Action. The battery requires you to unlock one switch, and then you have to slide another one to release the battery. The battery has a thick o-ring gasket around to keep water out. The USB-C and memory card slot are both in the same (sealed) area. One thing worth noting was that it was tough to get a microSD card out of the Action. I needed a pen to click the memory card in and out, which bugged me. The Hero7 was a lot easier to get the memory card in and out.

Moving on to the apps is where GoPro Hero7 started to lose some points. It was just buggy all the time and would randomly exit out and had a spotty connection. The DJI Mimo app that works with both the DJI Osmo Action and the DJI Pocket Osmo was polished and smooth. Functionally the apps do similar things, but the DJI app just worked better overall. Playback seemed more fluid, and it was just more user-friendly than the GoPro app. It was nice being able to mount the cameras where I wanted them and use the apps to connect only to make sure everything was looking the way I wanted it.

In use, the Action started up significantly faster than the GoPro and went from “idle” to “awake” quicker too. The GoPro HERO7 only has two buttons to control three functions. The record button is by itself, but you can also switch modes and turn the camera off with the same one which in theory sounds fine, but I (and other GoPro users) have had issues where the camera just doesn’t turn all the way off, then you end up switching modes when you don’t want to and turning it back and then trying to turn it off again. It’s a vicious cycle. The Action has three buttons to change the same three functions, which worked a lot better.

We’re all here for the footage, though. They both shoot 4K at 60fps and even Full HD down to 240fps for the slowest of slo-mo. They both feature their own form of electronic image stabilization with a few caveats. With the Action, you can’t use HDR mode when you have Rocksteady enabled so our advice would be to use HDR mode when you’ve got the Action on a stable platform. The video above does a great job of illustrating the minute differences between them. One big difference between them is that the Action crops about 19% of the image when using Rocksteady vs the Hero7 that crops in only about 10%. Hopefully, this is something that DJI can work on for the next model to take more advantage of better electronic image stabilization processing.

Everything else on paper is identical or remarkably similar. GoPro is known for its punchy colors and contrast, and the Hero7 continues with that. The DJI Osmo Action has lower contrast across the board. Both cameras offer cine-like presets to aid in matching your action camera footage to anything else you might be using. Audio is about what we’ve all come to expect from action cameras, good but not great.

Initial thoughts:
DJI Mimo app is laid out a lot better, works smoother, and easier to navigate.
Osmo Action feels a lot better.
Osmo Action screen is significantly better with better responsiveness.
I like the battery style of the Action better.
The GoPro memory card slot is easier to load and unload.
GoPro is a lot more finicky in general.
I hate that you don’t have other picture profiles in the GoPro. The cine option on the Action is nice.

What I liked about the DJI Osmo Action:

What I didn’t like about the DJI Osmo Action:

What I liked about the GoPro Hero7:

Overall, they’re pretty equal competitors with some decent trade-offs for each other. Now that GoPro has released their Hero8 that fixes some of what people have complained about, we look forward to seeing what DJI does to push the boundaries of what is possible with this next round of action cameras. People love these little cameras, and we don’t see that changing soon, especially as their quality and usefulness improves with each generation.