How to Not Check for Ghosts in Equipment 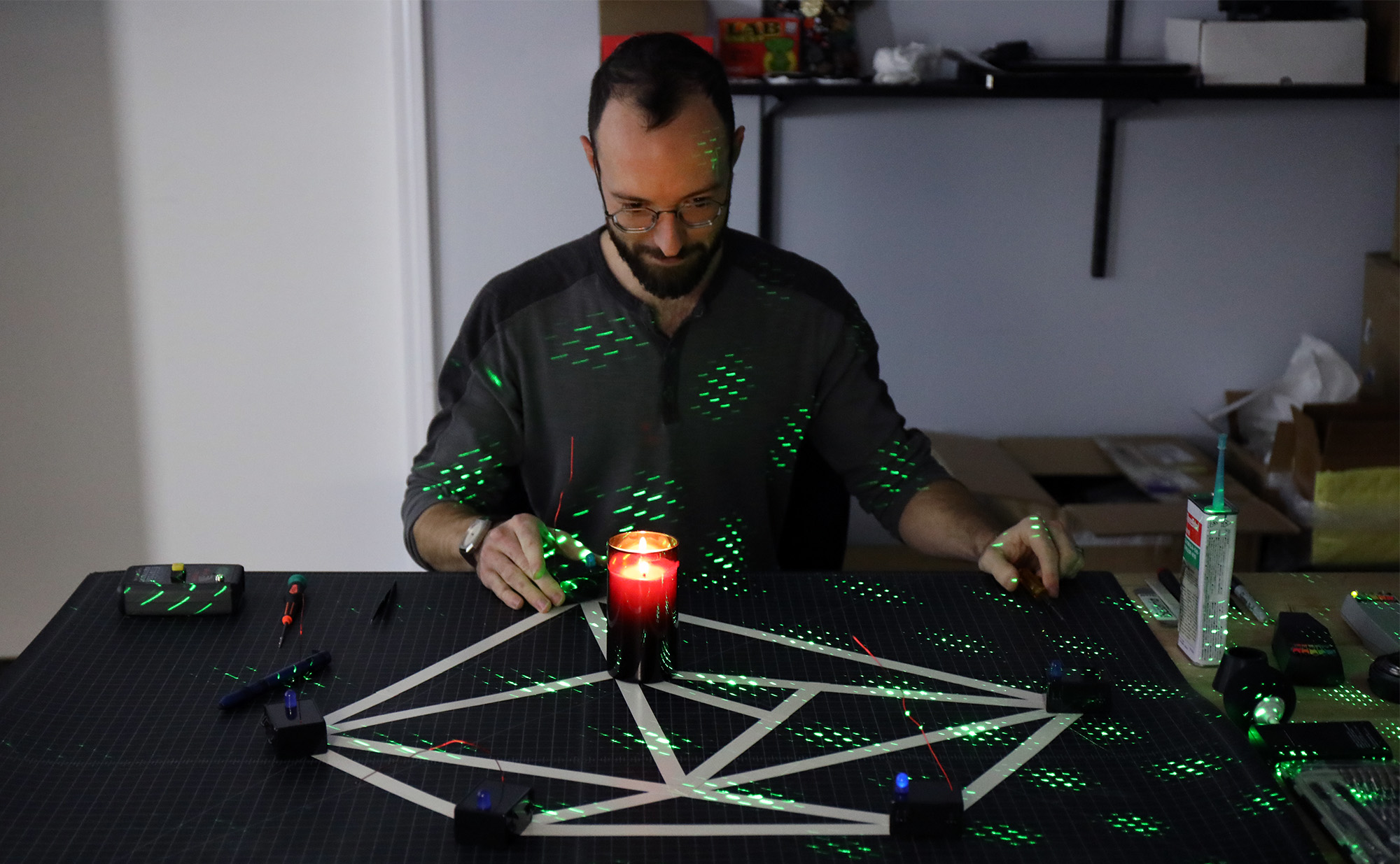 Someone remarked the other day that sometimes our equipment gets used in the recording of the various “Find the Ghost” or Check-Out-This-Haunted house TV shows. Someone else became concerned that if our gear was exposed like this, maybe some of it came back haunted or contaminated by malevolent spirits. Aaron and I, since we develop all the quality assurance tests for Lensrentals, realized we’d probably better start a protocol to make sure none of our equipment was haunted or infected by malevolent energy.

I took on the background research myself. First was deciding what testing equipment we should use. I’m not actually trained in paranormal stuff, but luckily the internet is just FULL of people who are.  Even more luckily most of those people are willing to sell the ghost detecting gadgets they’ve developed through years of careful research. Within a few days, and at the cost of just a few hundred dollars, I had all manner of ghost detecting equipment delivered. 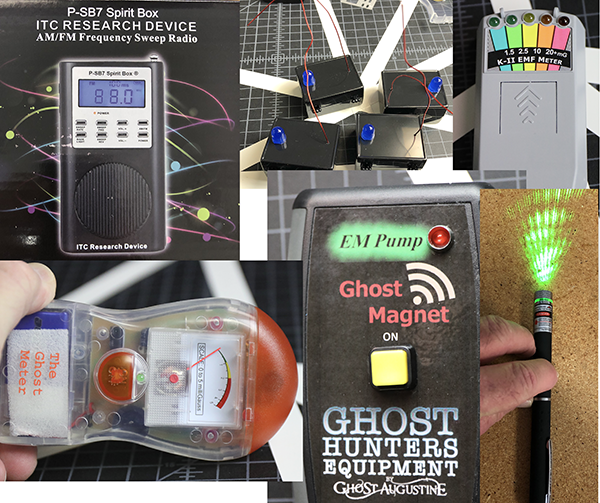 Setting up for Testing

As I mentioned, we are not wise in the ways of ghost hunting, but I continued my research in a strip mall that boasted a Hot Yoga studio, a Tarot Card reader, an Essential Oils store, and a Vegan coffee shop. As you would expect, I was able to find all manner of experienced ghost hunters there. I was told we probably needed a Pentagram just in case there was demonic possession involved, and that these things were best done by candlelight.

I left Aaron to set up an appropriate workspace and came back to find this gaffer-taped monstrosity. Aaron’s explanation was that he thought, given we were working with camera gear, it should be a pentaprism rather than a pentagram. And since ghosts could be trapped in a lens, the pentaprism should be distorted by field curvature, astigmatism, flare, and coma so that potential demons inside lenses would recognize it. I can’t argue with that kind of logic. 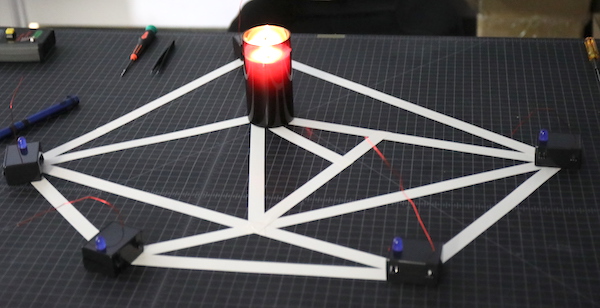 We turned down the lights and burned a candle in the center for a while, cause that just seemed like the traditional thing to do. But being modern scientists, we also shined that laser grid pen up in there to check for the aforementioned visual disturbances, and because it looked way cooler. I honestly can’t tell you if there were visual disturbances or not but I figure that should scare any spirit energy out of the area. 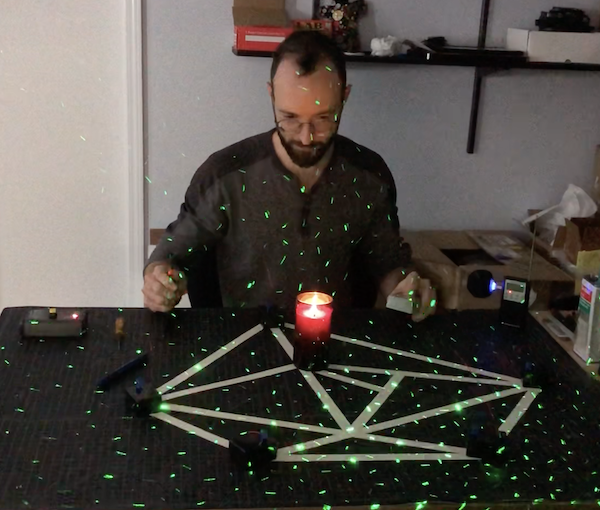 As you can almost tell from the above shots, we had placed a Nightfire Ghost Detector at each corner of the whatever-it-is-Aaron-made. (After looking at it a while, I think it’s a pentaprism with an SLR mirror-sub mirror assembly overlay. But I suspect I’m the only one seeing that, so never mind. This ghost stuff may be creeping me out.)

Having made certain the working space was now clear of malevolent spirits, we turned on our EVP detector and Aaron brought each piece of equipment to be checked into the space over the ring of Ghost Detectors. As you can see, this Sennheiser microphone set off the blue lights on the Ghost Detectors. Clearly we started this work just in time. (As an aside, we also found the office microwave is haunted; even across the room it set everything off. Luckily the coffee maker is cool.) 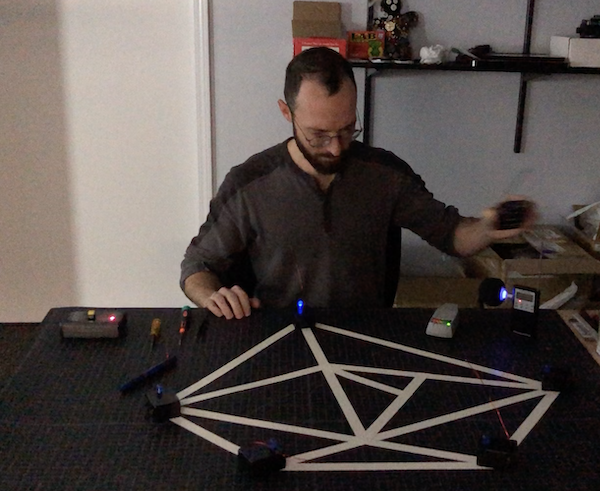 Keeping this at the highest scientific standards, of course, we confirmed the equipment was actually haunted using the EMF detector. You can see both Ghost Detector and EMF detector agree there’s a ghost in this machine. 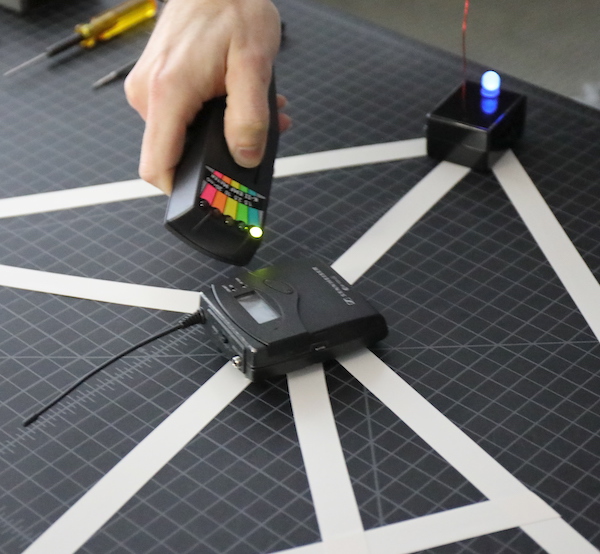 Aaron then activated the Ghost Magnet to pull the malevolent spirit out of the Sennheiser. 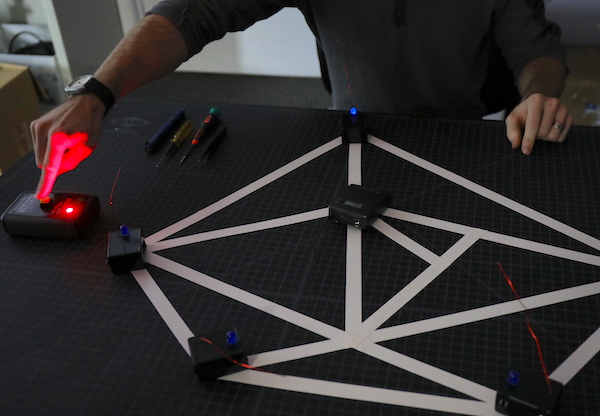 Unfortunately, as so often happens when you’re doing science, things didn’t go quite as planned. None of us had really considered what would happen after the spirit left the astigmatic-curved-pentaprism-of-containment. 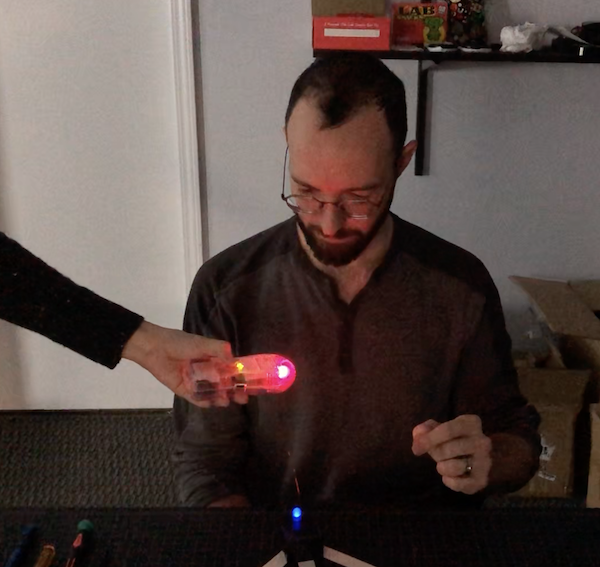 At this point, we weren’t certain what the proper course of action was. Sarah thought we needed to perform an exorcism on Aaron. I thought since he already had one spirit inside him, we should run through the rest of the equipment first. I mean is multiple possession really worse than uni-possession? Aaron said this was all BS and we should just stop. Of course, if he WAS possessed and facing an exorcism, that’s exactly what you’d expect him to say. This kind of conundrum is what makes science so hard.

Speaking of making science hard, I have to admit we did sloppy controls by not checking Aaron for possession before we started this. It was quite possible he’d already been possessed because he eats food cooked in that haunted microwave every day.

Anyway, since we were a little leery about aggravating any possible demons inside Aaron, we decided it was best to play along and let him try to prove this wasn’t real by disassembling the ghost detecting equipment and see if it looked legit. Of course, I already had it on best-internet-authority that this stuff was top-notch ghost hunting equipment, but I played along to humor him (or it).

This is pretty simple, pop off the blue LED cover, open the case, pull out the circuit board and attached antenna. 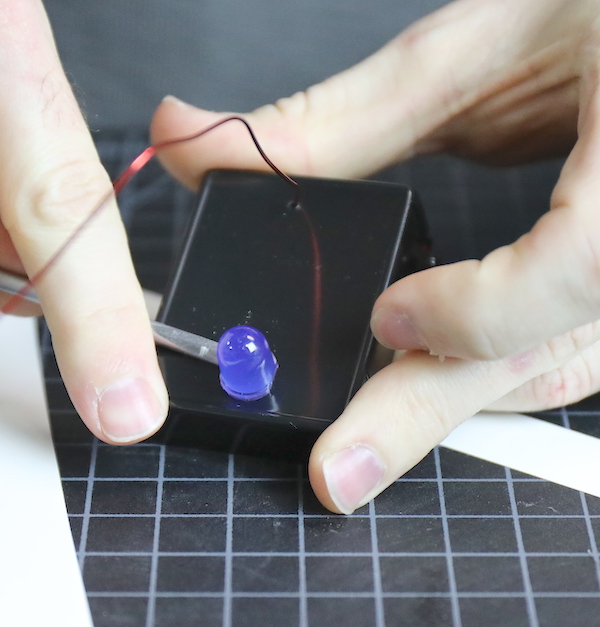 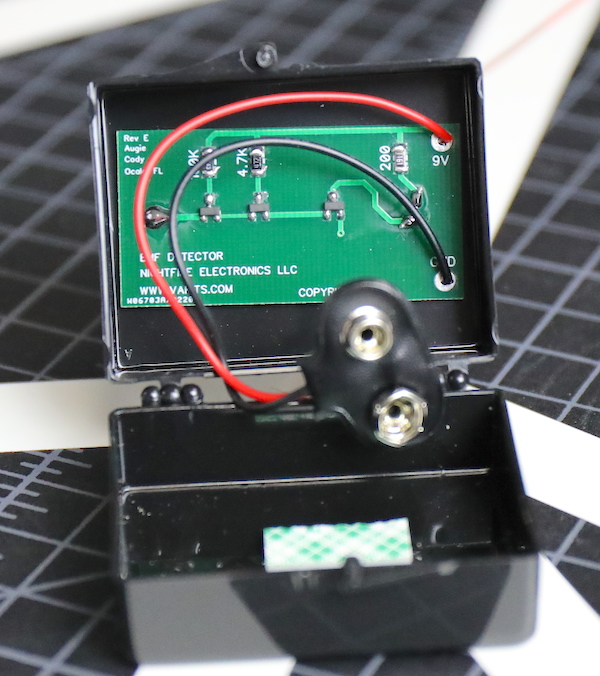 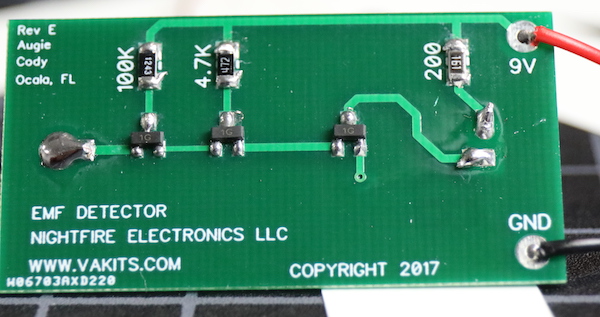 Looking pretty much like a couple of resistors wired to an LED, one would think, perhaps, this is not the most sensitive ghost detector in our armamentarium. And we have to admit further experimentation showed that about anything would light this up: cell phone ringing a few feet away, hands moving near it, the aforementioned microwave across the room, the air conditioner turning on.

We had more hope here, this was a bit pricier piece of kit and came with a warning to ‘not buy inexpensive Chinese counterfeit versions’. Two screws open up the case and let us take the circuit board out. It’s certainly a little more interesting than the Ghostmeter board, with all manner of capacitors and such, not to mention 5 different color LEDs. 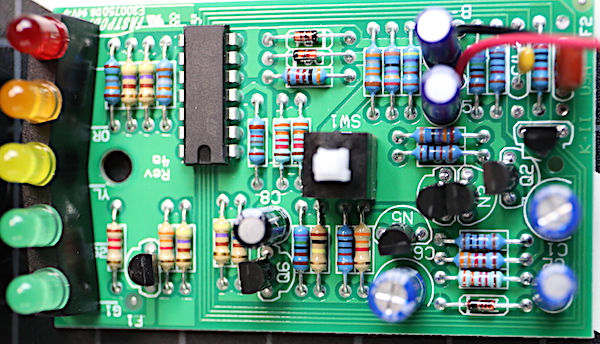 The larger chip you see is a Texas Instruments LM324N 4 channel amplifier that costs $0.28 each in quantity making this probably the most expensive and high-tech of these devices. We were sort of semi-impressed with this until we opened up the other one (we had accidentally purchased two in our initial enthusiasm) and found that while the board was the same, the capacitors were different both in voltage and capacity. 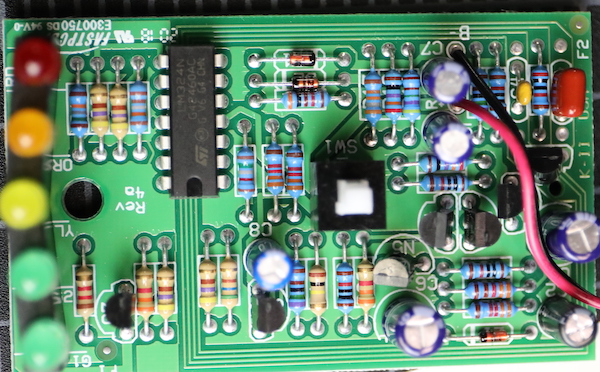 This might explain why we saw one meter go multi-light crazy much easier than the other even when they were side-by-side. I’ll also note that I’m not wise in the ways of electronic engineering, but a scientific EMF meter (which costs a few hundred dollars) has a pretty unmistakable three-direction antenna, for, like sensing the direction of the EMF field. These $40 devices don’t have any antenna. I’d think knowing which direction the ghost is coming from would be a useful thing. Sarah said maybe ghost energy isn’t directional or something, but on the ghost shows their always yelling “Look! Over there!” so I’m pretty certain there’s direction involved.

If these things are used to detect Bigfoot though, I’d insist on some directional input. Bigfoot is pretty scary, you’d want to know which way he was coming from.

I had some hope left for this device since it was in clear plastic, which I thought might mean “We want you to see our complex electronics”. Plus that orangey thing at the top might be covering the aforementioned three-directional EMF antenna. Not to mention, it was this device that confirmed Aaron was possessed.

This one does get the nicest case award, held together with multiple screws as well as edge clips. But once taken apart that orange cap covered, well, ghost storage space, perhaps. 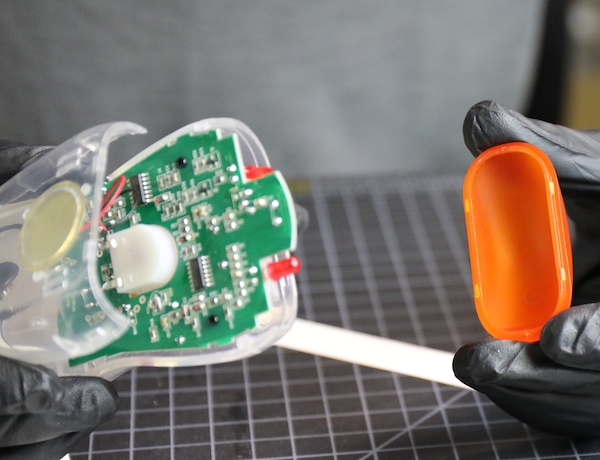 The circuit board though, is nicely laid out, with an analog meter, a couple of LEDs that flash, and a speaker that puts out a tone when it senses EMF. No directional antenna though. And with further testing either every human in the office is possessed, or it just senses humans. And microwaves.

Well, I was really interested in what this thing did to attract ghosts. It says it’s an EMF pump, but I’m not sure what that means. When we turned it on though, the red light was pretty bright and it made a kind of ominous humming noise. When we opened it up, though, it had a battery, wired to a light and something that looked like a motor glued to the top of the case. 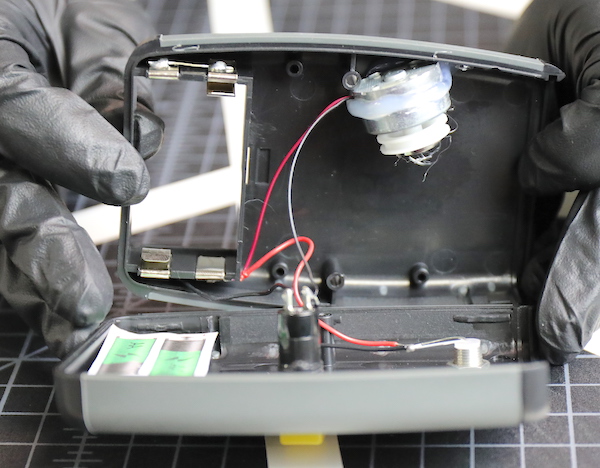 Not certain what this was, we removed the glue, put batteries back in, and turned it on. 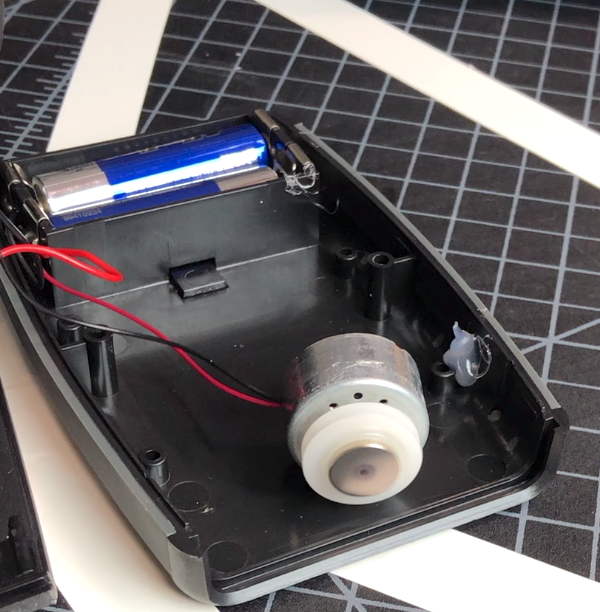 Turns out it’s a fairly high-frequency piezo-vibration motor. As I’ve said before, I’m no expert on ghost hunting, so I have no idea why ghosts would be attracted to vibrators. I would have thought they were past that kind of thing. After this, I had to agree with Aaron that it seemed unlikely this device had really pulled a ghost out of the haunted microphone.

Not a damn thing, really. Well, except if you believe in this stuff, then what ghosts are attracted to are things with high-frequency vibrating motors. Do with that information what you will.

Oh, and that Lensrentals goes to every length possible to assure our testing is the best in the country. Can you tell me one other rental house that checks for haunted equipment? I thought not.