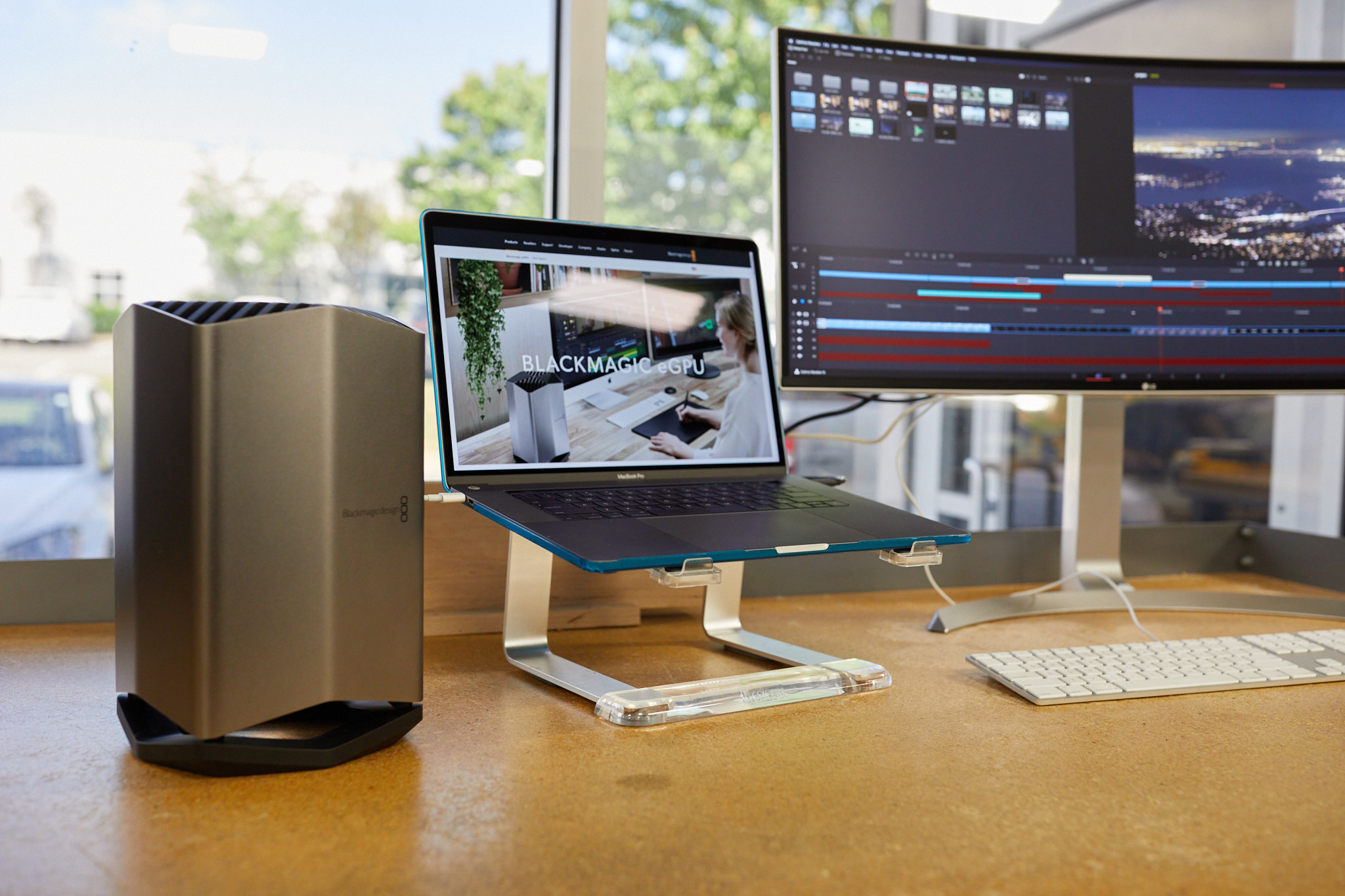 For the kind of stuff I do, a computer has to accomplish a type of balancing act. I need something portable if I’m traveling for work, shooting in the field, or just want to set up shop somewhere other than my office. But it also has to be powerful enough to handle occasional intense tasks like photo editing, motion graphics, or video processing. Luckily, Lensrentals provided me with what I think is a great work laptop for my needs, a 15-inch MacBook Pro. It’s got a 2.6 GHz Quad-Core Intel Core i7 processor, 16 GB of LPDDR3 RAM, and an internal AMD Radeon Pro 450 GPU with 2 GB of VRAM. While those might not be the most impressive specs in the world, it’s more than capable of taking care of 75% of my work tasks, which are primarily word processing and posting gifs in Slack. And, considering all of Lesnrentals’ 150 or so employees are also provided with work laptops, it’s about as good as I could hope for given how many we have to buy.

The only time I notice any trouble is with that GPU. My particular model MacBook was released sometime in 2016, and the graphics specs were pretty unimpressive even then. Now it can handle basic photo and HD video editing just fine. Still, it lags noticeably with higher resolution video and isn’t much use for motion graphic or color correction work. Again, while most of what I do at work could probably be accomplished with a cell phone, I do sometimes need to, say, figure out a good proxy workflow for 8K RED footage or color correct 1000fps test shots from a Phantom VEO. That’s when I place an order for a Blackmagic eGPU Pro. 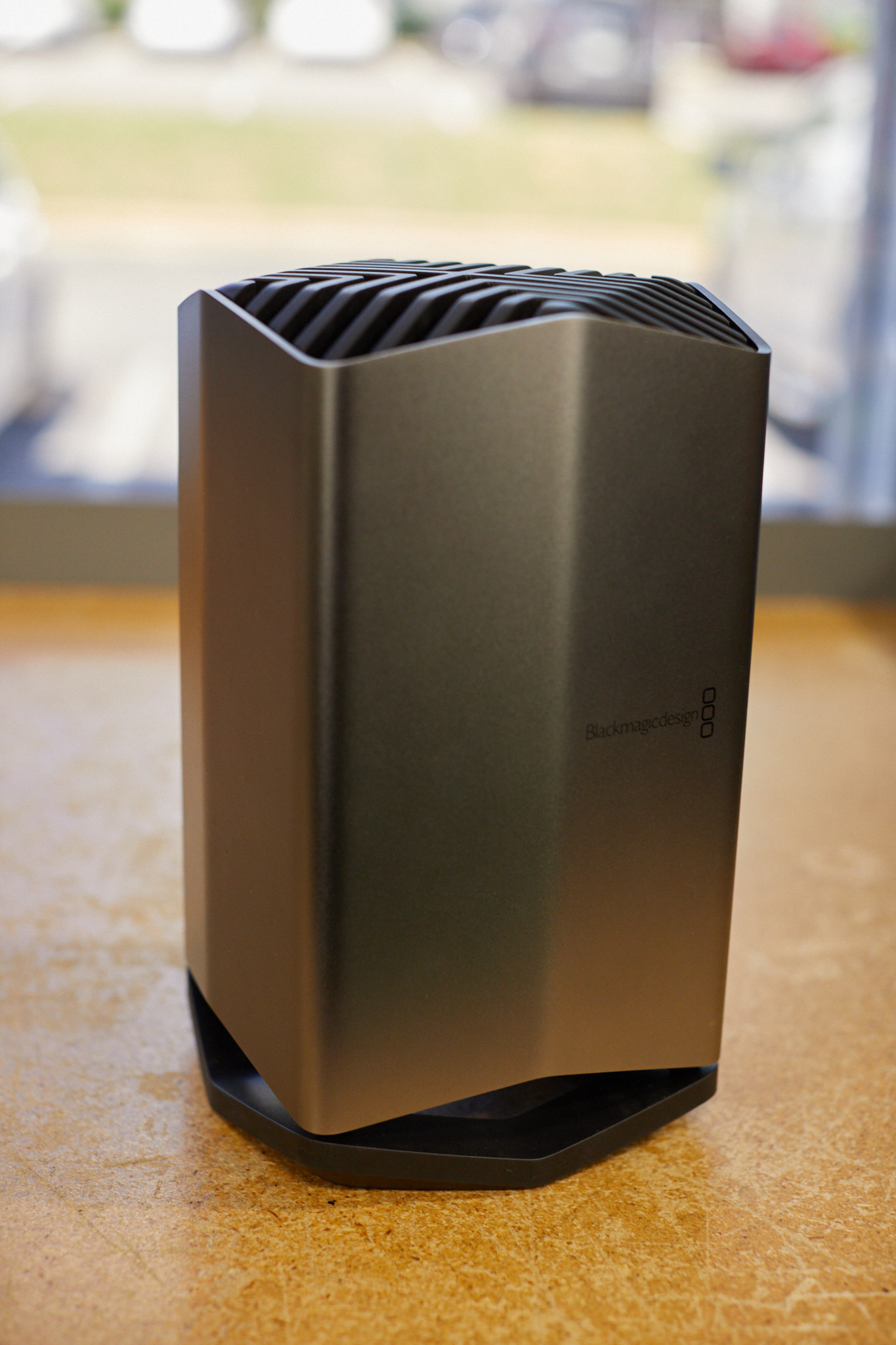 The Blackmagic eGPU Pro is basically just an external fan-cooled tower that houses a better GPU, specifically a Radeon RX Vega 56 with 8 GB of HBM2 memory. Graphics-intensive tasks like gaming or video editing are handed over to this more capable GPU over a super-fast Thunderbolt 3 connection. On the back, you’ll find a second Thunderbolt connection, HDMI and DisplayPort connections for additional monitors, and 4 USB-A connections so the unit can act as a kind of USB hub. Internally, in addition to the GPU, there’s a power supply large enough to provide 85W of downstream power. That allows you to charge your laptop over the Thunderbolt connection, which is a nice touch.

Blackmagic’s eGPU is far from the only one on the market. There have been plenty of these types of devices released by multiple manufacturers for both PC and Mac. However, for the time being, the eGPU Pro is the only one we carry because it’s relatively plug and play. There are no drivers to install or proprietary software to deal with; as long as you’re using a compatible device (any Apple computer with a Thunderbolt 3 port running macOS 10.14.1 or later), you just provide power and connect a single Thunderbolt cable. The OS automatically recognizes the GPU and should default to it when running any software that supports it. The downside to this ease of use, of course, is limited flexibility. In addition to the aforementioned device limitations, the GPU isn’t swappable, which I’d consider a major flaw for some users. 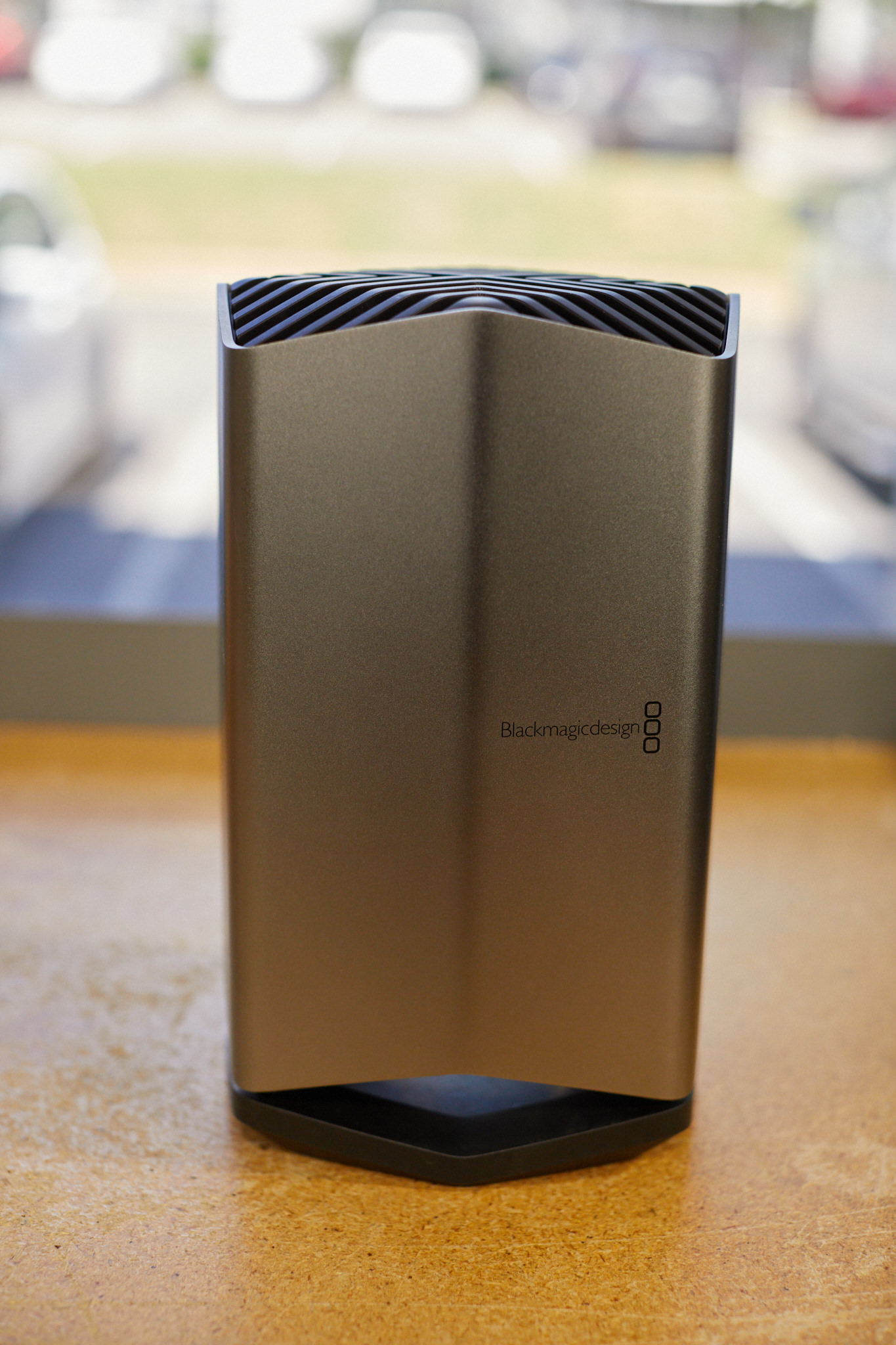 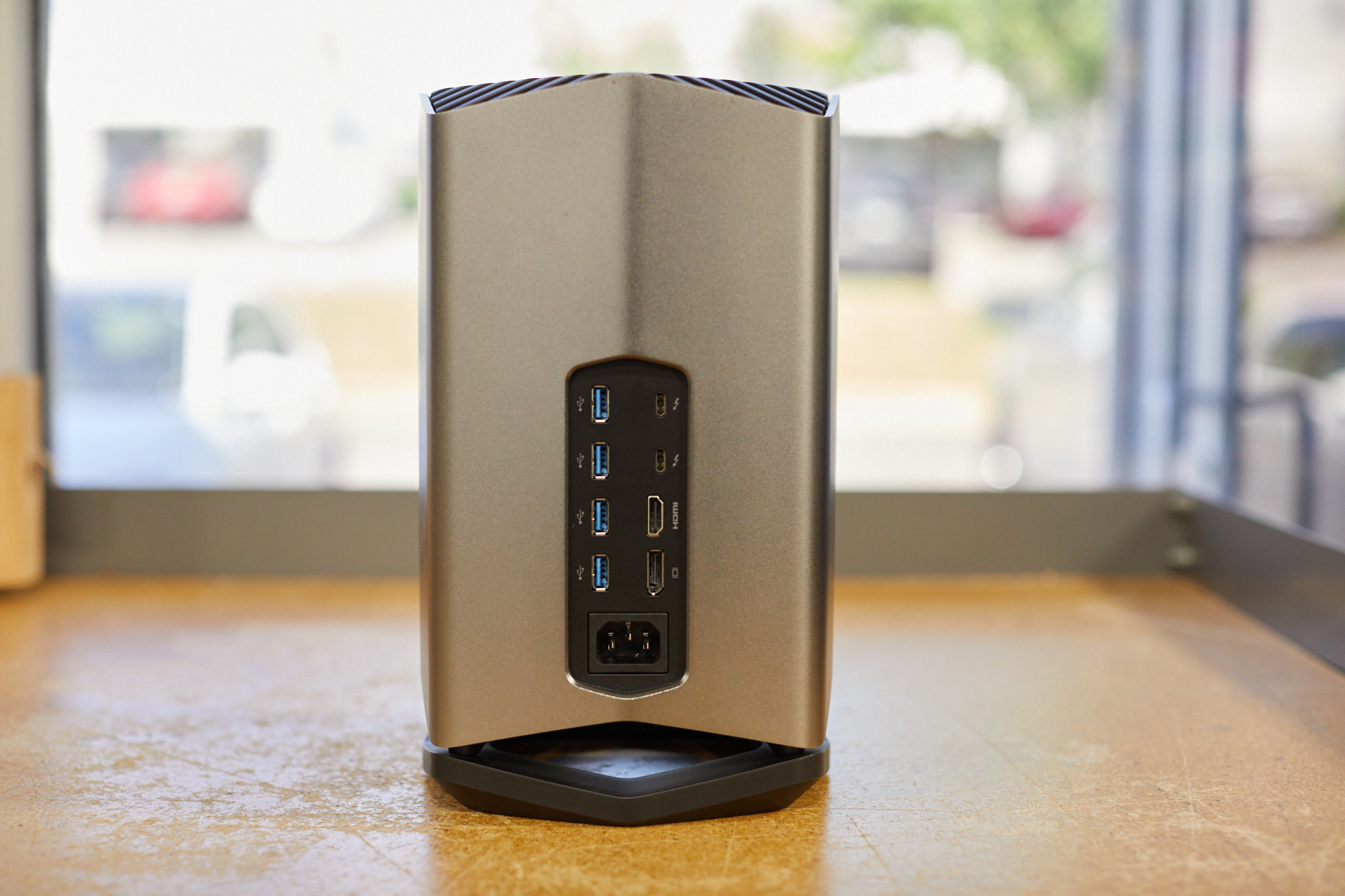 See, most other manufacturers making these kinds of products are basically just selling enclosures. You buy a $200-300 box from them with a power supply and a Thunderbolt port, then provide your own GPU and install it yourself. This is a little more complicated and requires some research on your part regarding what computers and software your chosen GPU will be compatible with, but it greatly extends the useful life of the enclosure because the GPU can be swapped out as needed. That ability is pretty much a necessity. More than that, it’s the entire reason this product segment exists. Laptop users without the ability to upgrade their own internal components needed a way to make sure their computers could keep up with ever-increasing graphics demands. So, all in all, if I were purchasing an eGPU right now, it wouldn’t be a Blackmagic eGPU Pro. Rental isn’t a purchase, though, and the limitations that make a Blackmagic eGPU Pro a less than perfect purchase are the very things that make it an attractive rental. For a rental, I don’t want to have to do all that research and driver installation. I just want something that I know will work with my computer and give me enough extra power for now to do the work I need to do, and the Blackmagic eGPU Pro checks those boxes for under a hundred dollars a week.

In terms of actual numbers, it’s hard to quantify exactly what kind of performance gains you can expect from the eGPU because it depends on a ton of different factors, including your CPU, the software you’re using, and what specific task you’re trying to accomplish. The closest I can get to an objective performance test is Geekbench, which is free software designed specifically to benchmark computer components. According to their GPU test, the Blackmagic eGPU scored 55685 in OpenCL mode and 66878 in Metal mode. That’s a significant improvement over my internal GPU, which scored 10722 in OpenCL mode and 12319 in Metal mode. 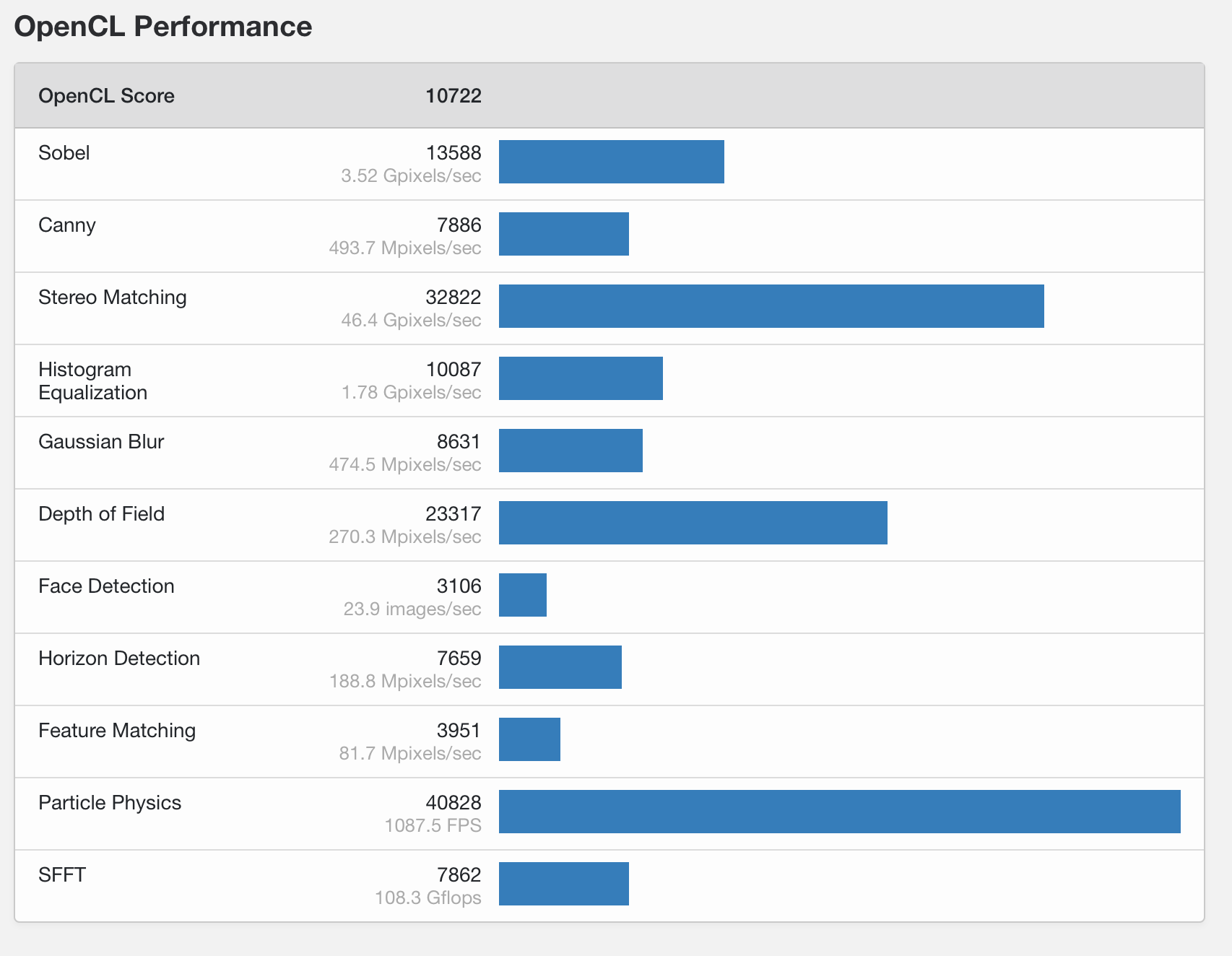 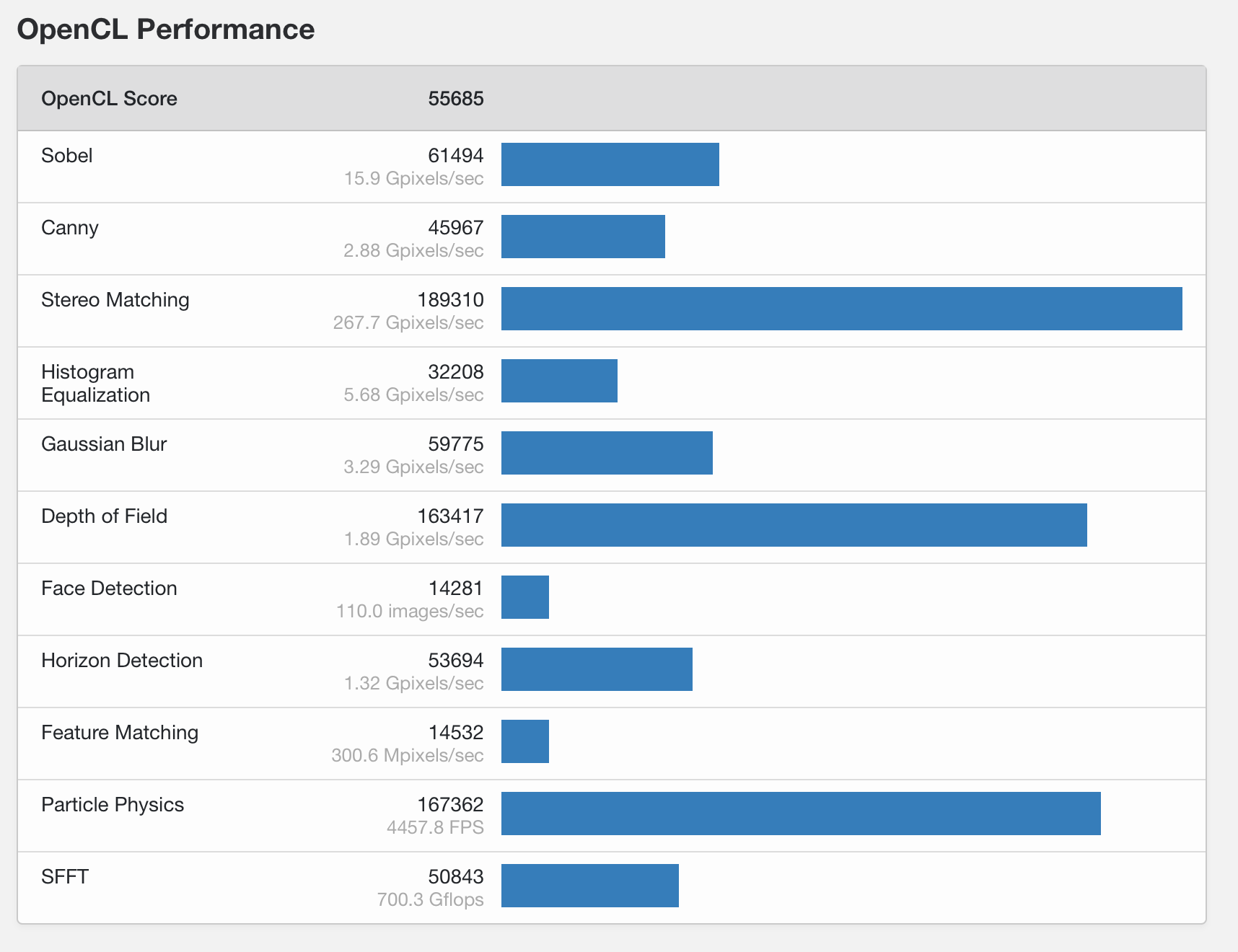 As a less objective but maybe more “real-world” test, I also downloaded an 8K 48fps Redcode RAW 10:1 clip from RED and ran a basic test in Davinci Resolve, the NLE best supported by the eGPU Pro. I applied some basic color correction to the clip (stored on my internal SSD), then exported a ProRes 4:2:2 master at 1080p. Using my internal GPU, that task took 2 minutes and 42 seconds. Using the eGPU, it only took 41 seconds. That’s a speed increase of more than three-fold. Like I said, your own mileage may vary depending on what you’re doing and the software you’re using, but that’s a fairly typical result.

Overall, while it’s not a perfect product, I think the Blackmagic eGPU Pro is a great rental for a very particular type of customer, as long as they’ve got compatible hardware and software. If you, like a lot of people right now, find yourself having to do creative work from home on a laptop that isn’t quite up to the task, consider trying one out for a week or so and see if it improves your workflow. Hopefully, Blackmagic will continue to update it with more current compatible GPUs or, even better, allow for swapping in future models.