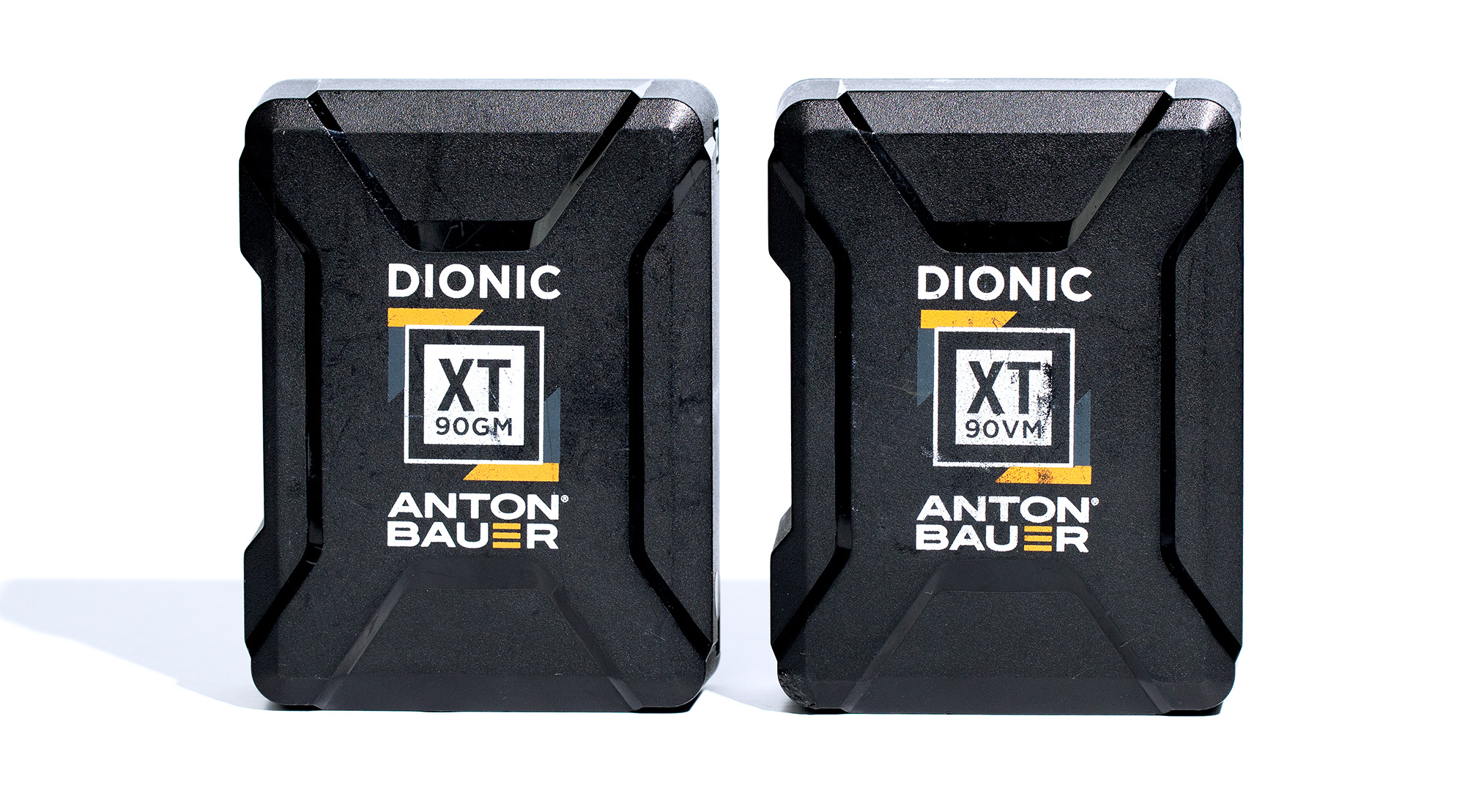 A curious reader recently asked for an explainer on the endlessly confusing world of professional video batteries. How is v-mount different from gold mount? What’s d-tap for? Are these things really worth the money? We don’t often get requests for video-related blog articles in the comments, so we try to accommodate as well as we can when it happens. Here’s everything you need to know about professional batteries. Or at least everything we could fit into a blog article.

Why Use These Batteries at All?

Starting with the obvious, third-party professional batteries typically have a much higher capacity than standard camera batteries. Let’s take the Sony FS7 as an example. Sony quotes about a 2-hour run time on the Sony FS7 using the standard BP-U60 batteries. That’s not bad, but not great either. Switching to a 90Wh battery like an Anton Bauer XT90 doubles that run time to about 4 hours. However, the XT90 is also about twice the size, twice the weight, and twice the price of the BP-U60. So, for a professional third-party battery to really be worth it, it would have to have some features and advantage beyond additional capacity, wouldn’t you say? I would.

See, in addition to the additional power capacity, third-party professional batteries also carry a huge advantage in flexibility. First of all, there’s the advantage of their compatibility with many different systems. We have gold and v-mount power options for nearly every camera and LED light we carry. So, no matter how many different devices you have on set, you could only have to source, charge, and distribute a single type of battery. Second, that flexibility extends to just about every other gadget you might encounter on set. A professional camera setup can include a monitor, wireless follow focus, servo lens, focus assist, or any number of other peripheral pieces of equipment that all require power. Using power outputs (more on those later) you can run all of this gear from the same battery, again avoiding the massive headache of having to keep track of several different battery types on a single job.

There are a ton of different third-party batteries out there, but, for the most part, if we’re talking about batteries you might use in a professional environment, we’re pretty much talking about “gold mount” or “v-mount.” These terms refer to the connection method between the battery and whatever it’s powering. Gold mount batteries are so named because they have large gold locating pins. They mount to the battery plate by sliding from left to right. V-mount batteries, similarly, are so-named because their locating mechanism is shaped like a big letter V. They mount by sliding downward onto the battery plate. 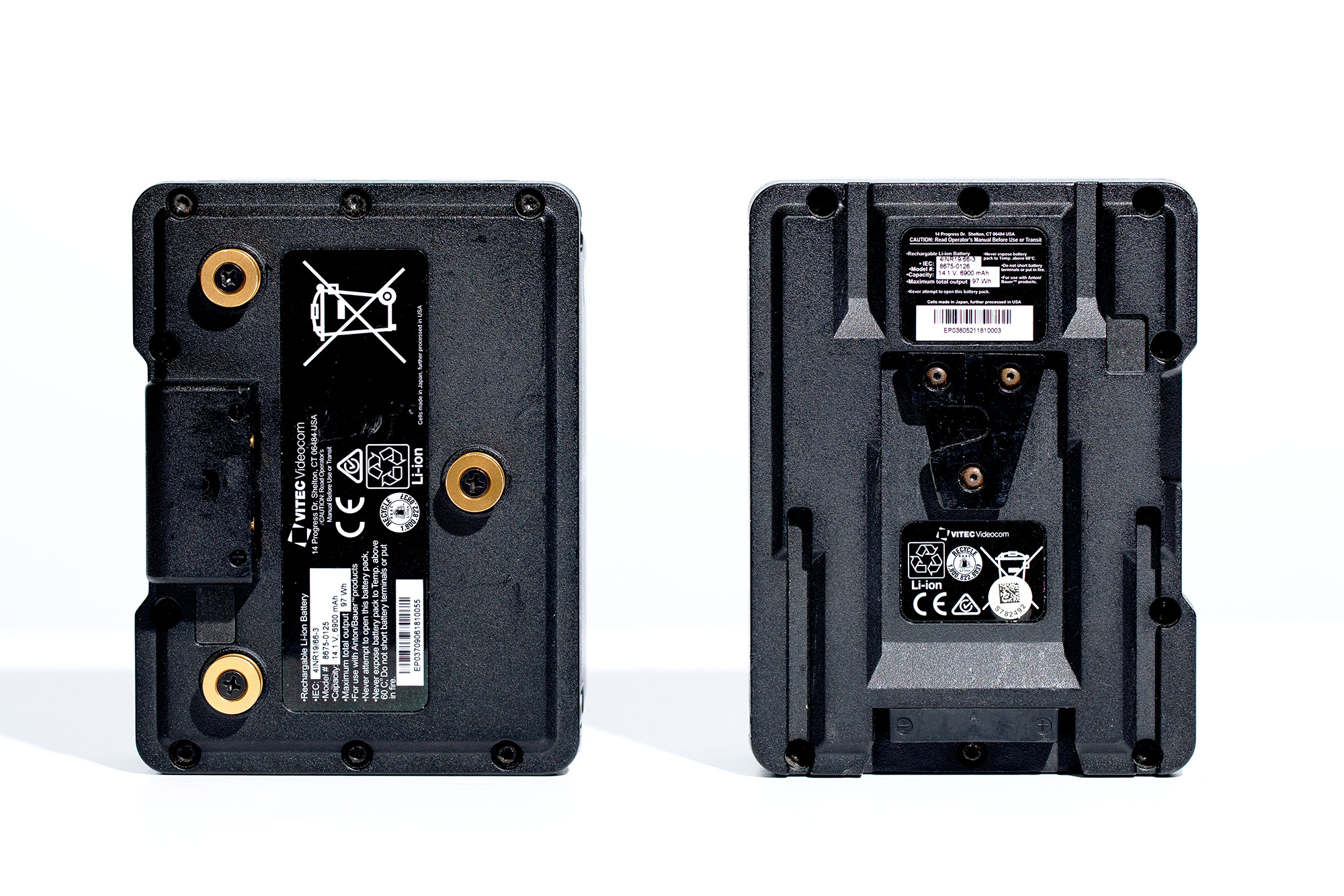 While there are some slight functional differences between the two systems, deciding between the two is largely a matter of taste, especially at this point in time. Early in the lives of these two systems, originally developed by Anton Bauer (gold mount) and Sony (v-mount) there may have been some compatibility concerns. Still, at this point, they’re basically interchangeable. Anton Bauer, by most accounts the most trusted name in the market, manufactures both types, and they’re both typically available in whatever model and capacity you like. For my part, I prefer gold mount, but only because I find the left to right connection method to be a little more convenient. Rather than steering a potential buyer toward one type or another, though, I’d say to just purchase whatever you prefer. But ALWAYS buy or rent a trusted brand (like Anton Bauer), and generally try to get batteries and chargers from the same brand.

If you browse our site for a while, you’ll notice we carry a few different models of both v-mount and gold mount batteries. They usually cost about the same, so what’s the difference? Honestly, not much. Manufacturers make small updates every few years. Housings get a few grams lighter, LCD screens move, wireless features get added. But it doesn’t add it up to much in terms of usability. Since the price is close to the same on every model, on a rental at least, the simplest advice I can give is to go with a relatively recent release that meets your needs and comes from a manufacturer you trust. For me, that’s the gold mount Anton Bauer XT90.

Whatever battery type you choose, you’ll typically find them in a few different capacities, measured by watt-hour. Where a watt is a unit of power, that is the rate at which energy is produced or consumed; a watt-hour is a unit of energy that measures the amount of work performed in a specific amount of time. It’s easiest to understand if you think of a light bulb. A 40-watt light bulb draws 40 watts from whatever is powering it. So, a 90 watt-hour capacity battery could power a 40 watt light bulb for 2.25 hours. That same battery could only power a 100-watt bulb for less than an hour.

90 watt-hours (which I’ll be abbreviating from now on, thank you) is by far the most common capacity for gold and v-mount batteries, but many others are out there, including 75Wh, 150Wh, and 240Wh. The reason you’ll only find 90Wh batteries for rent from us, and an important factor to consider if you’re thinking of purchasing a higher-capacity battery, is that the TSA won’t allow commercial passengers to fly with any lithium-ion battery that has over a 100Wh capacity. That goes for both checked and carry-on luggage. According to their website, special permission can be granted for batteries up to 300Wh by going through the airline, but I can only imagine how much of a hassle that is. Since so much of our gear has to fly on planes, both for shipping purposes and for travel to shoots once it arrives to customers, we decided to just stick with a 90Wh max for safety.

Voltage is another factor you’ll need to consider. Smarter people than I have explained this if you care to learn more, but, at a basic level, voltage is analogous to water pressure. It’s a measure of how much work can potentially be done by a circuit. All you really need to know for the purposes of this article is that devices that consume a lot of power have higher voltage requirements. For example, the Litepanels Gemini, which is the largest LED light we carry, has a 24 V requirement. As we don’t yet carry any batteries capable of delivering that, we use a dual battery plate that draws from two 14 V batteries at once, combining their voltage to power the light. If you’re looking into batteries for large LED lights or cameras that require high voltage, like the Gemini or the Alexa LF, 26 V batteries are available from Anton Bauer and other manufacturers.

Like I mentioned earlier, one of the primary advantages of using gold or v-mount batteries is that they can power other accessories like monitors or servo lenses. The port that outputs this power is usually located on either the battery plate or the battery itself and is referred to interchangeably as “p-tap” or “d-tap.” There is NO DIFFERENCE between these two terms. Neither is correct or incorrect, and they mean exactly the same thing. Some people say “d-tap” and some people say “p-tap.” From what I can tell, this stems from Anton Bauer originating and trademarking one of the two terms, but that’s as much research as I’m willing to do because it truly doesn’t matter at all. The “p” in “p-tap” seems to stand for power, and the “d” in “d-tap” seems to stand for nothing but the shape of the port. Say whichever one you prefer. I’m going to use “d-tap” here because that’s what we use on our site. 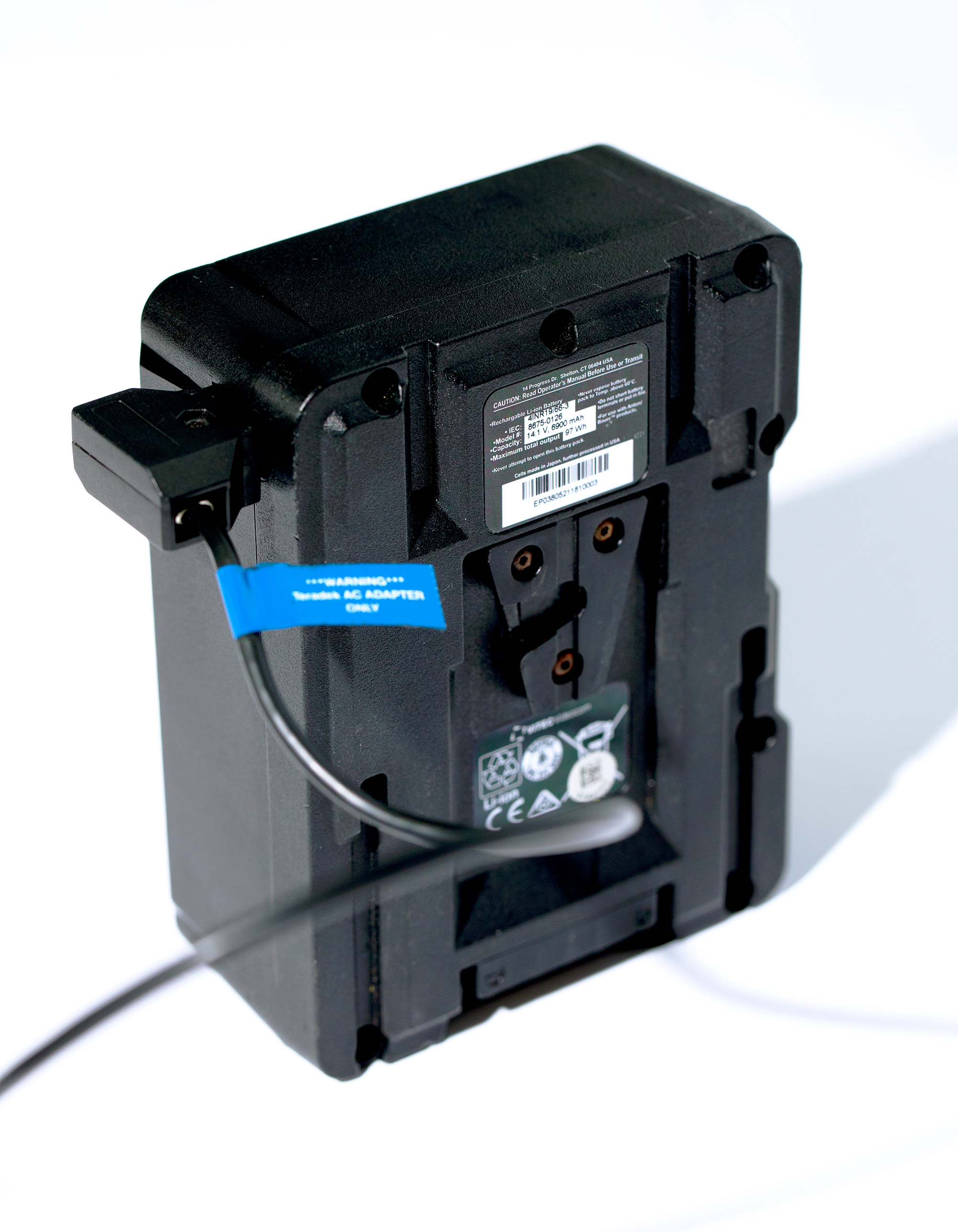 Since the inputs on the devices you might power using these ports vary pretty much endlessly, the cable you need will likely be a “d-tap to”…something else. D-tap to DC barrel, d-tap to 4-pin XLR, d-tap to 2-pin lemo, we’ve got them all. It’s important to double-check, though, that the cable you’re getting is the correct one for your device because mix-ups can easily fry your gear. If you have any questions or even a shred of doubt, it’s best to call us (if you’re renting) or the manufacturer (if you’re purchasing) to make sure. 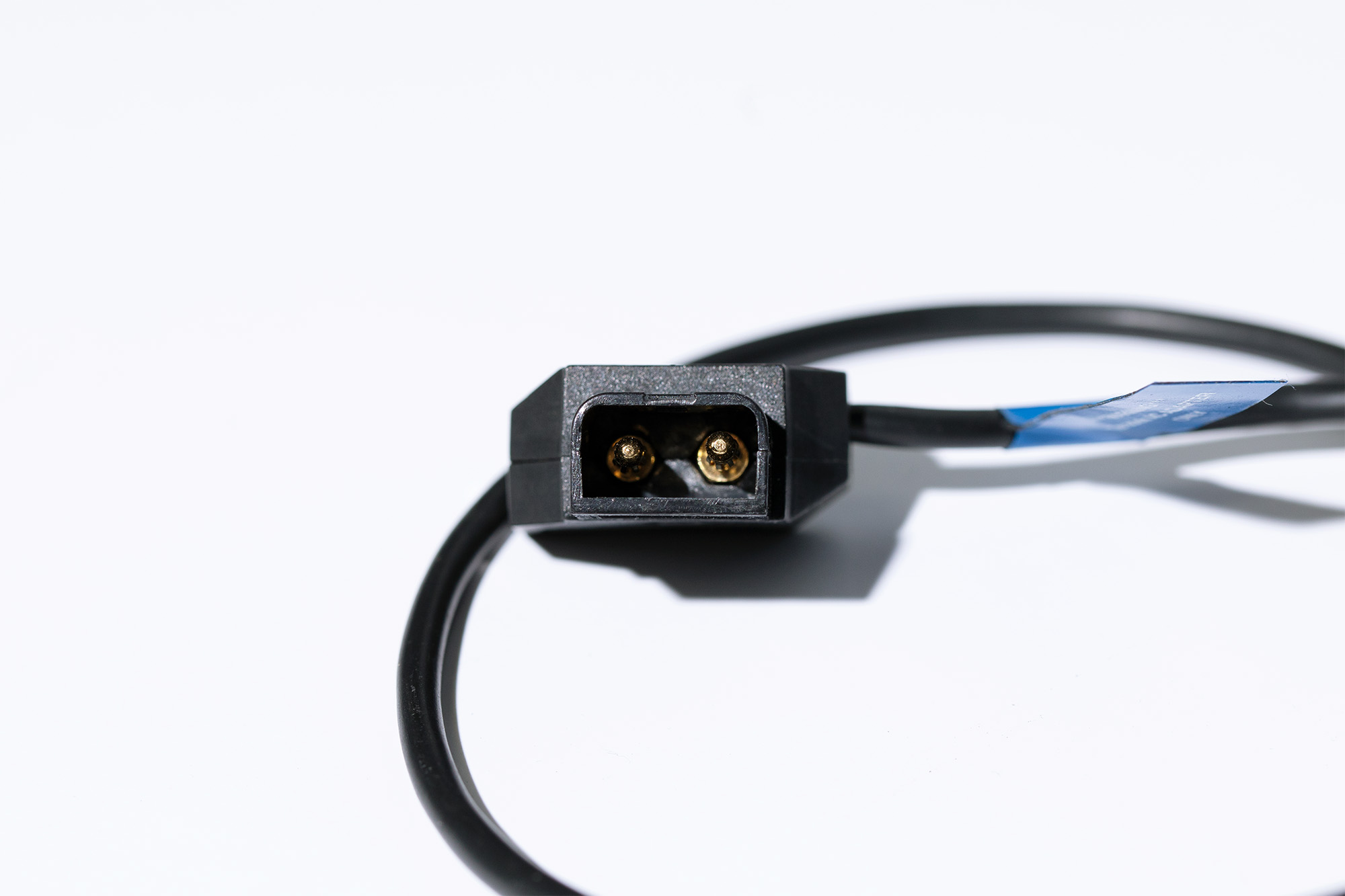 I hope this helps clear some of the fog around the purpose of gold and v-mount batteries. Once you get past a few complications, it basically boils down to this: these batteries are great a way to power everything on set using the same source, and it’s best to stick with one trusted manufacturer and standard that works for you. As always, if you have any questions, just give us a call or shoot us an e-mail, and we’ll be happy to help.