I haven’t published much optical testing in the last year for many reasons; some obvious, some not. But published or not, we still test things, and occasionally something comes up that I think I need to write up. The Sony FE 20mm f/1.8 G is one of those things.

This is actually rather spectacular. The center resolution is phenomenal. (Remember, when comparing to an f/1.4 lens, being tested at f/1.8 gives an advantage, but even so, it’s phenomenal.) Resolution drops off slowly and steadily towards the edges. Most amazingly, there is almost no separation between the sagittal and tangential MTF, which means there is almost no astigmatism or lateral color. 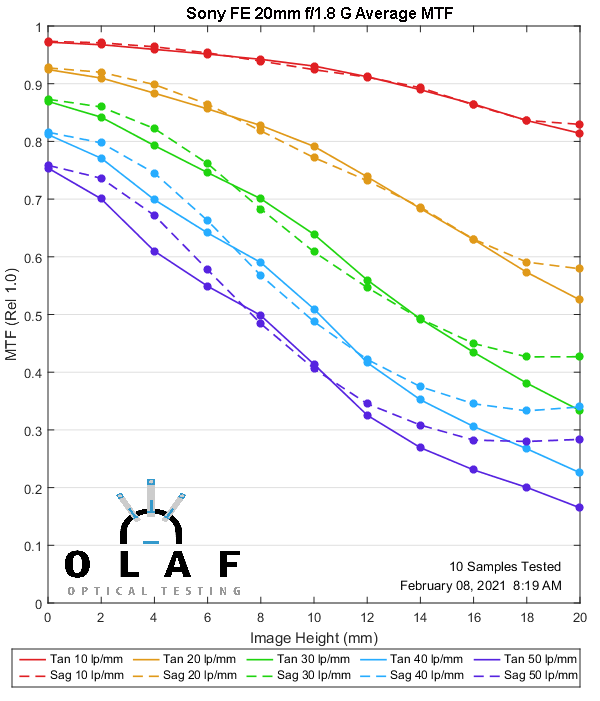 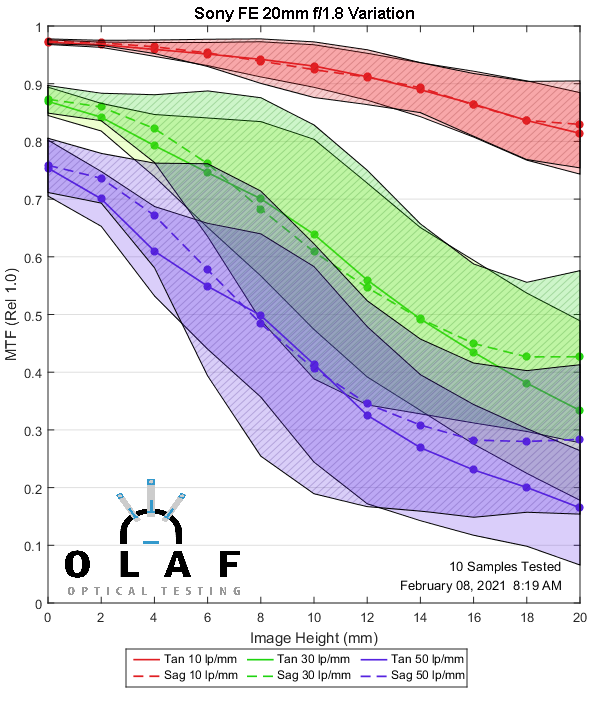 This isn’t awful, but it is a little worse than average for a wide-aperture prime. Here are a couple of ‘good variance’ wide primes; the Canon 24mm f/1.4L II and the Zeiss Milvus 21mm f/2.8 for comparison. Notice the Sony above is significantly sharper than the Canon, and math says higher resolution increases variance a bit. 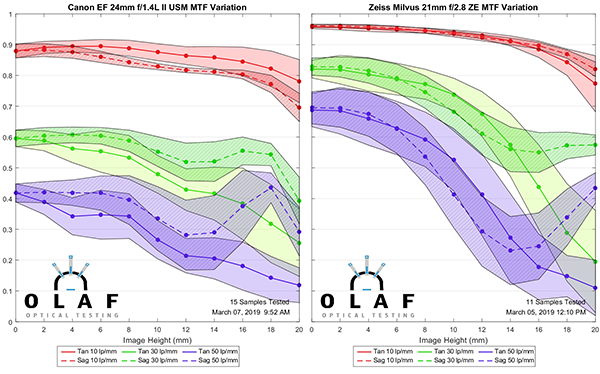 The field curvature here is remarkably flat for a wide-angle lens in both the sagittal and tangential planes. This is not an easy thing to accomplish. The flat field with little astigmatism makes it a superior lens for landscape, astro, and architectural work. It is a little bit softer in the outer 1/4 of the image, but that would, of course, improve as you stop down a bit. 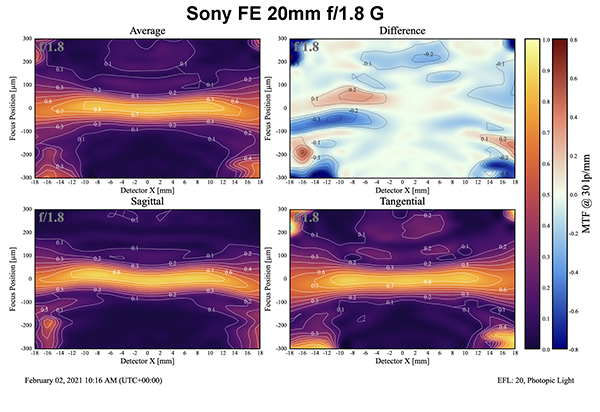 Measuring distortion in Sony lenses often leads to further discussion. Measuring just the lens on the bench (optics only, no camera involved) shows about 1.9% distortion in a mustache distribution. 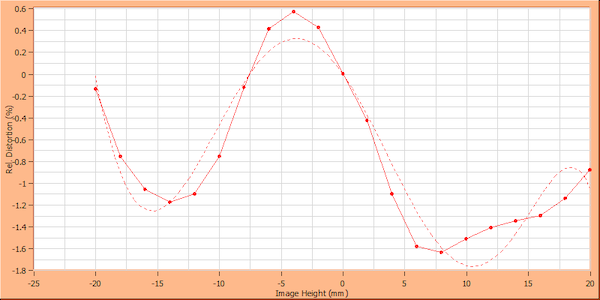 Lensrentals.com, 2021. This sample is slightly tilted, but you can see the mustache pattern.

Tests using Imatest or other image computer target analysis (using a Sony camera) show a similar distortion pattern, but a much lower amount (0.7% or 0.8%), even with distortion correction turned off in raw conversion. I don’t like modifying raw files, so I mention it, but most people don’t care.

A Couple of Comparisons

I said earlier that this is a surprisingly good lens. Here’s a couple of comparisons to help visualize that.

The Sigma has the advantage of a wider aperture and comes at an equivalent price. 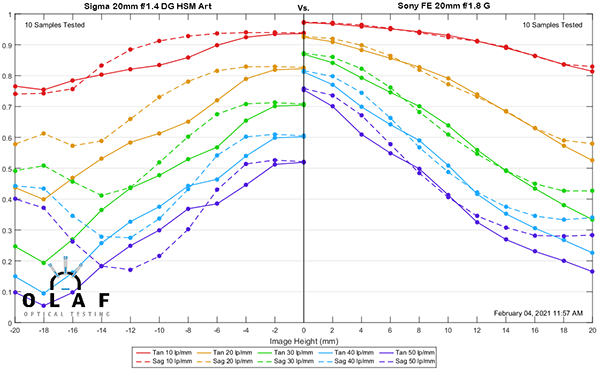 The Sigma will sharpen up a bit at f/1.8 compared to the f/1.4 it’s being tested at. However, the Sony will still be significantly sharper in the center of the image and has far less astigmatism-like separation between the sagittal and tangential fields. In other words, unless you need f/1.4, the Sony is better.

This isn’t really a fair comparison, the Nikkor is a full generation older than the Sony, but it is a good example of how far wide-angle lens design has progressed over the last 7-8 years. In this one area, newer is clearly better. 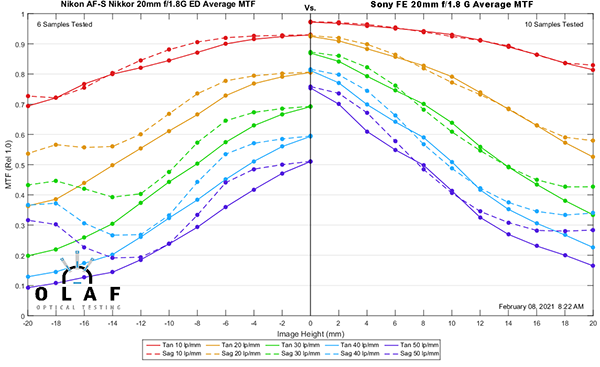 This is probably not a really useful comparison; the 24mm is twice the price, a bit wider aperture, and not nearly as wide as the 20mm. Still, I think some people would be deciding between one and the other, or perhaps deciding that their zoom might cover 24mm, and the 2omm serve as a reasonably wide aperture prime. 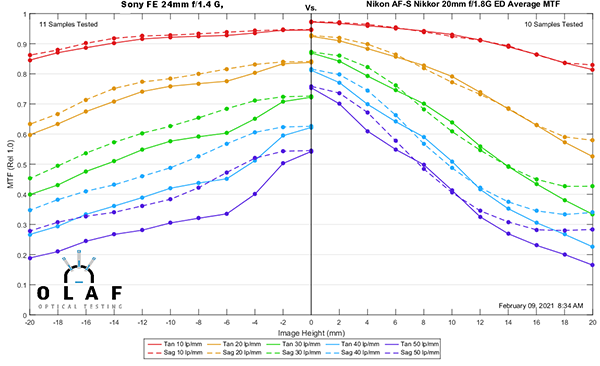 As discussed above, the 24mm will be sharper stopped down a bit. I didn’t have time to run a whole set of lenses stopped down, but did one copy of the 24mm f/1.4 at f/2.8 to demonstrate the change between wide open and stopped down. Even at f/2.8, though, the 24mm isn’t resolving much (if any) better than the 20mm f/1.8 at f/1.8. And it still has more sagittal-tangential separation. 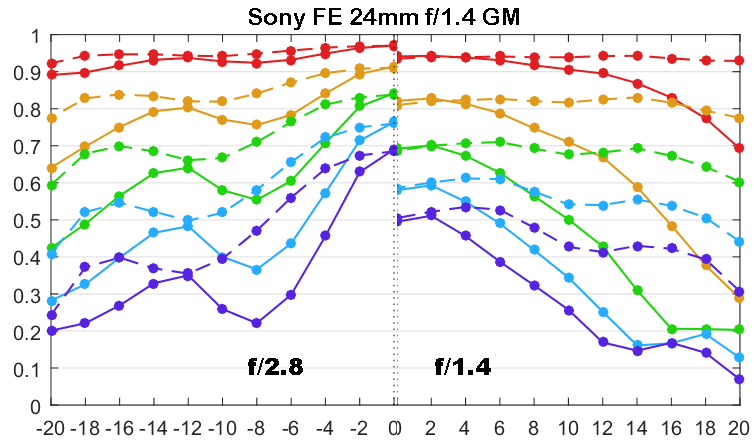 So What Did I Learn Today?

I keep saying Sony lives out there on the cutting edge of technology, always going for the home run shot. Sometimes that results in a swing-and-a-miss,  but when it works, everyone leaves their seats. The FE 20mm f/1.8 is a home run. It’s really amazing. The resolution is awesome, the lack of astigmatism and lateral color is more awesome, and the flat field double-secret most awesome.

I can spew superlatives for a paragraph or two, but it’s really not necessary. Sony fanboys are going to do plenty of that because this is what they live for. If you want a wide-aperture prime for your FE system, get this one. If you don’t want a wide-aperture prime for your FE system, heck, get it anyway. You might be missing out. If you’re thinking about getting a 24mm f/1.4 GM, get this one instead and save a few hundred bucks. If you don’t shoot FE, well, prepare to listen to the Sony fanboys tell you why you should have.