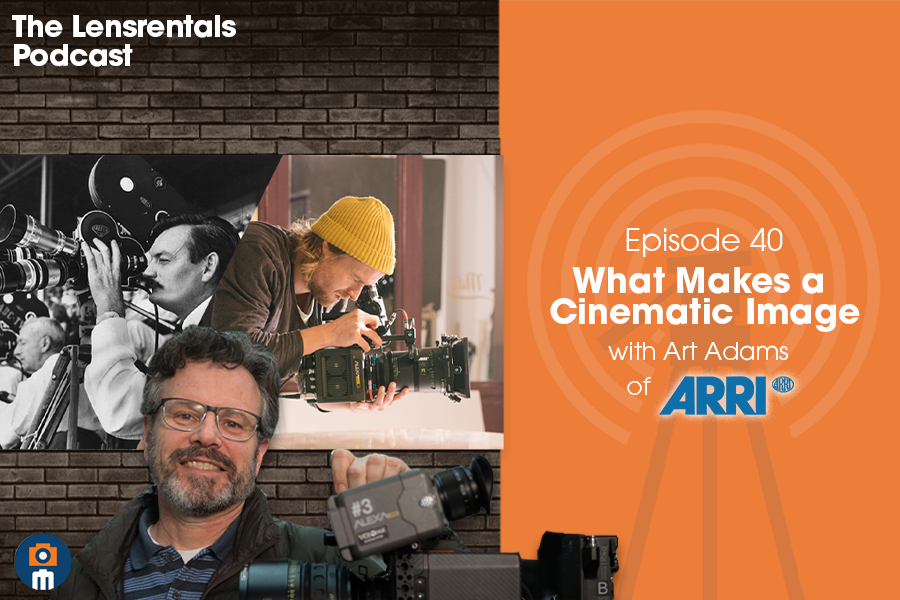 What Makes a Cinematic Image w/ Art Adams from ARRI

This lens is cinematic – this lens is creamy. Too often we’re using verbs to define a lens, with no real strong definition. And so, that is the topic of today’s podcast. Ryan Hill is joined with Art Adams from ARRI, as they go through a number of verbs that are used to define a specific look, and how those looks are accomplished.

Art Adams is a Cinema Lens Specialist for ARRI, and helps on current and future lens projects from the brand. With over 30 years of experience in the Director of Photography field, Art has masterfully crafted the vision of numerous directors when working on set. And as such, has discovered how everyone has a different example of such vague terms like cinematic.

Among the terms deduced in this episode are ‘cinematic’, ‘film’, ‘character’, and ‘large-format look’. If you’ve ever been on set, you’ve likely heard at least one of those terms used by the production, and it’s often the job of the DP to determine what that means in a technical sense. Not only do Art Adams and Ryan Hill break down their own explanations of these terms, but they also offer suggestions as to how to sell these specific looks to directors, using your own sense of verbiage.

Art graciously told us we could share his email with our audience, so if you have a question we didn’t get to on this podcast you can reach him on your own at lenses@arri.com.

1:10- First up, we have to ask, how do you say ARRI? Short for Arnold and Richtor, there are 2 different pronunciations and Art tells us which is most used in America.

2:00- What is the day-to-day of a Cinema Lens Specialist at ARRI? Technically he is in sales but Art feels like he teaches art appreciation when talking about the lenses and cameras his company creates.

4:10- When Art saw a camera with a look that he liked, he tried to figure out what his brain was responding to about that look. And if he could figure out what that is, he could go to someone else and say ‘I see this and this and this, and I really like that! Do you see those things as well?’ In an attempt to have some objective language around describing how a scene is put together to evoke certain emotions or looks.

5:05- Previous work as a DP, AC, and camera operator helps Art translate back and forth between the science and art worlds of cinematography. The people who make the products do a spectacular job making them, but they don’t always know how to describe them. And so Art think it’s important to bridge the gap.

7:15- There’s not a good vocabulary around describing lenses, and it can get pretty frustrating.

8:00- Wines and cinema lenses have more in common than you may think, specifically with there not being an objective definition behind many of the descriptive words.

9:20- Art finds that asking directors about emotions instead of technical descriptors can be helpful.

10:10- At Lensrentals we are often asked to recommend gear that will provide a “cinematic in look”, and that’s a hard question to answer. How does ARRI define a cinematic look, or is it definable at all?

12:50- Because ARRI engineers spent a lot of time looking at how film handles highlights they’ve figured out how to roll off those highlights in a very beautiful filmic way so color distortions are never seen.

13:20- On the lens side there’s a lot of lens aberrations that cinematographers have embraced since 2000. Layers, grain, the goal with film lenses was to have very sharp lenses to deliver the emotional punch desired. When digital lenses were super sharp it drove cinematographers to look back at older lenses they had used in the past to convey the desired emotional state.

16:00- It’s hard to say what “cinematic” is because a lot of the things that lens designers were trying to get away from for the first 100 years of cinema then came back for about 15 years.

17:20- The signature lenses are designed to be beautiful and 10 years from to look at something you shot and it will look even better in the future.

20:00- Aspects of what vintage lenses did are being introduced to modern digital lenses, creating a pretty cool combination of technology.

21:20- “Character”, let’s get more specific about Signature primes and bokeh. What is DP’s typically looking for? And were aspects of lens design contribute to that aesthetic?

22:20- A lot of time when people are talking about bokeh, they’re talking about out-of-focus light sources and how those are rendered. That’s not really what bokeh is, bokeh is the entirety of the autofocus image and how that’s rendered.

26:50- What is the “large-format look”? Art says often people say “It makes me feel more present with the actors, I can get closer with a wider lens and a lack of distortion makes me feel like I’m right there.” Well, maybe, but Art thinks that really only applies to older lenses where there was a lot of distortion. After a lot of testing he’s figured out is it’s all about the depth of field.

29:40- The Umbrella Academy is shot on the Alexa 65, and they do a lot of wide shots. It almost feels like the characters are cut-outs in front of a painted backdrop. It sounds like it would look artificial, but it’s actually just fascinating.

30:10- What’s Art seen come in and out of vogue when aiming for a “cinematic look” over the course of his career?

32:00- Has lens design changed much with advancements that have made color correction easier? Theres a kind of clarity to the ARRI lenses that give you more color discrimination, especially in the shadows.

34:20- What is ARRI working on now that Art can talk about? There is a new camera coming out soon that will have a new sensor design.