Many of you know there’s nothing I enjoy more than doing meaningless tests just out of curiosity. I tend to not publish most of them because I figure nobody but me is really interested, but I’ll throw this one out there. We got our first batch of Canon G1X cameras in. I’ll be blunt: I don’t particularly like them. I want the option of a viewfinder (the door of most hotel rooms have better viewfinders than the thing they put in this camera) and I’m not happy with a standard range lens that’s f/5.6 for most of its range.

But I have to admit the images I’ve seen with the G1X seem to have really high resolution. So I thought I’d do a comparison and run some G1X cameras through Imatest to see just what the MTF50 turned out to look like. Since I consider the G1X to be mostly a G12 (point-and-shoot) replacement I decided to do some G12 cameras too, just to see the difference. And since I had some 7D cameras with 17-55mm f/2.8 IS lenses handy I thought we’d just see how the G1X stacked up against them.

The usual “don’t read this stuff and go insane” cautions apply: this is a test of lens and sensor resolution done at a distance of about 14 feet. The results might be different at 4 feet or 400 feet. Focus is done manually and bracketed so it’s not a test of a camera’s autofocus ability. It’s tested using a controlled lighting test target with a hardware mounted camera and Imatest software, so photos taken in the dark of night or hand-held for 12 second exposures will give different results.

But the results are interesting just the same. For those of you not familiar with our usual charts, this shows the MTF 50 for 5 copies of each combination. The horizontal axis shows peak resolution in line pairs / image height. The vertical axis is weighted average resolution (center = 1, middle third = 0.75, corners and edges = 0.5) in line pairs / image height. We test with unsharpened RAW images so our numbers will be lower (and more valid) than tests using jpgs.

Also, unlike our normal quality control tests where we shoot the lenses wide open, these are all shot at f/5.6: at the distance chosen the maximum aperture of the G1X lens was f/5.6 so we stopped the others down to f/5.6 to make them equivalent. (Might be worth noting that even the G12 could have shoot at f/4 at this distance.) 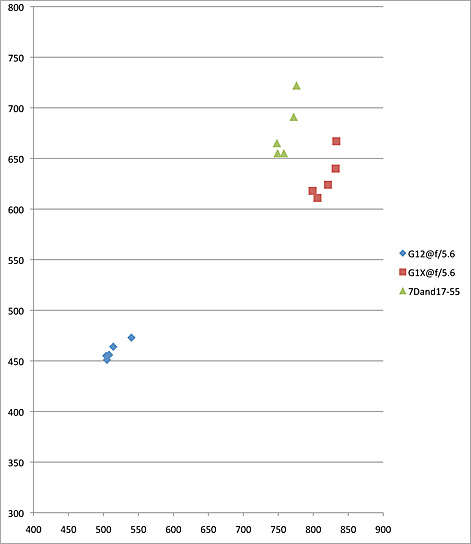 The results aren’t particularly surprising from one standpoint: both the G1X and 7D with 17-55 f/2.8 IS lens resolve way better than the G12 (which is a really good point and shoot, but still a point and shoot). I was a bit surprised that the G1X had slightly better peak resolution than the 7D with 17-55 f/2.8 (both shot at f/5.6); the 7D has more pixels and I would have thought the 17-55 was a better lens. Rumor has it the G1X has a very weak AA filter which may give it an advantage in peak resolution. The G1X didn’t hold up as well in average MTF across the entire image – in other words it wasn’t as sharp in the edges and corners. I can’t say why, exactly, but looking at the 17-55 f/2.8 IS lens and comparing it to the much smaller zoom built into the G1X I would just assume the lens has a lot to do with it.

What does it all mean? Not much. The G1X resolves well, but we all expected that. I’m not sure I expected it to resolve quite this well, and have to say it’s pretty impressive. If you want something as easy to carry around as a G12 that gives an SLR quality image, you won’t miss wide aperture lenses, and don’t mind using the LCD to compose and shoot it’s a good camera for you.