So the usual happened today: I read in a couple of places that the Canon 18-135mm IS STM lens isn’t going to be available in the U. S. for a while. A few minutes later Tyler walks in my office with one, asking if I want to test it.

Let me be clear where I’m coming from: we never stocked the Canon 18-135mm IS lens because I felt it just wasn’t that good of a lens. I guess my summary would be that it has much better range than the kit lens but about the same image quality. If you shoot at f/8 it is reasonable.

I had heard that Canon had not only slapped an STM motor in the new lens, they’d also optically redesigned it. It’s still similar with 16 elements in 12 groups, but there had been some tweaking of the elements and the addition of one UD glass element and PMO (precision molded optics) aspherical element. 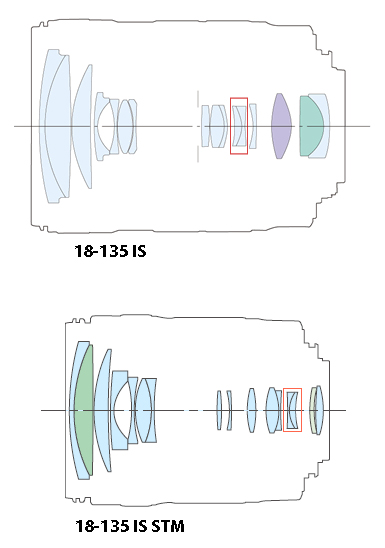 Canon’s MTF charts suggest the new lens is clearly better than the older version, at least at the telephoto end. (If you don’t understand MTF charts you can read about them here, or just take my word that, in general, higher is better.) 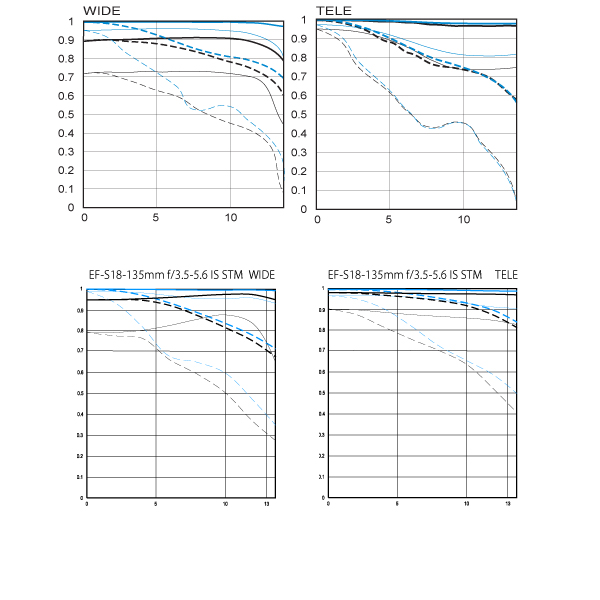 Anyway, we got our hands on one. Some people (particularly those shooting video) were excited about it, so I thought we’d test it.

The usual disclaimers: I’m not a lens reviewer and this isn’t an in-depth review. I have a lot of Imatest data about resolution and can test it and compare it to other lenses. Resolution is usually fairly important to photographers, less so for those shooting video.

What I don’t have are Imatest results from the previous 18-135 because we never carried it. However, I have results from a well-known, sharp variable aperture EF-S zoom, the Canon 15-85mm f3.5-5.6 IS. This lens is known to have excellent resolution and is of similar aperture. It’s about $100 more expensive than the 18-135mm, though, and it has a shorter zoom range, so we’d expect it to be at least a little better.

I started the comparison at 50mm for two reasons: 1) that is away from the extreme of both lenses (where performance is sometimes weaker) and 2) both lenses were f/5 wide-open at 50mm, which let us compare apples to apples.

I’m putting partial-data Imatest MTF50 charts up because in this case they do a better job of describing the lenses than simple peak and average MTF 50 numbers. (It’s partial data because if I put up all of the data points it becomes unreadable pretty quickly.)

The interesting thing is the lenses are tuned rather differently. The 15-85 has much higher center resolution, while the 18-135 has better corners. It’s a nice demonstration of a lens designer’s preference. It’s also a good demonstration of why peak resolution isn’t all that: If I were shooting landscapes I might well prefer the 18-135 at this focal length to get those nice sharp corners. If I were shooting single objects, I’d prefer the higher center resolution of the 15-85.

One other thing to point out is that pincushion distortion is present in both lenses at 50mm. I was not horrible—0.99% on the 15-85mm and a whopping 1.45% on the 18-135.  That wouldn’t be a horrible number at the telephoto end of a 5x zoom, but it’s a bit surprising in the middle.

Measured at 18mm distortion isn’t bad for the 15-85 at 0.95%, but it is really significant for the 18-135 at 3.8%. (To be fair, the 15-85 has 2.5% distortion at 15mm, though.) One of the video guys has nicknamed it the “Fisheye Superzoom” already. Sure, you can remove distortion in post-processing—which reduces the resolution, which at the wide end this lens is already struggling with. 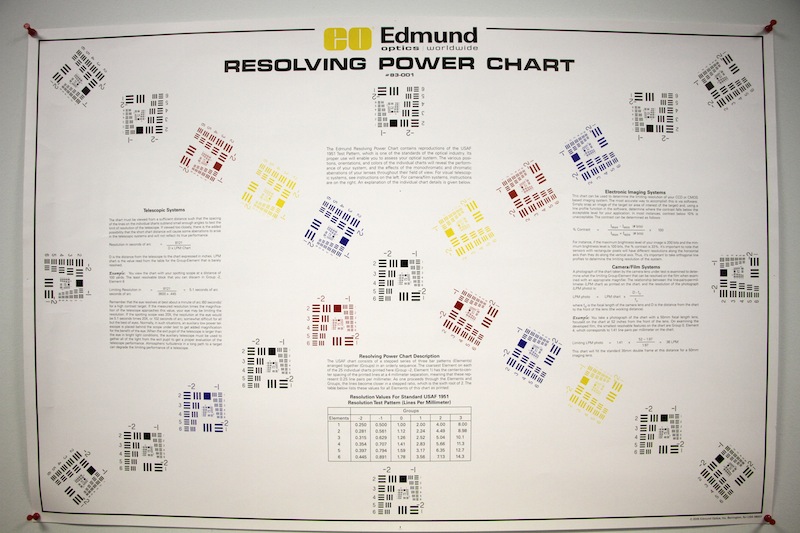 Barrel distortion is pretty significant at the wide end.

AT 135mm the lens is doing better than it does at the wide end, with peak resolutions of about 640 and mean resolution of 580 LP / IH. There’s a bit of pincushion distortion at 1.4% but nothing severe. This agrees with Canon’s MTF charts where the telephoto end appears a bit stronger than the wide.

Autofocus with the STM motor was smooth and accurate on T4i and 7D cameras. The video techs took it for a spin and said the AF worked very well, as did the IS on some footage they shot here. Zooming was described as “not far from parfocal,” but focus breathing was apparent.

Obviously, the lens is designed with video in mind. Given that video is less resolution-intense than photo work, it may very well be suitable for that. The very wide end of the lens may not be very useful for video, though, given the barrel distortion. From 25mm and upwards, that is not a problem. Otherwise, well, if you really need the range and really want to just carry one lens, this might be OK for you.

Tweet
Posted in Lenses and Optics
Is Sony Going to be the Digital Kodak?
The Olympus 75mm f/1.8 is Expensive Because It’s Worth It.