I while back I put out a notice that the Sigma 150mm and 180mm OS Macros had an issue if you shot JPGs on a Canon 5D Mk III and left peripheral illumination correction on. The camera auto-corrected for vignetting that wasn’t there, leaving an interesting pattern with a dark center and lightened edges and corners. 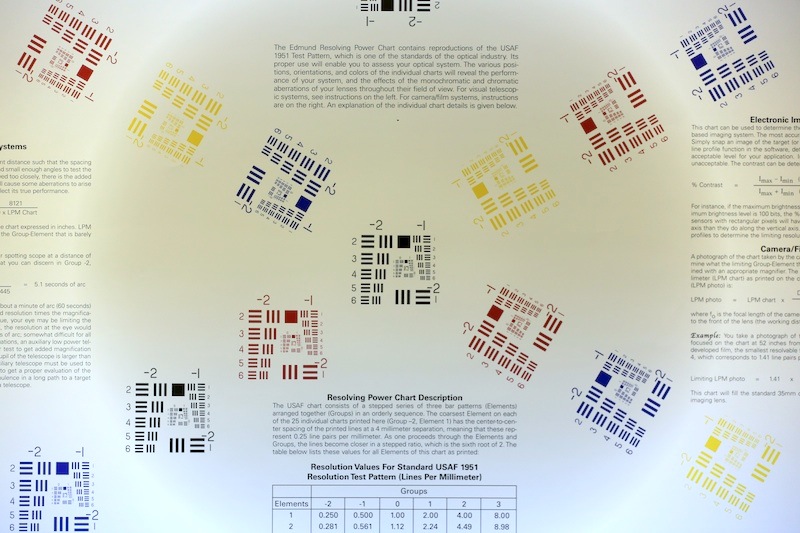 Several people emailed me about different combinations of cameras and lenses that did similar things. The interesting thing was some people clearly had the problem with a certain lens, but other people clearly didn’t have the problem with that same lens. Some people saw the same lens act up on one Canon camera but not a different one. Some people assumed it was because the third-party lenses identify themselves to the camera as this or that Canon lens. Several claimed only bad photographers noticed it; while others felt it was a rumor started by Canon to keep people from buying third-party lenses.

It was all very confusing. So I thought I’d spend a couple of hours trying to figure out what was actually going on.

That didn’t turn out like I expected. Instead of a couple of hours, it was over a week. In the end, though, we ended up with some useful information about what does cause the issue and debunked at least one myth. Like so many things we look into in our lab, it ended up creating some new questions, too. Plus it gave a few hints about how cameras and lenses talk to each other.

I’ll warn you, though, if you don’t use third-party lenses on Canon cameras, or you aren’t into how camera electronics work, you’ll find this very boring. If you just use third-party lenses, but don’t care about why this happens, just drop down to the last table and at least we’ll show you exactly when it will happen.

Other than that, this does provide yet another piece of evidence in the message I keep trying to deliver: When you ask about this Sigma lens or that Tamron lens only ask people who shoot the same camera that you shoot. Because third-party lenses do NOT behave the same on different cameras.

A number of people felt this problem (and some others) resulted from third-party lenses identifying themselves to the camera, at least partially, as being a Canon lens. Rolando Ruzic linked me to Phil Harvey’s excellent ExifTool software, and I started doing some investigation into this. ExifTool (in the majority of cases) correctly identifies the third-party lens that is attached to the camera and also tells us what the lens tells the camera that it is.

We shot images with every third-party lens we stock on various Canon cameras and noted which Lens ID the lens was using. To make a very, very long story short – the lenses identify themselves the same way to every camera. So, the Tokina 12-24 f/4 PRO tells every Canon camera that it actually is a Canon 20-35mm f/2.8 L lens.

But the Tokina 12-24 (and a number of other third-party lenses) don’t have the peripheral illumination problem on every camera.  It doesn’t matter what Canon camera the lens is mounted to (and we repeated it with every lens on every body), the third-party lens is always identified as the same Canon lens. So obviously Lens ID does NOT have anything to do with how peripheral illumination is controlled.

Because some will be interested, and because we went to the trouble to get the data, here are the various third-party lenses and what lens they actually identify themselves as to the camera, according to ExifTool.

Please note that all Zeiss and Voigtlander manual focus lenses identify themselves only as Zeiss/Voigtlander MF lens, even if they have AF confirmation. This suggests that the lens identification may have something to do with telling the camera what AF signals to send to the lens motor. All completely manual lenses (Rokinon, Schneider, etc.) do not identify themselves at all.

Have I Mentioned I Really Started to Hate This Study?

In looking at all of the data ExifTool provides, we noticed there was a section regarding peripheral illumination. It told us if Peripheral Illumination Correction was on or off, and gave a numeric value associated with the correction. We spent a lot of hours looking at the numeric values. At first, we incorrectly assumed the numeric value was the issue. Since it changes from one lens to another we thought the Lens ID might be assigning an incorrect numeric value to the third-party lenses.

So we literally took several hundred images with a dozen different lenses. We varied focal length, ISO, illumination, zoom range, cameras, and lenses. We plotted that peripheral illumination number with every possible combination and variable. The data filled up 12 pages on a legal pad and we painstakingly put it all in an Excel spreadsheet. We analyzed it. We charted it. We cussed at it. When we were finished, we just cussed.

Because that number varies with all kinds of things: lens, ISO, focal length sometimes, but not others. Most importantly, it’s not the same for a third-party lens and for the Canon lens the third-party lens identifies itself as. For example, the Sigma 180 f/2.8 OS is identified as the Canon 100-400, but the numerical value they show in the peripheral illumination section are different.

In other words, if you look at the Peripheral Illumination menu on the LCD with the lens mounted, the camera either tells you that it has data for that lens, or that the data is unavailable. The newest lenses and tilt-shifts lenses don’t have peripheral illumination data. We tested every camera, including the 5D III, 1Dx, and 7D with new firmware. When no data is available, peripheral illumination is automatically turned “Off” according to the Exif data even though you have it turned on in the menu.

So we went back to our 6-page spreadsheet and checked two camera-lens combinations we knew had the problem. Sure enough, when either a Sigma 180mm f/2.8 OS Macro or a 150mm f/2.8 OS Macro was mounted to a Canon 5D Mk III Exif data showed peripheral illumination was ON. The other Sigma lenses we’d tested showed peripheral illumination was OFF in the Exif data when mounted to a 5D Mk III.

I’d gotten an email and some pictures that morning from someone who complained their Tamron 70-300 VR did something quite similar so I mounted it to a 5D Mk III and took some shots. I hadn’t seen any problems when shooting that lens on a 5D Mk III, and the Exif data said, as it should, that peripheral illumination was OFF. Just for grins, though, we mounted the same lens to a 5D II and ‘Eureka!’ there was clearly some abnormal peripheral illumination in the jpg, and the Exif data on the 5D II screamed that Peripheral Illumination was ON in the Exif data.

And Then There was Grunt Work

After that it was a simple, if very time consuming, task to test every third-party lens on every camera. If Peripheral illumination showed ON in the Exif data we compared JPGs and RAW images to confirm that there was some peripheral illumination correction being applied. We could generally tell the difference easily, although sometimes it was pretty subtle. And some of the “ON” combinations involved crop-sensor lenses mounted to full-frame cameras, so they aren’t really important.

We tested most of the third-party lenses we carry on several different Canon bodies we stock. I’ve presented the results in the table below. If a lens-camera combination says ON in the table, then according to Exif data it was turned on even though the camera’s LCD menu said it had no data for that lens. When that lens is mounted to that camera, the camera is applying Peripheral Illumination Correction even though it has no data for that lens.

We confirmed that each of the lenses showing an inappropriate “ON” signal in the Exif data does have some odd illumination correction applied to in-camera JPGs, but not RAW images. It wasn’t usually as apparent as the Sigma 180 on Canon 5D III we’d seen originally. In several cases you really had to compare the RAW and JPG images to be certain it was there.

The image below, for example, is the Tokina 11-16 f/2.8 shot on a Canon 5D Mk II. It does show an odd illumination with the upper and lower center being lightened (the test chart in the picture is evenly lit to within a lumen across it’s entire surface). If this picture was a landscape you might not really notice it, or might just notice the darker edges and consider it vignetting. But if you shoot the same image in RAW and then convert it to JPG, or shoot it with peripheral illumination turned off, the chart appears evenly lit. 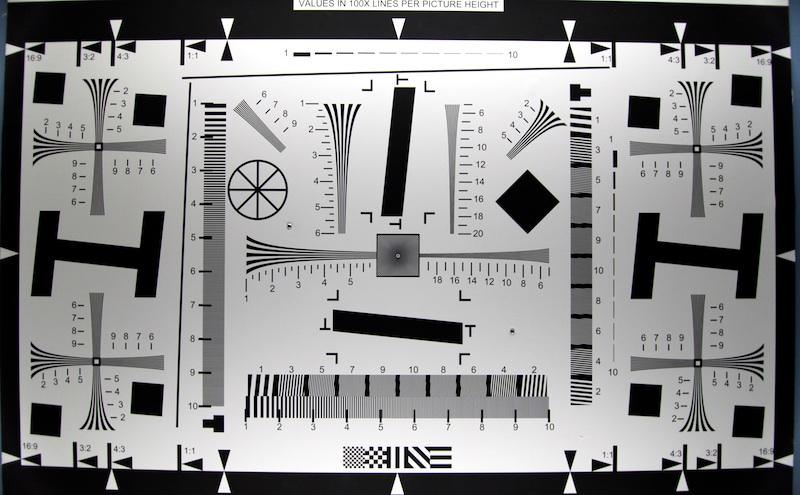 With all of the “ON” lenses in the table above, if you turn the Peripheral Illumination Correction off in the camera’s menu, the Exif data shows it is, indeed, off.

I only have gathered data for 4 of the Canon cameras, taking the opportunity of a recent firmware upgrade to compare the 7D with versions 1.2.5 and 2.0 firmware. If you don’t see a lens-camera combination you are interested in, please email me. Not as in ’email me and ask me to check it.’ Instead, download Exiftool and email me the results after you’ve done the test yourself and I’ll post it.

I am completely and totally done with this. I’ve removed Exiftool from every computer I own. I will never check this stuff again. Ever. Probably.

If you’ve been following the blog lately, you probably realize I have an amazing inability to stick to one subject for very long. But much of my interest lately has revolved around how cameras and lenses communicate during autofocus. This ended up being yet another camera-lens communication issue, and it’s a bit puzzling.

It doesn’t appear to have anything to do with the Lens ID the third-party lens uses. It changes from camera to camera. While we only have one example of a firmware upgrade tested, that didn’t change any of the 30 something lenses we tested on that camera.

I don’t even understand what the “OFF” signal is. If it was a simple code from the firmware of the lens, then I would expect one lens to have problems on all cameras. But not one lens has the issue on every camera tested.

So if some of you understand what’s going on better than I do, help me out and post a comment. I’ve found out what is going on. I would love to understand why.