The first Leica M Monochrome (I think everyone is calling it the Leica M-M; at least everyone around here) showed up today. Lensrentals became a tiny reflection of most online forum discussions regarding the camera, with half the employees saying, “Why would anyone want that?” and the other half drooling. My own opinion has vacilated between ambiguity and indecisiveness since it was announced. Being the only impartial person in the building, I decided I should do the initial evaluation.

Please don’t consider this a review; it’s not. Reviewers spend days carefully evaluating a camera looking for all its strengths and weakness. I spend a few hours with it, run some tests, get bored, and move on to the next thing. I don’t do reviews, I do first impressions.

In this case, it’s the first impression of a guy who shoots with an M9 occasionally, loves the great shots it makes, and hates that I still can’t focus it and miss 80% of the shots I take.

I’m a gearhead and resolution freak. Which means the first thing I did was take the MM and run it through Imatest with one of the better Leica lenses: the 50mm f/1.4 Summilux ASPH. The results surprised me a bit. I had thought that with no Bayer array there would be an increase in resolution. The Imatest results showed an increased resolution, but it wasn’t as large as I expected.

The difference between the two cameras was significant, but just barely so. In other words, you should be able to see a difference in a reasonably large print, but you’d probably have to look at them side-by-side to tell which was the MM and which the M9 (Assuming you made the M9 image black and white, of course. Otherwise the color thing would pretty much give it away).

Skipping ahead a bit, though, after we looked at the MM images it was obvious they showed a lot more detail than the M9 images. It didn’t take a side-by-side comparison to tell the difference; it was clear. That didn’t make sense given the numbers above.

So we went back quickly (because our camera turned into a pumpkin and went to shipping at 3 pm) and repeated some Imatest measurements using JPG images instead of RAW images. We’ve always tested RAW images because we want to minimize any artificial sharpening applied in-camera (even with sharpening turned off, most cameras still apply some). Other testers use JPGs because they want their tests to reflect what you actually get from the camera’s JPGs. Neither way is right or wrong, it’s just two different ways to do it.

But it occurred to me that perhaps Imatest’s raw converter was applying a demosaic algorithm for a Bayer filter that wasn’t there that might make the results of the test show a lower resolution. So we repeated Imatest using in-camera JPGs with the Leica 35mm f/1.4 ASPH II.

As with the previous tests, the MM RAW is a bit better than the M9 RAW. But the MM JPG is hugely better than the M9 JPG. I think that perhaps the DCRAW converter used by Imatest to provide a level playing field for all cameras is messing up the MM files when converting them for testing. It’s also possible that the MM files can be sharpened in-camera incredibly more than M9 files (despite setting everything to not sharpen them).

The bottom line, though, is that this time the non-gearheads are right: throw away the numbers and go take some pictures.

I won’t bore you with any testing numbers here. We have the “Roger’s favorite bad lighting test” here at Lensrentals. It’s pretty simple — we aim a 500 watt halogen light at a 30 degree angle to a couple of shelves full of antique lenses and books. It creates all kinds of glare and shadow areas with objects ranging from flat white to nearly black. 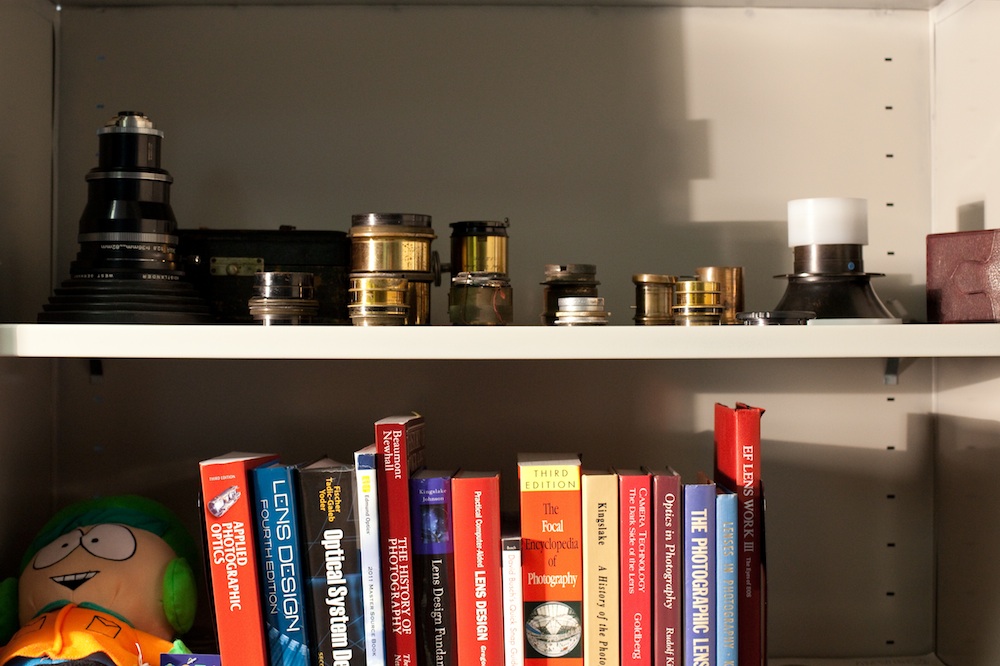 All were shot at f/5.6 but as you can tell from the closeups that wasn’t enough depth of field to make the vagaries of focus identical. The only point worth taking away (and it is worth taking away) is that the M clearly has less noise and better clarity at ISO 3200 than the M9 does at 1600. Whether it’s better than the Canon or not I don’t think is important. It’s clearly in the same vicinity and maintains at least as much detail. That’s a big change compared to the M9. 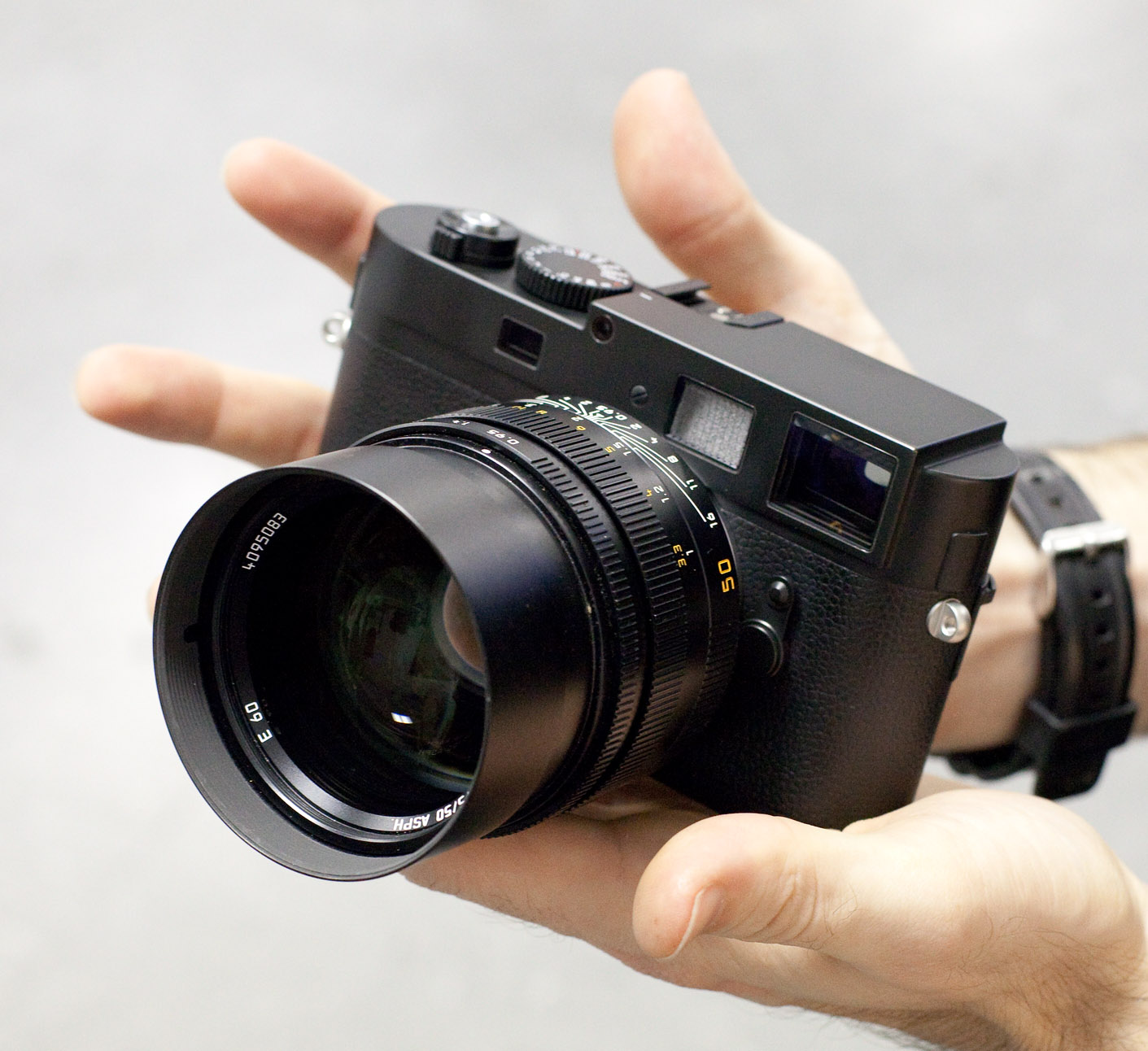 The well-dressed MM wearing the Leica 50mm f/0.95. Just the thing for casual shooting around an industrial park.

I would love to have arranged a DigitalRev type swimsuit model session to test the camera out. But they’ve got a lot more free time than us. So Aaron and I walked around the scenic industrial park and warehouse we call home on our lunch hour and took some shots. 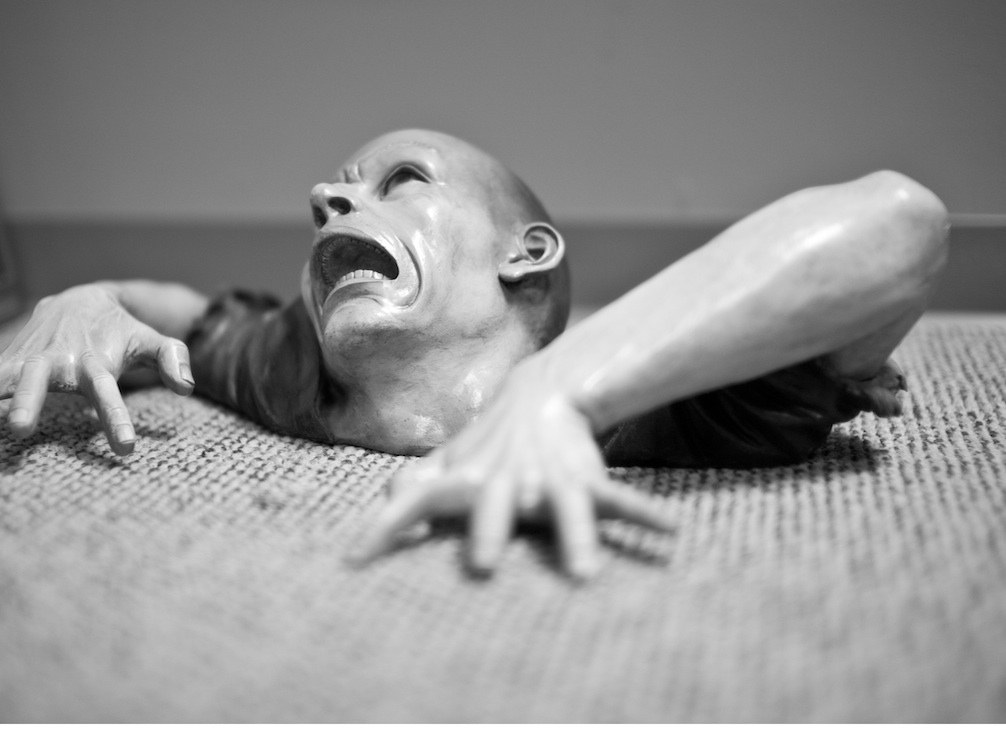 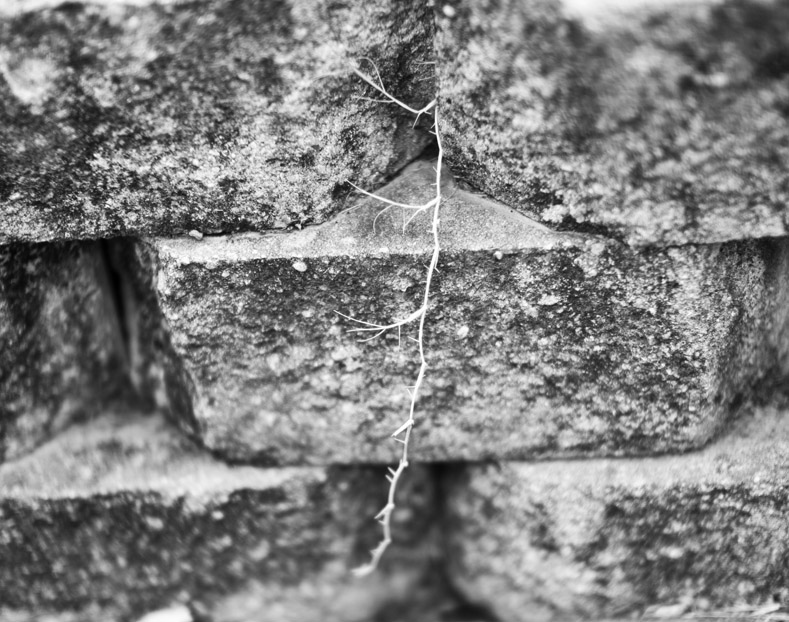 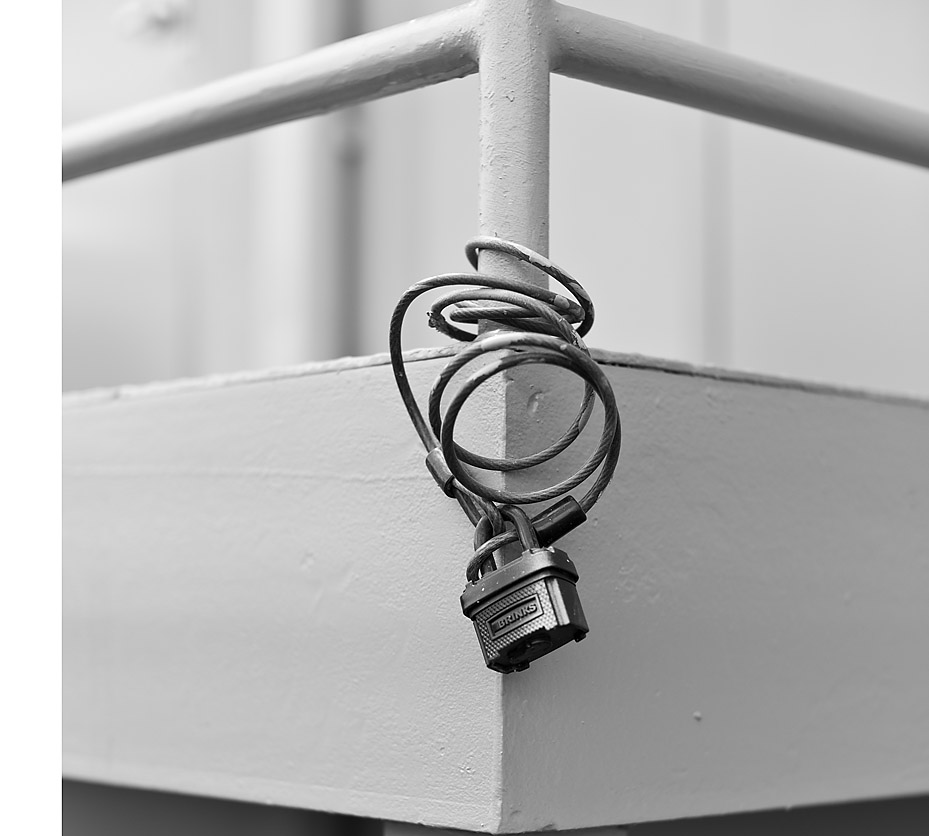 Could we have made the above images with some time in Channel mixer and an M9 file? Maybe. The small online JPGs don’t show it, but the amount of detail is much more than I’ve gotten from M9 images (It was the amount of detail we were seeing made me really question the Imatest results).

And we certainly couldn’t have taken this shot of the top of a cabinet in an unlit corner of a workroom with an M9. Because it’s shot at ISO 10,000. 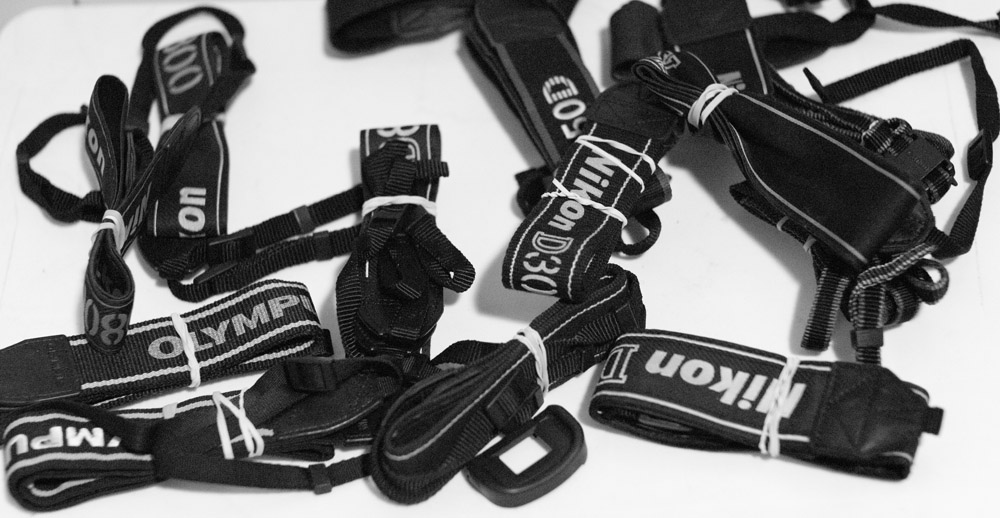 If you’d like to pixel peep the noise in this ISO 10,000 image, here’s a 100% crop of a strap with both shadow and white table top so you can see noise at both ends of the luminance range. 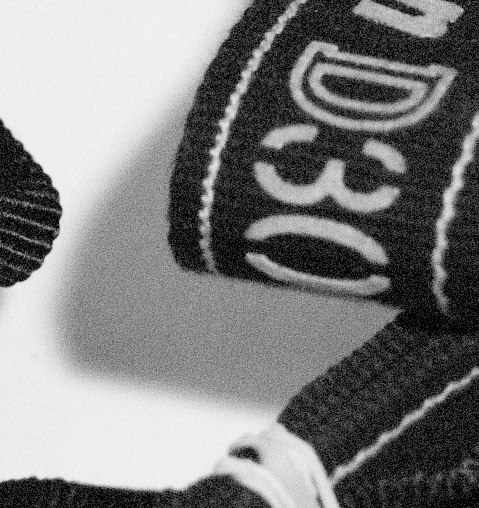 There are some SLRs (not all of them by any means) that can do this well at ISO 10,000. There aren’t any that I can say are just absolutely better, though.

So What Did I Think?

Well, if you’re asking me would I buy one, the answer is no. I’m not buying an M9 either. That’s because I still can’t focus a rangefinder accurately and consistently (It’s not just lack of skill, it’s a vision problem, too. But lack of skill certainly contributes.). If I was buying one of them, though, it would be the MM, no question. I’d give up color for the resolution and high ISO performance in a heartbeat.

For the kind of shooting I do, there will always be something else I’d rather spend $8,000 on.

But will I take it out and play with it? Abso-damn-lutely!!! The images are awesome. I’ll only hit focus on 1 out of 10, but that one will be a good one. Now I can actually take it out for night  street shooting, or to a party. Or in broad daylight. Did I mention I really like the images? OK, I guess I did.

There’s a rule that whenever you write about anything Leica, you have to work in the words “it has that Leica look” somewhere. This camera has a unique look, seriously. I don’t have the black and white film background to say it looks like this or that. I’d call it Black and White meets HDR. It’s very attractive, whatever it is. I do a lot of black and white conversions and I can’t say I’ve ever achieved exactly this look. If I had I’d have been bragging about it.