Finally Got Around Touit

I was lucky enough to be invited to New York for Zeiss’ Touit lens release and they were kind enough to loan me a 32mm f/1.8 lens in Sony E mount to experiment with. Unfortunately being away during our busiest repair season got me behind and I’ve only just now had a chance to experiment with the lenses a bit.

This is more speculative than what I usually write. Generally I wait until we have multiple copies to run Imatest, look at sample variation, etc. In this case, though, it became apparent that when we do get full stock in, it’s all going to go right back out on rental since there’s already a waiting list. So I thought it would be worth investigating the single Zeiss 32mm f/1.8 copy we had.

I don’t want to repeat what everyone already knows, but there are a couple of points I think need emphasis:

1) The Touit lenses are going to be slightly different in Sony and Fuji mounts. The Sony’s have electronic apertures, the Fuji’s mechanical. The optics may vary a bit, too. Differences in flange-to-sensor distance and Fuji’s raw manipulation account for that. I mention it because you should look at reviews of the lens in the mount you are interested in. This is about the Sony E mount because, well, that’s what they loaned me.

2) These are autofocus lenses. The AF system has a DC motor, not an ultrasonic motor. It works well, but it makes a bit of noise which would probably make it a poor choice for video. It’s not a horrid noise by any means, lower pitched and much less buzzy than DC motors in other lenses I’ve used, but it’s noticeable when things are quiet.

3) The manual focus ring is fly-by-wire. Turning the MF ring actuates the DC motor, not a mechanical linkage. It’s one of the better implementations I’ve seen and I had no trouble focusing accurately (much better than, say, the Canon 85mm f/1.2). But again, video people pulling focus will have the electric motor making noise in the background.

4) These two lenses will be followed by a 50mm macro lens in the fall. There will be some other lenses in 2014 and at least consideration is being given to a zoom lens.

5) There are no immediate plans for Micro 4/3 mount Touit lenses. 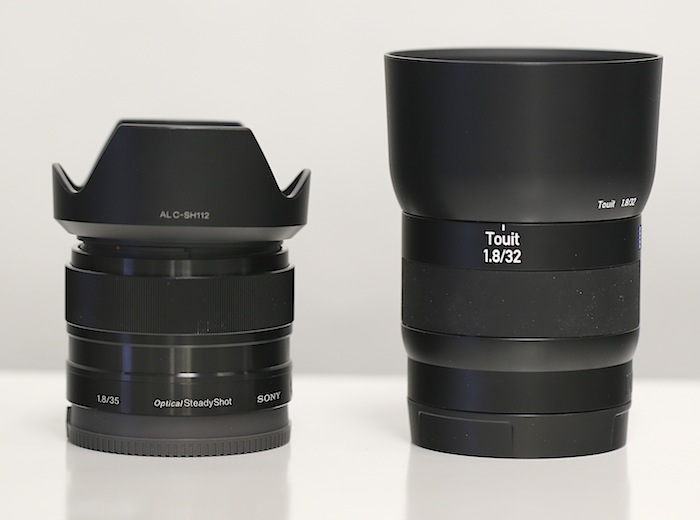 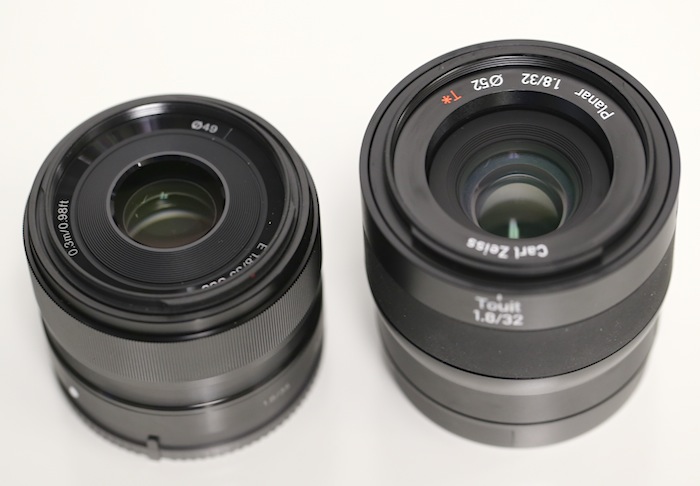 First, I always try to say what my point of view is when I start a post, because I know it influences my opinions to some degree. I’ve made no secret I consider the NEX system to be one of great cameras with generally poor lenses.

For this test I looked at the Touit 32mm f/1.8, partly because I liked it better, partly because the Sony 35mm f/1.8 OSS provides a good comparison point. I consider the Sony 35mm to be a good, but not great lens (although it’s one of the better NEX lenses). It’s reasonably sharp wide open, becoming quite sharp around f/2.8. I like the OSS and price is excellent.

The Sigma 30mm f/2.8 E-mount lens provides a third option in this approximate focal length. It doesn’t have as wide an aperture, but it is does have an amazingly low price tag.

Just shooting around with the 32mm Touit I was impressed, particularly by center sharpness and particularly stopped down just a bit. I also loved the close focusing distance (1.2 feet minimum) that let’s it almost be used as a pseudomacro with a 1:9 maximum magnification. Wide open, I wasn’t blown away by it, but stopped down it was awesome.

Close up the 32mm Touit is wonderfully sharp

Even viewed as a 100% pixel-peeping crop

I want to point out that these results are from a single copy of the 32mm f/1.8 Touit, not my usual multiple copies, because we don’t have stock yet, just the one loaner copy Zeiss was kind enough to provide us.  I see nothing that makes me think this copy is out of sorts, but until we test multiple copies we don’t know that this one is representative.

I compared it to a group of 5 copies of the Sony 35mm f/1.8 OSS lens (since we hadn’t tested that one before I thought it best to go ahead and get reliable results now). The Sony 35 had an interesting sample variation: all copies had a slightly soft corner. Just one corner. Not the same corner. But always one. It wasn’t awful by any means, but MTF values in 1 corner were always 20% lower than the other 3 corners.

We’ll start with the MTF50 graphs for the Sony 35mm f/2.8 OSS, which as I mentioned, is a pretty good lens. 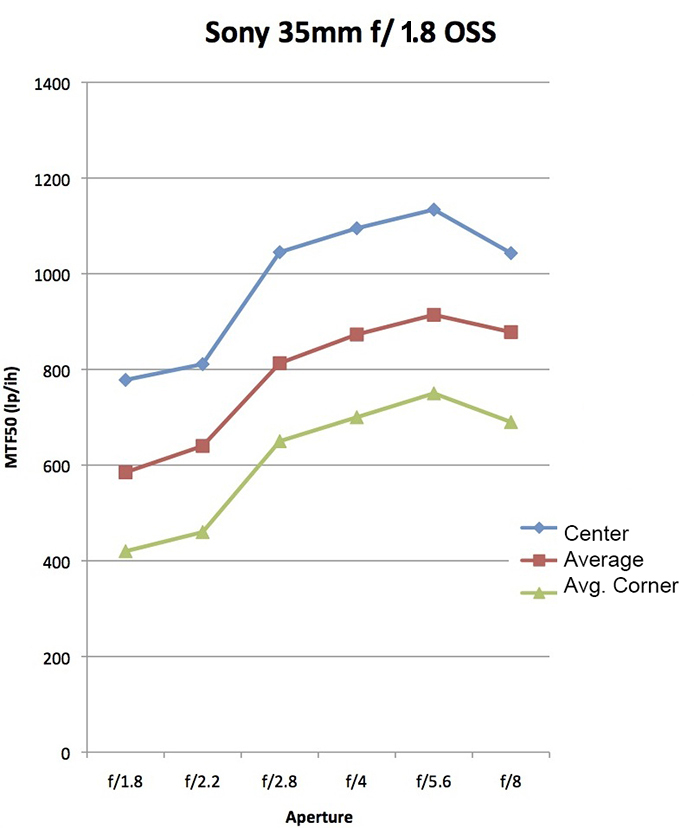 Imatest results for the Zeiss Touit 32mm were even better. 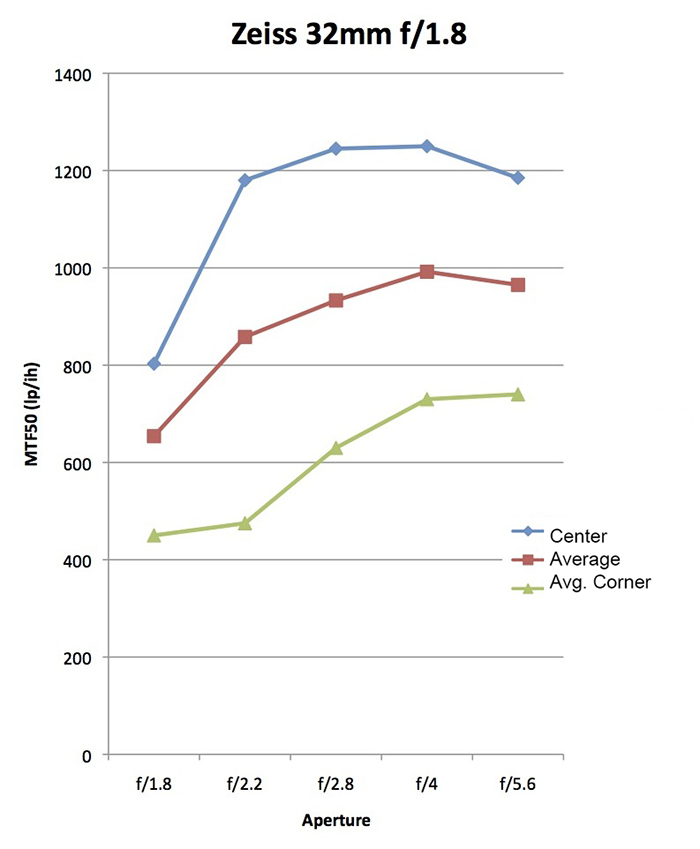 At f/1.8 the results were similar to the Sony 35mm, with MTF50 of 800 in the center and 630 average. The Touit sharpens up more quickly, though, having MTF50 results at f/2.2 (1190 center, 830 average) that are much better than the Sony. AT f/2.8 through f/5.6 the Touit has significantly higher MTF50 than the Sony. I had mentioned online that wide open I thought the Sony and Touit were fairly similar, but that stopped down just a bit the Touit was clearly resolving more. These numbers support that.

I should mention also that the Sony lens, even on the NEX-7 does not reach maximum resolution until f/5.6, while the Touit maxes out at f/4. The Sony exhibited less distortion, with 0.5% barrel distortion compared to 2.1% for the Touit in our tests.

It has been stated the 32mm also has a lot of field curvature, but we didn’t see this in our testing. Corner sharpness was not improved greatly by corner specific focusing. Our tests were done at about 13 feet shooting distance. Things may be different at other shooting distances.

This is a great example, I think, of why test numbers are just one thing to consider in choosing a lens. According to the test results, if you want the best bargain and shoot at f/2.8 or smaller, the Sigma 30mm f/2.8 for $200 is just about impossible to beat.

The Sony 35mm OSS gives you slightly better performance optically, a wider aperture, and image stabilization for $449. At f/1.8 it’s pretty equal to the Touit in resolution and has less distortion.

Stopped down just a bit, to f/2.2, though, the Touit gives much better optical performance than any of the other lenses – numerically and by the eye test. Worth $900? To some people certainly. To others, not at all.

For me, taking actual pictures with it confirmed what the numbers suggested. The center resolution is probably the best I’ve seen from any lens on an NEX camera. That’s enough to make it a future purchase for me.