Sigma has been releasing one great lens after another for a while now. Some, like the 35mm f/1.4 and 18-35mm f/1.8 zoom, have created feeding frenzies soon after (or even before) their release. Others, like the 24-105 f/4 OS, haven’t created a whole lot of fuss. So I thought we would do a little optical testing and make the logical comparison between the classic Canon 24-105mm f/4 IS and the new Sigma 24-105 f/4 OS.

As usual, this is not a complete lens review, just a simple resolution test on several copies of each lens. One thing we’ll do with this test that we haven’t been doing a lot — we’ll test the lenses both with Imatest and also on an optical bench so we can compare performance both at infinity and at closer focusing distances.

Not surprisingly, the two lenses are fairly similar, although the Sigma is heavier and takes a larger front filter. I gave a range for the Canon price because while the list price is still $1149, it seems to be on special constantly. You might not always find it for $799 but you can usually find it for well under the list price.

The optical design of the two lenses is quite similar, too. The Sigma has a bit more exotic glass and has a more complex rear group. 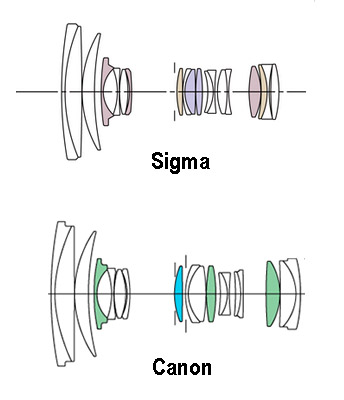 Four copies of each lens were run through our Imatest lab. These copies were selected from our stock, all of which had been previously tested for centering and optical adjustment. Imatest was run at 24mm, 50mm and 105mm focal lengths on print (as opposed to transparent) SFR Plus charts. Testing distances were 7 feet for 24mm, 15 feet for 50mm, and 17 feet for 105mm (different chart sizes used), and were performed on a 5D Mk II body.

I’ll start with a summary chart showing the results for each lens at each focal length tested. Center, weighted average (horizontal and vertical readings at 13 positions), and corner (average of all 4 corners, horizontal and vertical) are listed. The number in the table is the average (mean) of that reading for the 4 copies tested.

One other thing that the table shows is that the Sigma has a bit less distortion than the Canon.

Before you start dissecting those averaged numbers, let’s look at a graph of the individual lenses. Remember, these are all selected from a pretested group so none are decentered, but sample variation in a 4x zoom is a very real thing.

(Just because someone always asks, one copy isn’t necessarily better than another. One is a bit better at the long end, another at the wide end, one has slightly better centers but slightly weaker corners, etc. Whenever someone asks me to select a ‘best copy’ of a zoom, I tell them those have to be delivered by a Leprechaun riding a Unicorn.) 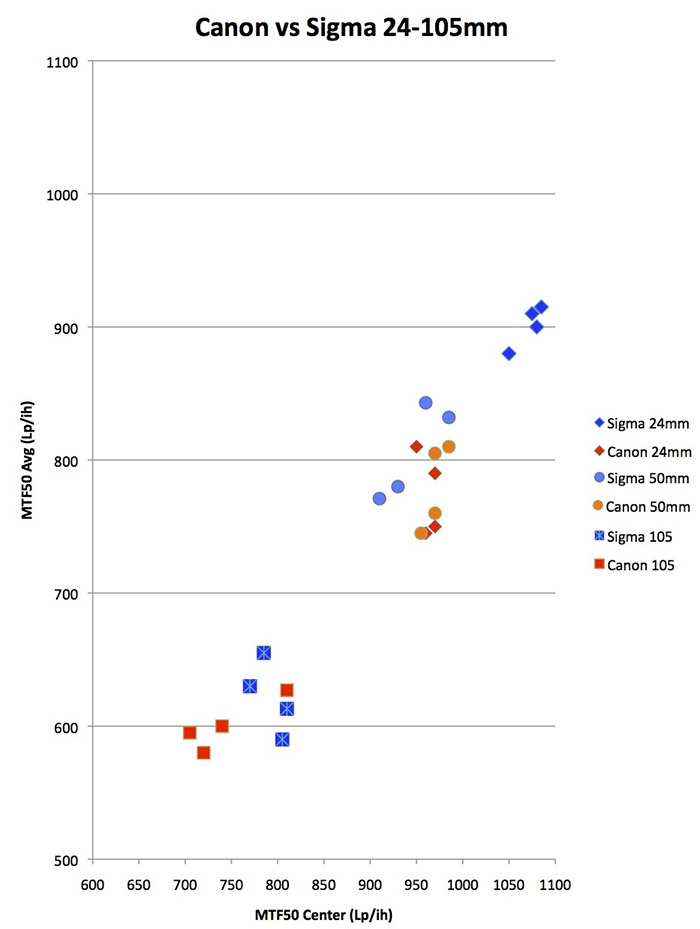 There is one (probably) significant resolution difference between the two lenses: the Sigma is sharper at 24mm. How much sharper? Not as much as the decrease in sharpness at 105mm for both lenses, but probably enough to notice. Or looked at the other way, if you don’t notice the difference in sharpness between 50mm and 105mm, you sure won’t notice the increase at 24mm.

But the difference is real and if you pixel peep you might notice the Sigma is a bit sharper than the Canon at 24mm . . . except . . .

Computer target analysis (Imatest and DxO) has become the standard for internet lens testing and reviews: they’re relatively simple, affordable, and give a lot of information. But they have a limitation that sometimes worries me — because of chart size limitations wide-angle lenses have to be tested fairly close to the chart. In the case of a 24mm lens the testing is done at 7 feet (and that’s with the largest Imatest chart available).

So I thought this would be a good time to repeat the tests using our Wells Optical Bench. Optical benches have some limitations too, but they test the lens at infinity. In this case the optical bench tests show one difference compared to the Imatest results.

The images below are optical bench print outs for one example of the Canon and one of the Sigma lenses at 24mm (we tested them all, they all are very similar). 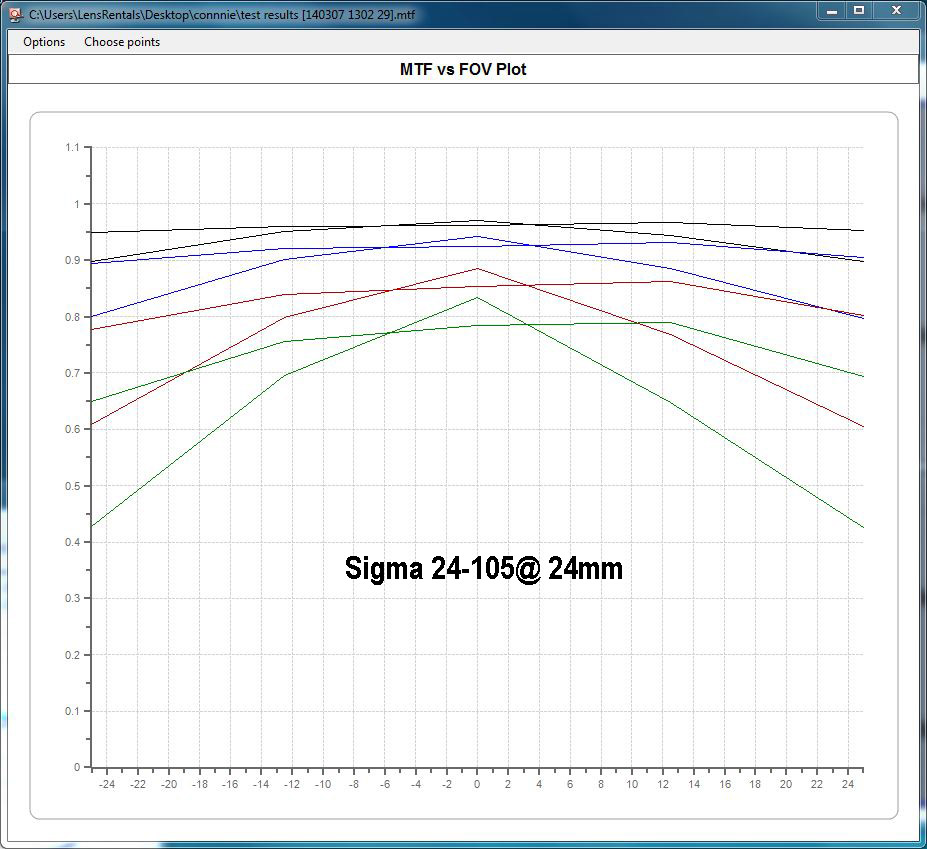 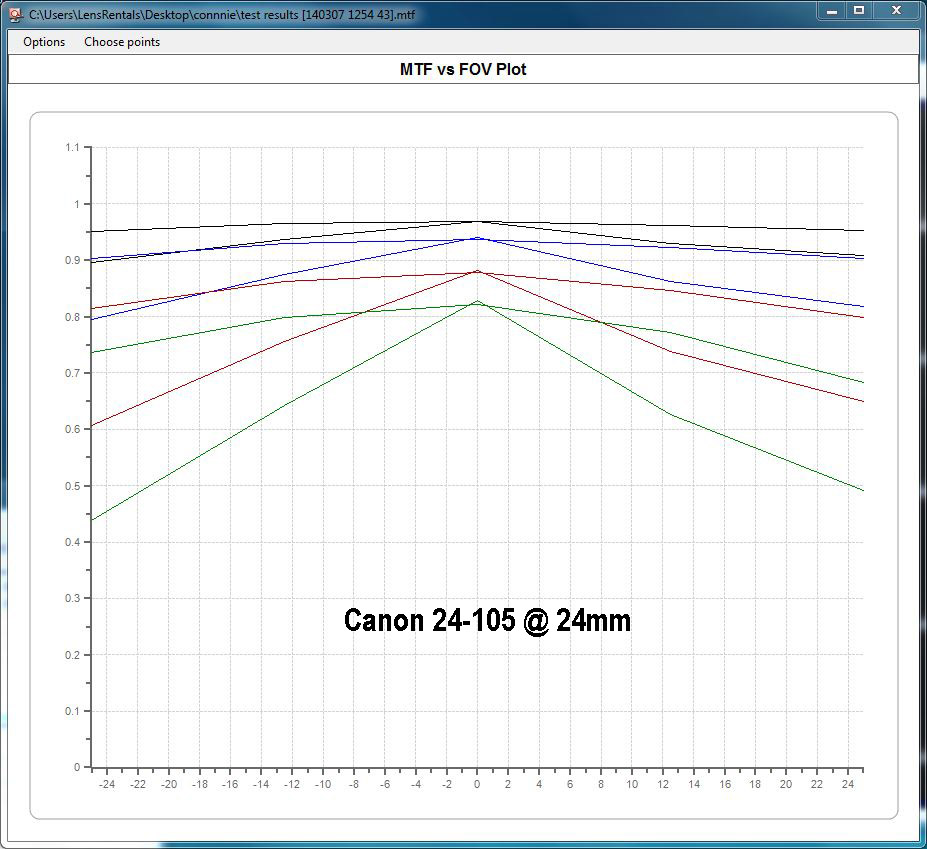 The black, blue, red, and green lines represent MTF10, 20, 40, and 60 with values on the vertical axis. The horizontal axis shows degrees from the center of the lens. There are two lines of each color, showing tangential and sagittal rays. The difference between the two lines of the same color shows the amount of astigmatism.

Optical bench printouts can be a bit confusing when you aren’t used to them, so I’ll summarize a bit. Notice first that the Canon has no astigmatism in the center. The Sigma has a bit of astigmatism in the center, zeroing out about 4 degrees off center. (Note: all the copies tested for each lens showed the same pattern. This is the way it was designed. There are advantages and disadvantages to it.)

If we take the Optical bench values for the 4 copies at 24mm and put them in a table, it’s different than what we saw with Imatest.

There are some minor differences between the two lenses at 24mm at infinity (the Canon actually has slightly higher numbers, but the difference is completely insignificant). I won’t bore you repeating the optical bench tests at 50mm and 105mm. They were identical.

Sigma has made a very nice zoom here at a very good price. It’s obviously not going to create the stir that occurred with their 35mm f/1.4 or 18-35 f/1.8 lenses, but it’s a nice addition to their lineup.

Canon shooters who have a 24-105 f/4 IS have no reason to change based on optics as long as the promotional pricing remains in effect. The Sigma and Canon 24-105s are nearly identical. Similarly the Nikon 24-120 has been available on discount lately, so I don’t see a big motivation for Nikon shooters to change, either.

Of course, if the pricing changes I wouldn’t hesitate to buy the Sigma instead of the name brands. If nothing else, I think the presence of the Sigma will keep Canon and Nikon prices reasonable.

I expect as this lens is released in other mounts it will be quite popular. There’s a reason Canon has sold about 3 gazillion 24-105s. It’s a very good lens with a very useful range. The Sigma will be available for Sony shooters next month and may be the best option in that mount.

I’ll repeat the more general point in the conclusions, though, because I think it deserves repeating. When you look at computer-target test results remember they are valid at the distance tested. With wide-angle lenses, particularly, that doesn’t mean those results are valid at longer focusing distances.

I’ll add that it’s about time testing and review sites start adding the testing distance when they write their reviews. With 16mm lenses, for example, test results are generally at 4 feet. Those tests may not mean a lot when you’re shooting landscapes at infinity with that lens.

Tweet
Posted in Lenses and Optics
Examples Using an Optical Testing Station
The Sky is Falling and the Light is Leaking: the A7r Anti-Massacree