As most of you know, we generally test multiple copies of a lens when we evaluate it, simply because we are so aware of copy-to-copy variation. But I got caught between a rock and a hard place this week. We received exactly one copy of the new Nikon 300mm f/4E PF ED VR lens and the purchasing department told me it would be at least a week and probably longer before any more come in. But I’ve been dying to know how it measured up against the existing Nikon 300mm f/4 ED AF-S lens.

So I did what I had to do and ran the one copy through Imatest, comparing it to a batch of several copies of the older model. We used the new high-resolution, backlit film charts that we’ve been using for telephoto lens test lately, and shot all the tests on a Nikon D810 test camera so we would generate the highest possible resolution.

I always like to mention my expectations going into testing. The existing 300mm f/4 AF-S is a very, very good lens. The new PF ED VR brings a lot of new technology to the table, and we know from experience with Canon that Phase Fresnel (what Canon calls Diffraction Optics) technology has historically not give the resolution that a good optical lens does. On the other hand, Canon’s second generation DO lenses seem to be every bit as good as their standard optical telephotos. So I hoped the new lens would be optically as good as the old one, but wouldn’t be shocked if it were a bit better or a bit worse.

Even if it wasn’t quite as good optically, the PF ED VR has a lot of attractive features: an excellent VR system, a tiny size, better coatings, and an all electric aperture system with no mechanical linkages. (Most of you won’t consider the latter a great advantage, but most of you don’t work on lenses for a living.)

For emphasis: this is somewhat of a failed test. The results we got for the 300mm f/4E PF ED VR lens are good, but other copies may well be better. I’ll speculate on how much better, but until we get more copies, that’s all it is, speculation.

A Quick Look at the Lenses

The side view shows at a glance just how much smaller the new 300mm lens is. It can’t show you the weight difference, but the new lens, at 1.66 pounds, weighs about half as much as the original version. 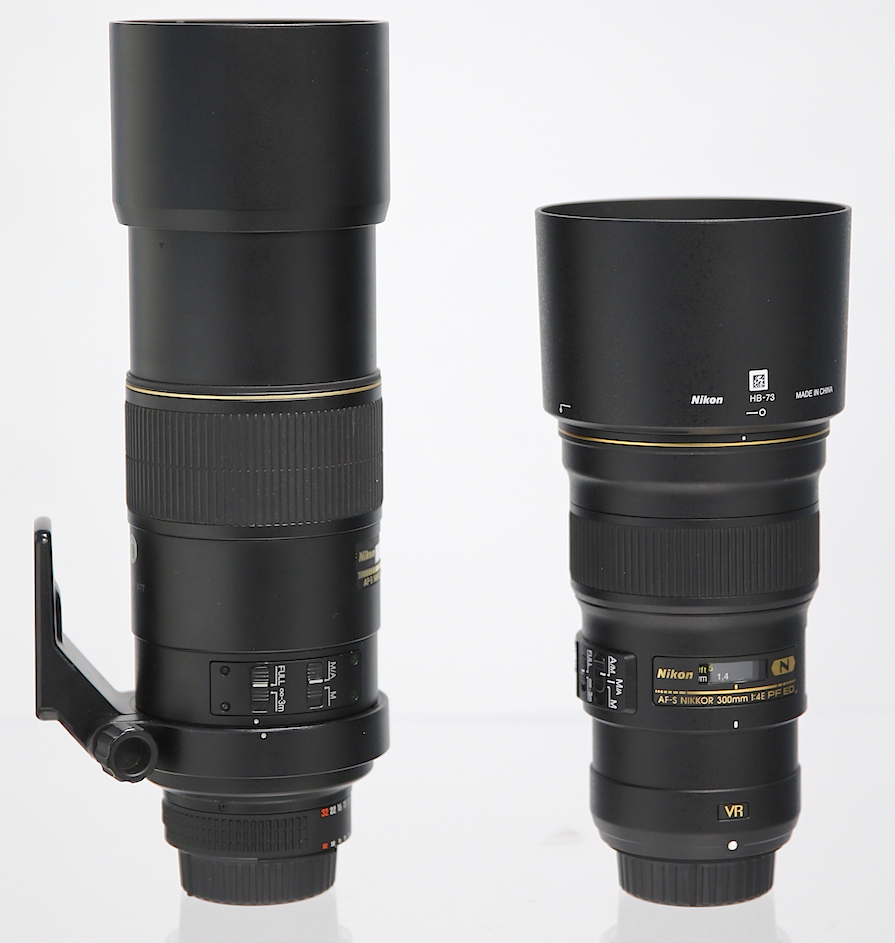 The view from the mount shows that, like the other “E” lenses, there is no mechanical aperture lever. The aperture in this lens is completely electronic. 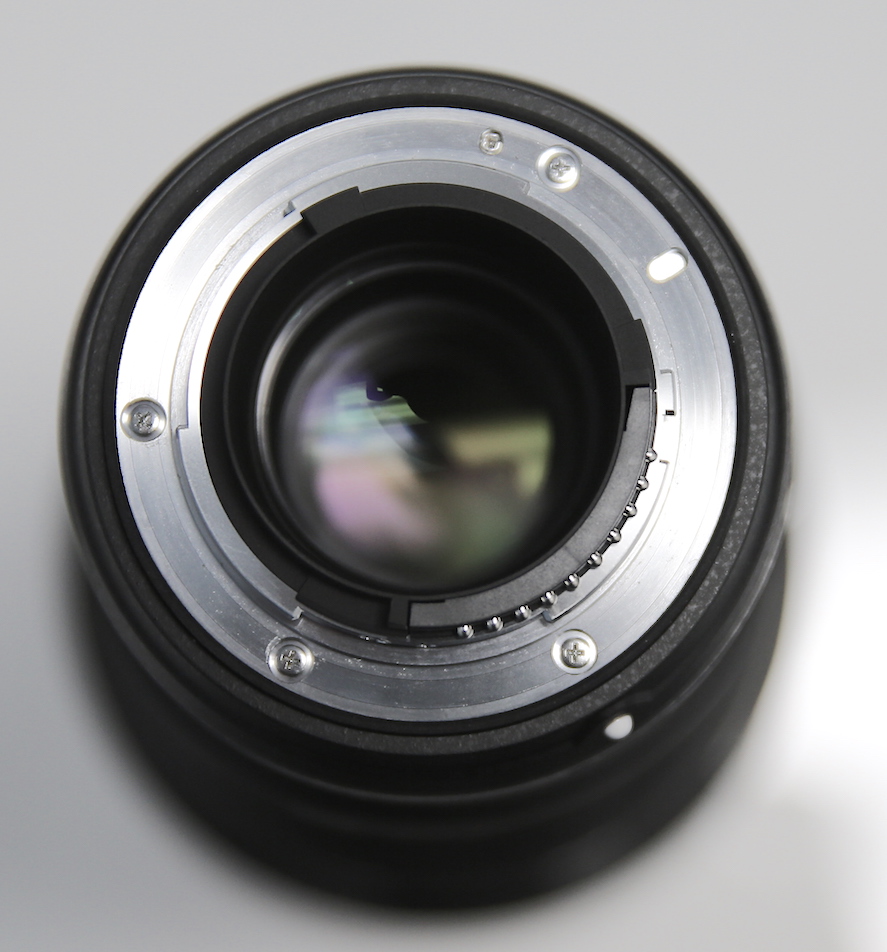 Below is a simple table showing the Imatest results as we usually present them: Center point, Weighted average of 50 points across the front of the lens, and average of the 8 corner results (4 horizontal, 4 vertical) given in Line Pairs / Image Height from unsharpened raw images.

The results seem somewhat straightforward at first glance. The new lens is a bit sharper in the center, not quite as sharp in the corners, but the two lenses are very close in resolution. Certainly with only one copy of the new lens tested I wouldn’t want to say more than ‘equivalent in resolution’ to the original version. It’s advantages in size and VR speak for themselves. I’d want one if I shot at this focal length a lot. 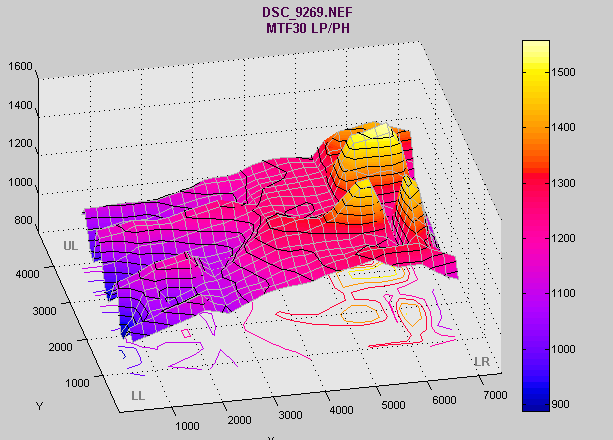 There’s more to it (or at least there should be more to it) than just letting the computer spit out numbers. When we look at the actual graphs of the Imatest results, the 300mm f/4E PF VR graphs all show the sharpest point not near the center of the lens, but off to the right side of the image. It looks like the lens is slightly decentered or tilted. This isn’t bad, by any measurement, but it’s noticeable.

Our Imatest set-up self-checks to be certain we are correctly aligned, but just to be sure we tore it down, set it back up, and got similar results. We then put the lens on OLAF, our 5-micron-pinhole-collimator testing machine, which confirmed the lens was just slightly decentered. 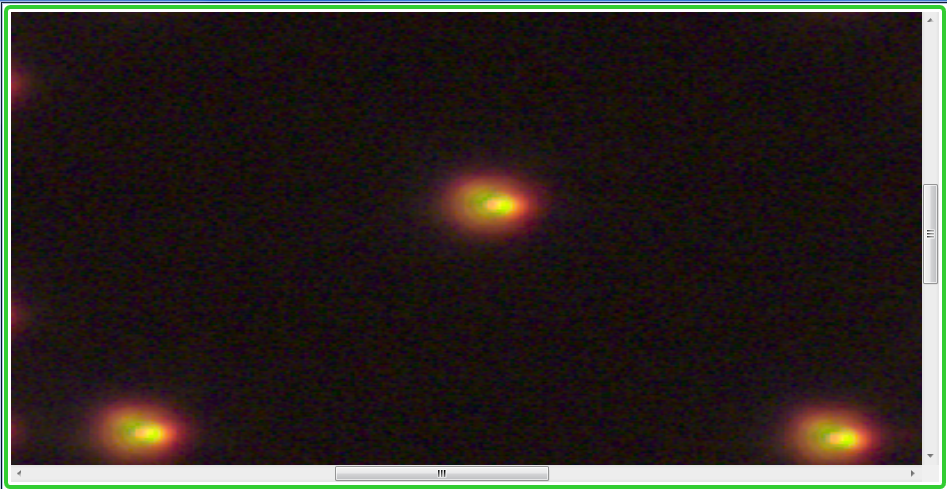 If you look carefully it’s apparent that the rings for each dot are not perfectly symmetrical; they’re slightly shifted to the left. Again, this isn’t a horrible result by any means. A really bad lens would be smeared 300% or more times on one side compared to the other, this is not bad at all.

What Does That Mean for the Results?

I’m going to speculate here, because we don’t have experience with decentered Fresnel lenses. When we get another half-dozen copies we may find they are all just like this – that a slight degree of decentering doesn’t affect the lens at all. (There are several lenses like that, where every copy is slightly decentered and the resolution is just fine.)

We may find that a well-centered copy is far superior to this one, particularly in the corners, but perhaps even in the center.

What we can say is that the new lens is at least the equal, from a resolution standpoint, to the old lens. That’s about all for now.

When I get a half-dozen copies in and tested, I’ll be able to say a lot more. What I suspect I will find is the center resolution after testing multiple copies will be about what it is here — just slightly better than the original 300mm f/4 AF-S. I think that because our maximum resolution point, while off-center, was not up near the edge of the image. My experience is that the center resolution won’t change much on a well-centered copy, it will just return toward the center of the image.

I expect we will see somewhat better numbers in the corners, and therefore in the overall average of the lens, probably making it slightly better than the original lens in all areas. Not greatly better, possibly not enough that you’d even notice it in a photograph. But at least as good, in a much lighter lens with excellent VR. That will definitely make this a worthwhile purchase for a lot of people.

The real bottom line? Testing one lens creates about as many questions as it does answers, at least for an OCD guy like me.