Just the Lenses: The Great 200mm Shoot Out

For those of you who haven’t read our ‘Just the Lenses’ posts before, these take advantage of our Trioptics Imagemaster optical bench to compare lenses from different camera mounts with no camera involved. Why is that different? Because all other forms of testing (DxO, Imatest, or even photography) tests the camera-lens combination. Sensor architecture, micro lenses, in-camera image processing and other things affect those results. A third-party lens on a Canon 5DIII will have different results than the same lens on a Nikon D800 for example. 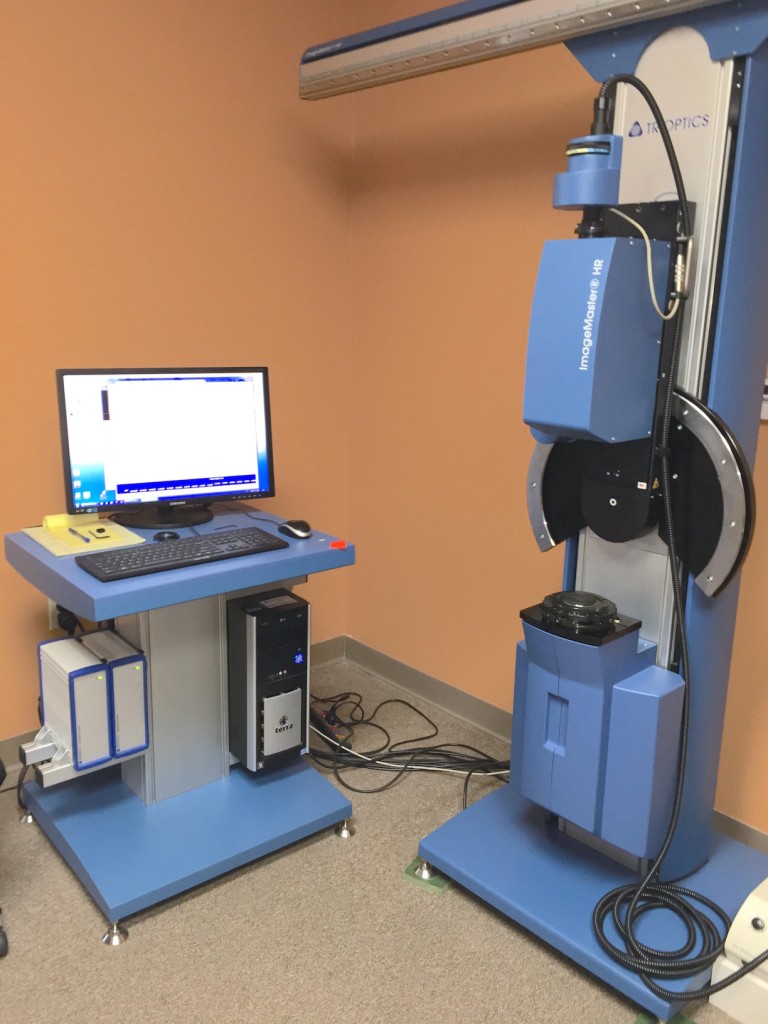 Since we’re into optics, we like testing just the lenses themselves, eliminating all of those other variables.

The 200mm focal length is one that people use frequently, whether for action photography, long portraiture, or as a short telephoto lens. There are a lot of different ways to get there, too. Most people use a 70-200 zoom lens. A few use a 200mm prime. And if you shoot Canon or Nikon, at least, there are both name brand and third-party options to consider at that focal length. So testing all of the lenses that can shoot at f/2.8 and 200mm for those mounts seemed like a fun idea.

We stock a lot of lenses that can shoot at 200mm and f/2.8 aperture for Canon and Nikon mount cameras:

We tested each of these lenses at f/2.8, 200mm at infinity focus distance (another advantage of the MTF bench is that it tests at infinity, not at 20 feet or so). For each lens we tested 5 copies, and each copy was tested in 4 quadrants. The MTF results were averaged (we ended up with 20 readings for each lens). All lenses were checked for proper centering on OLAF, our 5-micron pinhole collimator prior to being tested. 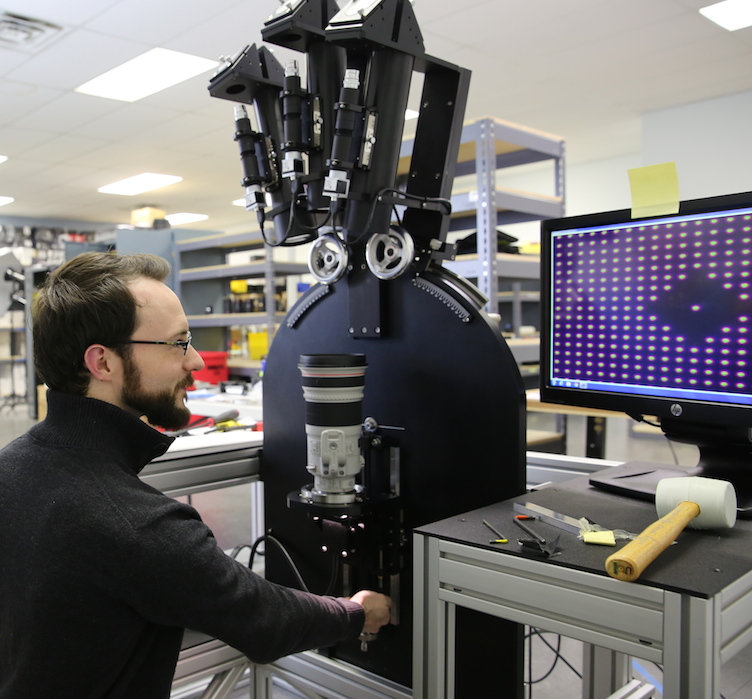 So What Did It Show? 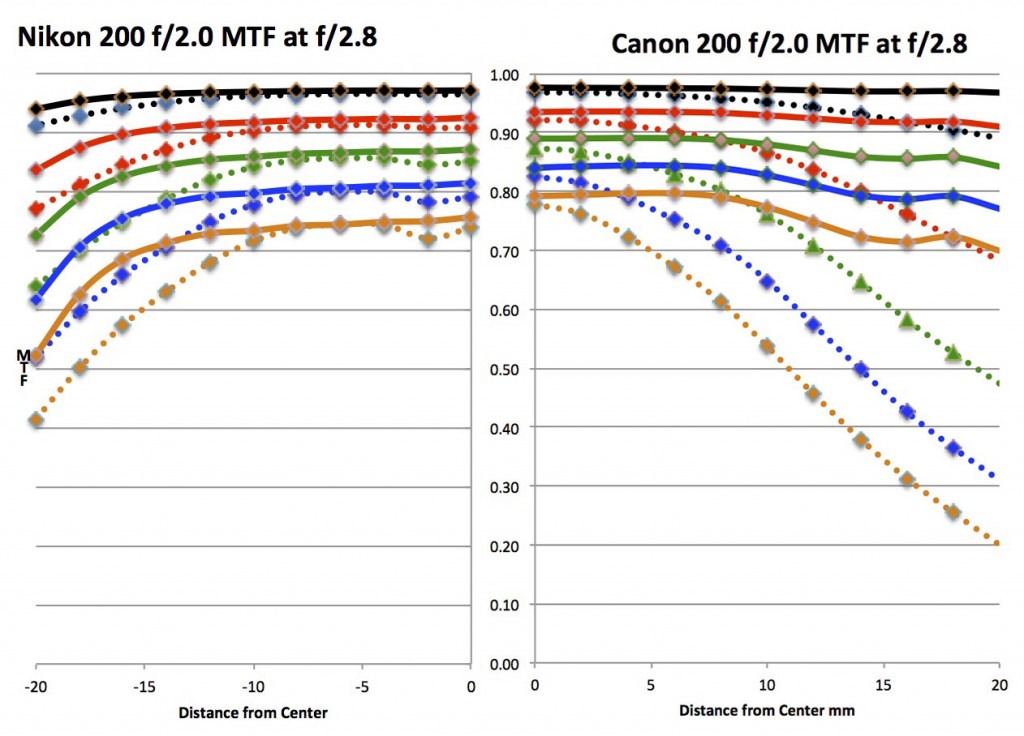 Notice I’m not exactly letting the suspense build up here, am I? 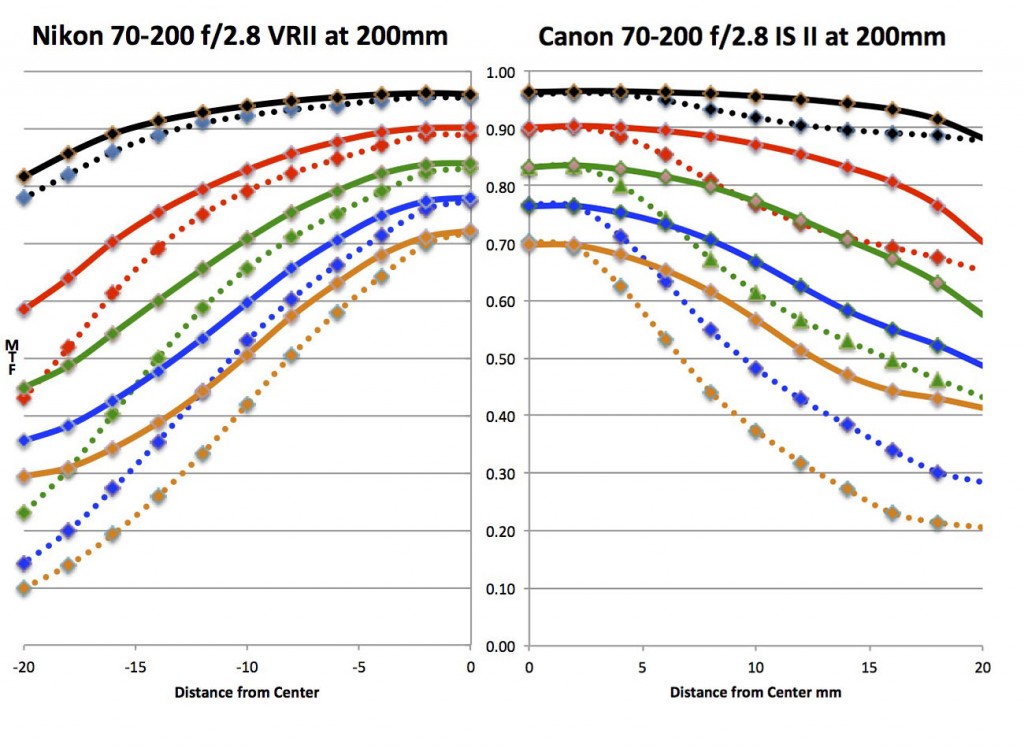 Again, the minor differences are just hair splitting. The Nikon has a tiny bit better high frequency resolution in the center, the Canon is just a tiny bit better in the edges and corners. Not that you could tell any of this in a photograph, the differences are really small. These are widely considered two of the best zoom lenses made and the MTF graphs back that impression up.

Speaking of the best zooms ever made, let’s flip the graphs around and (assuming you were going to shoot them at f/2.8) look at how well the MTF curves of the zooms compare with the equally legendary f/2.0 primes. Although let me be clear, there’s a lot more to the differences in the prime and zoom lenses than just MTF. 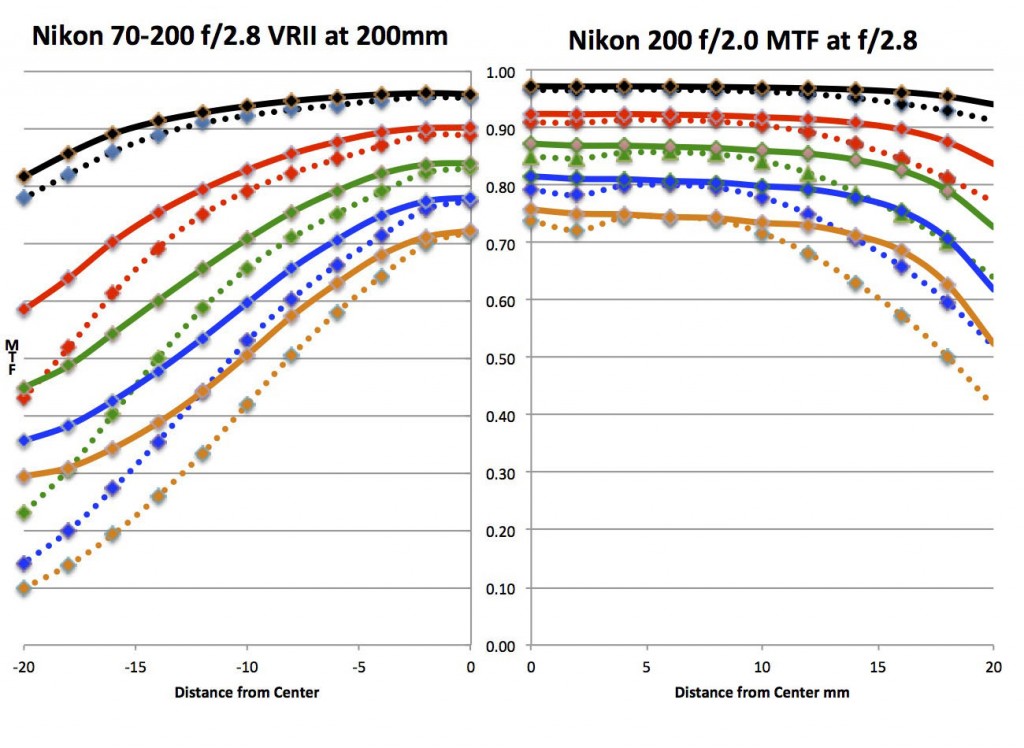 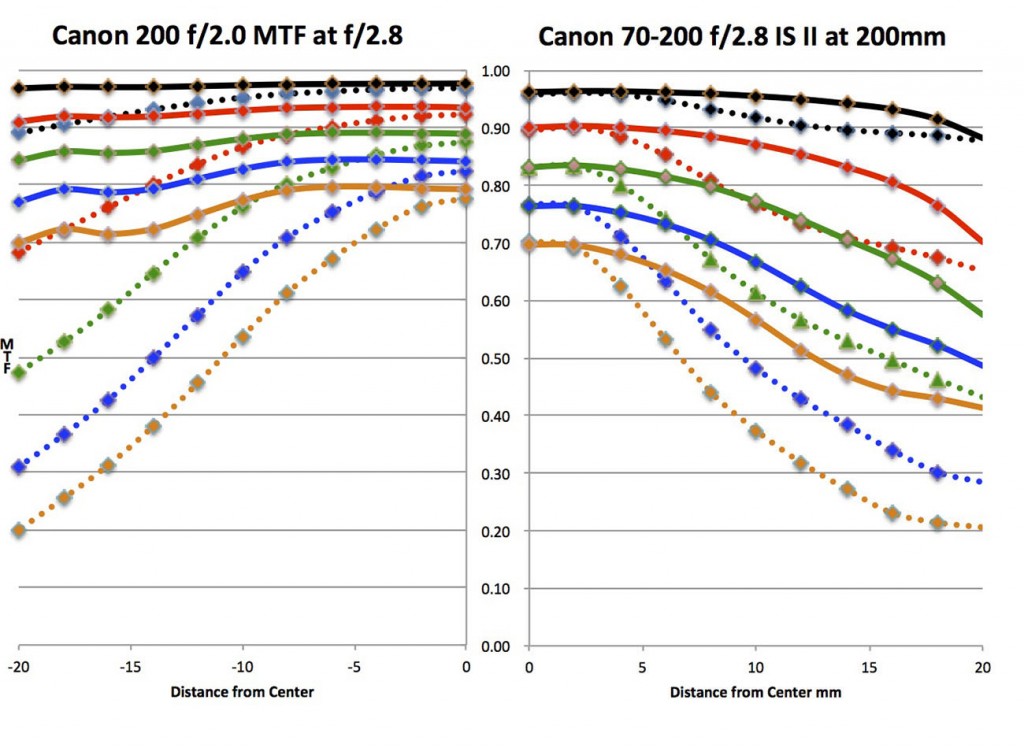 Well, my comments are just stating the obvious. There’s a reason people wax poetic about their 200mm f/2.0 lenses. They are spectacular. But the zooms are damn good.

Here’s an example of how good, we’ll compare the Canon 70-200 f/28 IS II with what was once one of my favorite lenses, the Canon 200mm f/2.8 prime. The MTF graphs will show you why it isn’t my favorite anymore; the newer zoom designs are just better than this older prime lens. It’s still a good lens, but clearly not as good as the Canon zoom. (Although it may still be a better value, you can get the f/2.8 prime pretty cheap. Not to mention that it’s very small and stealthy for a 200mm lens.) 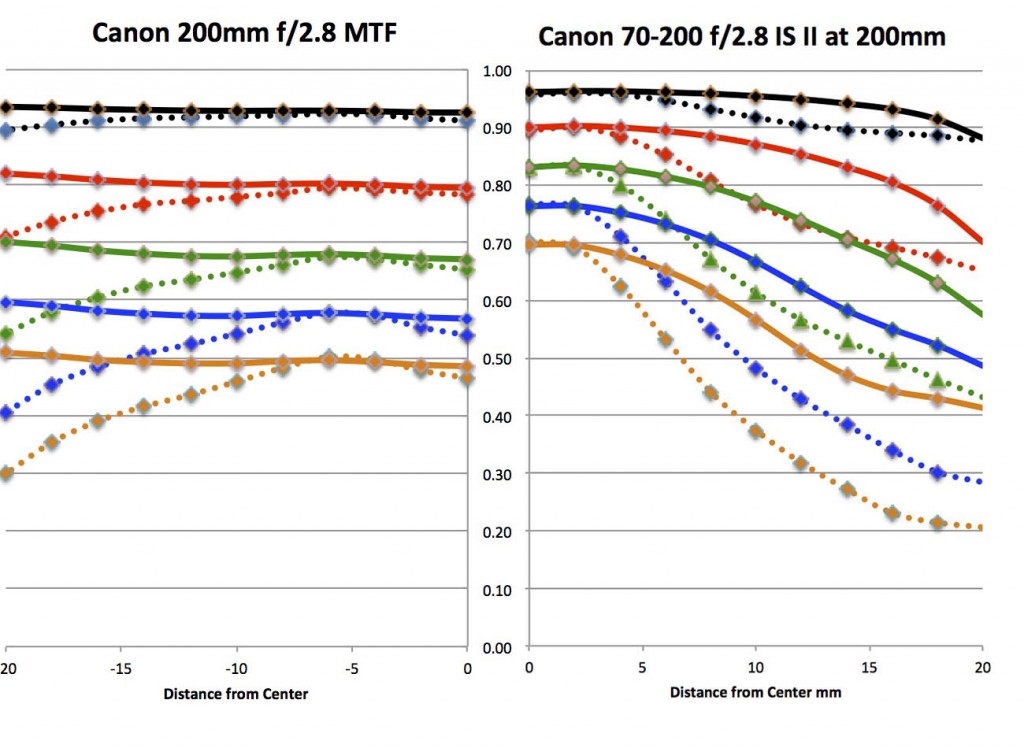 A similar comparison is the Canon IS II with the much less expensive, and still very good Canon 70-200 f/2.8 NON IS lens. 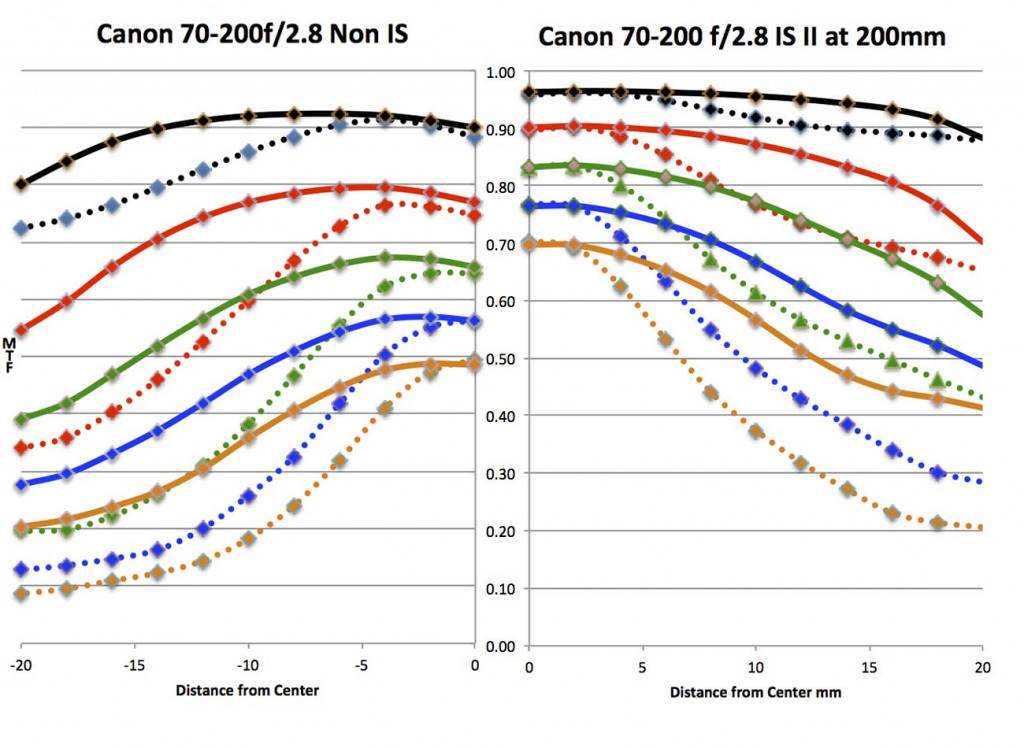 Scroll up and down and you can understand why I liked the 200mm f/2.8 rather than the non IS zoom back when the Non IS zoom was state-of-the-art. But neither can compete with the IS II zoom from a resolution standpoint.

OK, So What About Those Third-Party Zooms? 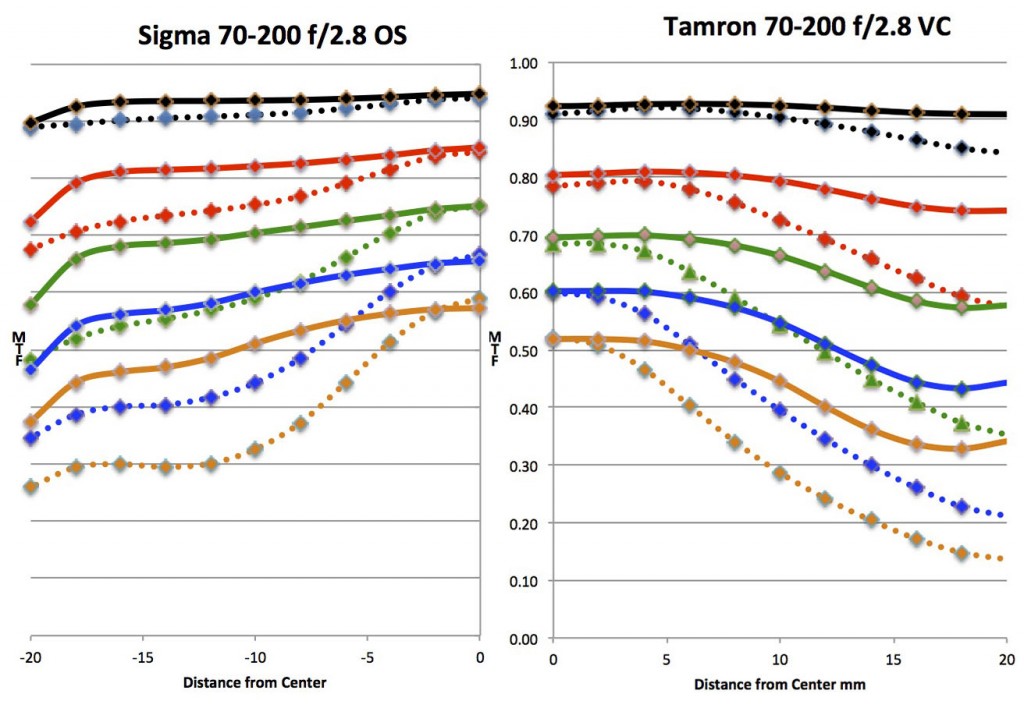 This supports what many of you already know; these are both pretty good lenses. Of the two, the Sigma is a bit better tested on the optical bench. This may not agree with what you’ve heard, but remember this is a pure test of the optics of the lenses. How well the lens autofocuses, the effects of the camera’s micro lenses and image processing, and some other factors are also going to influence performance quite a bit. Think of the optical test as ‘how good the lens could possibly be’, but realize a host of real-world factors are going to also influence ‘how good the lens was on this shot’.

Just for comparison sake, let’s look at how the Sigma fares against some of the other lenses we’ve looked at. (Sure, you can scroll back and forth, but this should make things easier.)  First we’ll compare the Sigma with the Canon 70-200 f/2.8 IS II; and the Canon is so close to the Nikon 70-200 f/2.8 VR II that you can pretty much extrapolate. 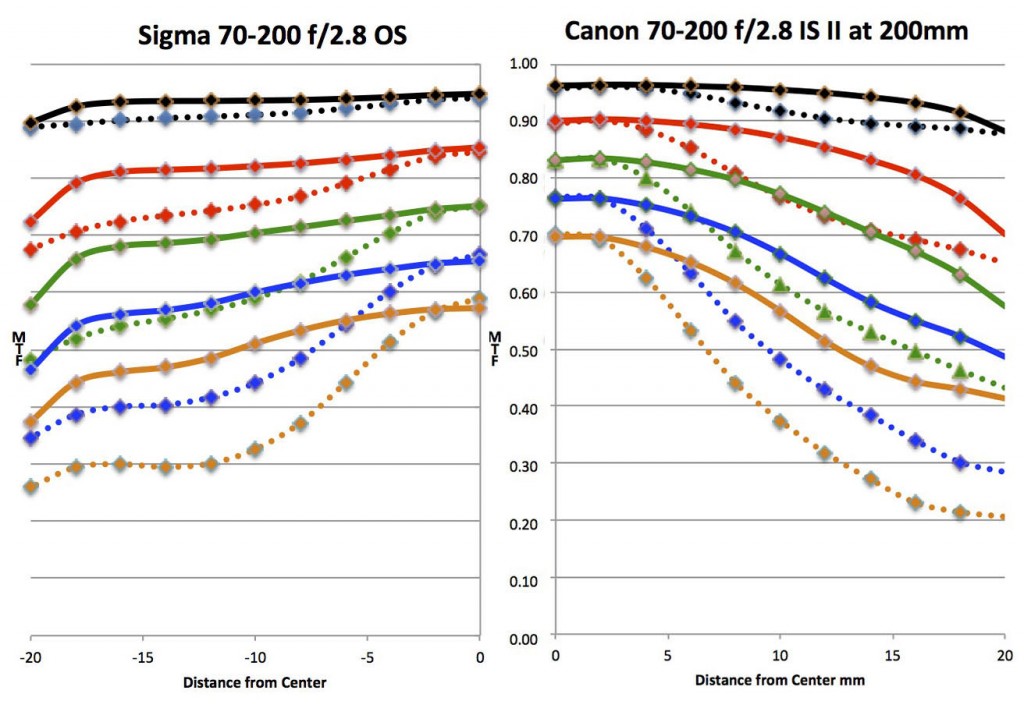 OK, the Sigma isn’t quite as good, but it’s still really good and a whole lot cheaper. Maybe a better comparison is to the Canon 70-200 f/2.8 NON IS. 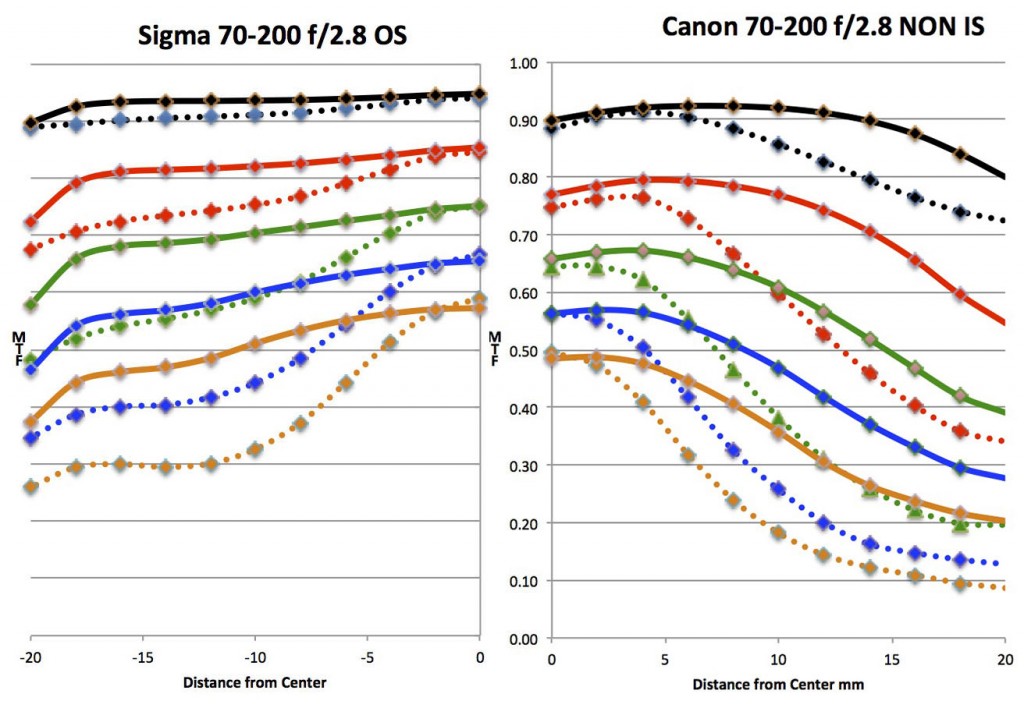 I think those two graphs sum it up nicely. The third party lenses aren’t as good as the newest Nikon and Canon zooms, but they probably are a bit better than the older models.

A Bit of Overview

A lot of people use their 70-200mm lenses largely at 200mm, so resolution at that focal length is a big factor. But there’s a lot more to choosing the proper lens for the task than resolution at 200mm, of course. In reality things like fast and accurate autofocus, especially for sports shooters, is probably more important than absolute resolution.

If one just considers price and resolution then the third party lenses, which are also image stabilized, certainly offer some advantages over the Canon NON IS lens. The Sigma price is more attractive than the Tamron and the Sigma arguably is a sharper lens in the lab. (Again, I emphasize that rapid and accurate autofocus may be more important than absolute resolution at 200mm.)

My opinion, though, is that the extra cost involved in getting the brand-name zoom lens in this category is probably worth it if you can possibly manage it. The Canon and Nikon f2.8 stabilized zooms are amazing optics. The f/2.0 primes, while wonderful lenses and even better optically than the zooms, are priced like the specialty items they are. The third-party lenses and Canon Non IS are cheaper, and probably good enough for many uses. But don’t kid yourself; they aren’t as good.

Tweet
Posted in Other
Visit Us At NAB!
Announcing C-4 Precision Optics